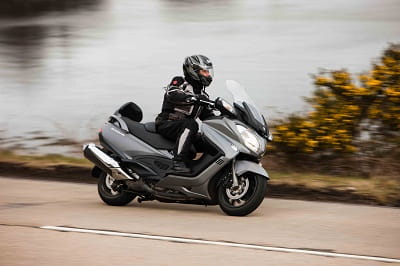 Ok, stop giggling at the back. It’s Burgman, not burgervan, and according to a chap with a Suzuki shirt on the name is to do with German mayors. Or something like that, to be honest it all got a bit confusing.

What is it with Suzuki and names? Burgman, V-Strom, Intruder, Bandit, Marauder, why can’t they come up with something that doesn’t either sound like a sexual predator or a misspelt English word? Anyway, moving swiftly onwards…

For the £8,799 price you get ABS, heated grips, rider and passenger backrests, heated seats, electrically movable mirrors, electric screen and a few other bits and bobs. Compare that to the BMW C650GT, which is £9,795 plus £750 for heated bits, and the Burgman is very competitively priced. So what’s changed?

Essentially Suzuki have tweaked an already pretty solid performer, with more than 83,000 have been sold since it was launched in 2002, it’s an important bike for Suzuki.

The parallel twin engine is the same but gets a few mods to reduce drag, plus ECU and fuel-injection changes to boost economy by a claimed 15%. That equates to a real world 50-60mpg.

The chassis has sharper geometry and altered weight distribution for better handling, the ABS is upgraded, the brake discs new and the styling tweak gives a more ‘exclusive’ look thanks to new clocks, lights and a new fairing. 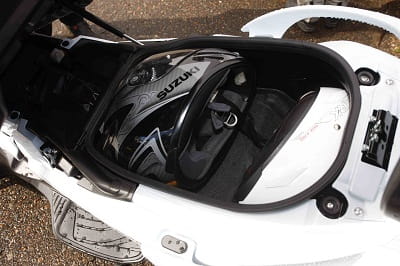 Thankfully Suzuki have basically left alone the cavernous 50-litre underseat storage (although it has lost a few litres in the update). Then there are drive modes that alter the CVT’s performance and neat touches such as the footboard cut-outs that allow shorter riders to get their feet on the ground far easier. Is it any better? Well, yes, it is.

Although, unless you are a real hardcore Burgman fan you may not spot all the differences. 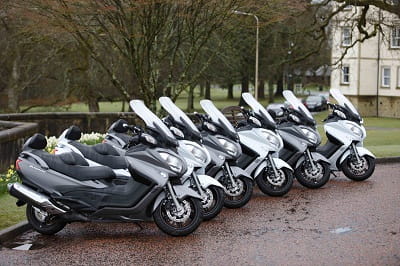 On-the-move, the new bike is sprightlier to turn but keeps the solid and plated feel of the old Burgman. To those of us unused to big scoots (that’s a large percentage of bike riders) the Burgman at first feels a bit odd due to its small wheels, however once you click it is a solid performer that handles far better than you expect.

You can chuck the Suzuki around at quite a speed and although it’s not a match for ‘conventional’ bikes, it is still pretty competent and secure feeling. The ABS works well and the traditional scooter set-up of locating both brakes levers on the bars is easy to get used to and also very useful as you can drag the rear brake into bends to steady the bike. In some ways I kind of wish my sportsbike has this feature…

On-the-go, the 638cc parallel twin engine is fast enough to top 100mph and easily overtakes rows of traffic. You can either use ‘normal’ or ‘power’ mode. For most of the ride I stuck it in ‘power’ mode. Although not actually altering the bike’s power, it changes the responsiveness of the CVT and makes the engine feel more energetic and accelerate faster. In ‘normal’ mode the throttle response is certainly less aggressive, which is better in town, however I felt the ‘power’ mode made the scooter feel more like a normal bike. There is also the option to manually select gears via buttons on the bars, something I feel is a waste of time.

As you would expect from such a machine, practicality is excellent on the Burgman. The screen is decent (as long as you are under six-foot) and the fairing is protective.

Under-the-seat you can easily house two full-face lids, while the front panel has three other storage spots, one of which is lockable and contains a 12V power supply.

Oddly enough, Suzuki reckons the future of big scooters lies both inside and outside city streets. As well as being excellent commuter tools, a lot of Europeans tour on big scooters, something us Brits are yet to catch onto. With huge storage and a relaxing engine I can see this catching on, and everyone I know who rides big scooters absolutely loves them, but you have to want to own one, which is the key. If you are after a hassle free, practical, city vehicle that can also do weekends away then the Burgman is an oddball choice that will certainly grow on you.