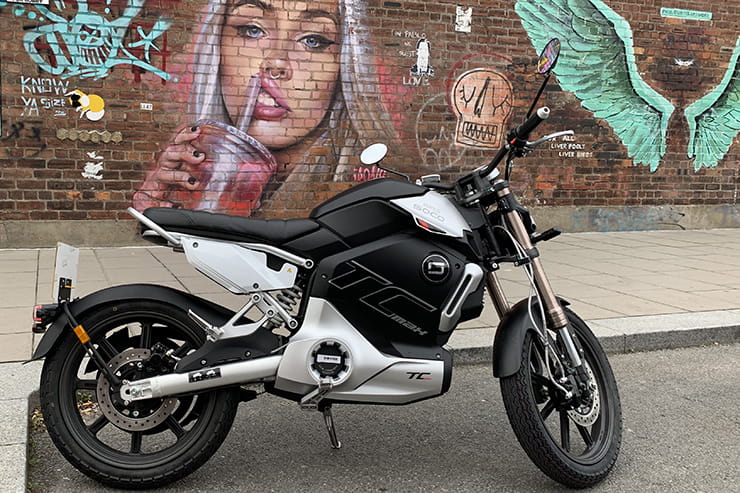 Avoid public transport, that’s the message being given out by the government, but what’s the alternative in busy city centres, particularly those with congestion and emission charges like London and Birmingham?

Electric motorcycles and scooters are great in the city, but what if you live just outside? What if you’re ‘extra urban’?  What if you don’t want to ride a bicycle 14 miles each way, every day? 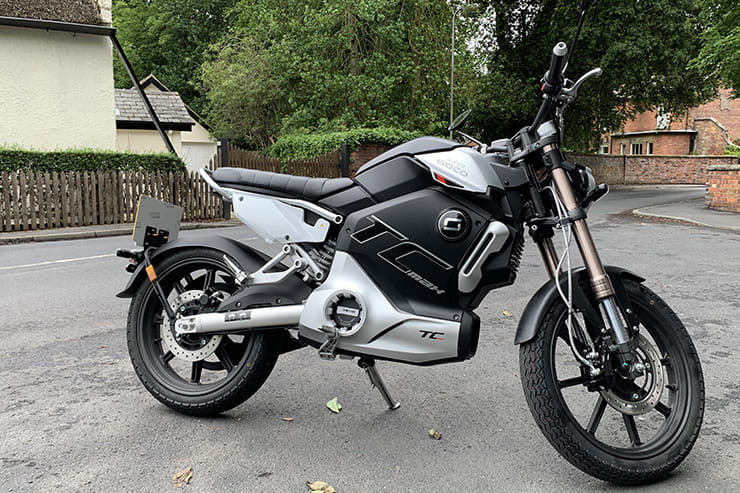 As a zero emissions vehicle, the TC Max is on the list of motorcycles that qualify for a government grant against purchase costs. So, with the Government paying 20%, the price of the TC Max is £4,249. 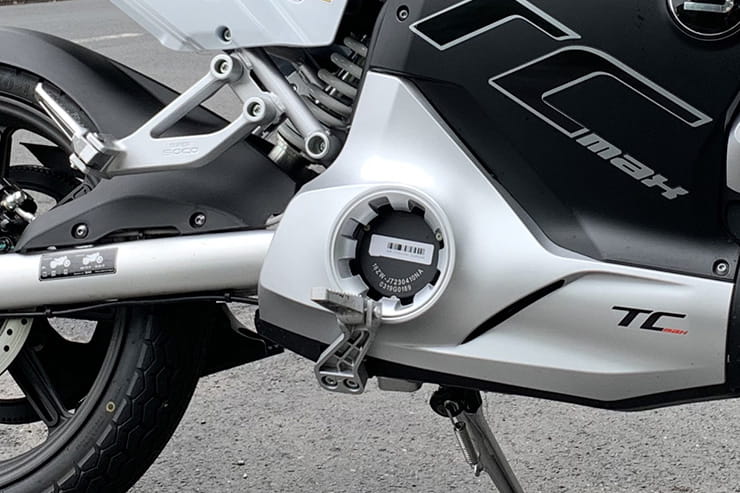 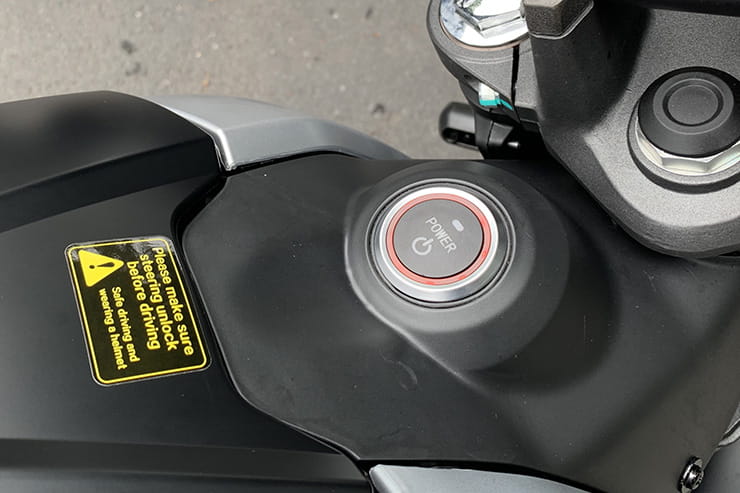 The TC Max has a mid-mounted electric motor with a rated power of 3.5kW, which is just under 5bhp, but a maximum power of 5kW, which is 6.7bhp when you open the throttle up.

That’s less than a petrol-powered 125cc, but the upside of an electric motor is that all of the claimed 180Nm of torque is available instantly. A Ducati Panigale V4 makes 124Nm. It doesn’t feel like that, but it’s enough to get away from the lights smartly and once on the move, the power available when leaving roundabouts or corners is pretty good, certainly enough for what the bike is designed for.

You can ride the Super Soco TC Max on a CBT (compulsory basic training), which typically takes a day, costs between £100 and £200, and is valid for two years. 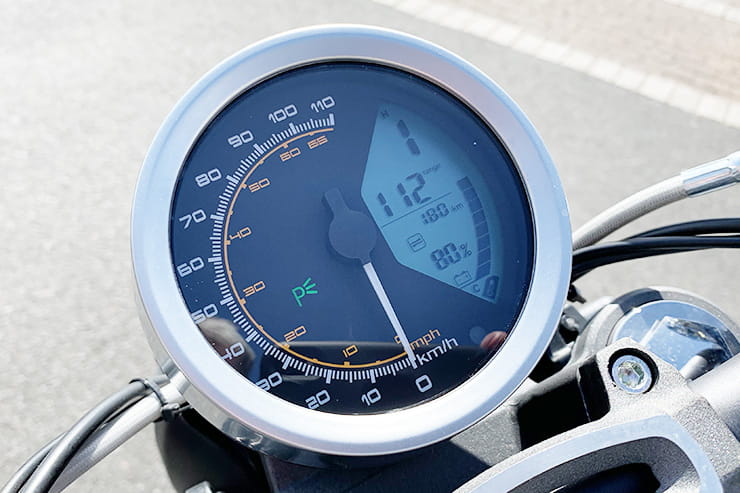 Super Soco says the TC Max has a range of 60 miles when doing 30mph, based on a rider weighing 75kg. I’m a fair bit heavier than that at 105kg and on a commute that comprised a small distance on both 60mph and 40mph dual carriageways, twisty national speed limit country lanes and then eight miles of 30mph city riding, the bike managed to do a 28-mile return journey and still have 36% percent left in the battery.

A quick calculation shows that it might have done about another 14 miles with me on it; 42 miles is pretty good for a mixed-use commute, but I did see that drop to around 35 miles on a route consisting of mainly rural 40mph-60mph speed limits.

Charging the battery is either done on the bike via a handy port on the side or, if access to power is a problem, the 20kg battery comes fitted with a handle and can be removed to be plugged in indoors.

Charging is by way of a standard three-pin plug and takes about five hours from empty; there’s no option for fast charging at a public charge point, but with the average cost of domestic electricity at around 14p per kW, 50p should see a fill up. Now think of the cost of a season ticket for the train… 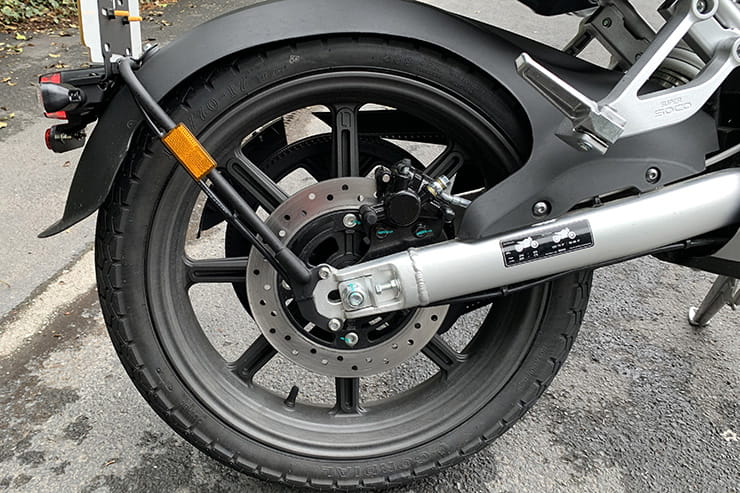 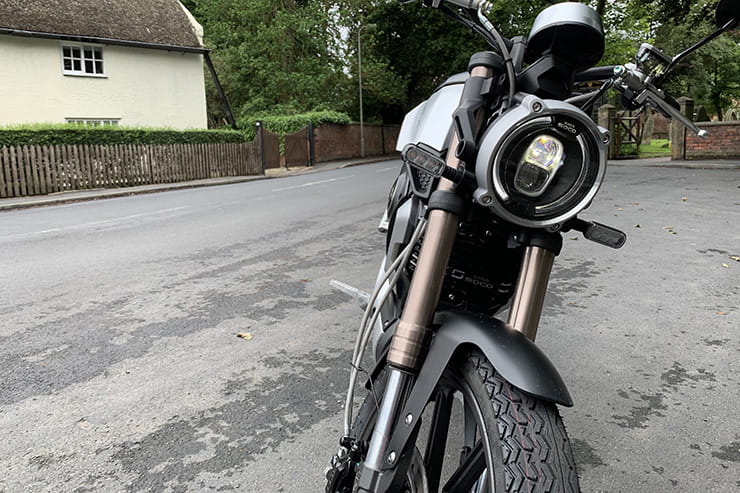 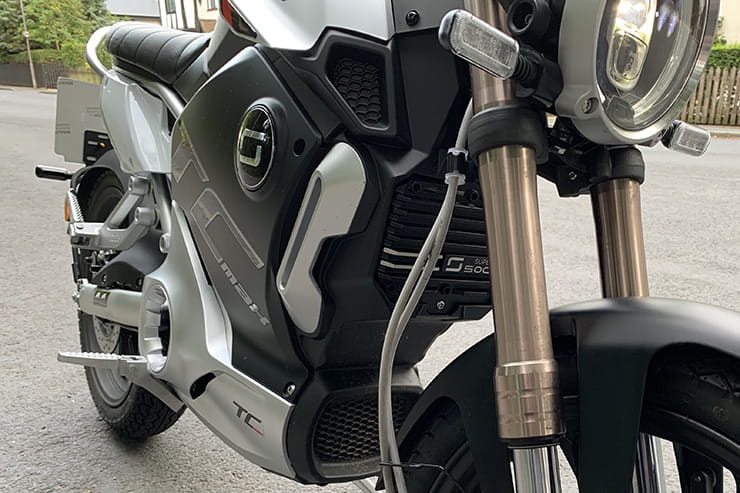 A steel cradle chassis is well hidden by the TC Max’s neo-retro styling and the bike uses 35mm upside down forks at the front with a mono shock at the rear. The upside-down forks don’t offer any adjustability, while the rear makes do with adjustable pre-load. I found the ride to be good on smooth roads but uneven surfaces and speed humps showed up the suspension’s limitations and the ride could be jarring.

That said, out on some twisty national speed limit roads the pluses that come with 17” wheels shone through and it handled just fine; I was able to hold a line through the twisty sections. While the limited power on tap for the exit of a corner meant that the Super Soco wasn’t going to be overcome, the torque delivery still enabled smooth progress. With alloy wheels on this bike (spoked wheels are an option), the whole thing weighs in at around 100kg, which makes it very nimble and easy to handle around town – tight U-turns are an absolute breeze. 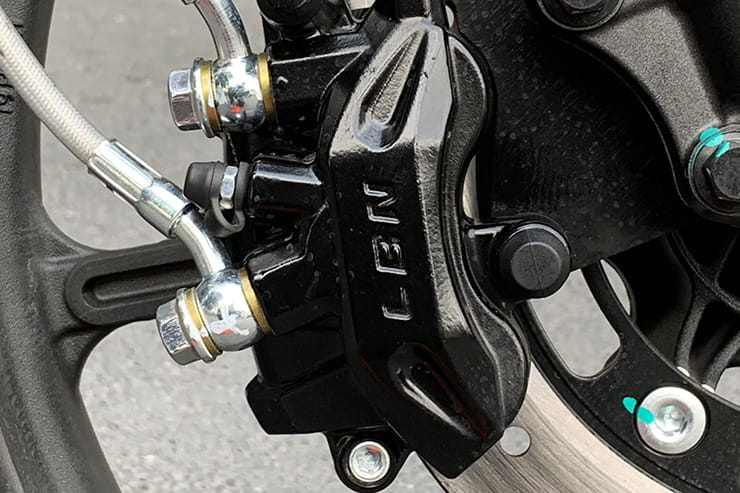 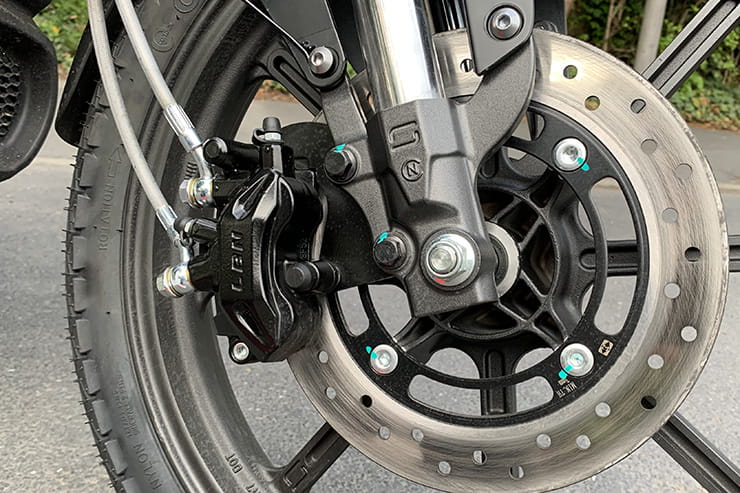 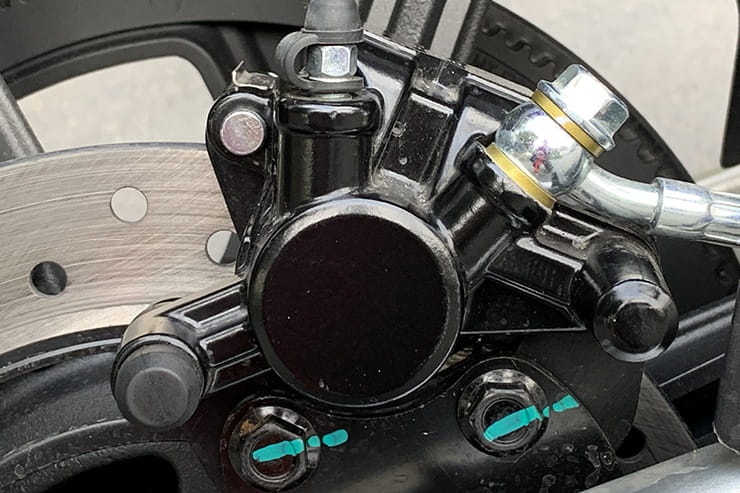 There’s a single 240mm disc up front and the same at the rear. There’s no ABS, but the brakes are linked, so pressure on either will activate the other to a degree. In heavy braking at 30 mph on a dry road they pulled me up well without drama. 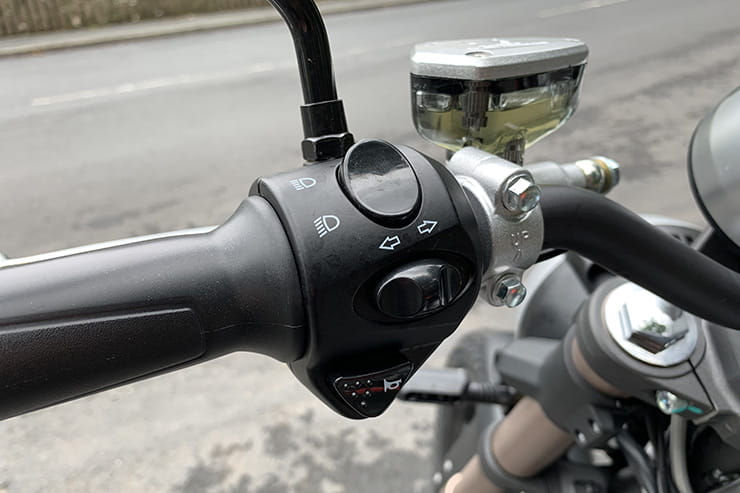 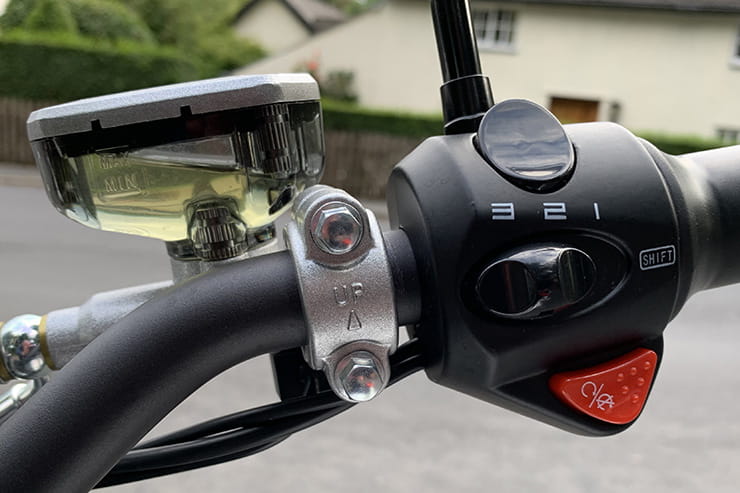 This is a bike built for an extra-urban commute, which for me was about 14 miles. I did do a couple of rides of 30 miles plus, and despite my 6’2” height and the bike’s 770mm seat height, my legs never felt cramped.

It’s easy to find a nice seating position on the bench seat, meaning the reach to the handlebars enables a nice upright position.

This is a naked bike, so if you want to stay dry in the rain, you’ll need some waterproof kit or an oversuit. Traditional scooters score here with many having the option of a skirt to cover your lower half. 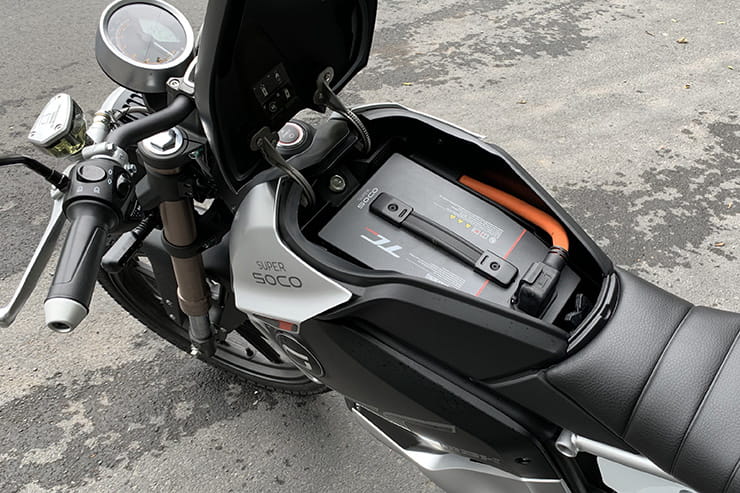 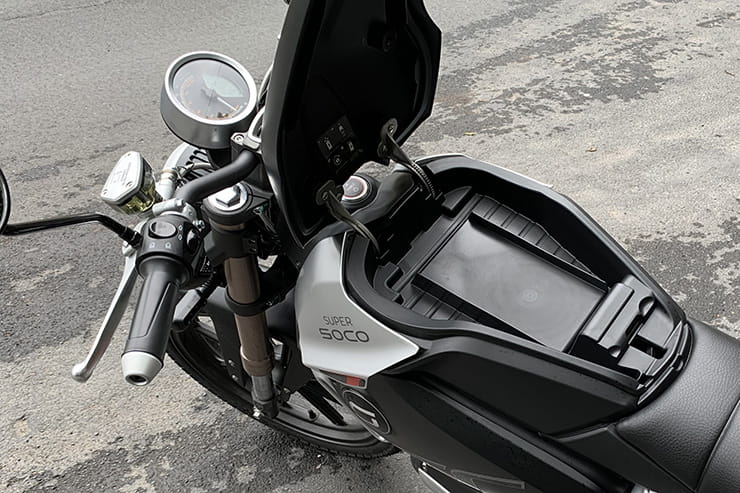 With the battery charger in place, there’s no storage, though take it out and you should be able to get a lock in there

Due to the size of the battery, there’s only a small amount of storage and the charger takes that up if you’re planning on taking it with you. There’s probably enough room for a U-lock or decent disc lock without the charger, and although the bike comes with an alarm it’s not very loud, so I’d also look at having a security marking kit like Datatag and a tracker fitted. 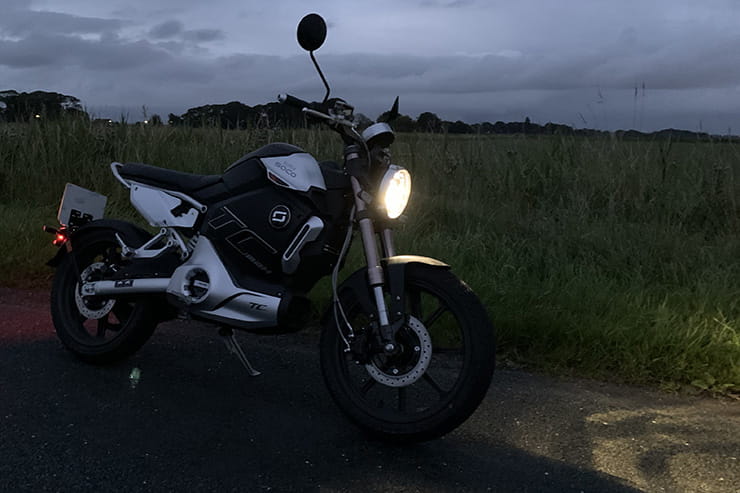 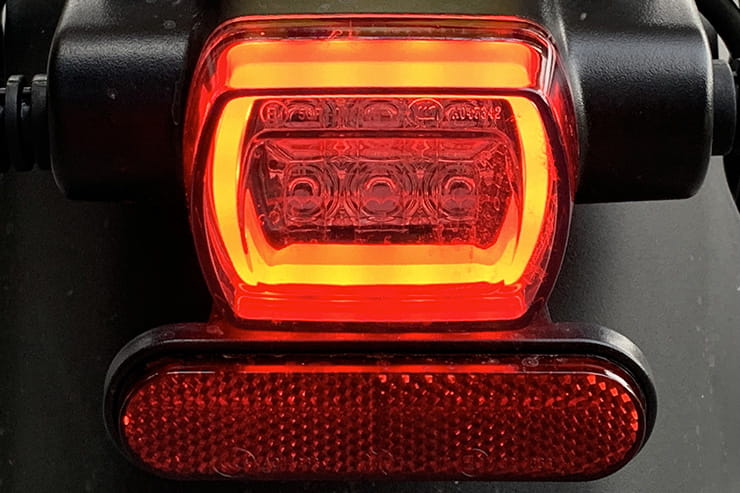 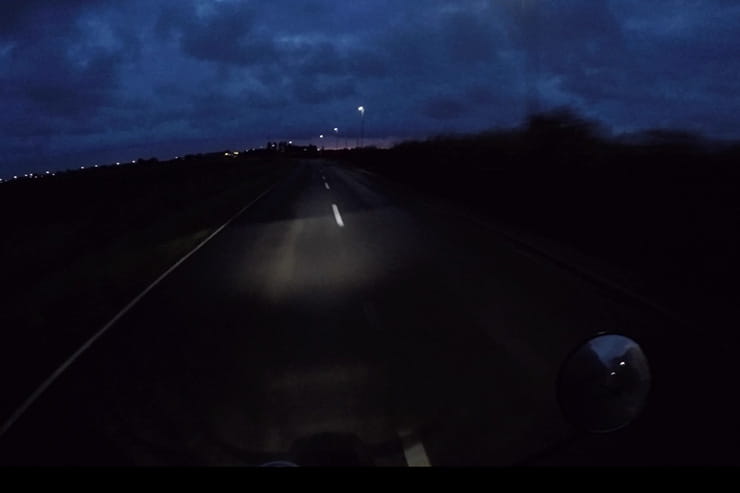 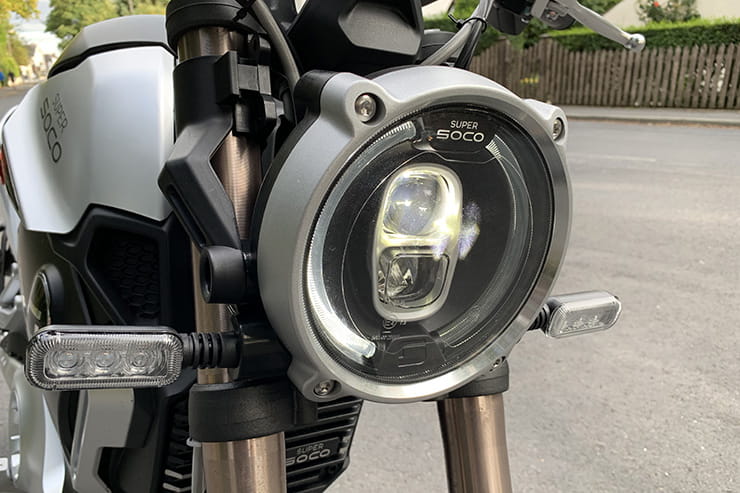 The light looks good, but it’s not that bright

The instrument panel is a single round unit comprising a mixture of analogue speedo in kmh and mph, along with an LCD panel showing the power mode, range, trip meter, and amount of battery left in both numerials and as a sliding bar. It’s easy to read and has automatic backlighting when darkness comes.

There are three power modes to choose from; level one restricts speed to around 30 mph, although you get full acceleration, level two to an indicated 45mph, while level three unleashes the full beast.

Those modes are switchable on the move; flow with the traffic, getting maximum range in level one at 30mph in town, then shift up a mode or two for the short dual carriageway section.

The headlight, rear light and indicators are all LED but bright and good looking as it is, the headlight didn’t have the best spread or reach in areas without streetlighting 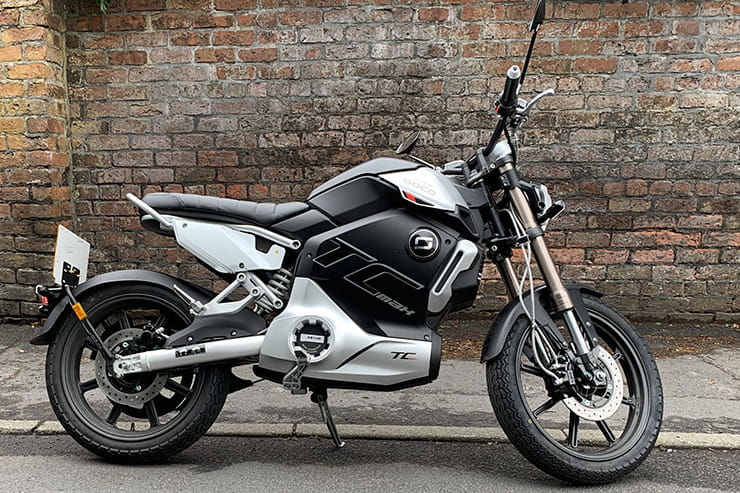 The TC Max has the ability to tackle a longer commute, with enough push from the small electric motor to make it enjoyable, even if the journey includes small sections of faster roads. Light and agile, the TC Max is also easy to manoeuvre around and most importantly, it’s quicker and much more enjoyable than public transport. Who thought social distancing could be this enjoyable?

Looking for motorcycle, scooter or moped insurance? Get a quote for this machine with Bennetts bike, moped and scooter insurance