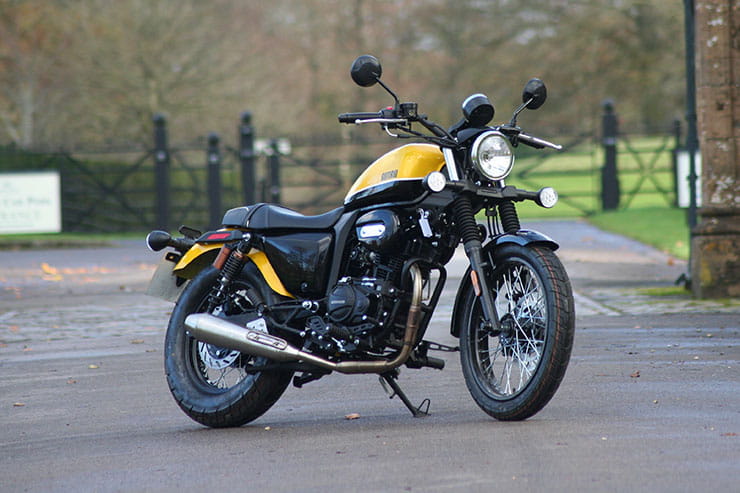 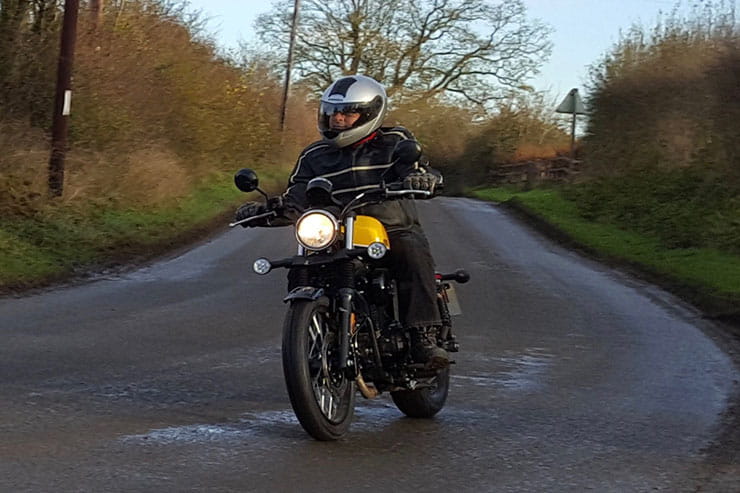 125cc cruisers have always seemed a bit ersatz to me – learner bikes masquerading as big, rumbly V-twins, yet plenty disagree because these little laidback bikes have long been good sellers. They offer a bit of style and glam combined with cheap 125cc running costs and A1 licence compatibility, not to mention a lower seat than the average 125. The Sinnis Outlaw is typical of the breed and certainly looks the part, but does that make it worth buying?

Most 125cc cruisers are in the £2600-£2700 range, and the Outlaw is no exception at £2699. You'll have to add on-the-road costs to that, but these are still good value machines... except that Sinnis also offers the all-black Hoodlum cruiser at £2399 and Lexmoto's bargain basement ZSB is just £1799. The Lexmoto is a bit 'cruiser-lite' compared to the others, but you can't argue with a saving of £800. If you want to spend more, the Hyosung Aquilia is an upmarket 125 with liquid-cooled V-twin and a price tag just short of £3600. 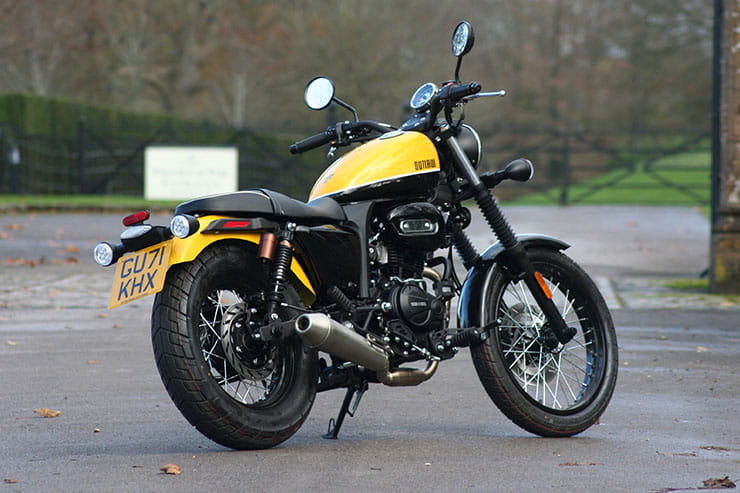 Let's get first impressions out the way, erm, first. The Outlaw was the smoothest 125 I've ever ridden. Certainly through town keeping the revs down, it glides along without a tremor, and although some vibes do come in at higher revs, it comes across as very quiet and refined. If you're looking to make a statement, then maybe that's not what you want, but it's all very restful.

This is a 125 mustering 10.1bhp and 9Nm so it's not as quick as some 125s. The Outlaw easily keeps up with urban traffic up to around 40mph, with slower acceleration up to 50mph-plus. It is actually slower than some 125s flat out, able to just about hold an indicated sixty on the flat, but soon knocked back by any headwind or hill. The test bike had less than 100 miles showing, so it could well loosen up a bit over time. Either way, it didn't feel buzzy and distressed at speed, with just a few vibes coming through the bars at high revs until an ignition cut out told me it was time to change up.

Other than that, the Outlaw is easy to ride, with a light clutch and positive, foolproof gearchange (with indicator), which is just how an A1 125 should be. 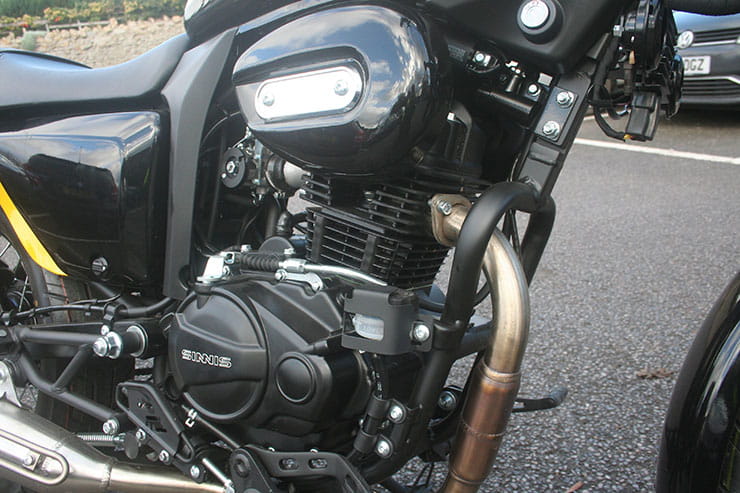 No surprises, because at this price you get a simple two-valve air-cooled motor based on Japanese technology from around 30 years ago. They all have fuel injection now, to meet emissions legislation, and some even sport a balance shaft, but it's all fairly basic stuff. And so it is with the Sinnis, with its SOHC 125cc single and five-speed gearbox. Basic, but it does the job and couldn't be more proven.

Now according to the Sinnis website the Outlaw has a fuel consumption meter. If there is, I couldn't find it, but a quick manual check showed 104.5mpg over a mix of town, dual-carriageway, and slower B roads. Not everyone will get that, but if you do, the Outlaw's 13-litre would give a 250-mile range at least – plenty for crossing the Australian Outback (or at at least a fortnight's commuting). No doubt about it, geared 125s are the most efficient petrol-powered vehicles on the planet. 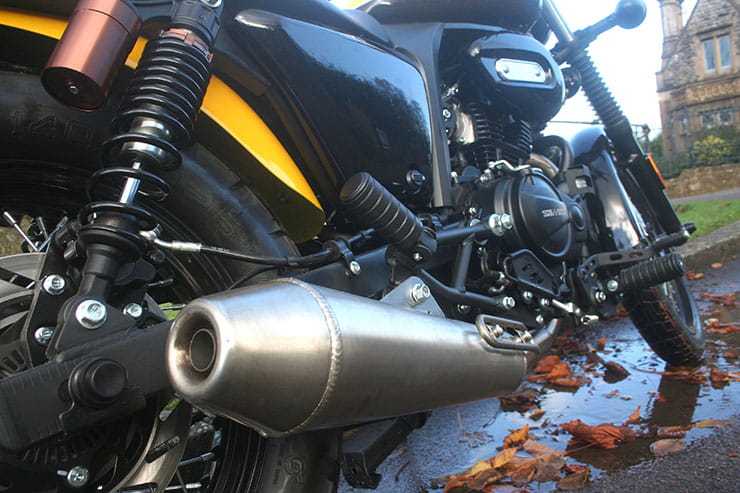 The Sinnis Outlaw, “cranks it up a notch when the roads open up and get twisty,” according to the publicity. I don't know about that, but it all feels competent enough by 125 standards. The steering is light and the bike weighs just 141kg, so it's easy to tip into corners and feels nicely planted once heeled over, the Chen Shing tyres doing a good job. They are a bit sensitive in a straight line to longitudinal grooves in the tarmac, maybe because the rear is a fat 140-section job, but it's nothing very scary.

Given the Outlaw's relatively budget price, the suspension is strictly tourist class, though the metallic bronze remote reservoirs for the rear shocks are quite flash. There's no adjustment at either end apart from rear pre-load, but both forks and shocks are well damped and do the job. The forks even have gaiters, which can be seen as a styling bonus (slightly retro, more black) or a dose of practicality, protecting the forks from winter salt. 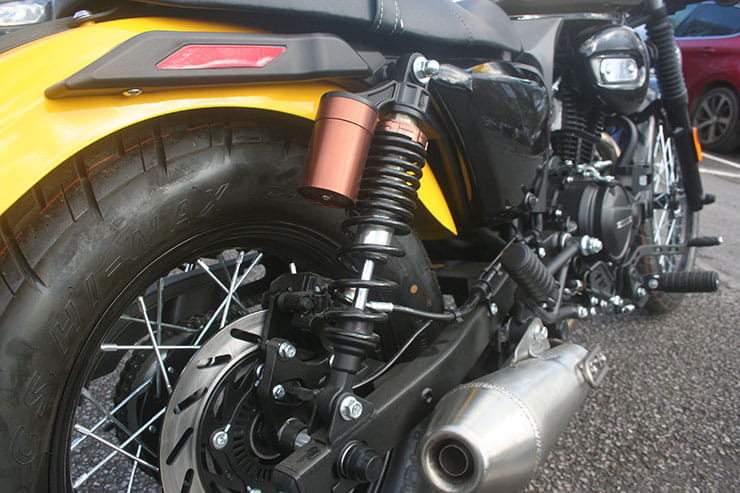 All A1-compliant 125s without ABS now have linked brakes, the pedal operating both front and rear discs and the handlebar lever bringing in extra oomph on the front only. The Outlaw's linked set up was a bit weak, needing a strong push on the pedal for a hard stop. That meant they wouldn't lock up, which is a good idea for learners (or come to that, most of us) but for emergencies the handlebar lever was needed as well – do that, and the stops are swift and secure.

Good news here. The Outlaw has a very comfy seat, which at 720mm is also low enough for most of us to get both feet flat on the ground. The riding position isn't cruiser-extreme, with widish bars and slightly kicked-out footrests. In fact, what with that and the smooth motor, I could imagine touring on one of these, given gentle weather and the right roads. Any pillions won't be so happy though because they just get a small portion of seat which slopes backwards and have nothing to hang onto apart from a grab strap. The seat looks great, but if you regularly take a passenger, buy something else. 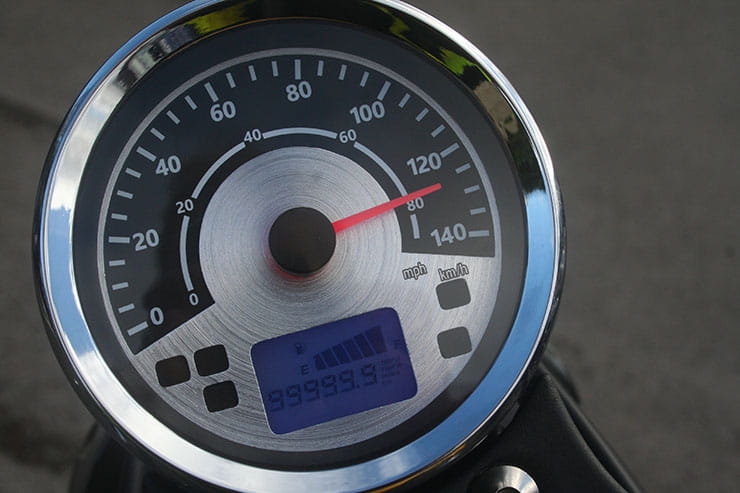 At this price, it's easier to point out what you don't get than what you do, but the Outlaw's basic spec reflects the tag. Security is limited to a steering lock (no fancy apps, alarms or immobilisers) – it actually harks back to the 1970s, with a separate slot in the steering head which you can forget about, start up and find that the steering is still locked. The single speedo is quite smart with its brushed alloy face but surely the Chinese sell enough UK market 125s to give us big mph figures? There's a tiny fuel gauge and a tripmeter, but that's it for instrumentation. And if you get freaked by red warning lights then steer clear, because the Outlaw's gear indicators are all that colour. The LED indicators and rear light are nice touches though, as is the stainless-steel exhaust. You also get a two-year warranty, though the second year is parts only.

We've left one of the Outlaw's best points until last. It really does look the business in bright yellow and black, with the fat rear tyre, low stance and gaitered forks all adding up to a purposeful look, lower and meaner than other 125cc cruisers. It might not be a big V-twin, but looks as though it will be one day. 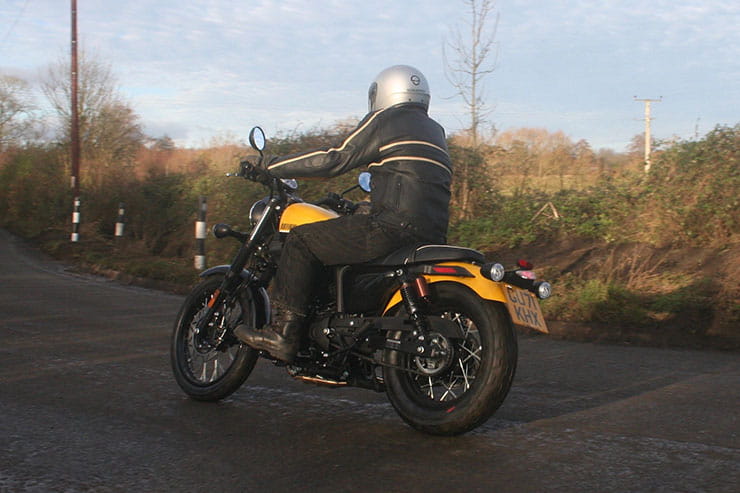 I liked the Outlaw. It really looks the part without being over the top and has all the usual 125 qualities – easy to ride, fast enough in town and with the promise of dirt-cheap running costs. It's not the quickest 125 and there are cheaper options if you're willing to sacrifice a bit of style, but isn't that always the way? 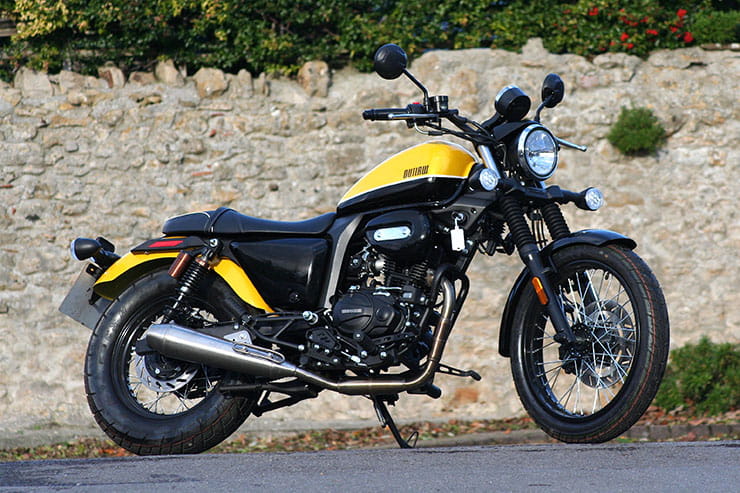