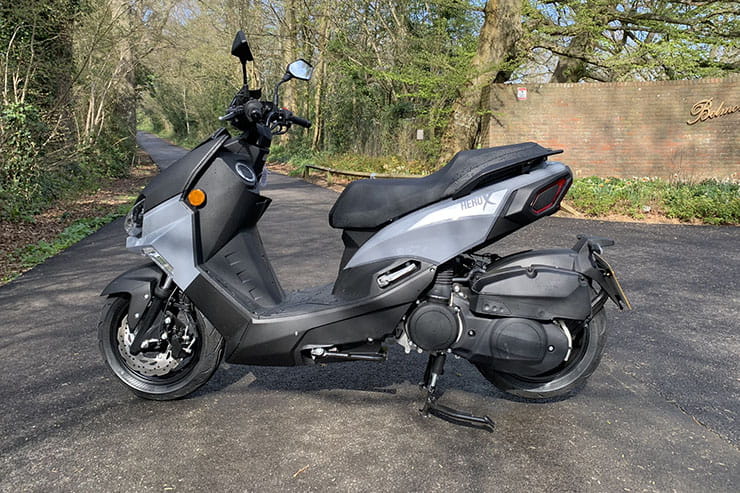 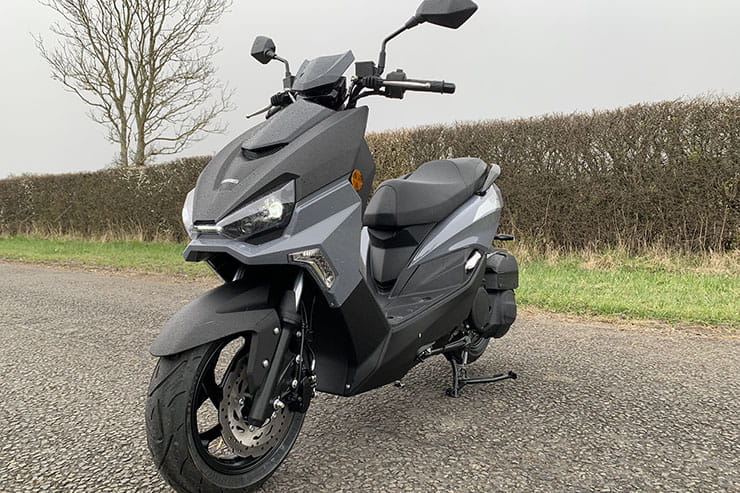 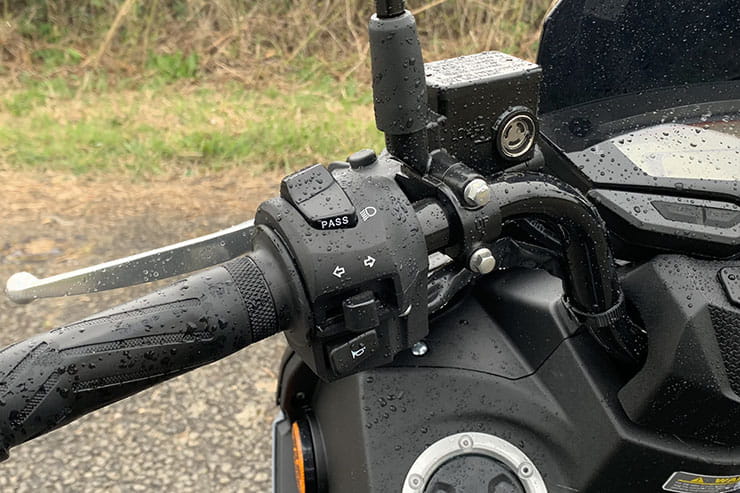 Verdict: The 2022 Hero-X feels like a big step up for Sinnis scooters. First impressions are of a jump in build quality and finish. Well-equipped for the price, roomy enough for six-footers and Sinnis offers a two-year warranty and 12 month’s breakdown recovery. The new liquid-cooled engine is smoother and quieter than the old air-cooled units, but has a lot of throttle slack before the power comes in and feels no faster. 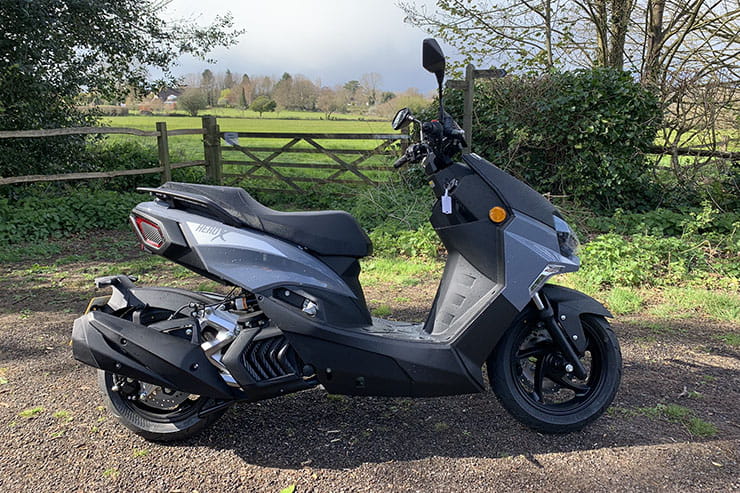 Styling is more aggressive than Honda’s PCX or Yamaha’s NMax. It looks great in the flesh

£2899 on the road is more than £650 less than a Honda PCX125 and £530 less than Yamaha’s NMax 125. That’s a big enough saving to pay for your helmet, riding kit and security (probably). The independent importers of Chinese bikes can’t always offer the same tempting PCP finance deals as Honda, Piaggio and Yamaha, but your local dealer can usually offer some kind of finance.  Expect to pay somewhere around £100 per month over three years at current interest rates (March 2022).

The bigger issue still affecting many Chinese models is depreciation. In part it’s because the models change so quickly that dealers lack confidence taking a Chinese bike in part-exchange because they don’t know what it might sell for and so are tempted to bid low. This is starting to change because demand for 125cc scooters is outstripping supply right now and dealers are prepared to take a chance.

Plus, as the quality of Chinese bikes improves, they hold their value better on the private used market. If you’re going to be keeping your bike a while and doing plenty of miles none of the above matters too much because you’ll get the value out of it. 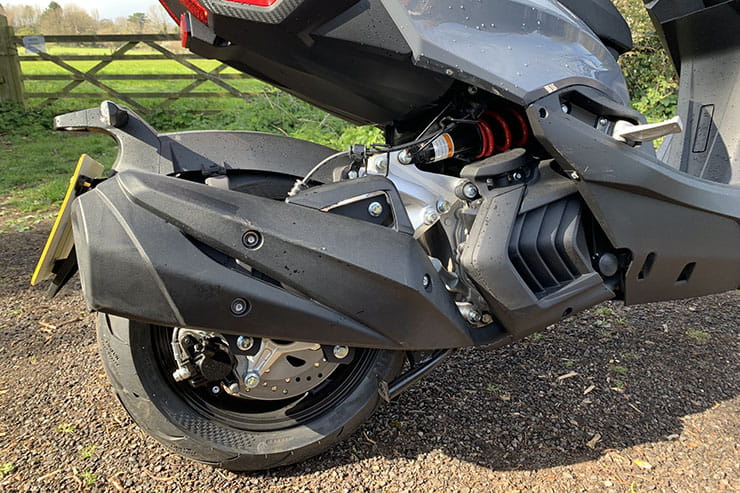 Liquid-cooled single-cylinder engine is smooth, quiet and should be quick enough once bedded-in. Ours was brand new and still a bit tight.

The 2022 Hero X uses a new liquid-cooled 125cc engine. Learner restrictions limit the power output to below 14bhp and the Zero’s engine claims 11.4bhp. Our test bike was brand new, showing just two miles on the clock and so the engine wasn’t properly bedded-in. This might explain why it felt a sluggish, not being as nippy when accelerating as we’d expect and struggling to reach the claimed 55mph top speed.

Most engines need a few hundred miles to loosen-up properly and I’d expect that once past its first service the Zero-X will pull away with a bit more zip and cruise at 50mph+ more readily. Our test bike was happiest at around 45-50mph and was hindered by there being a lot of slack in the throttle needing almost a quarter turn before the power engaged the auto-transmission.

This means that your wrist runs out of twist before the bike is on full throttle and you need a second grab at it. I suspect this is something that can be adjusted at the first service and it’s not a bad thing to give a novice rider a bit of a safety net in the way the power comes in.

Our brand-new, still-tight test bike averaged 95mpg which is good enough, but I suspect it will improve once the engine loosens up and 100mpg should be possible. That should give a fuel range of around 150 miles from the seven-litre tank. 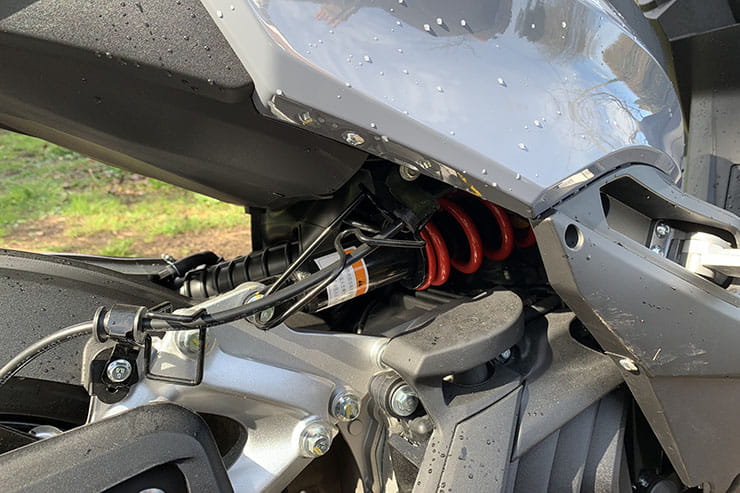 Suspension is firm enough to keep control in corners and flicking through roundabouts but soaks up the bumps well too.

Scooter handling isn’t like a bigger bike. Scooters generally aren’t bought to scorch around corners at impossible lean angles, it’s more about mixing agility to flick through traffic in town with stability at cruising speed. Suspension quality matters when most of the roads you ride are cratered by potholes and weight is important because the more you have, the harder your 11.4bhp has to work to accelerate. At 146kg the Zero-X is 15kg heavier than Yamaha’s NMax 125 and Honda’s PCX125. That’s like carrying a couple of small Jack Russells in your top box.

The suspension does a good job of soaking up the bumps in town and keeps the Hero-X under control as you flick left-and-right through mini-roundabouts. It also keeps the Sinnis stable when you brake hard where the front end of some bikes dive too readily making them feel unstable. 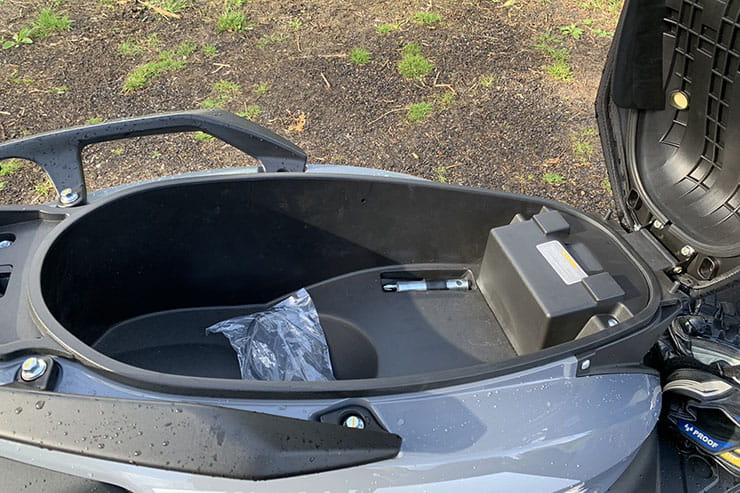 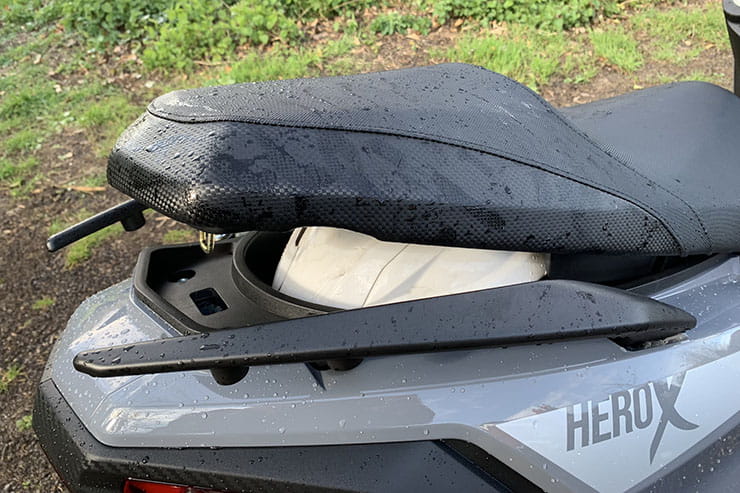 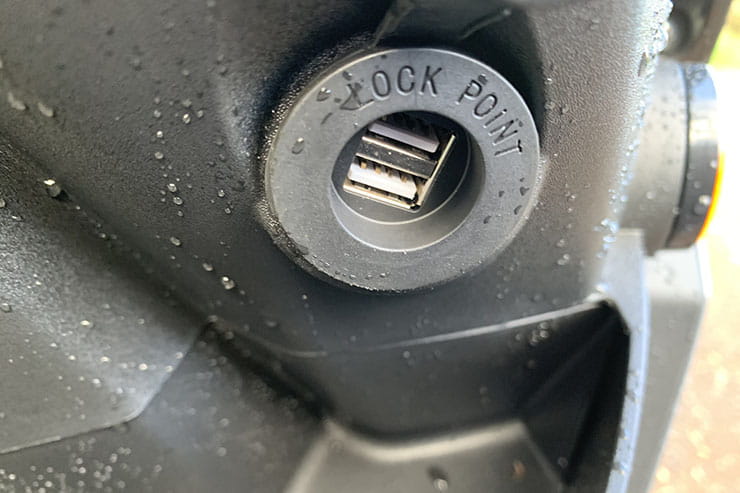 Storage under the seat is ok…until you try and store a full-face helmet. USB port is useful though.

The Hero-X looks small and compact from most angles, but the seat is taller than you first think. At six foot I could get both feet flat on the floor. The step-through design makes it easy for shorter riders to get on and off and manage at a standstill. Once aboard, with my feet flat on the footboards, it feels cramped. Stretching out so my feet were against the fairing gave enough room – it wasn’t uncomfortable, but I expected more room.

The seat is well-padded and comfortable, mirrors are clear and give a good view behind and the layout of the switches is logical and easy to use. LED lighting is a neat touch too.

Sinnis claim class-leading space under the seat, but I guess it must be the ‘scooters made by Sinnis called the Hero-X’ class because other scoots have more. I couldn’t get close to getting my Shoei GT-Air 2 helmet under the seat. The Shoei is a typical modern full-face helmet with vents and while you might get an open face helmet under there, not everyone uses open-face.

Finding insurance for Chinese bikes sometimes needs some patience. Not every underwriter (the people who actually insure your bike) understands the market equally so find a specialist motorcycle broker (the people you deal with to buy insurance) who will fight your corner and push the underwriter for a competitive quote 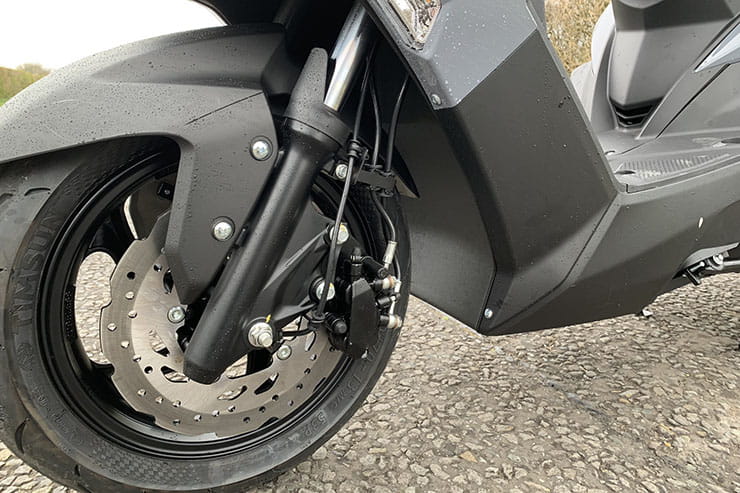 Front and rear brakes are linked. Pushing the foot pedal operates 30% of the front brake’s power. Front disc doesn’t take a disc lock which is annoying

It took around 20 miles for the brand-new brake pads to bed-in properly on our bike. Until then it needed a good tug to stop quickly although just shedding speed in traffic felt easy and well-controlled. Small bikes (125cc or less) aren’t required to have ABS and many link their brakes instead. Pulling the handlebar lever operates two of the three pistons in the front brake while pressing the foot pedal operates the back brake and the third piston in the front brake.

There’s enough power in just the front brake for most situations, just shedding a bit of speed in traffic. Using both brings more power and less dive at the front of the bike. The rear brake on its own is useful for gentle speed corrections while filtering in traffic when you need your right hand on the throttle.

One issue with small scooter wheels is that the brake discs don’t have big enough holes in them to use a disc lock as security. Scooters can all be tricky for this so take your bike along to the dealer when buying security to ensure it fits. 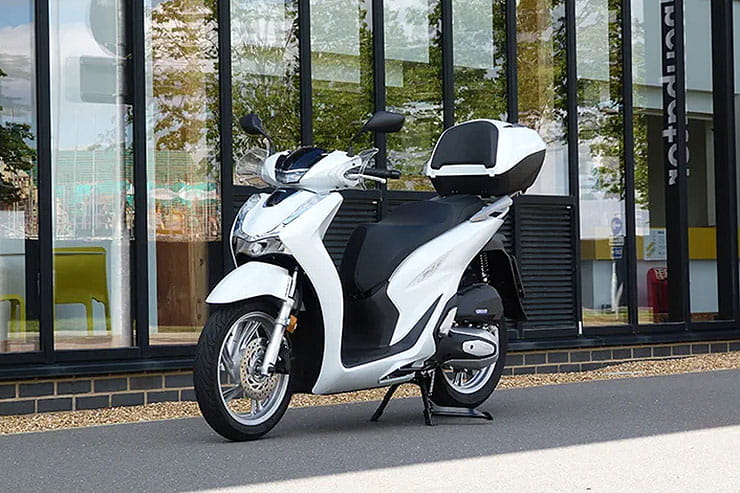 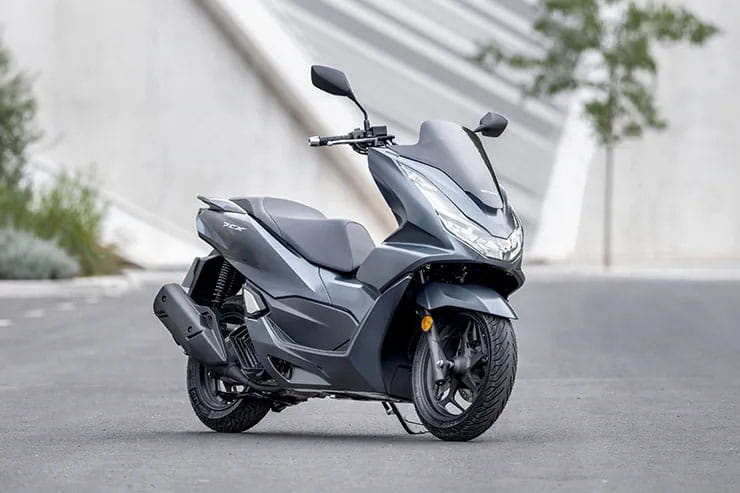 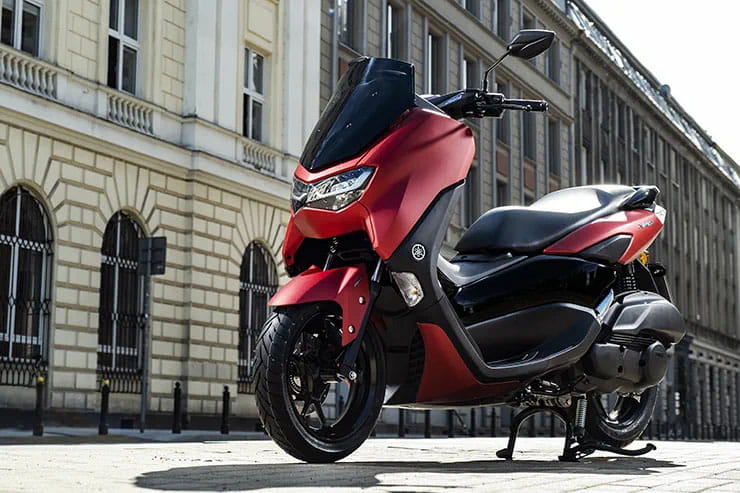 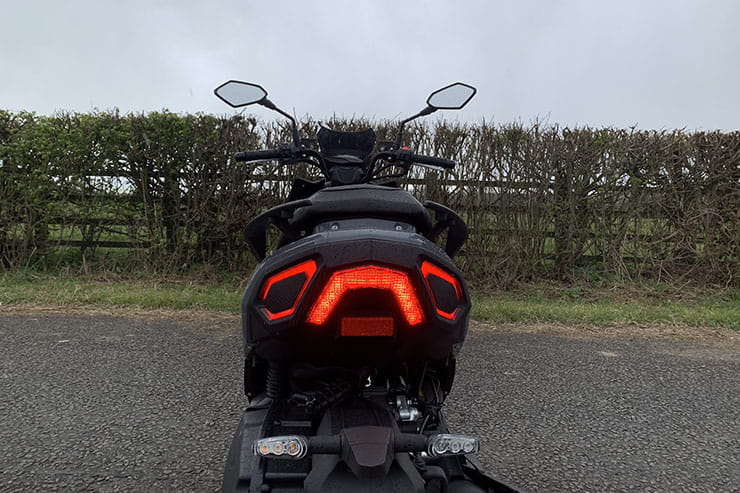 The 2022 Hero-X represents a sizeable step-up in quality for Sinnis. From the switchgear to the panel fit and instrument design, everything is pretty much on a par with its Japanese competition. The new liquid-cooled motor is quiet but lacks acceleration and the top speeds of Honda’s PCX125, SH125 or Yamaha’s NMax125. List price is very competitive though and if Sinnis get enough bikes to enough dealers they could easily grab a few Honda or Yamaha customers not wanting to pay a premium over list price for a used scooter because of short supplies. 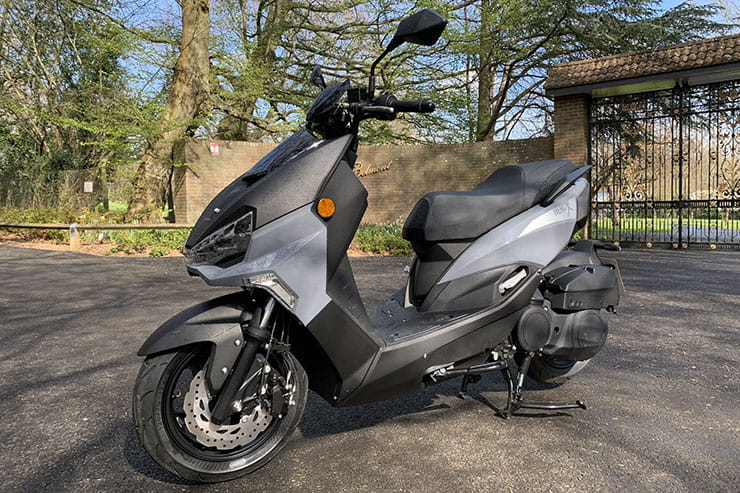 Sinnis’ best built scooter to date by some margin. And still £500 cheaper than the Japanese competition. 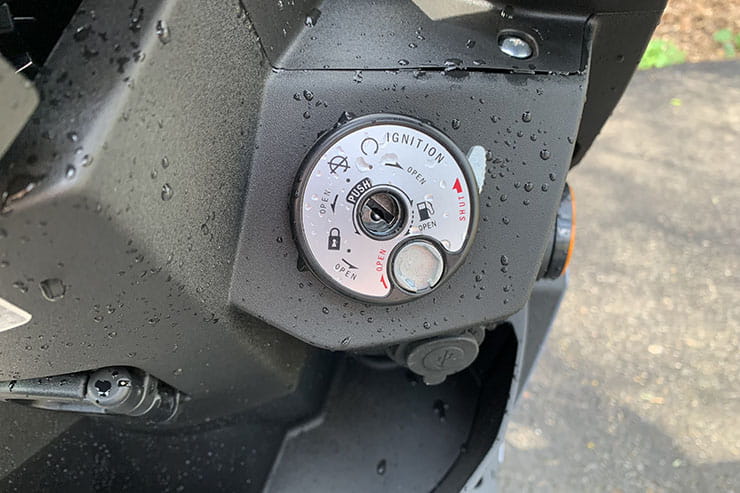