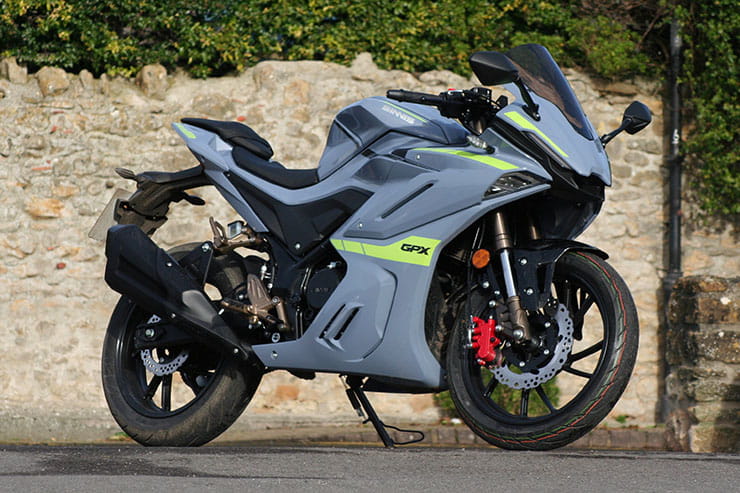 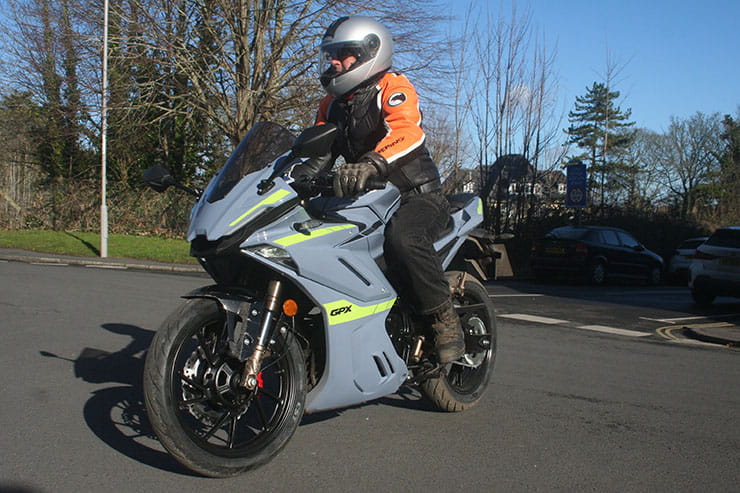 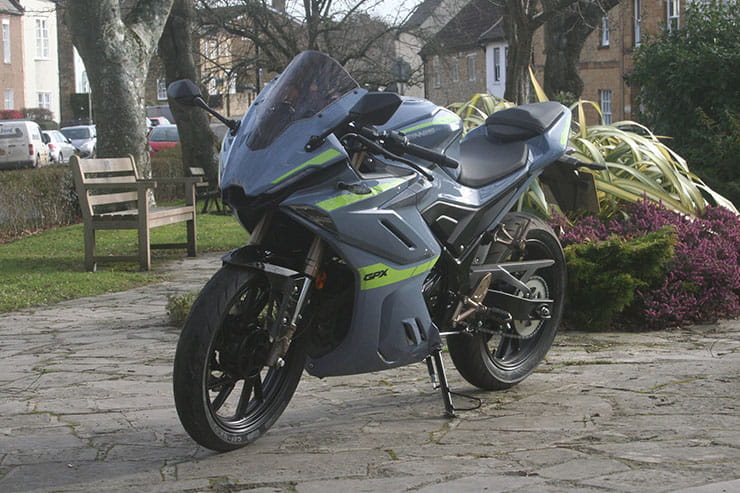 125cc sports bikes have a tightrope to walk. To have any chance of reasonable sales, they have to be A1-compliant, which means restricting power to 15bhp and keeping the price down to appeal to learners. On the other hand, they also have to have real sports bike attitude, looking as if there's a 750cc four lurking underneath the full fairing, not a restricted 125. And no doubt about it, the Sinnis GPX, which went on sale in February 2022, has that attitude. It's physically big for a 125 and shouts all the right styling cues for a sports bike: sharp looking fairing with LED headlights, nose down, rear up stance, USD forks and red brake calipers (because these things matter). So, it looks the part, but is it worth buying? 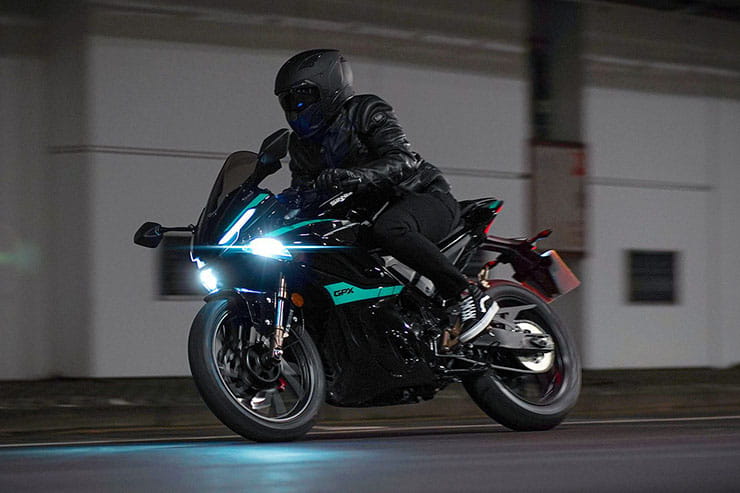 The GPX125 is available in two colours, either Carbon Black or this, Ultimate Grey.

The GPX might look just like a much bigger bike, but that illusion is soon dispelled when you fire it up for the first time – the note through the matt black pipe is pure 125cc single, which even with DOHC and four valves still sounds like the tiddler it is. With 12bhp at 9500rpm, it's among the upper midrange 125s – not on par with the 15bhp Japanese-badged premium bikes, but well up on the budget jobs with less than 10bhp.  Being restricted, power and torque delivery feels fairly flat from 4000rpm up to the red line at 9500 and on top of that the motor felt harsh and buzzy (though the test bike had only 40 miles on the clock), starting to smooth out over 8000.

Having said all, that, the Sinnis is easily fast enough to keep up with main road traffic, with decent acceleration and easy 60mph cruising on the flat – the help of a slight downgrade saw it creep up to an indicated 70-72mph.

If you insist, it will carry on revving past the nominal red line until the rev limiter finally cuts in at 11,000rpm. It's no faster than changing up earlier, but part of the experience and all quite exciting, as long as you don't attempt many overtakes. Or for that matter, try to accelerate out of 30 limits, because the GPX (like other 125s) won't do that with any urgency – change down a couple of gears, and things start to happen. 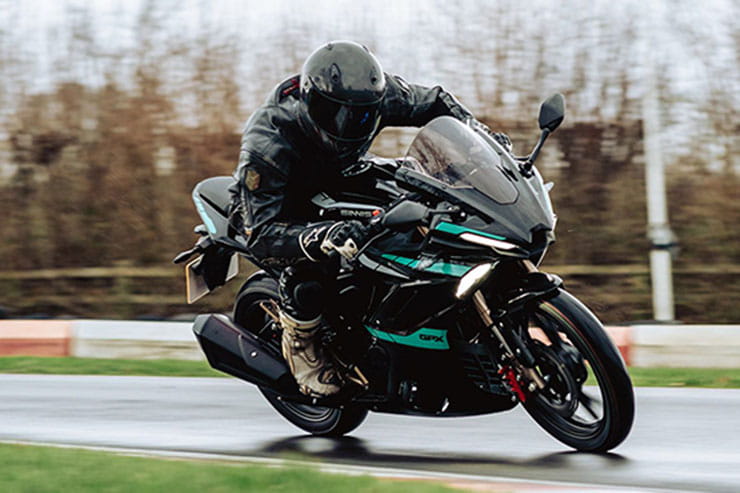 For showroom bragging rights on the engine, the Sinnis does pretty well. It's liquid-cooled with a DOHC head and four valves, the same 'must have' items as the Japanese big four. There's less power, but it's still good to have them. The motor works with a smooth, positive six-speed gearbox and light clutch.

We've said it before on Bike Social, but manual gearbox 125s are the most efficient fossil-fuelled vehicles on the planet, with 90-100mpg easily achievable. So it is with the Sinnis, which despite its sports image and some fast main road runs as well as trundling through town, averaged 117mpg, which is pretty good in anyone's language. The tank holds a decent 12 litres, so in theory (that's in theory) a full tank could take you a smidgen over 300 miles. Either way, plenty of capacity for weekend rides and weekday commuting.

All of the GPX's sports attitude would mean nothing if it didn't handle, and fortunately it does. The weight of 158kg isn't best in class – the R125 Yamaha is 14 kilos less, and that's with oil and fuel on board – but we're still in scooter territory here. That's backed up by good ground clearance and a generous 140-section rear tyre.

On the road, it all adds up to confidence building cornering. The steering is pin sharp, with not a hint of waffle, just easy and light changes of direction at will. The USD forks are smooth and well damped, as is the rear shock. At this price, you don't get multi-adjustability, just pre-load adjustment on the back, in the unlikely event that want carry a pillion, but they both do the job really well. It's the same story with the tyres. You wouldn't expect European tyres at the price, but the Chinese-made CSTs felt fine to me. And in a straight line the GPX feels as if it won't let you down, as steady at 65mph as at half that speed.

This is a 125, so it has to be good in town as well, and the light-ish weight and slim build do just that, making the GPX easy to filter past queues, but just watch for the wide mirrors. The engine too is quite happy at low revs, trickling along at 20-30mph. 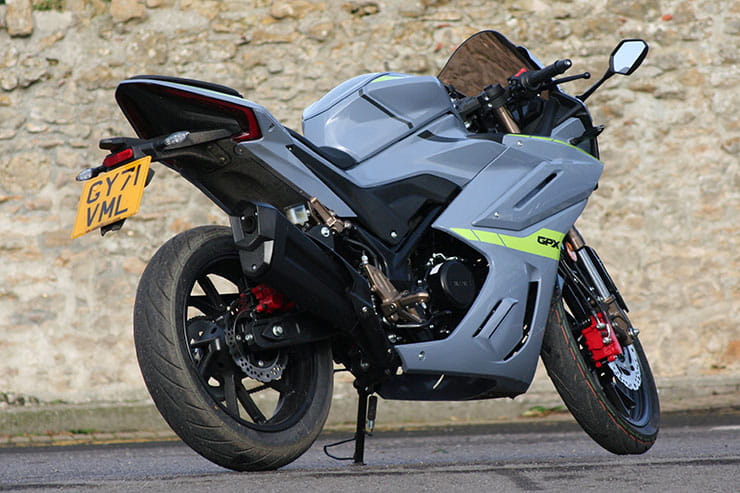 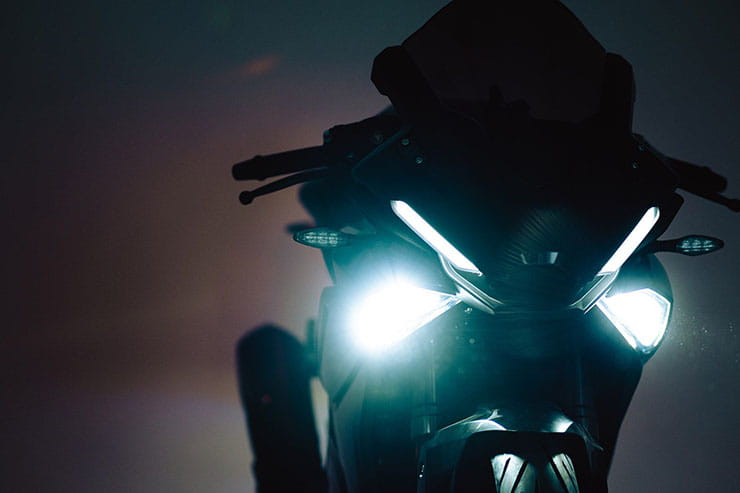 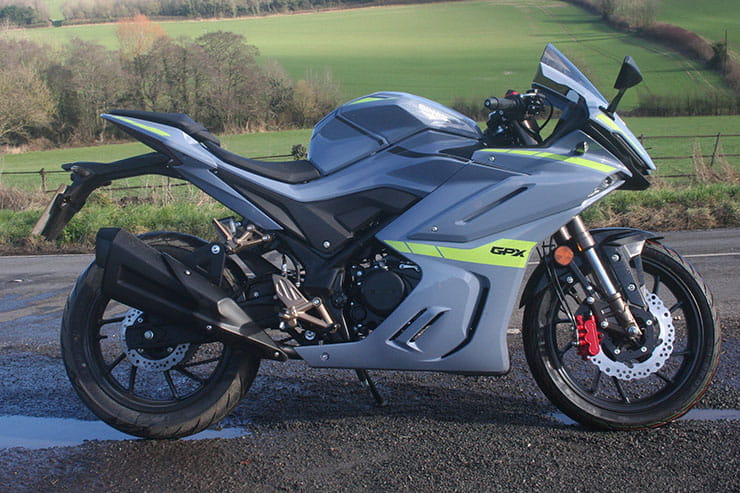 A few of the top-line 125 sports bikes have ABS. The GPX doesn't, but its linked system, which in the usual A1 way operates both front and rear discs via the pedal, is a good one. It's powerful and well balanced, and in fact there's no need to touch the front lever at all, apart from stopping or as a comfort blanket if you can't shake the habit of separate front and rear brakes.

As befits its sports bike status, the Sinnis has a full-on sports bike position with low bars, high footrests and a nose-down stance. If you're old and stiff, or not used to sports bikes, it'll probably seem like a step too far, so try before you buy, but really it goes with the territory of a bike like this. The position does start to make more sense at speed, as wind whipping over the little screen begins to act as a support, but if a lot of your riding is urban commuting, you might be better off with a more naked, upright 125. The seat's quite high at 816mm off the ground, but the perch itself is surprisingly comfy.

In this class, there are no rider modes, no ABS or Bluetooth alarm, but the GPX does have a few useful extras. The big TFT screen, which delivers an overture of flashes and limbering up when you first turn the key, has plenty of information without being crammed. There's a nice big speedo, bar graph rev counter and fuel gauge, engine temp, gear indicator and clock, all of it easy to read.

But that's about it, apart from the mirrors, which blur most of the time and are awkward to adjust, though they're big enough. Security is limited to a steering lock and pillions get a raw deal, with small pad, high footrests and nothing to hang onto apart from the rider, though that's endemic to all sports 125s. Finally, there is a two-year warranty, but the second year covers parts only 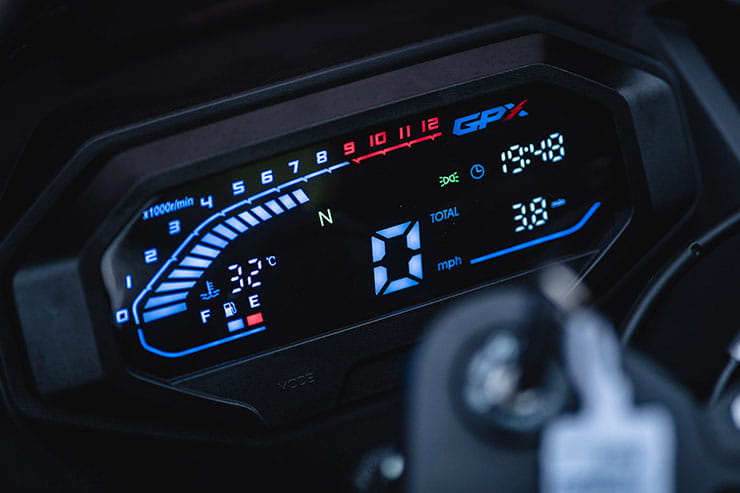 Have to say it, the Sinnis GPX walks that 125cc tightrope pretty well. It straddles a good balance of A1 compatibility, average 125 performance and affordability, plus it handles really well and looks fantastic. Just don't expect two-up touring, and if you're stiff in the legs, arms, back or anything else, steer clear. 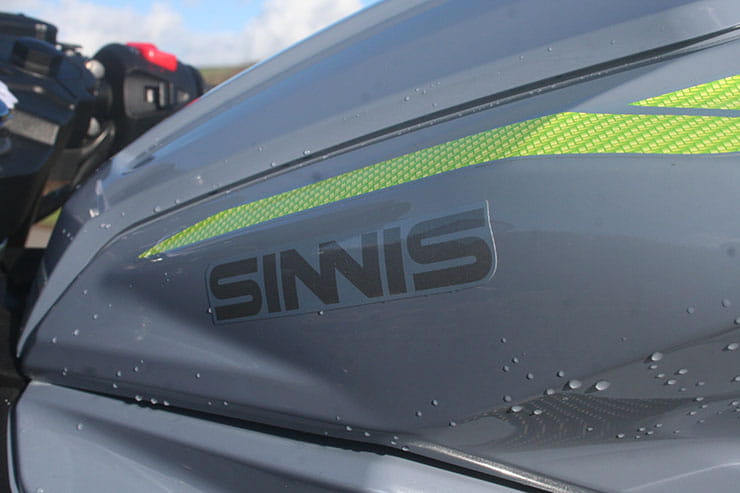