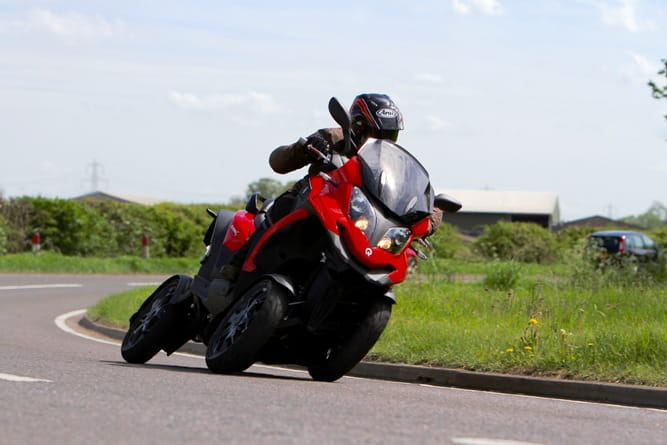 We’ve all seen those new fangled three wheeled scooters, they’re a growing market and in some European cities they outnumber two wheeled machines quite easily. Now Swiss company, Quadro have gone one better…

Yes readers this is the world’s first production four wheeled tilting scooter. It’s called the Quadro4 and is powered by a 346cc, 30bhp single cylinder engine. It has disc brakes at each corner, twin belt drive to the rear wheels and it can be ridden on either a bike or car licence (providing you passed your car test before January 19th 2013). Despite having four wheels this is still classed as a tricycle due to the narrow track of its axles.

I’ve ridden plenty of MP3’s and the like, I’ve even ridden the British built four wheeled 4MC prototype on a private test track but riding the Quadro4 for the first time was still an eye opener. Even though all the controls are just like you’d find on an ordinary modern scooter this machine still takes some familiarisation so don’t expect to just jump on it and ride like a demon. For starters the tilting system is different to the other manufacturers, it’s a Dual Hydraulic Tilting System. This means the scooter can balance in the upright position (MP3’s etc. need to be locked manually). Trusting what still feels like a two wheeled machine to stay upright at a standstill with your feet off the floor takes a bit of trust, so practice that before going any further. There’s also a tilt lock handle so the scooter can be locked upright whilst parked and there’s a handbrake that can only be taken off whilst the key is in the ignition. The scooter can’t be ridden with the tilt locked, or the handbrake on. 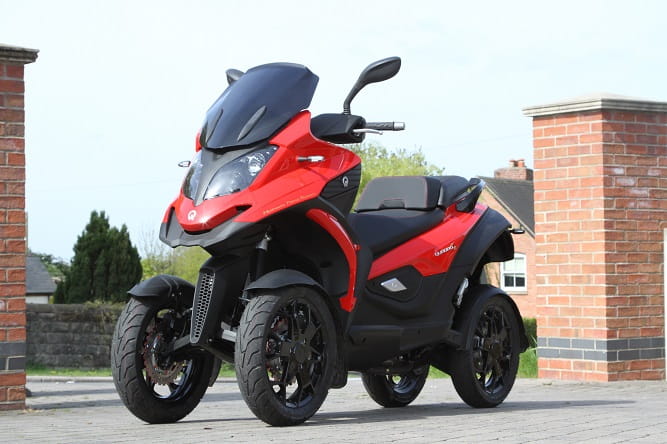 Once you’ve mastered sitting upright (try it on a camber, or whilst the body is tilted and it’ll still tip over) and have sussed out the controls you can take it for a spin. Four wheels are there for stability, you’ve got 50% more grip and traction than a bike, or scooter usually has. You’ve also got some serious braking power from the four 240mm discs and also quite a lot of weight to shift around, 257kg’s to be precise. To me this is where the car licence route is a little bit scary and as much as I like to get non riders in to our way of life I think they should have to do a CBT before riding something like the Quadro4. Of course there’s nothing stopping car drivers from doing just that for their own peace of mind. After all I doubt you’d have just jumped into a car and headed into the centre of a busy city without some formal training.

Even coming from a scooter background the Quadro4 still takes a bit of getting used to. In a straight line the Quadro feels well planted and although not particularly fast on acceleration it’s still quite quick and will do over 80mph. Cornering isn’t as straightforward and intuitive as it is on an ‘ordinary’ tilting three wheeler though. Leaning into a bend as you usually would isn’t quite enough to get you around, especially if you’re trying to ride it quickly. Steering round the corner and leaning certainly isn’t any better so what you need to do is to lean and use positive counter steering. Once you’ve realised that and start pushing the handlebar away from the turn the Quadro4 suddenly makes much more sense and you can ride as hard and fast as you like. There’s 45º of ground clearance to play with and I never found its limits during my time with it. The brakes are linked, use the rear lever and it operates all four nicely colour coded wavy discs. They’re stonking brakes, the front two discs can be used on their own if you like and they are powerful enough as well. The suspension is fantastic, you can hit a mid corner pothole with two wheels at full tilt and not really worry about it, equally a wet corner isn’t anything to worry about, in fact this is the kind of machine that will have you praying for a wet ride to work because you can ride it as quickly in less than ideal conditions as you can in the dry. That’s the beauty of a scooter like this; it’s a year round, all weather tool. If you’ve taken the plunge and got rid of the second car (let’s face it this costs the same as a decent car) so you can beat the traffic, park for free and arrive on time stress free every day then you need to be able to use your investment as much as possible. With the Quadro4 you really can, the company even list winter tyres as an accessory, fit those and you’ll be having fun in the snow as well. 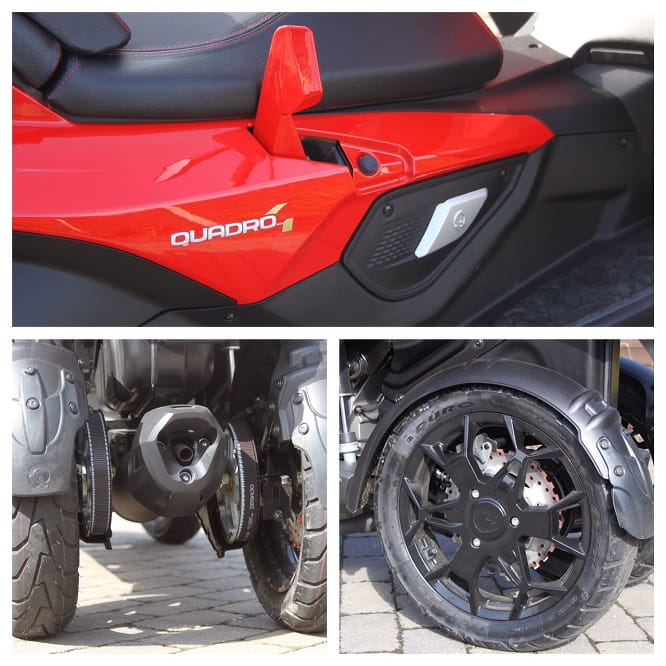 Once I’d mastered the way the scooter works, (to be fair it only takes an hour) I really enjoyed the week I had with this new fangled machine. It can filter just as well as any other scooter, it actually makes it easier in some respects because it’s so stable at slower speeds and the resistance from the hydraulics means it’ll stay upright at a crawling pace through traffic. I love riding it fast though, do not think for one second that having two extra wheels is some kind of cop out for less experienced riders. If you like riding quickly, you’ll love counter steering this to get the best from it. The more you ride it the more you appreciate the way it works and realise it’s great fun.

This may look like an overgrown Tonka toy with it’s ‘in your face’ aggressive styling but this is a multi functional vehicle, ride it to work in comfort, then take it for a good thrashing at the weekend if the mood takes you. I was sorry to hand the keys back after a week in the saddle. 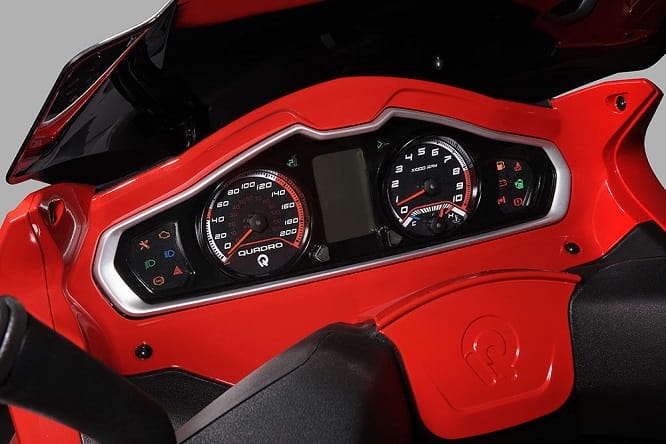 Would you consider moving to four-wheels?