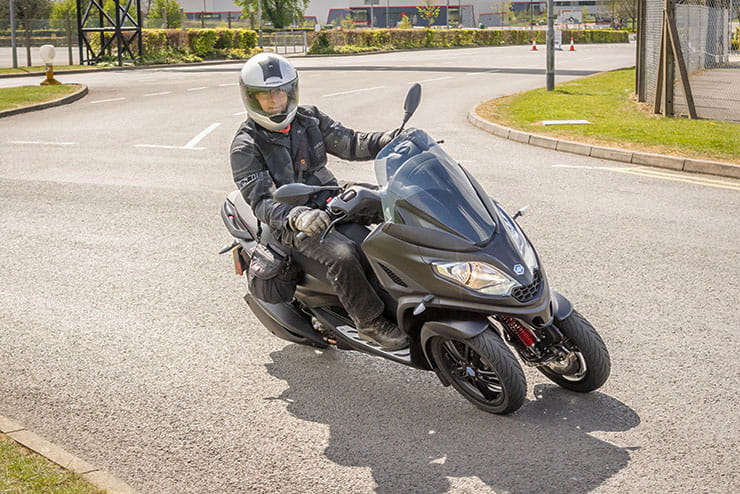 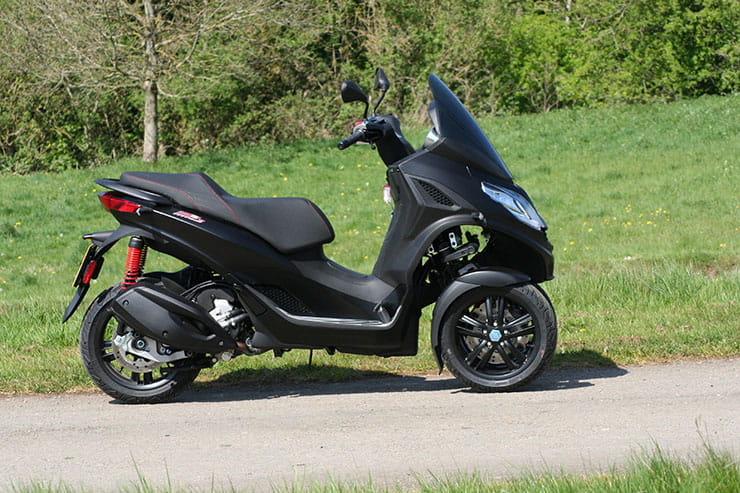 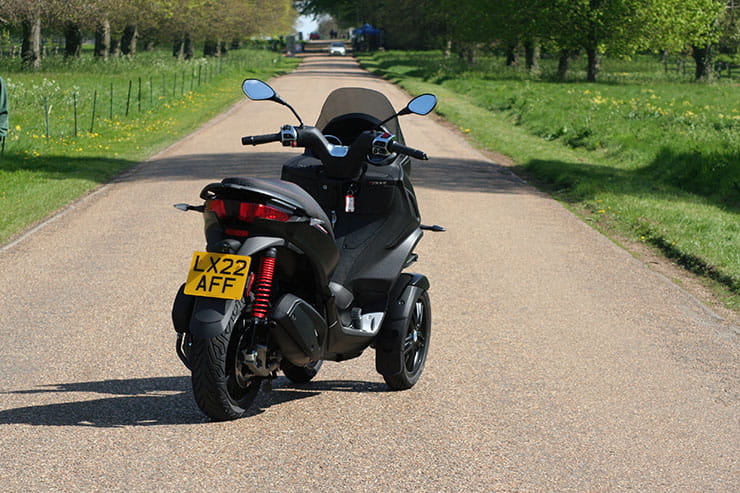 There's nothing quite like the Piaggio MP3. Piaggio's famous three-wheeler brought the concept of a tilting trike into the mainstream back in 2006 and since then it's become an icon. Similar rivals have come (and some gone) but the MP3 remains the daddy of tilting trikes.

The concept hasn't changed a jot – the idea is that a twin-wheel front end will give secure road holding and stability which a conventional scooter can only dream of. It works (it's even been tried on bikes with the Yamaha Niken) and the result is an enduring success, with countless thousands of MP3s serving as commuter tools all over Europe. It's been made in 125, 250, 300, 400 and 500cc versions, some of which (including the one tested here) can be ridden on a car licence and in shorter wheelbase form still avoids the London Congestion Charge.

But 16 years on, does it still cut the mustard? To find out I had a quick spin the latest MP3 300, which comes in standard and Sport versions – I rode the standard, but all the Sport really adds is red highlights on the rear shocks and seat piping. Mechanically, they're identical, both with the latest version of Piaggio's 278cc liquid-cooled single – with prices starting at £7000 (though see below) do they still make sense?

The MP3 300 HPE comes in at £7000, and the Sport £250 more, though in May 2022 Piaggio was discounting this three-wheeler to £6600 and £6850 respectively. That's a lot of dosh by scooter standards but compare the MP3 to the only other tilting trikes on the market and it looks more reasonable. Peugeot's Metropolis starts at £8999, though with a more powerful 400cc motor it's really aimed at the bigger MP3s. Yamaha's Tricity 300 is more comparable, but prices for that kick off at £8100, so the MP3 starts off with a decent price advantage.

Of course, you're still paying a thick premium over the price of a conventional two-wheel scooter. A Honda SH350i is £1700 cheaper and Piaggio's own Beverley 300 saves £2000. In other words, if you're determined to buy a tilting three-wheel scooter, be prepared to pay the extra. 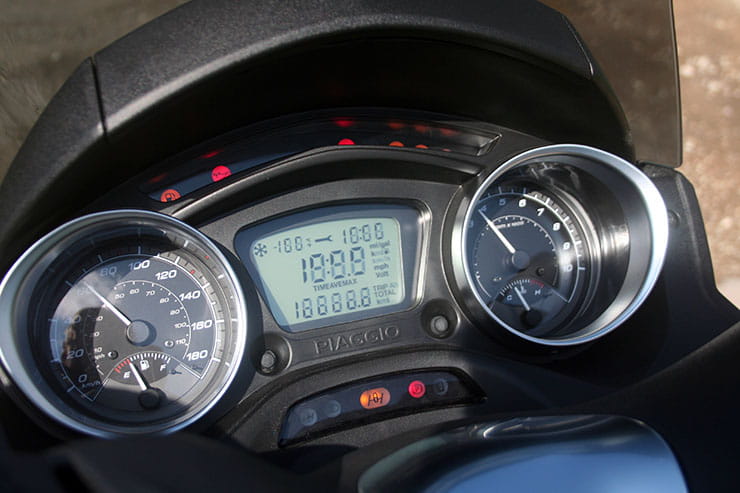 All scooters are slim and lightweight, right? Not when they include all the technical gubbins of a tilting trike, and the MP3 is a hefty device which weighs 225kg. So it weighs about the same as an Africa Twin but the modest 278cc single produces just 26.2bhp, which doesn't sound too promising.

In the real world of urban and outskirts riding, this doesn't matter too much. The MP3 has always offered the usual scooter twist 'n go transmission, so the relatively weedy motor doesn't get bogged down in a high gear. Give it a handful of throttle and the rev counter winds straight up to 7-7500rpm, and stays there, giving decent acceleration away from the lights as well as out on the open road, with enough urge from 50mph for overtaking.

The key point is that the MP3 is easily quick enough for the main road commuting it'll probably be doing. It easily holds 70mph, so motorways aren't a problem either. A big 500cc scooter like a T-Max (or Piaggio's own 500 MP3) will be quicker, but do you really need that performance? If not, the 300 does the job.

The MP3's engine is pure scooter, an unobtrusive liquid-cooled 278cc single which hides somewhere underneath that voluminous bodywork. With four valves with a single overhead cam, it produces 26.2bhp at 7750rpm, with 26.1Nm at 6250rpm – that's about the same power as the Tricity 300 but around 10% less torque.

A massive silencer keeps it quiet and there's no noticeable vibration, which is exactly what you want from a scooter – the engine's not there to take a starring role, but quietly get on with the job, which it does. It drives through the usual CVT transmission, which works seemlessly, simple twist 'n go. 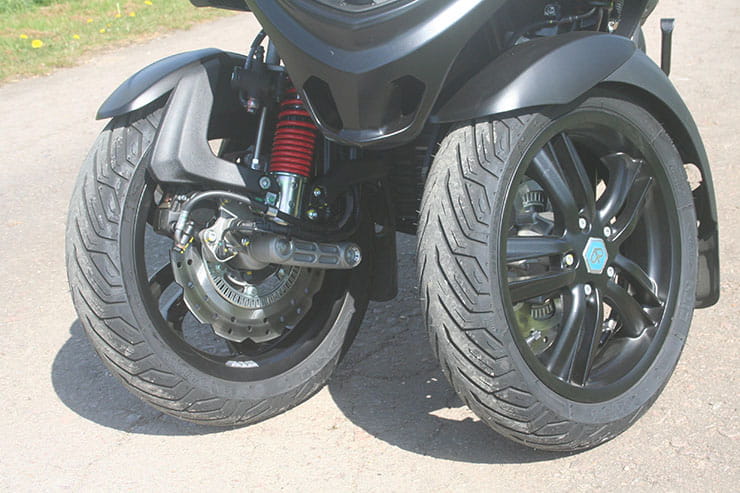 Let's get the key message out the way first. The MP3's twin-wheel front end gives far more cornering security than any conventional scooter. Having two contact patches (Michelin Citys in this case) rather than one means far better road holding and the articulated front suspension linkage copes really well with mid-corner bumps – hit a pothole or manhole cover mid-manoeuvre, and the MP3 just shrugs it off, where a two-wheel scooter on telescopic forks would jump and shimmy. The MP3 feels heavy....but solid, secure and totally unflappable, just the thing for wet and greasy city streets ridden all year round.

The other upside of the tilting trike layout is that the front end can lock upright, so you can sit at red lights, with your feet off the ground and there's no need to balance its 225 kilos, which is just as well as short legs straddling the wide seat will be on tiptoes. Better still, it automatically unlocks when you take off, which looks very cool once you've got the hang of it. It can be fooled in one way though. The engine won't respond unless the rider is sitting on the seat, but the seat sensor won't detect a shorter-legged rider on tiptoes – the answer is to trust the upright lock and get those feet off the tarmac.

There's just one downside. Being heavier and wider (at least, it seems wider) than an ordinary scooter, the MP3 doesn't slip through traffic quite as easily.

The MP3 has three brake controls – two bar levers plus a car style foot pedal which operates the three discs as an integral system. The pedal lacks feel and there's not much room for big boots to operate it, but the brakes are powerful enough and the standard ABS works well. Traditionalists can always stick to the bar levers. 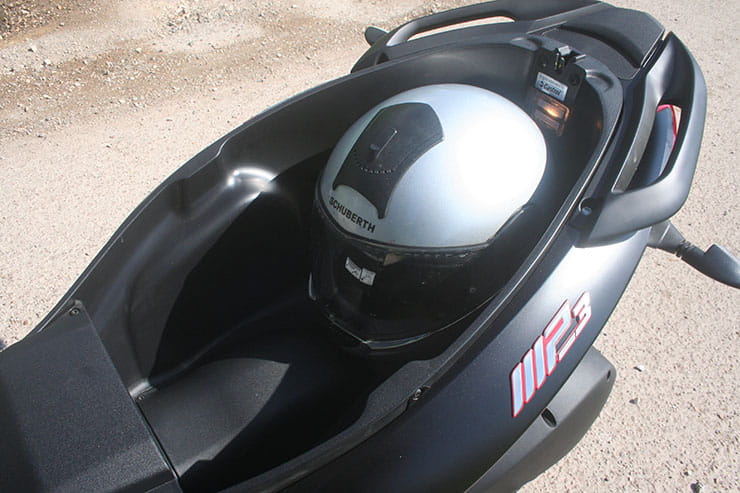 The MP3 is a big scooter with plenty of room for two, an upright riding position and comfy seat. It does get a bit blowy over 60mph, thanks to the short screen, but there's a high screen option along with a whole raft of accessories to aid year-round commuting, including heated seat, heated grips and a leg cover which is (wait for it) compatible with a heating system, for really toasty legs. Not only that, but the MP3 is big enough to be comfy two-up, and pillions get a good portion of seat, strong grabrail and fold-out pegs. 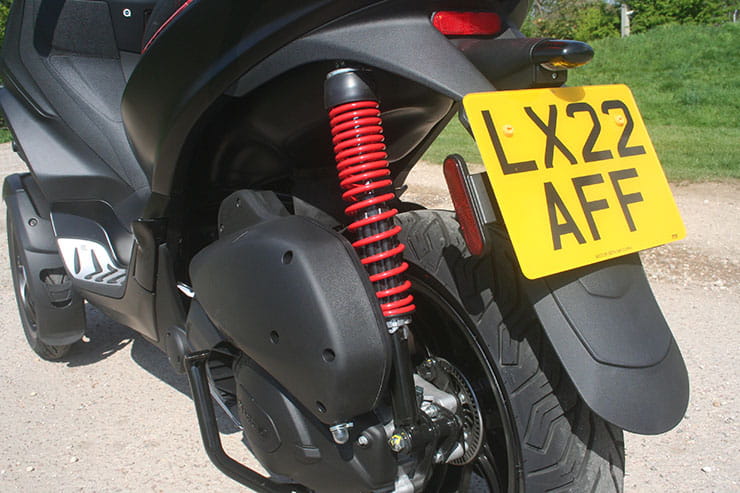 The MP3's main rider aid is that tilting trike front end, and we've already covered that, plus the ABS and extras. Parking is also made easier, thanks to the scooter's ability to lock itself upright even on a steep camber, with a handbrake to stop it rolling away (can't leave it in gear of course). Otherwise, there's a really comprehensive dash, with a big analogue speedo and rev counter plus digital fuel gauge, clock, voltmeter, mpg readout and a veritable panoply of warning lights. It's also got Piaggio's MIA Bluetooth system, which connects to your phone for music on the move and a whole range of connectivity with the bike.

The MP3 doesn't have the huge underseat space of some scooters, but there's enough room for a full-face and open-face lid there, plus the topbox option.

The MP3 has stood the test of time well. A pioneer of tilting trikes, it still sets a good standard and is cheaper than three-wheel rivals (though a lot more an equivalent two-wheel scooter). Handling is ultra-secure and the 278cc motor gives a good balance of performance and economy. If you're looking at an all-year-round all-weather commute, the MP3 is a good choice. 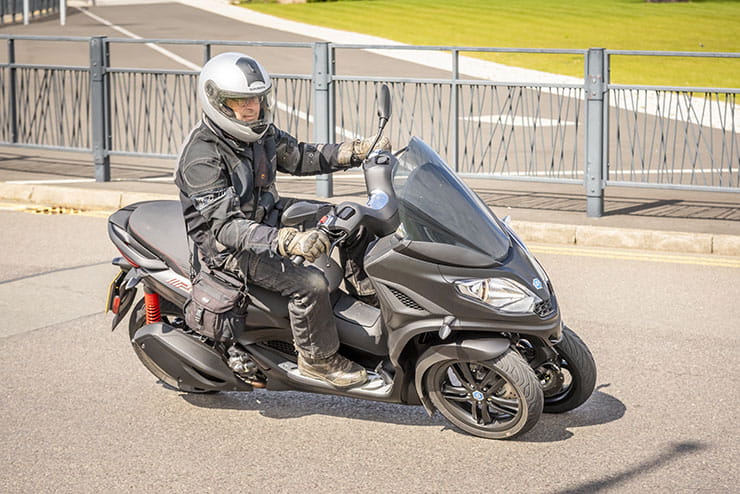 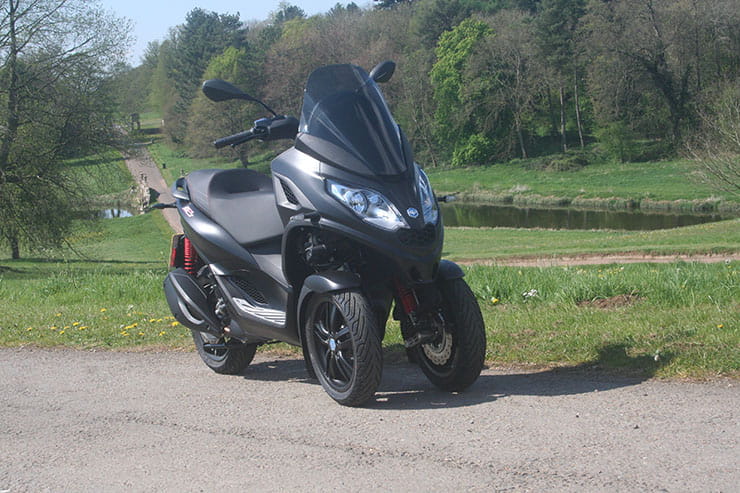