High-wheeled scooters seem to receive far less positive comments in the UK than the rest of Europe, which to anyone who has ridden one is a little unfair. Once upon a time, if you chose to have a pizza delivered to your home, a 50cc version of such a scooter was how it arrived. Maybe this was the reason for such negativity, although by nature of their business surely it meant they should have been applauded?

However, styles and tastes (of scooters) differ throughout the continent, and while ex-pat French and Italian riders get the higher wheels, the Brits tend to dismiss them for something they consider to be more practical or more stylish.

While style is something of personal taste, the practicality of a scooter with higher wheels than others cannot be argued when it comes to spanning the potholes adorning the ever deteriorating inner city roads commuters generally have to suffer.

Consider the cobbled streets of Rome for example – or other Italian cities – and it all begins to make sense as to why the high-wheeled Honda SH 150, 125 and 300 scooters occupy the top three sales spots for 2015 in the Italian market for motorcycles and scooters over 50cc. Piaggio’s high-wheeled Beverly 300 comes in fourth, their high-wheeled Liberty seventh and Beverly 350 in ninth.

Of course Piaggio told us that the new Medley has not been launched as a direct assault against the Honda SH but to fit in nicely between the more budget-priced Liberty model in their range, and the top-end Beverly scooters. Mind you, if the Medley takes any sales from the mighty Honda, they surely won’t be complaining. 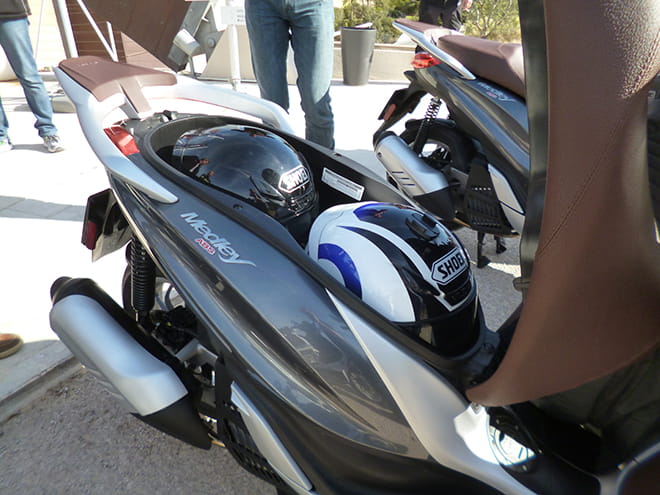 To assist with this, the other area of practicality that Piaggio have successfully addressed is that of storage capacity under the seat. Traditionally the high-wheeled feature of such scooters limits this space dramatically and so if a crash helmet could be stowed there, it often isn’t one of much consequence. However, thanks to some clever design and repositioning the fuel tank into the lower frame (which happily also improves the scooter’s low centre of gravity) the Piaggio Medley boasts underseat capacity for two full-face crash helmets, Yes it’s true, I’ve tried it myself!

Now it might seem a little strange to talk about such a feature before mentioning the test ride, but for this class of scooter it is important. These machines must be as practical as possible in all ways, and if that means somewhere to stow your possessions so that upon arrival you can appear as smart and unflustered as possible, then the Medley is certainly ticking your boxes.

But what can it offer on the road? Piaggio’s engine development department have come up with a brand new family of motors, the iGET (Italian Green Experience Technology) which features their “patented Stop & Start system called RISS (Regulator Inverter Start & Stop System)”.

What's that I hear some ask? Stop-start technology is growing in popularity amongst car manufacturers as it prevents the vehicle’s engine idling when stationary, thus reducing fuel consumption and vehicle emissions.

Here, the engine will detect when the scooter is stationary, the throttle is not being twisted and together with certain other criteria, will switch off automatically. It will restart automatically when the rider twists the throttle, and in the case of the Piaggio Medley does so almost instantly and silently.

For this, Piaggio have developed a new, brushless starter motor mounted directly on the crankshaft. This is not only far lighter and quieter than a traditional starter motor, but will last longer too, as of course it will be used far more often than on previous scooters.

The stop-start feature can easily be turned on and off via a switch on the handlebars and while I’m not certain that there is much to be gained by a rider who filters through the traffic rather than sits stationary in it, there’s no doubting that every little helps.

For the Medley, the Piaggio iGET engine is a 4-valve, liquid cooled 125cc motor that has a published power output of 9 kW at 8,250 rpm. To save weight and expense, the cooling radiator is situated on the side of the engine itself, rather than up front of the scooter, a feature which apparently also allows the engine to reach optimum temperature more quickly too. Piaggio also state that “mileage on the WMTC cycle reaches 47.5 km/l for the Medley 125cc” which translates into approximately 135mpg.

By the way, Piaggio tell us that this is the first Euro 4 compliant engine in this sector (125/150cc high-wheeled scooters), legislation by which all new powered-two-wheelers will have to comply with by the end of 2016 if they wish to remain on sale.

The claimed economy figures will of course depend on how you ride it. During the recent model launch in Italy we were given the opportunity to not only ride it through a few small towns but also up some scenic hillsides, offering plenty of alternatives to put the engine through various paces. Initial acceleration in town is good, certainly adequate, although out on the open road on occasion you felt a little more oomph wouldn’t have gone amiss. 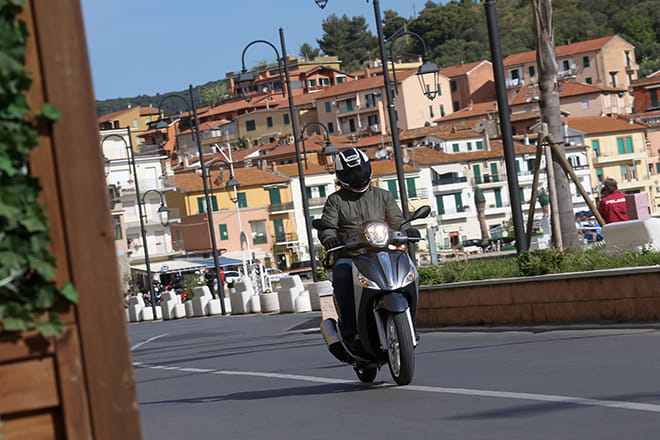 Once underway the Medley continues to pick up nicely, and even though the machine was only 600km old, it still achieved a maximum indicated 70mph on the speedometer on a long, open road, with only a little bit of crouching down at the end to persuade it. Sitting upright, it was happy at 55-60mph, and would pull on from a sensible 40mph for overtaking, or to climb the hills we were led along.

For stopping, the Medley is equipped with disc brakes at either end and ABS anti-locking system; in this instance courtesy of Bosch. Another new EU regulation is that all new scooters over 125cc must have ABS as of 2016, and while the new Medley we’re getting in the UK is actually only 124.5cc and therefore under 125cc, a 150cc version is also being produced for the mainland European market. Across Europe these machines meet a minimum requirement for use on Italian motorways, for example. As such, it’s really not much more to include the ABS with the 125cc version too, and will certainly be welcomed by many riders. Indeed, this one works very well indeed and no matter how hard I tried to force the scooter to skid in various circumstances, the ABS reacted correctly, yet subtly too. 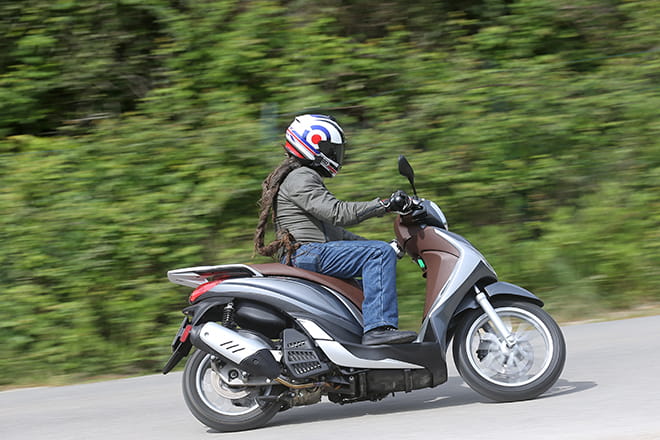 In fact, overall the Medley is a very surefooted, confidence-inspiring scooter. The 16” front wheel and 14” rear doing a sterling job of traversing poorly maintained roads, tight corners, and uneven cambers, while the brakes meant no matter what was beneath the Maxxis tyres, they kept you in control.

There’s nothing really ground-breaking here, but what it does it does well, and that’s all most Medley customers will ask of this scooter. If you want to set the world on fire, choose something else. If you want a reliable tool that gets you from A-to-B in comfort every day, then the Medley screams “pick me!” from the showroom floor.

So at the risk of repeating myself, if for any reason you’ve dismissed a high-wheeled scooter without actually riding one, then do give the Piaggio Medley a try; I reckon you’ll be pleasantly surprised. Piaggio seem to have put a lot of thought into their new Medley – named as such incidentally because of its middle-ground position between their 3-valve air-cooled Liberty and larger capacity liquid-cooled Beverly models. They really do think that Liberty customers will see the appeal of moving up a peg or two next time they walk into a Piaggio showroom.

Not only does the Medley have class-leading 36.2 litres of luggage capacity under the seat, but this is complemented by a leg shield glove box that includes a USB charging point located deep within (and it is set back quite a way, so will need some exploring). There is also a fold out luggage hook too, for hanging those extra bags of shopping on at the end of the week. You truly don’t need a car if you have the right scooter for the job; trust me!

There’s none of that seat-lifting inconvenience for refuelling the Medley either, the petrol filler being located externally in the scooter’s central tunnel. This also means no accidental over filling and subsequently spilling petrol onto your stored possessions. Yes, this is an observation made from personal experience.

The ride is comfortable, the saddle sumptuous and the twin rear shock absorbers which are adjustable for pre-load doing an admirable job of soaking up all the bumps along the way. The seat is a little high and wide for some – myself included – but the shape allows the rider to easily slide forward when at a standstill to get your foot down without feeling unbalanced or seeming ungainly. I have a 31” inside leg and always felt in control of the Medley. To assist you when parking, both a side and a centre stand are fitted.

Up on the handlebars you’ll find a seat release button, the usual lights and indicator switches, while the easy to read dash itself offers a couple of trip meters, time and temperature readings too, as well as the reassuring flashing red LED on the engine immobiliser that is armed for added security once the ignition key is removed.

Service intervals on the Medley are 10,000km apart with Piaggio telling us that the drive belt will only need replacing every 20,000km, which is good news for the customer, if not so for the dealer. Instead maybe they will tempt you with some of the accessories, like a windscreen, top box to mount on the rear carrier, or the Piaggio Multi Platform media which allows the scooter to be connected to your smartphone and therefore opens up a whole world of technology available at your finger tips as you then have an on-board computer. How trick is that?

The Piaggio Medley 125 is already available in UK showrooms, priced at £2,671 on the road and available in Pearl White, Midnight Blue or Titanio Grey.

The Medley S 125 features some satin grey and black trim instead of plain silver in places and arrives in July priced at £2,771 on the road. This will be available in Sport Blue.

With the new Euro 4 compliant iGET engine, ABS brakes and impressive storage capacity, the Piaggio Medley may have been developed to fill a gap in the company’s own range, but it certainly has the potential to elbow rivals out of the way when vying for customers. The pricing is extremely competitive too; the market-leading Honda PCX surely quaking in its tyres at the prospect of this learner-legal Italian competing directly on the streets of Great Britain. Only time will tell of course, but the right marketing campaign could see Piaggio’s Medley steel the 125cc scooter crown.

Looking for insurance for your scooter? Find out more about scooter insurance with Bennetts.