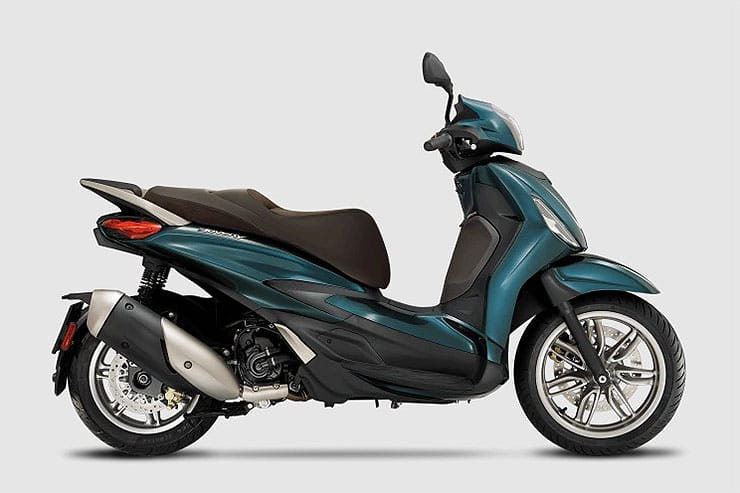 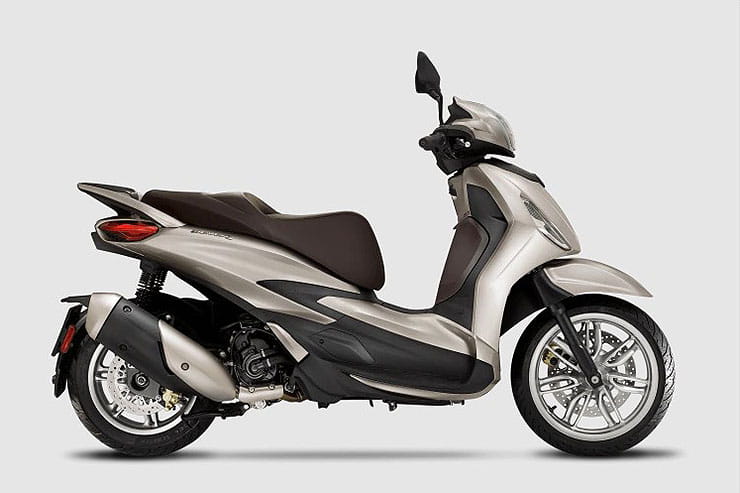 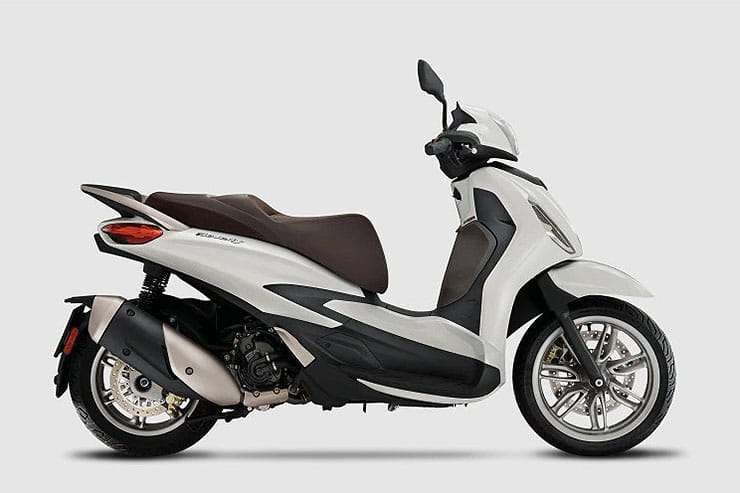 Britain has never gone large on big-wheel scooters. Visit any Italian, French or Spanish city and you'll see loads of the things, but here in the UK we seem to prefer scooters with tiddly wheels. Which is a shame, because the big-wheelers tend to have better road manners and more stable handling.

Piaggio's Beverly is near the top of the big-wheel world. First launched back in 2001, it had a complete makeover in early 2021 and the Italian giant now likes to call it a 'crossover' scoot, with more motorcycle influence than before. In its latest form there's more power, with 300 and 400cc options, plus ABS, traction control and numerous other goodies. Piaggio reckons the latest Beverly 300 combines the best of all worlds, with traffic slicing ability, motorway performance and the comfort of a GT scooter. So, is that true, or does it fall between all three stools? 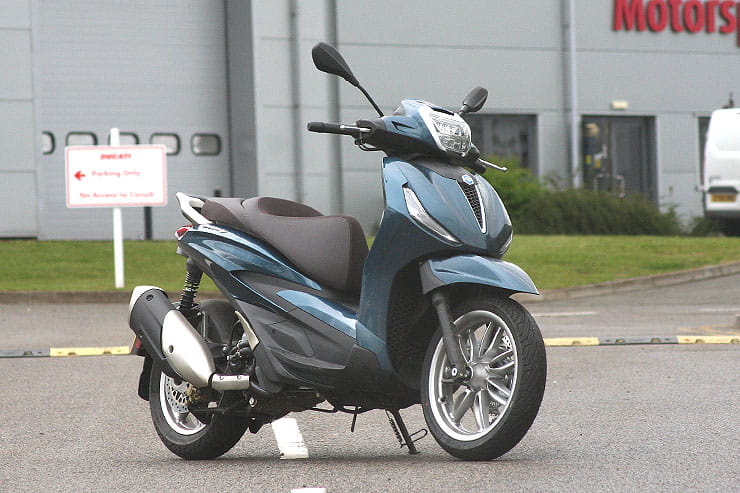 At £5400 the Beverly 300 tested here is almost unique – most big-engined scooters come in long wheelbase GT form – and the Beverly is competitive with all of those. There's just one rival big-engined, big-wheel scooter and that's the latest Honda SH350i, which comes in at £4999 and offers a little more power and torque than Beverly into the bargain.

These 300cc scooters have always offered plenty of grunt, and the Beverly is no exception, thanks in part to a substantial boost in power and torque (see below). The 278cc single (the same motor which powers all 300cc Piaggio/Vespas) doesn't sound that inspiring, but it's got a certainly beefy presence, simply down to the bigger capacity.

Better still, it gives a lot of oomph to this big-wheel scooter, which takes off well from a standing start and has really quick acceleration in the 30-60mph range, the sweet spot for overtaking on A and B roads. All of which makes it great fun to ride, and I had no problem keeping up with a group of motorcycle journalists on Piaggio's test day. The transmission is the usual twist and go automatic – no clever semi-automatic system here – and it works well with the engine, being nice, smooth and progressive. Out on the motorway, the Beverly will happily hold 70mph and whips up to an indicated 80mph or more on the speedo, so it's well up to outside lane shenanigans.

Big GT scooters can start to get a little cumbersome in town and that's the idea behind shorter wheelbase big-wheelers like the Beverly, to retain some of the wieldiness of the 125s. It certainly is easy to ride in town, small enough to filter easily, with a good blend of handiness and sheer oomph. 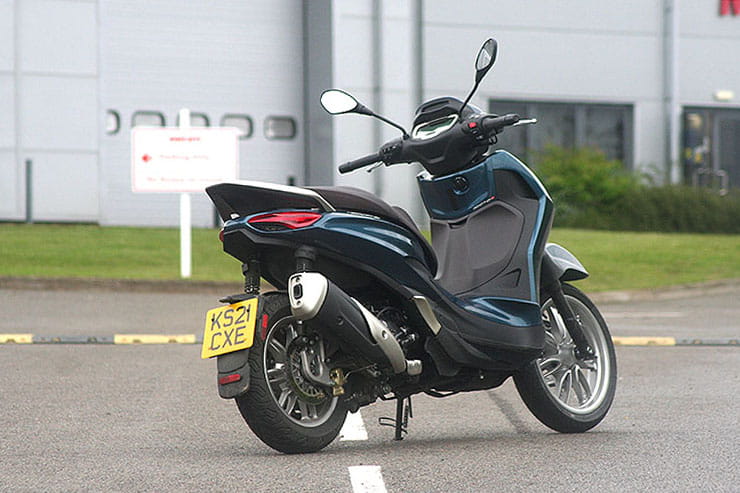 Whichever Piaggio/Vespa 300 you buy, it'll have the same 278cc water-cooled four-valve single at its heart, now updated to Euro 5 spec. In the revamped Beverly it gets a 23% power boost to 25.8bhp at 8000rpm while peak torque is up 16% to 26Nm at 6250rpm. Piaggio describes it as a new engine and there are certainly lots of internal changes to roller tappets, the cam profile, stronger valve springs and tuning of the intake duct. Either way, it's an up to the minute motor which does the job. If the 300 still isn't enough, there's a 399cc version with over 35bhp and a lot more torque peaking at lower revs. Judging by the 300's performance the bigger Beverly should go quite well – just to underline the fact, Piaggio fits a twin-pipe Akrapovič silencer to the 400.

Both Beverlys use the same standard twist and go transmission, though the 400 has a wet multi-plate clutch (still automatic of course) to cope with the extra torque.

These 300cc scooters can be surprisingly good on fuel, despite their extra weight and power, partly because the engines are working less hard than the average 125 on taller gearing. According to the Beverly's instantaneous mpg read out (average would make more sense) it was giving over 90mpg much of the time, and the official average is 85.6mpg. We'd expect at least 80mpg on typical urban and suburban commutes unless much of it was flat out on motorways. The 12-litre tank is a decent size for a scooter, enough for a 200-mile range if you can achieve the official figure.

I rode the Beverly on one of Piaggio's test days, and a great idea it is too, bringing the whole press fleet together in one place. This includes Aprilia and Moto Guzzi motorcycles, and the test route on a good mix of twisty A and B roads saw the scooters expected to keep up. And the Beverly did easily, thanks to its chassis. Compared to the 12-inch wheels of smaller scooters, the 16-inch front and 14-inch rear on this one really do inspire confidence, and there were no nasty moments as we romped along the back roads of Northamptonshire.

On paper there's nothing very exciting about the suspension set up, with non-adjustable forks up front and a single rear shock with five-position pre-load, but it copes very well with the Beverly's weight – reflecting the substantial chassis and bigger components than a traditional scooter, it tips the scales at a motorcycle-like 185kg, and the 400 adds another 10 kilos to that. Fortunately, none of this weight is very obvious on the move, and the 16-inch Michelin tyres play a good supporting role. 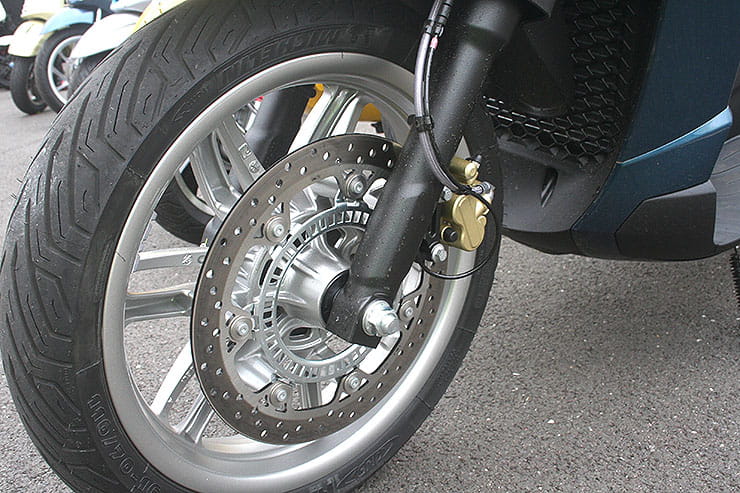 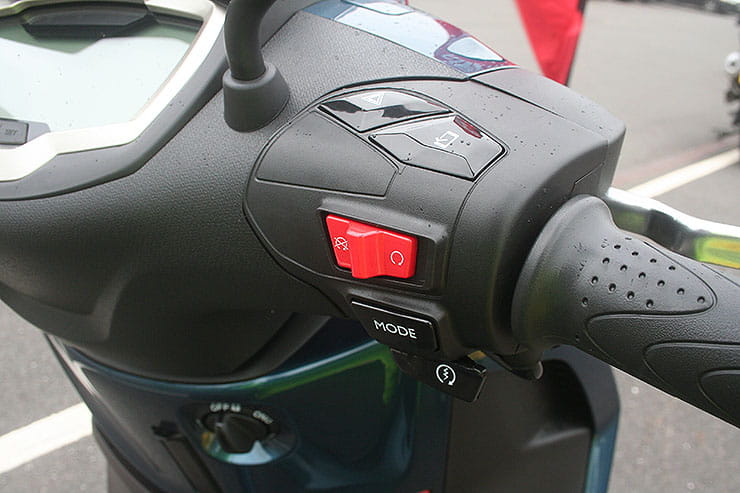 The bigger engine means the Beverly has to have ABS for the two discs (240mm rear and a motorcycle-size 300mm at the front) and the whole set up works very well. I thought they were a bit heavy, but there was no doubting the power. There's traction control as well, probably with greasy city streets in mind than gaining valuable hundredths of a second on track days – it's nice to to have, though you can turn it off if you insist.

Scooters need to be comfy, especially bigger ones like this which are liable to be used for longer commutes. The Beverly delivers with an upright, natural riding position and good support for the lower back. It's got a highish step over rather than a flat floor, and the 812mm seat had me (30-inch legs) on tip toes, but the front end keeps the weather off your legs. For year-round commuting (and certainly if you're intending to use the Beverly's motorway potential) you'll be needing a screen as well. Pillions get a decent-sized seat and grab rails, plus flip-out pegs. 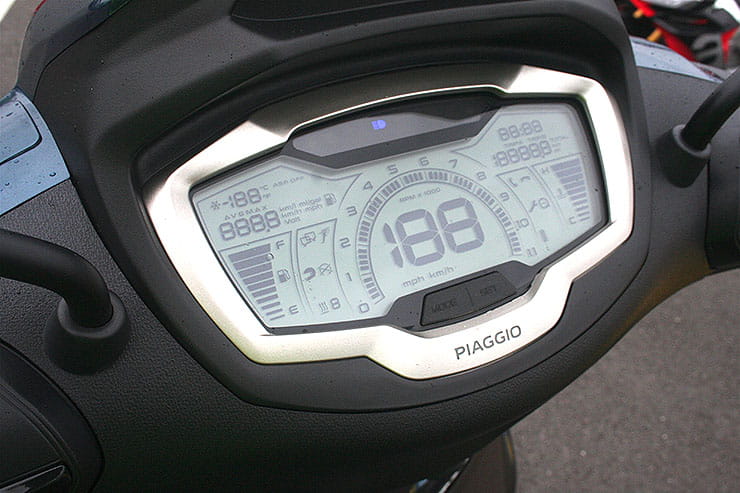 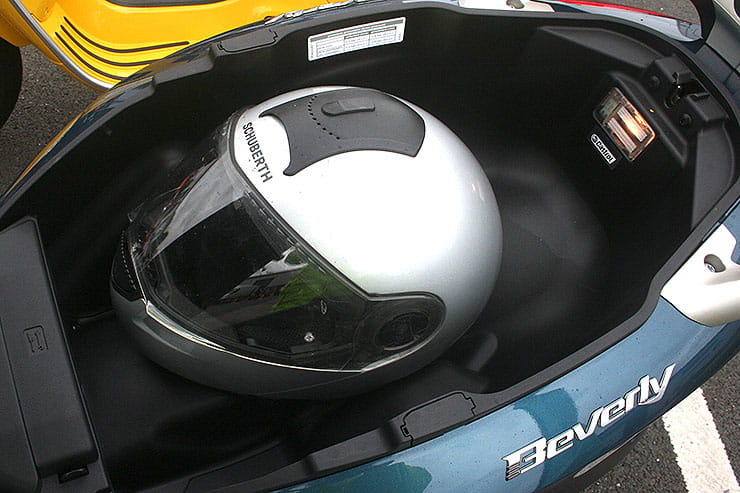 There's a pretty comprehensive dash, with all the usual information plus a digital rev counter, voltmeter, clock, instantaneous mpg, and miles left in the tank – nice to see a big digital speedo when so many scooters have analogues with tiny mph figures. As befits a £5000-plus scooter the Beverly is well equipped with its ABS, traction control, keyless ignition plus Bluetooth compatibility with your phone. There's useful space under the seat, but it's not big enough for a full-face lid (though Piaggio reckon you can squeeze in a pair of open-faces). You do get a small front cubby with USB charge point, and the traditional bag hook, but you'll have to pay extra for a topbox.

If it weren't for the Honda SH300, the Beverly would be unique in the UK, as the only big-engined big-wheel scooter on the market. As it is, the 300cc Piaggio doesn't have quite as much power and torque as the Honda, but it's still quick and does have a slightly more aggressive look than Big H's SH. Big wheels give stable handling and there's still enough scooter touches to make this a practical day to day ride. 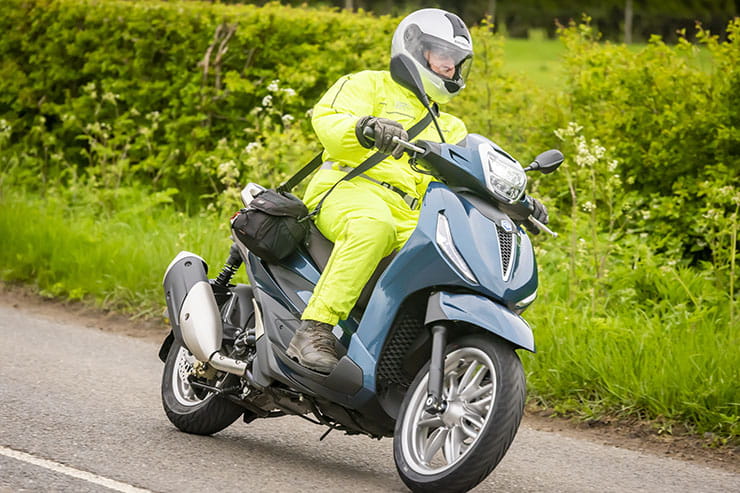