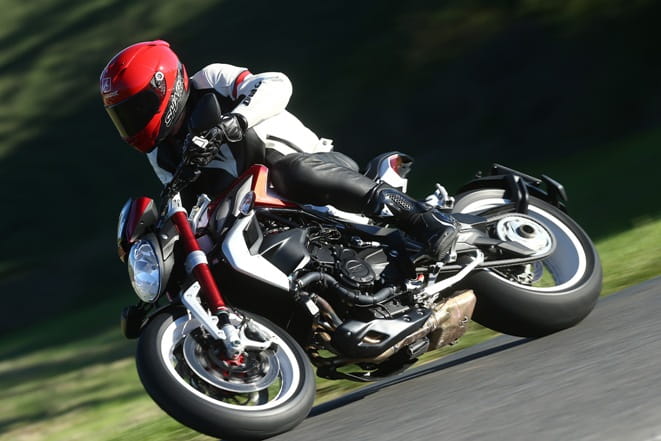 Even MV Agusta boss Giovanni Castiglioni was surprised by the success of the radically styled Dragster 800 that his firm launched at the start of this year. “We planned to make 500, we’ve already sold 1700 and could have sold 2000 if we’d been able to produce them,” he says of the radically styled naked triple whose relatively high price and lack of practicality were clearly no drawback.

That original Dragster’s popularity helps explain this latest follow-up model: an even more powerful, outrageously styled and high priced model called the Dragster RR. This incorporates many of the updates also introduced with the Brutale 800 RR, including a more powerful three-cylinder engine with standard fitment quick-shifter and auto throttle blipper. And it adds some extra appeal of its own, notably with a stunning pair of wire-spoked wheels unlike anything previously fitted to a streetbike. 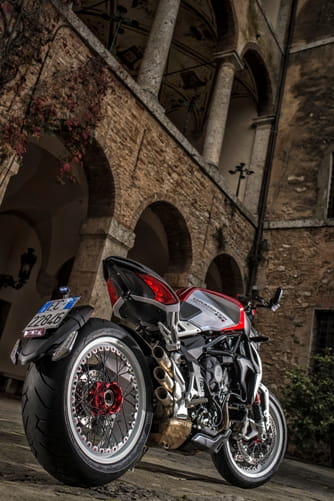 The RR incorporates a few other chassis mods, notably a suspension set-up of 43mm Marzocchi forks and Sachs shock that is slightly stiffer than those of both the standard Dragster and the Brutale RR. Like the other RR model it also features an uprated brake system that combines Brembo four-pot radial calipers with a Bosch ABS system, incorporating anti-stoppie function. This bike also shares the standard Dragster’s bar-mounted mirrors, which give a good view but make the bike very wide.

In performance terms the biggest change from the standard Dragster is the updated RR powerplant. The 798cc triple gets a revised airbox and intake trumpets, larger diameter throttle bodies and twin injectors per pot, plus a reworked exhaust that improves flow. Maximum power increases from the Dragster’s 125bhp to 140bhp at 13,100rpm.

That’s a healthy boost, and it makes the MV even more rapid and entertaining. The Dragster RR accelerates mighty hard, and because it’s very light and about half as long as a genuine drag racer, it likes nothing better than to get that unique 17-inch front wheel far from the ground, intentionally or otherwise. At least the seat’s shape helps keep your weight well forward as the RR shoots towards its 150mph-plus top speed, making a delicious three-pot howl through those tiny silencers.

This MV also helps with respectably crisp and well controlled fuelling via four riding modes, one of them customisable. Both Normal and Sport gave slightly erratic running at a steady 5000rpm in town but generally worked well. Most of the time I stuck to Sport because this adds the RR models’ other new feature, the quick-shift auto-blipper that allows clutchless changes both up and down through the box. It worked really well, giving reliable and very quick down-shifts with minimal effort. 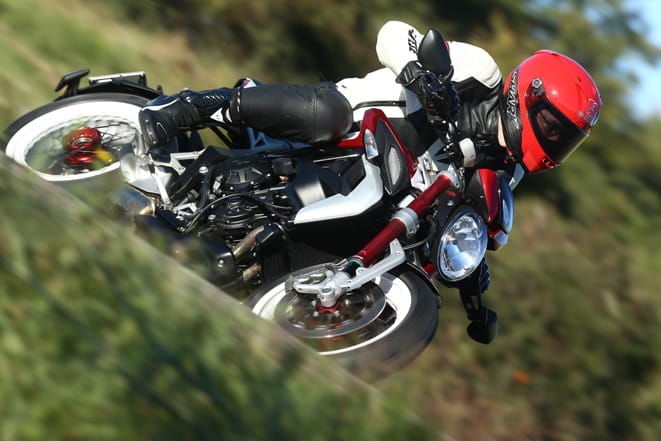 Handling was a bit more like hard work at times. The basics are all intact, with a stiff frame, taut suspension and racy geometry on a bike that weighs just 168kg dry. On smooth surfaces it was fine. But the lanes of rural Tuscany were bumpy enough to get it twitching, as the firm suspension passed on every imperfection, sometimes so harshly that it was difficult to prevent the light-action throttle from being affected.

I’m not sure that the super-wide 200-section rear Pirelli helped cornering stability, either, although the agile, hard-charging MV was still respectably quick and could doubtless have been improved by adjusting its suspension to suit the poor road surface. The RR stopped hard too, occasionally triggering the ABS, which was probably cutting in not due to the front wheel locking, but to prevent the rear lifting. 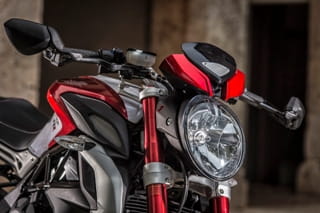 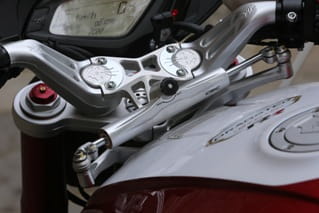 Being tall I sometimes found the seat preventing me from moving back as much as I’d have liked, but despite that the Dragster RR provided plenty of entertainment on straight and twisty roads alike. And there’s not much point in moaning about this bike’s seat, because MV know it’s not the most sensible solution, and that’s not what this bike is all about.

The firm’s own publicity sums it up rather well. “Pure thrills. Absolute exuberance… More horsepower. More electronics. An even more brazen look.” If that’s what you want from a naked middleweight, there’s nothing to match the Dragster RR.

Striking looks or avert your gaze?  or !