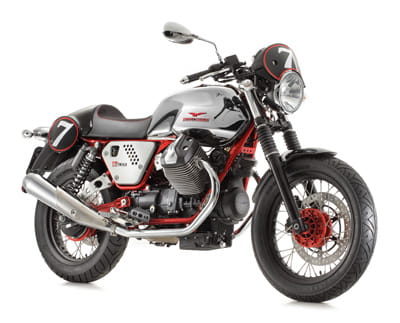 If there is one bike available today that is affordable (this discounts Norton) and still truly represents the glorious years of cafe racer culture then the Moto Guzzi V7 Racer is it. All those black/white cine films (the ones your parents go misty-eyed over) of riders wearing goggles and open-face lids standing outside milk bars can be re-enacted in full with a visit to the Ace cafe, seaside or indeed on any ride when the mood takes you. That’s how faithful the V7 racer’s styling is.

Although the V7 Racer has been around for a couple of years it has received a slight makeover for 2012 but is still, Guzzi claim, a limited edition model, Whether this turns out to be true is another thing altogether – the previous model was meant to be a limited run but Guzzi kept building them to fulfil demand. Going by this new model there will be a similar demand.

The Guzzi’s 90 degree opposed V-twin engine is an oddball because of the way it sits across the frame rather than the traditional length of the frame a la Ducati or Harley etc. Because of this, the throw of the pistons and crankshaft give rise to a side-to-side rocking motion of the whole bike when revving the engine at standstill. It’s different but characterful and doesn’t interfere with the riding dynamics.

For 2012, power output and the engine’s smoothness has been greatly improved, care of a new fuel injection manifold. Don’t expect the Guzzi to be a powerhouse though, despite its style – part of its retro charm is that it’s still a punchy little number at low rpm, but lacks outright horsepower that can catch a lot of riders out. Expect a ton-ten on the clock dial at a push, not that we’re encouraging it!

Everything else about the V7 Racer is thoroughly modern even though the cafe racer looks say otherwise. From the single front disc and 4-piston Brembo caliper to the adjustable rear sets and today’s tyre compounds.

Where the Guzzi really appeals is the ability to draw admiring looks everywhere you go together. It would be fair to say that this is one of the bikes that will figure highly in the ‘dream garage’ wish list. I know many friends, along with me, who would be delighted to sit and polish the V7 racer at every opportunity.