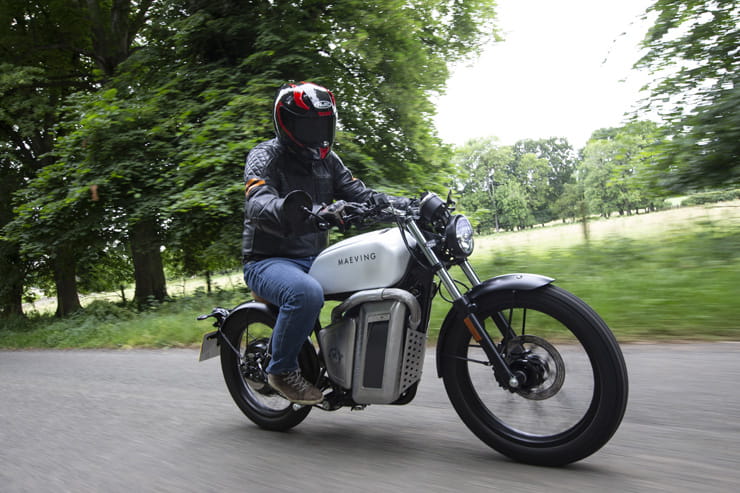 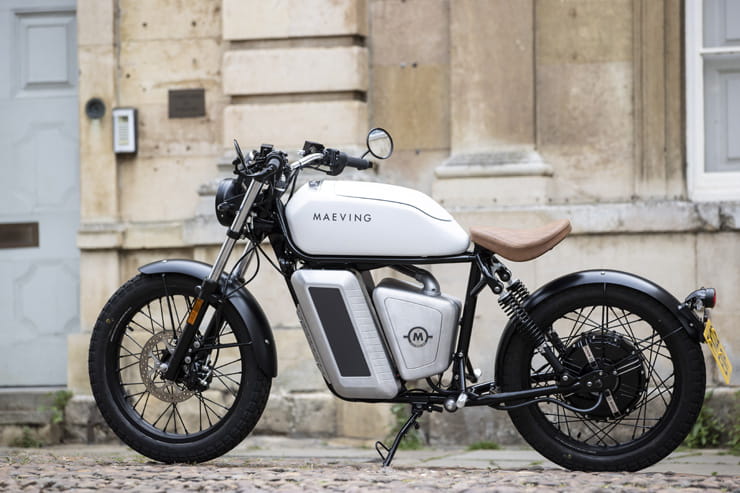 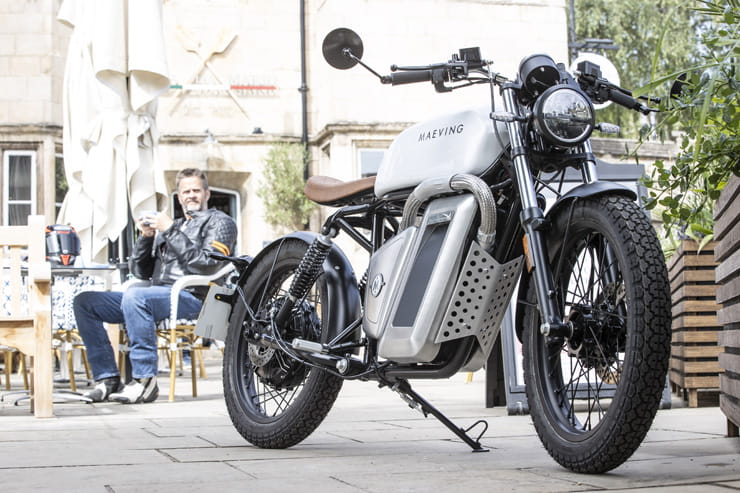 From the naked Harley-Davidson Livewire to the Energica Experia adventure tourer to the Super Soco step-thru, the styles of electric bikes are increasing apace as companies manoeuvre for a slice of the future.

But no-one has successfully married retro styling to battery power – until now. Enter the Maeving RM1, with its distinctive vintage-cum-hipster looks, powered entirely by electrons and facial topiary. Last bike I rode that drew as much attention as the Maeving was Triumph’s Rocket 3R, somewhat at the other end of the price and performance scale. But in terms of street popularity, there’s nothing between the two.

Speaking of Hinckley, Coventry-based Maeving are almost all ex-Triumph people, recruited by Seb Inglis-Jones and Will Stirrup who set-up the company in 2017. Coventry is the spiritual home of the British bike industry – not necessarily something you’d want to boast about – and Maeving now employs 16 people. The RM1 is the first fruit of their labours.

BikeSocial spent an agreeable morning café-hopping with the RM1 finding out if looking to the past to create the future is a good idea. And hey, have a campachoochoo on me yah Col. 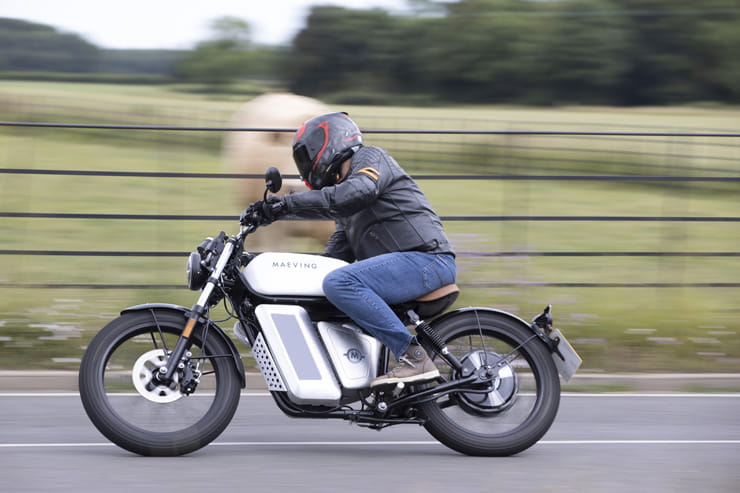 There are no PCP deals as yet but an HP deal is in the offing, said to be less than £100 per month. And there’s no road tax to pay on the Maeving, and no inner-city clean air zone charges. You’ll still need a minimum of third-party insurance and the Maeving will need servicing at three months, then every 12 months or 3000 miles – but at no point will that involve dropping the oil or doing valve clearances.

Maeving estimates RM1 annual running costs to be around £60 per year (but not sure that includes battery degradation – see later). 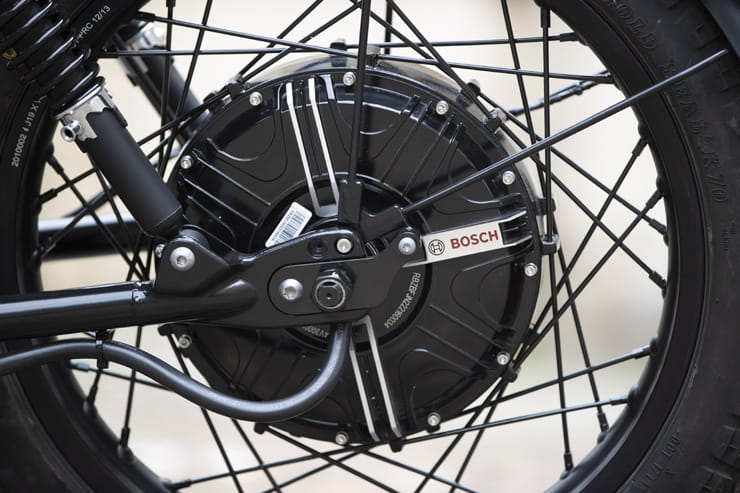 The Maeving has a Bosch-made drive motor housed in its wire-spoked 19in rear wheel hub, so there’s no chain, belt or ‘transmission’ – which minimises drivetrain power losses and reduces maintenance and running costs. Looking at the bike side-on, immediately behind the smart perforated aluminium ‘radiator’ guard and frame downtube lives a large aluminium battery compartment, linked by a large braided ‘hose’ carrying wiring to the control unit compartment.

The motor is rated at 3.0kW continuous (4bhp) and 4.4kW peak (5.9bhp) – compared to a petrol engine, the RM1’s performance feels somewhere between a moped and a 110cc scooter. It’s A1 legal and can be ridden on a restricted licence after a CBT test, which gives some idea of its performance level.
The Maeving boys and girls are explicit in designing and labelling the RM1 as an urban machine – short inner-city hops, short-range commutes, nipping out for a coffee at lunch time. With a 45mph top speed, it’s not designed to excel on open roads – not dual carriageways, not country lanes. Anything with traffic moving close to the national speed limit isn’t impossible, but they aren’t its remit. And, sure enough, a quick sidle down a country lane shows the Maeving can’t stay in the slipstream of a loaded tipper truck, and it’s not able to overtake slower vehicles because there’s nothing in reserve; in fact, much like a moped, you either hold traffic up or get overtaken by impatient, red-faced people in tin boxes. Which is fine – again, it’s not what Maeving say the RM1 is designed for. But not everyone lives and works in the city – can’t help feeling another 10mph would extend the bike’s versatility, and commercial viability (if not its range), considerably.

In town, where the Maeving *is* designed to operate, it’s happiest keeping pace with a 30mph flow of traffic, and will duck and dive through a line of cars with an eerily quiet fluidity (in fact it’s so quiet you have to watch out for pedestrians stepping off the pavement in front of you). Throttle response is light, and controlling the RM1 is intuitive. It’s twist-and-go simple. 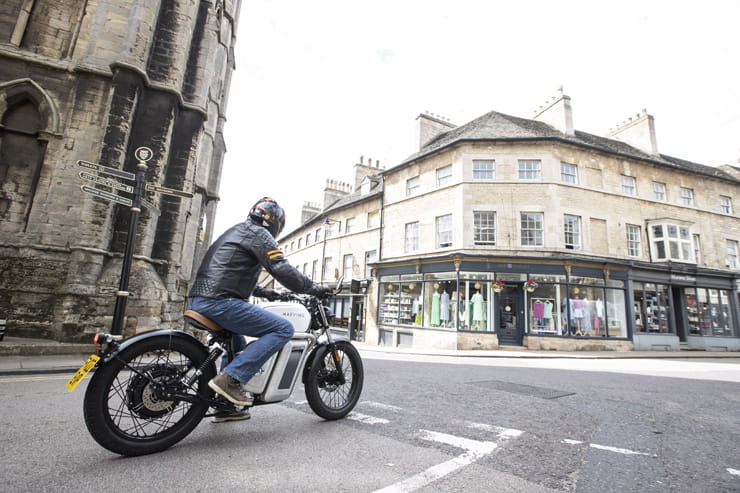 But for all it’s urban-centricity, the RM1 is surprisingly sluggish off the line or uphill, creeping forward for the first few yards and only getting going further up the, er, power curve. I ended up doing the old scooter trick of throttling up the motor and holding the bike back on the brakes before releasing it when the lights changed (probably not a recommended technique in case it burns something out). I can live without a 45mph top speed in town, but I expected just a bit more zasp to scoot away from traffic. The motor comes with three modes – Sport, Range and Balanced (Sport is ‘full on’, Range limits top speed to give you maximum mileage, and Balanced is a bit of both). 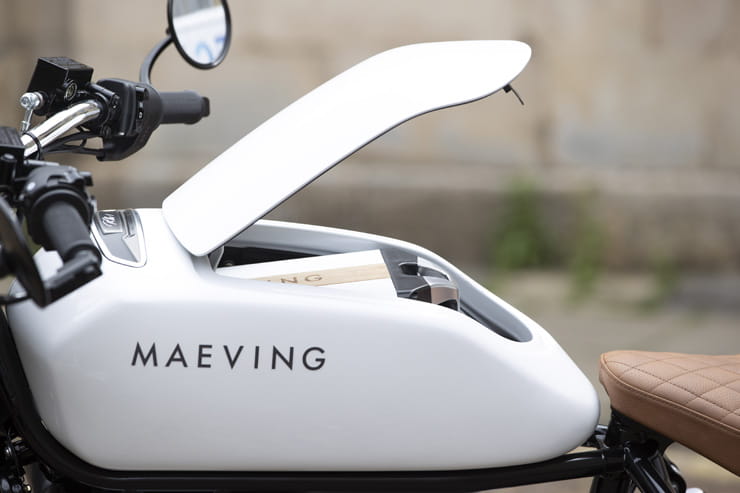 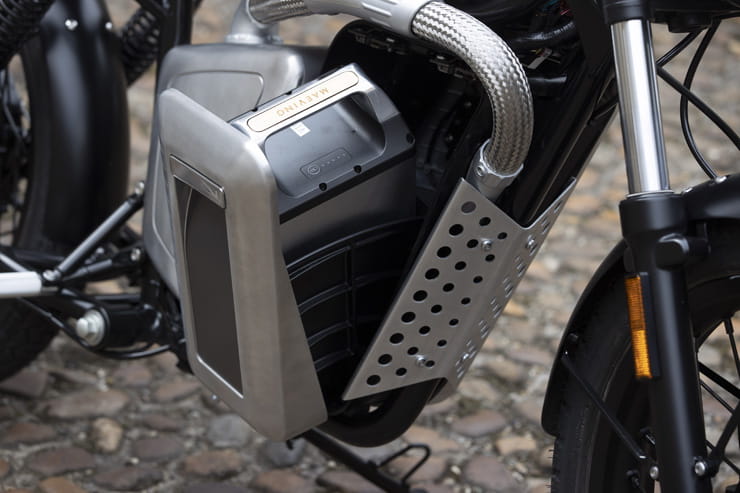 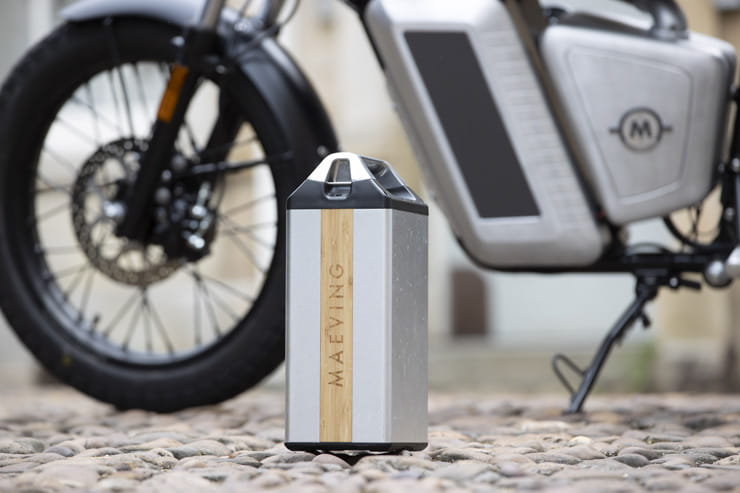 The hub motor is powered by either one or two 12kg Samsung batteries – which you choose depends on how much you want to spend and how much range you need before recharging. The bike comes with one battery as standard; a second is £995 extra. Each battery is good for a claimed 40 miles, so that’s a claimed 80 miles with two batteries. The number of batteries doesn’t alter performance – the Maeving’s top speed and acceleration remain the same regardless.

The first battery slots into the ‘engine’ compartment behind the frame downtube, and a second identical optional battery slides into the ‘petrol tank’ compartment (which also houses USB charging ports). If you just run the one battery, the tank space becomes 10 litres of storage.

The batteries are made by Samsung – industry-standard Li-ion 35E cells come in a smart aluminium casing with a nice bamboo infill for that Hoxton coffee-shop vibe, and are rated at 2.03kWh and weigh 12kg each. Maeving say the batteries ‘retain more than 60% of their capacity after 500 cycles – a cycle being a full discharge then charge of the cell. Samsung states 500 charging cycles equals around 20,000 miles.’ At 60% capacity, a rechargeable battery is about goosed.

A big-battery electric bike such as Zero claims upwards of 200,000 urban miles to 80% capacity for their (much larger) battery, which works out to around 1350 charge cycles. That’s effectively the lifetime of the bike.

Set against that, the RM1’s 20,000 miles doesn’t sound great; a new battery is around a grand. So 5000 miles a year, say, is £250’s worth of battery – and presumably Maeving’s claim of £60 a year running costs doesn’t include battery degradation. It’s still cheaper than petrol, but not by as much as it at first sounds.

A photo shoot is the worst possible way to assess battery range and with only a morning to ride the Maeving, it wasn’t possible to drain it. Extremely heavy-handed use reduced the twin-battery charge (as displayed on the clocks) from 99% to around 70% in 15 or so miles, so there’s no reason to expect Maeving’s claim of 40 miles per battery to be optimistic. 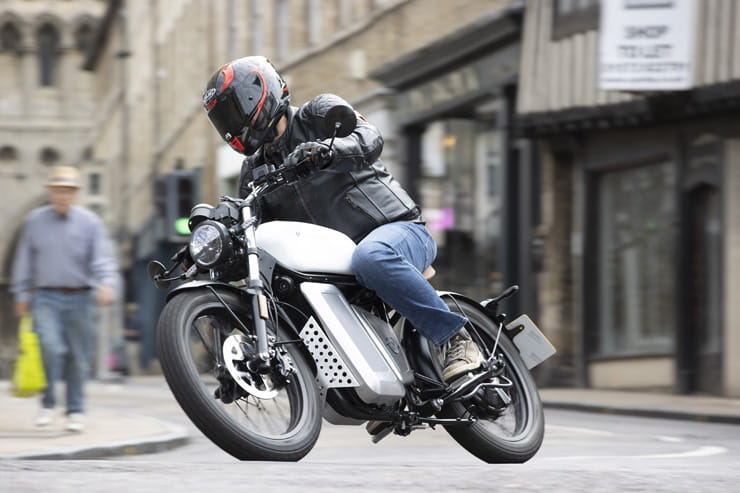 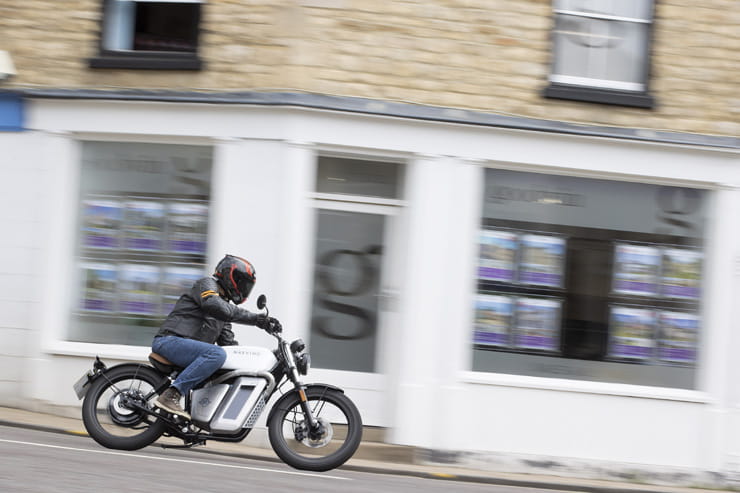 The Maeving only weighs 124kg in dual-battery spec, so it’s extremely light and easy to manage. If you can ride a pushbike, you can ride the RM1. Rear suspension is a pair of rudimentary shocks with preload adjustment and 80mm of travel. At the front live a pair of unadjustable telescopic forks – both the forks and shock are of Chinese origin.

The brakes are also Chinese with a single three-pot caliper and 240mm disc at the front and a one-pot rear disc. In classic twist-and-go format, the front brake is on the right lever, the rear on the left lever; but the rear is actually also linked to the front 60/40. There’s no provision for ABS. Wheels are 19in spoked front and rear, tyres are Dunlop K70s and the frame is tube steel.

The RM1’s chief handling characteristic is light and agile, stable, a doddle to hustle and perfectly adequate for skating around town on – but it’s not got exotic suspension performance or ride quality. My lardy frame uses up enough travel to crash it out over potholes. You get the feeling in sketchy conditions, like wet roads and over slippery changes in surface, the lack of suspension feel and absence of ABS could sap confidence pretty quickly. But in the dry the Maeving is solid and predictable, if a bit bumpy. 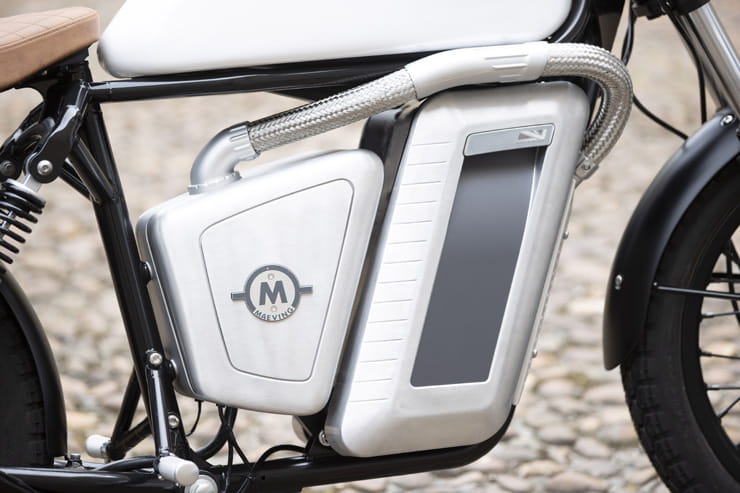 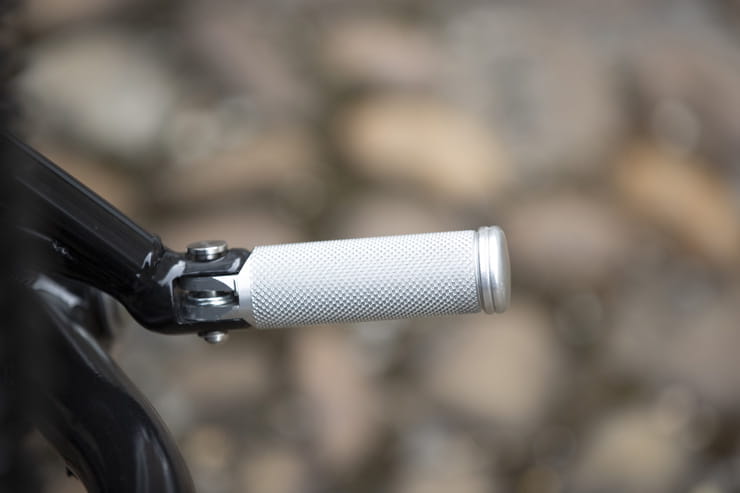 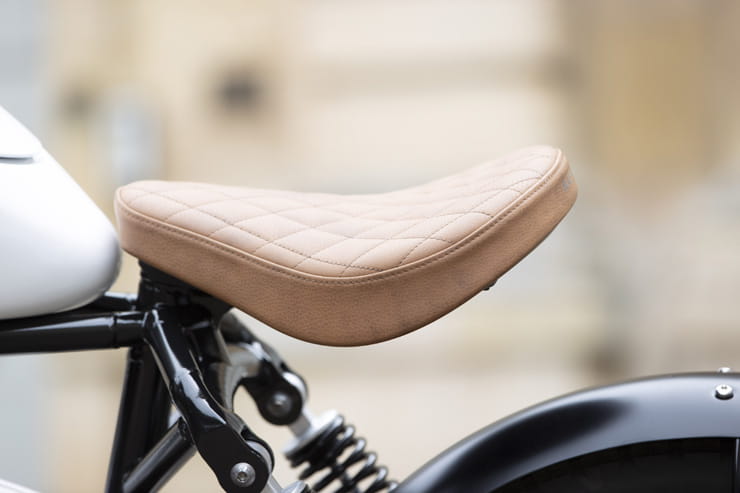 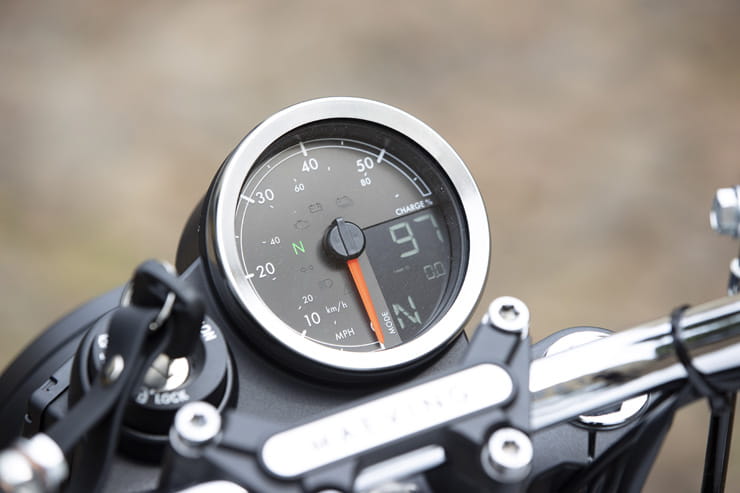 This is the Maeving’s main point of difference with every other electric scooter out there – and on the surface it’s good-looking and well put together. There’s certainly nothing else as striking at this end of the electric bike game.

And nice touches abound – it’s the stuff designed by the company: battery holders, tank and storage compartment with painted-over logo, the way the batteries slot neatly into place, frame and paint finish, wrap-around huggers, extensive use of brushed aluminium, retro leather seat, knurled ally foot-pegs... all this feels quality and adds a veneer of sophistication you won’t find anywhere else.

The RM1 comes in seven colour options: Maeving Blue, Blackout, Silver, White (as we have here), Grey, Green and Sand. 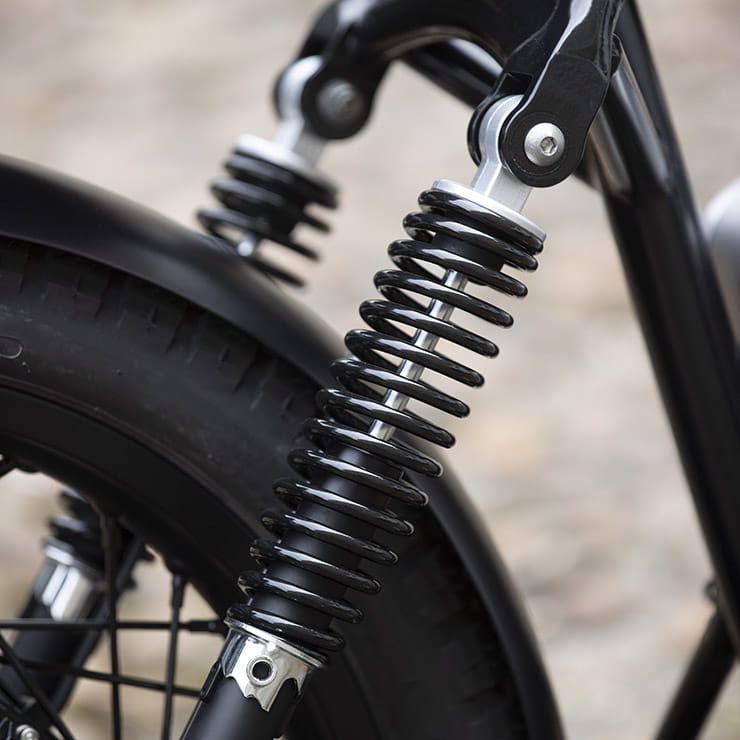 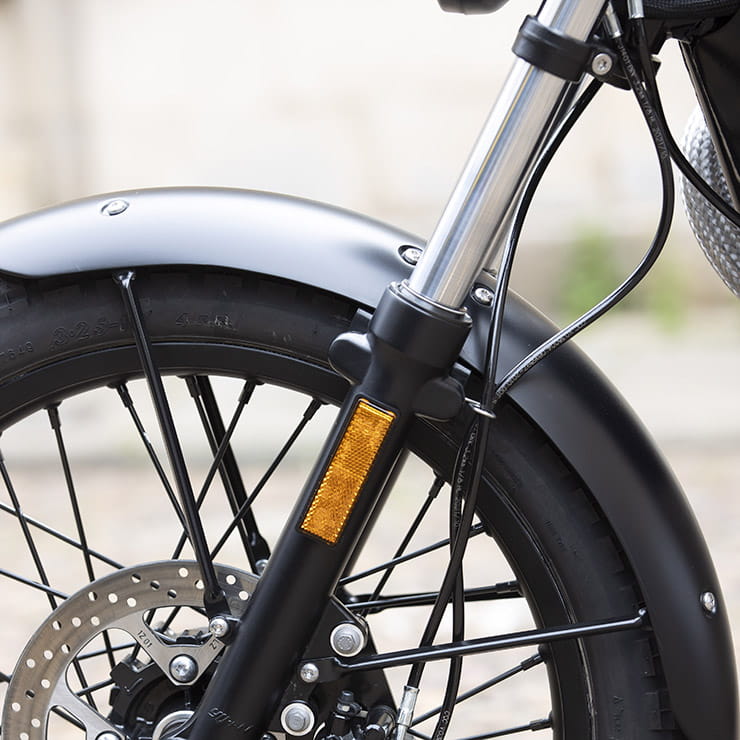 The Maeving RM1 is the first truly retro-styled electric bike and, on basis of its looks, it’s a direct hit. It gets noticed – and you can’t help feeling, for better or worse, image is hugely important to the kind of customer Maeving hope to attract.

When it comes to actually riding the bike, it’s a case of managing expectations. Give the Maeving to a first-time rider who wants to cut a daily dash across the city and they’ll love its convenience, agility and ease of use. Give it to someone slightly more demanding and they might ask questions about battery life, acceleration and ride quality. 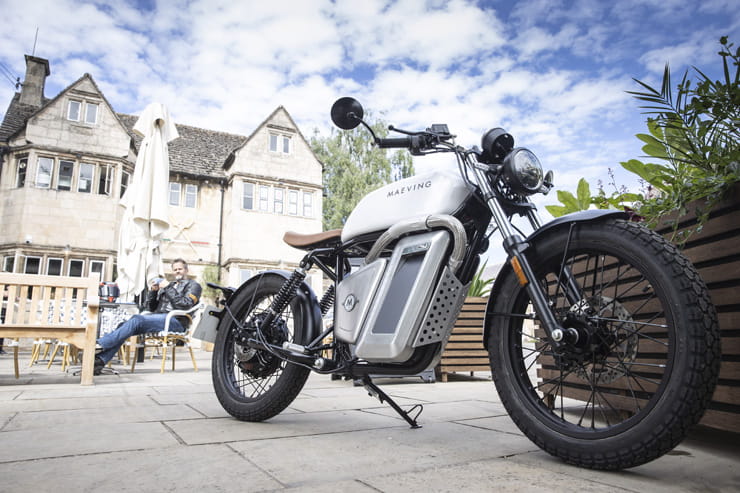