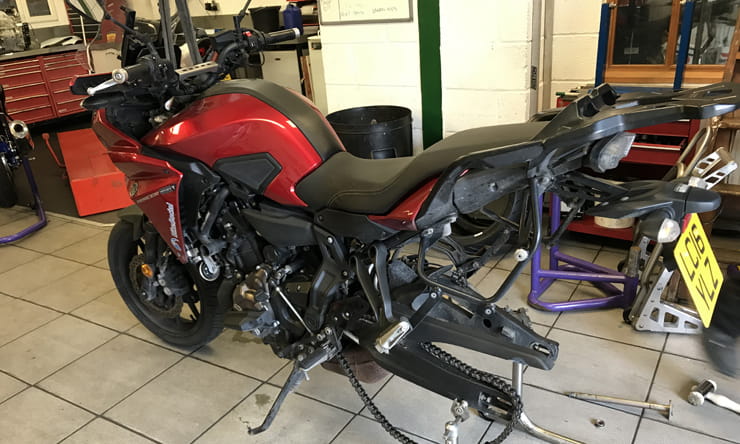 It’s 6:35am and blimey, spring has sprung! After a winter of slush and salt this morning looks promisingly good. The sky is relatively clear and there are even patches of yellow daffodils in the front garden that are beginning to open - ‘Today is a good day’ I think as I wheel the Tracer out of hibernation. With the engine warmed up I head off to give my trusty steed a treat. It’s booked in a BSD in Peterborough to have some new boots fitted, and wow does it really need some new boots! 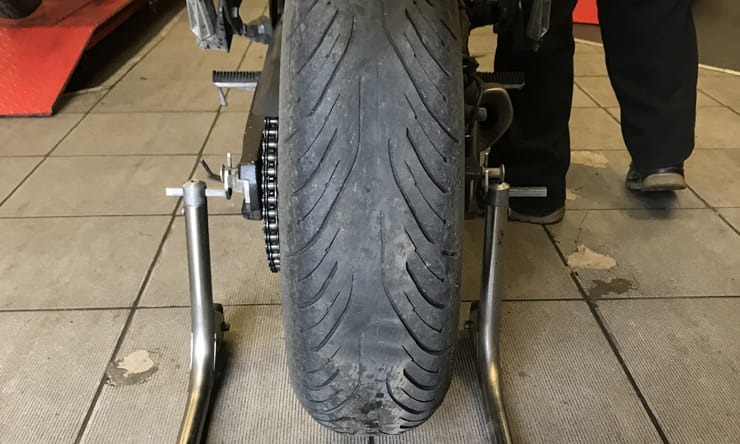 Having lived life mostly in the outside lane for 6500 miles, the original Michelin Road 4s have squared off and we have opted for a set of Metzeler Roadtecs for the Tracer. I'm hoping the wet and dry performance and ability to soak up the motorway miles will be up to scratch. If I’m honest this should have been done a couple of hundred miles ago – thing is when a couple of hundred miles is two commutes to work and back it doesn’t feel so overdue. A square tyre is a horrible sensation to ride on and causes a notchy feeling as you tip the bike into a corner. There is also a sensation of the bike sliding as you move from the fat (and now flat) centre section of the tyre and onto the shoulder. Not only does a square tyre make the bike harder to lean over, it also reduces the size of the contact patch. Combine that with a wet roundabout and liberal sprinkling of salty diesel and you have wandering back end, and mild heart palpitations from me! 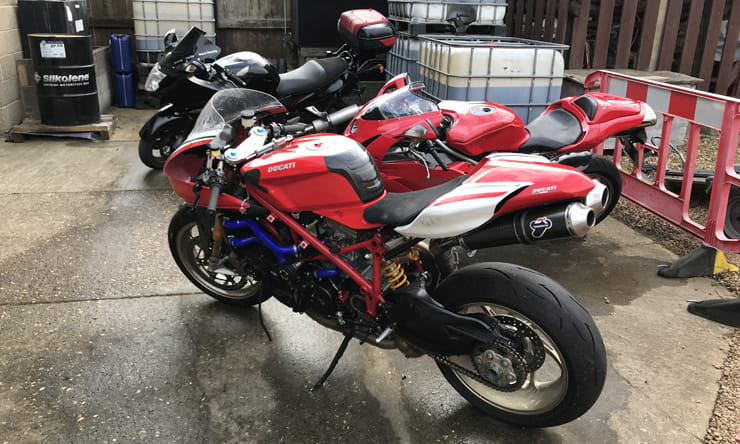 Rolling up the drive at BSD I’m met with the chatter of dry clutches and the rumble of 2000+cc’s ticking over outside the workshop. A Ducati 999s road bike and 1198s trackday weapon sit outside reminding the neighbours who’s boss. Next to the bellow of open Termignonis you can’t even hear the Tracer running, the standard exhaust on this is extremely quiet, to the point that some people I have met don’t believe it’s a 700cc bike. 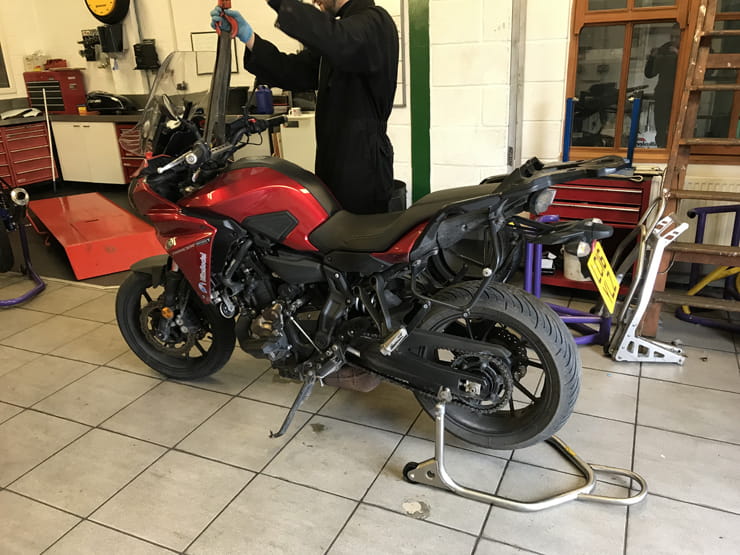 Wheeling the bike into the workshop the boys from BSD set to work lifting the bike front and rear and dropping the wheels out. While they are off breaking beads and other manly sounding tasks, I take the opportunity to have a poke round the Tracer’s underbelly to see how its fared against a winter of salt, snow and rubbish weather. I’m happy to see that the story is pretty good. Other than some fuzzy bolt heads here and there and a mucky looking catalytic converter it’s in good shape. Remember, this is a bike that, even with a load of Yamaha accessories fitted, still costs just a shade over £8k on the road.. You’d think at that price the first thing to age would be fixtures and fittings but hats off to Yamaha; the Tracer is a bike that you can ride all year round in confidence. 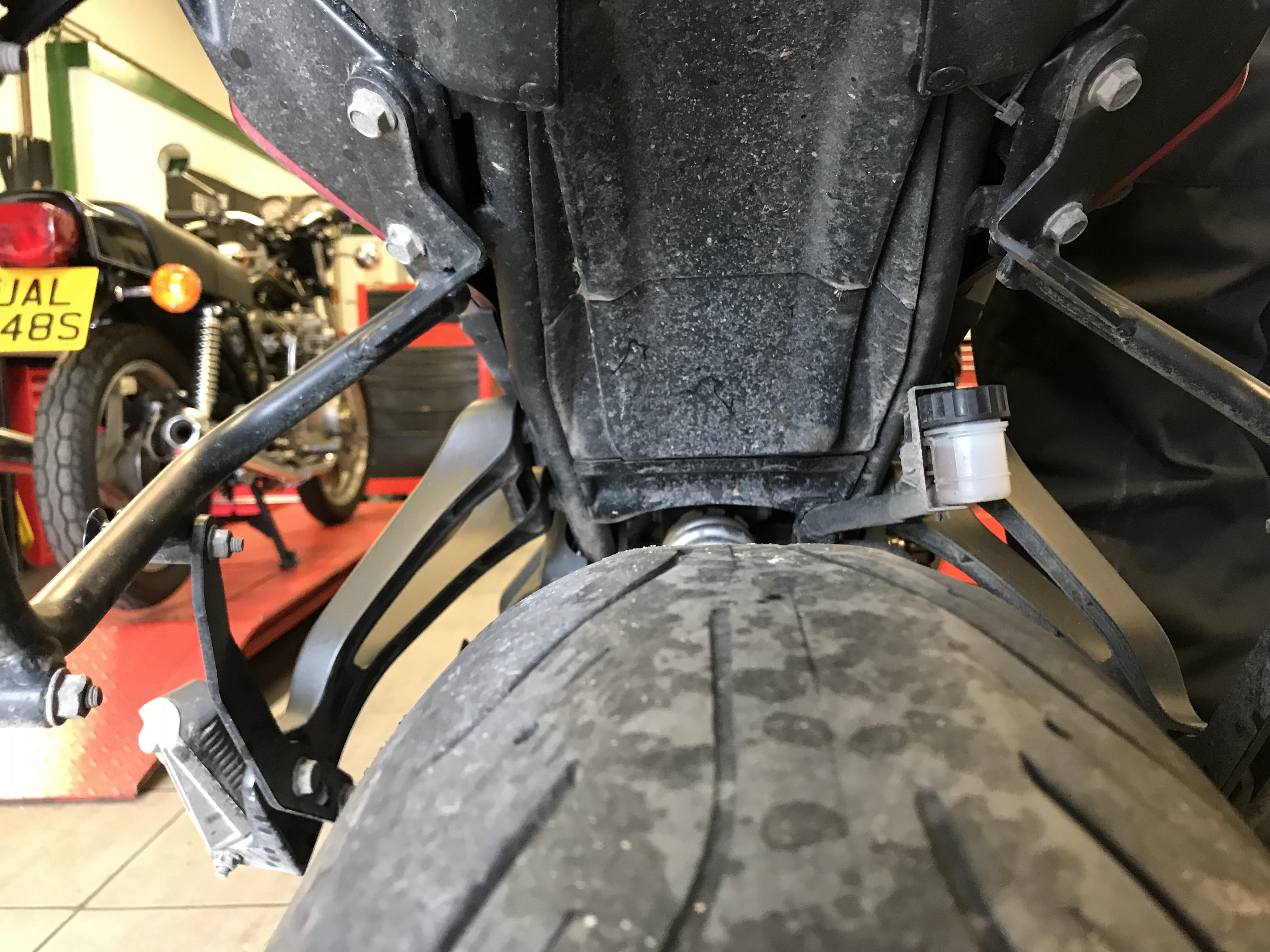 For reference I clean the bike about once every two weeks to remove the grime and salt, then give it a spray with rust protectant but that’s about it. The only other parts of the bike that have suffered are the pipes that run into and out of the water pump. They sit just off the right hand side of the engine and are painted gloss black. They are now stripped of the top layer of paint and looking slightly tired. I’ve searched for a company that sell an aftermarket cover for them but can’t find one, which is a shame. It would be a simple enough job to drain the coolant and remove them and a coat of stone-chip paint would have them looking as good as new. 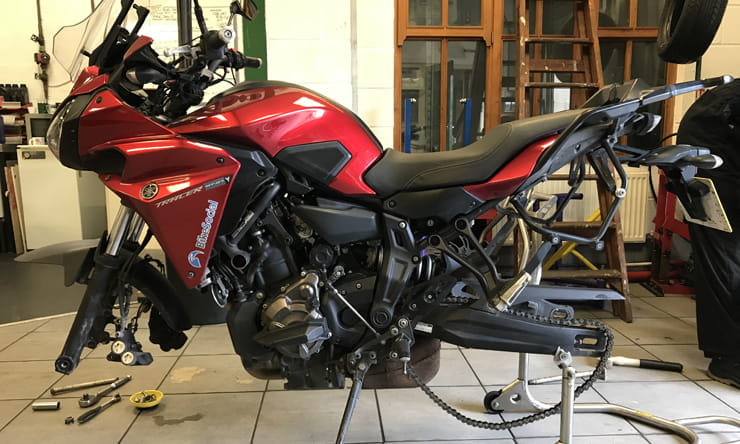 Heading back to the office I take the long route ducking up the A15, through Stamford and back along the A47. I wanted to start working the slippery release agent off the tyres. We’ve all seen the video of the ‘heros’ on superbikes pulling out of bike shops on new tyres, only to fling it up the road at the first sign of throttle – let’s try and avoid that shall we!? I take my time, building up my speed and lean angle slowly, the further I go the better the bike gets. By the time I’m finished the Tracer now feels planted and secure, stable under braking and as fast from ear to ear as I’d want a 200kg bike to be. 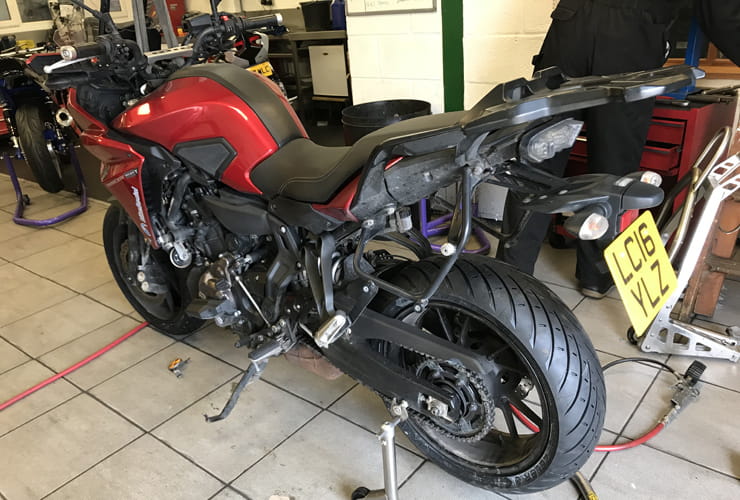 So there we have it, 7000-miles, a trackday at Cadwell, countless close calls with dozy car drivers and winter of dicing with black ice. The Tracer has left its mark on me, it’s been my office and my method of unwinding. I’ve toured on it, scratched on it, done business trips on it. It’s never let me down and has always had more performance, grip, stability and speed than I have talent and bravery. I don’t see the Tracer as a bike any more, it’s more like a mate and a damn good one at that. 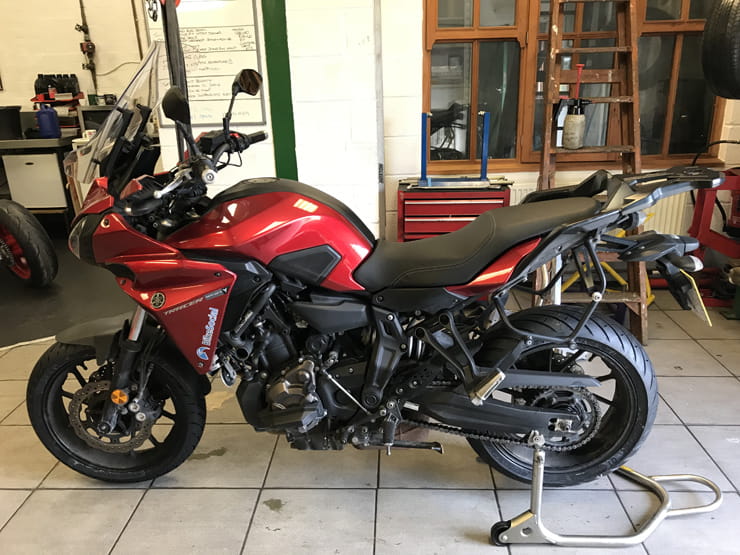 For more information on the Tracer 700 head to: www.yamaha-motor.eu/uk