What’s the point of the Yamaha Niken? Filtering and (nearly) crashing 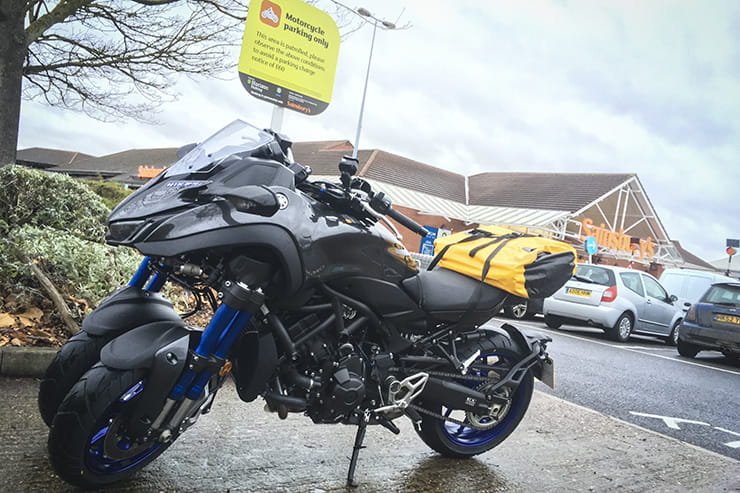 The Yamaha Niken will be known as one of the most divisive bikes of our time. Some people think it’s a trike, or that it’s for disabled riders. They think it won’t ride like a ‘normal’ motorcycle.

The Yamaha Niken is classed as a motorcycle by the DVLA. It’s got two wheels at the front, but they’re not far enough apart to mean this could be ridden on a car licence by those who took their driving test before January 19th 2013. This bike (and I know there’ll be umpteen comments about the use of that word) is not just for unconfident riders, or as the most ignorant might put it; ‘for the not-a-real-biker type of biker’. It’s for those who want to enjoy riding even more, on any surface.

I ride through the year, but this thing is already making me enjoy my daily commute – not to mention weekend blasts – so much more, thanks to the added stability offered by an 80% larger contact patch. Why not 100%? Simply because each of the two front wheels is 15”, rather than the 17” average of a motorcycle.

I’ve got a Yamaha Niken on long-term test over the winter, and intend to make a series of videos in which I can share what it’s really like to live with, and answer some of the most pressing questions…

Can you filter (lane split) on a Yamaha Niken?

Because the widest point on the Niken is its bars, yes, you can. It’s not quite as easy as something like the MT-09 upon which it’s based – I’d say it’s about 20% harder – but it’s certainly easier than an adventure bike with panniers on.

But there is a caveat: the mirrors are set at the same height as most car mirrors, so you can’t easily shimmy through like you normally would; I wish Yamaha had put the mirrors on the bars. I’d do it myself, but there’s only a blanked-off mounting point on the left bar, not the right…

Filtering on a Niken

Can you crash the Yamaha Niken

Taking the Niken out for a ride on some twisty back roads, I didn’t want to prove a point by seeing if I could fall off it – I just wanted to see if I would get any more enjoyment out of the machine than I would if I was on something like an MT-09.

I did, because I spent less time clenching my bum cheeks as I tipped into damp bends. But I also found out that it WILL lose traction when you hit mud, and it really DOES feel a lot safer than a ‘normal’ motorbike.

Back roads on a Niken

The roads were damp, the temperature about 6°C. I knew the Yamaha wasn’t ‘uncrashable’, but it does give more stability.

I’m far from the fastest journalist on press launches, but I’d still say I’m a reasonably confident rider; I’ve owned more than 15 motorcycles, and of course that’s not counting press bikes I’ve had on loan like this one. I love riding.

The Niken is of course based on the MT-09; it’s got the same glorious, punchy three-cylinder engine, though I do have to point out that the two-wheeler weighs 193kg. This is 263kg. But it is meant to be a sports tourer, and the FJR1300 – for example – weighs 289kg, while the Super Ténéré is 265kg, so this is comparable in weight to other bikes. It certainly doesn’t feel heavy when you’re riding it.

And with a load capacity of 195kg – just 8kg less than the FJR, or 18kg – the Niken does have the capability to lug the average rider, passenger and luggage all over Europe and beyond. The fly in that ointment though is the 18 litre tank, which sees the fuel gauge flashing after 140 miles on the motorways, and a range to empty of about 165 miles.

Moving it around in the garage is fine – easier than the tall KTM 1050 Adventure I used to own. The only thing I have to watch is that the front wheels can catch on my ground anchor as they’re not where I expect them to be.

Is the Yamaha Niken a trike? No, it’s a motorcycle. The DVLA classes it as such, and it rides just like any other motorcycle. It is NOT a trike. The wheels are too close together to be classed as a trike for a start.

Will the Yamaha Niken stand up on its own? No, it still needs a side-stand and will fall over if you let go of it. This honestly feels just like any other motorcycle to ride, regardless of how many wheels it has.

Is it meant for unconfident riders? No, it’s not just for unconfident riders. And it’s not for riders who ‘still need stabilisers.’ It’s something different – we need to accept and celebrate that. The extra front wheel does add confidence, but that means that any rider of any experience can enjoy their bike even more, right through the year.

Can you still filter on it? Yes, you can filter on it, and the more I ride it, the easier it’s getting to dive through traffic. But those mirrors – being the same height as most car mirrors – do get in the way; I’ve had to fold them in on occasion.

What’s the Yamaha Niken’s top speed? It’s restricted to 136mph, but it pulls strongly all the way up to that. If that’s too slow for you on the road, then you probably won’t hold your licence long enough to worry about it.

• Its load capacity is 195kg, making it a good sports tourer

• It really is more stable when it loses grip

• Less open-minded riders sneer at it

• I need to get some luggage on it