Life with a Yamaha Niken | Economy, servicing and pillion comfort 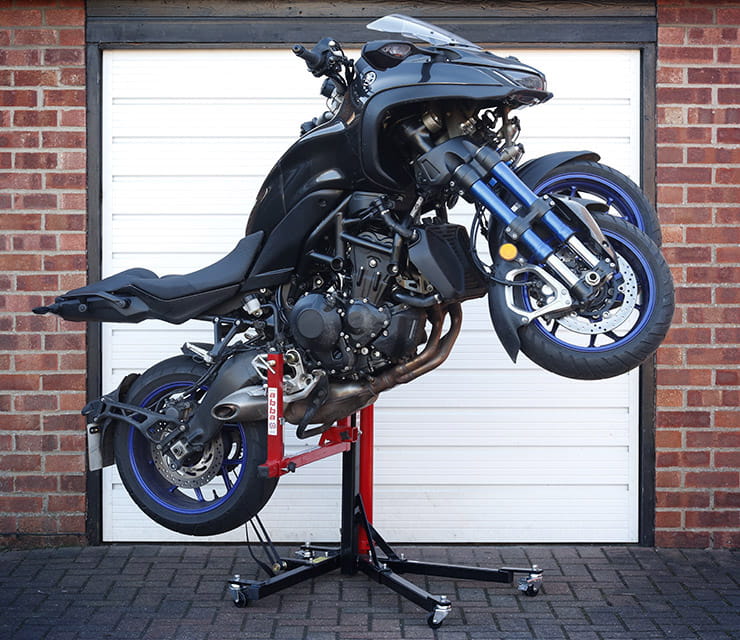 The Abba Skylift has no problem picking up the Niken

Over the last few months I’ve racked up the miles on the three-wheeled (it’s not a trike) Yamaha. Think of that extra 15” hoop more like one wheel split into two, rather than two separate wheels and you’ll get an idea how it feels and works, but the gist is that the Niken handles like pretty much any other big bike… it’s just got the bonus of an underlying feeling of stability.

I’ve slid the front a few times, and while I’m probably pushing a little harder than I would on a ‘normal’ bike, it does make me wonder how much effect the additional weight high up on the front is making to the centripetal force acting on the bike. Still, when it does go – especially the time I hit sheet mud – the Yamaha doesn’t feel like it wants to tuck under itself like a machine with two wheels can. 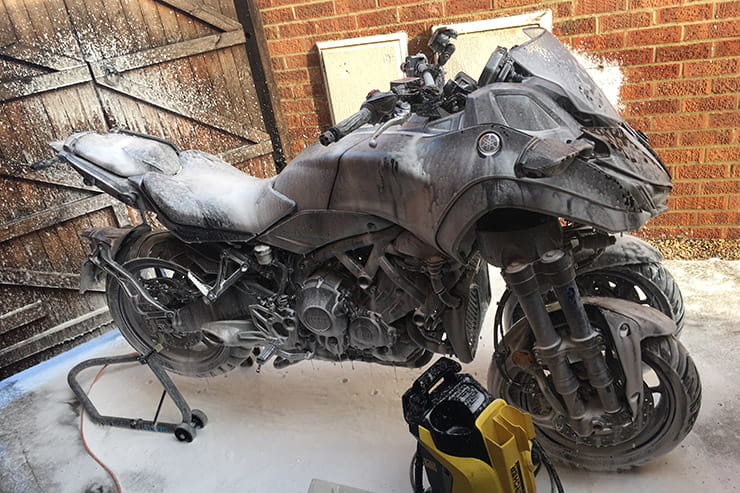 The Niken’s having a hard life with all the salt on the roads, but the finish is holding up well

What’s the point of the Yamaha Niken?

Put simply, the point of the extra wheel on the front of the Niken is to add grip. Or is it to increase the contact patch? Oh, hang on, that’s influenced by the weight and the tyre pressure, not the number of tyres. The answer to what kind of grip and contact patch advantage you might get with the Niken is coming soon, but the increased stability, and undeniable confidence that the machine offers is what could make it a great tourer. Not convinced about the confidence thing? Check out what happened when we took some BikeSocial readers to a test track here.

Is the Niken the best touring bike?

Sure, the Niken’s relatively heavy – at 263kg, fully fuelled, it’s 70kg heavier than the MT-09 with which it shares its engine. But it’s 26kg lighter than the much-loved touring FJR1300, and that’s important because the Niken’s maximum payload capacity is just 8kg less than that of the FJR, which means it’s got the capacity to carry a decent amount of luggage along with its rider and pillion.

Yamaha only currently offers panniers (semi-hard zipped, not hard with a lock), but fortunately Shad is offering some full hard luggage – it could be what’s needed to help the Yamaha make more sense.

The trouble starts when you put a pillion on it… I took BikeSocial’s production editor, Steve Lamb, to Yamaha HQ in Surrey – a two and a half hour, 120 mile journey that we ended up doing through rush-hour traffic in the freezing cold (and some light snow).

Steve was burdened with my rucksack, and he was not happy by the time we got there; “It’s really uncomfortable – my bum took all of the weight.” Granted, he had a load of camera kit on his back, but his complaint was not with the seat… it was with the position of the pillion pegs.

“I just couldn’t take any weight off my behind,” he told me. “Like a feet-forward bike, all of your weight is taken by your bottom; all I could do was push myself backwards, not lift myself up. I couldn’t even easily get both hands under to hold both grab rails, so couldn’t give myself a break with my arms.”

Steve’s 5’6”; perhaps a little shorter than the average male but not by much. And without taking a sexist view, the majority of pillions are likely to be female – Steve’s slightly taller than the average UK woman. My wife will be going further on the bike soon, so we’ll see how she gets on with it…

Compared to the MT-09, the Niken’s pegs are much further forward

Something else that stops the Niken being a great tourer is the tank range. I’ve been averaging 42mpg, which means a theoretical range to empty of 167miles from the 18 litre tank. Typically, by 140 miles, the fuel light comes on. The furthest I’ve left it with the light on before filling up has been 25 miles.

According to fuelly.com, which creates averages of fuel economy based on submitted data, one Niken owner has averaged 54.3mpg over 920 miles. Given the minimal sampling base, perhaps a more useful guide is the 48 MT-09 owners who, on models spanning 2013-2017, claimed to have covered a total of 212,444 miles; their average economy is 50mpg.

I tend to be a relatively inefficient rider, but the Niken is 27% heavier than the MT-09, so I’d expect economy to drop. Even given 50mpg though, the range to dry would be 199 miles, so you’d be looking for fuel at around 170miles. An extra few litres would have been appreciated on a tourer – the FJR’s got a 25 litre tank.

One thing that has helped elevate this bikes status is the optional (£151.10) heated grips that Yamaha fitted while the bike was in the workshop. These plug into sockets that are ready and waiting under the front left fairing, and are operated using the left switch gear. They feel no fatter than the original grips, but they warm up quickly and feel great.

Also very impressive is how the cables tuck well out of the way – on the throttle, the power lead is integrated into the grip, so doesn’t get constantly stressed like some. On the left grip, the cable clips very neatly into the body of the switch gear. Good work Yamaha, and winter riding is now a whole lot more pleasant… 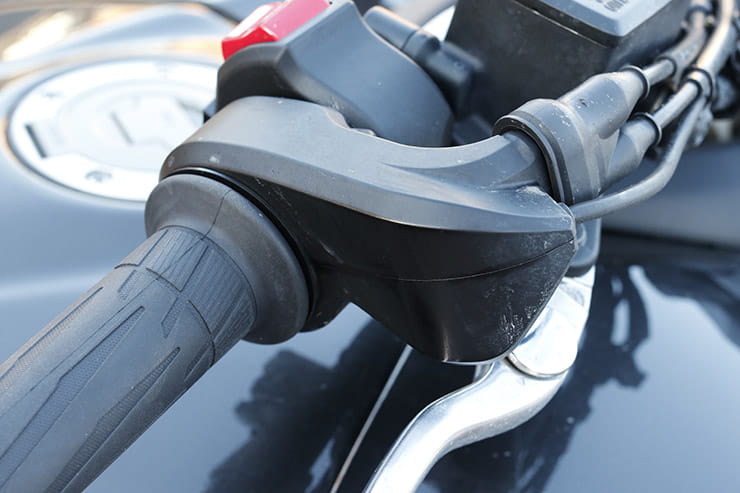 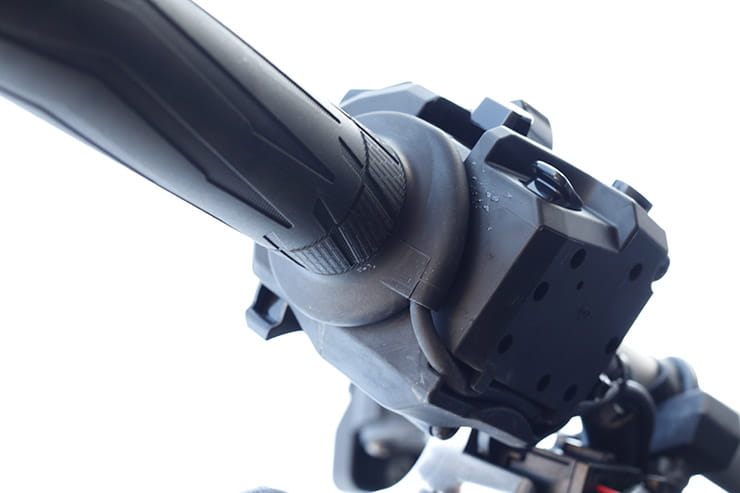 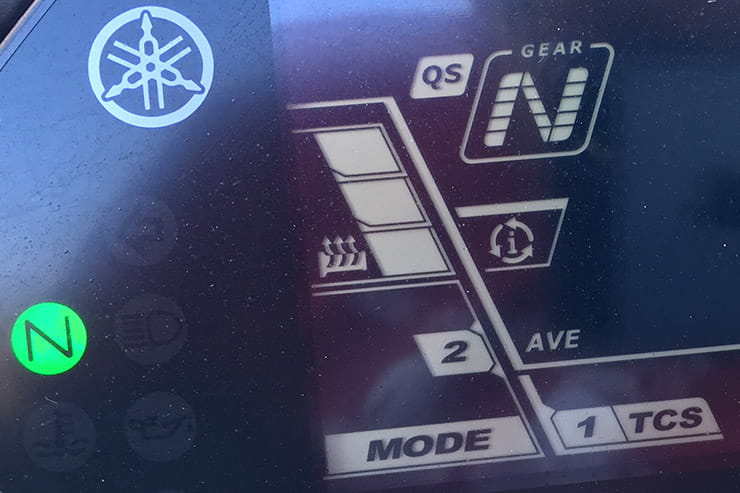 Is the Niken more expensive to service than a two-wheeler?

One comment that regularly surfaces when BikeSocial posts anything on social media about the Yamaha is that “it’ll be really expensive to service” thanks to there being twice as many forks, and more bearings in the steering. Even the brakes have been held up as being more hassle, so here are the facts:

Engine: It’s the same as the MT-09, so will be no more time consuming to work on, and it has no special parts.

Transmission: Again, it’s the same as the MT-09… six speed, with a chain final drive.

Brakes: It has two calipers on the front, just the same as the MT-09. Nothing to worry about here.

Forks: Yes, there are an extra two fork legs, but only the rear legs have any oil in them. With the front two legs simply being sliders, you won’t have any issues with the seals.

Steering bearings: This is where the additional cost of the Niken’s servicing comes in. According to the workshop manual, at 12,000 miles the steering assembly needs to be stripped, checked and re-greased. It’s the same interval on the MT-09, so Bill Younger – workshop and warehouse supervisor at Yamaha Motor UK – tells me that he’d expect the Niken to take about an hour longer to work on. And that’s it.

Of course, if the bearings are damaged on the steering assembly, costs will increase, but looking at the loads they’ll be subjected to, and assuming they’re not blasted really close with a jet-wash to blow the grease out, there’s little reason they should need any attention for a very long time.

So ultimately, there’s minimal cost implication to maintaining the Niken. You do have an extra tyre to buy, but the wear will be spread between the two…

Someone rightly questioned how hard this bike would be to MoT as the front wheels might not fit on a test centre’s roller. I asked Nick Nomikos, an MoT tester and owner of The Two Wheel Centre in Harpenden – he told me that while he (and many other stations) still use a cable gauge to drag the bike while the brakes are on, if he was using a roller he’d simply test each wheel separately.

A centre-stand is fitted to the GT version of the Niken, and I’d expect it to be an option on the standard model, but I popped on some Evotech paddock stand bobbins, which makes cleaning and lubing the chain a lot easier. But what about the front? Yamaha has a stand for its workshops, but for anyone at home, the best bet is definitely an Abba stand – It’ll easily pick up the Niken. 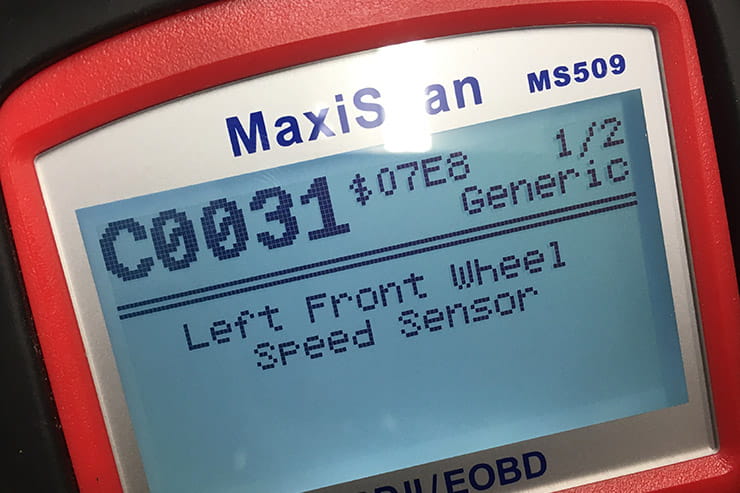 Like other bikes with ABS and traction control, if you run the Niken on a paddock stand, it’ll throw up a fault code; two in the case of the Niken – one for each front wheel. You can cancel them easily using a code reader, or take it to your local dealer

• Increased confidence thanks to the stability

• Having someone shout across the road to me “Oi mate, did you get that made specially for you?”

• Seems uncomfortable for a pillion

Is the Yamaha Niken a trike? No, it’s a motorcycle. The DVLA classes it as such, and it rides just like any other motorcycle. It is NOT a trike. The wheels are too close together to be classed as a trike for a start.

Will the Yamaha Niken stand up on its own? No, it still needs a side-stand and will fall over if you let go of it. This honestly feels just like any other motorcycle to ride, regardless of how many wheels it has.

Can you still filter on it? Yes, you can filter on it, and the more I ride it, the easier it’s getting to dive through traffic. But those mirrors – being the same height as most car mirrors – do get in the way; I’ve had to fold them in on occasion.

What’s the Yamaha Niken’s top speed? It’s restricted to 136mph, but it pulls strongly all the way up to that. If that’s too slow for you on the road, then you probably won’t hold your licence long enough to worry about it.