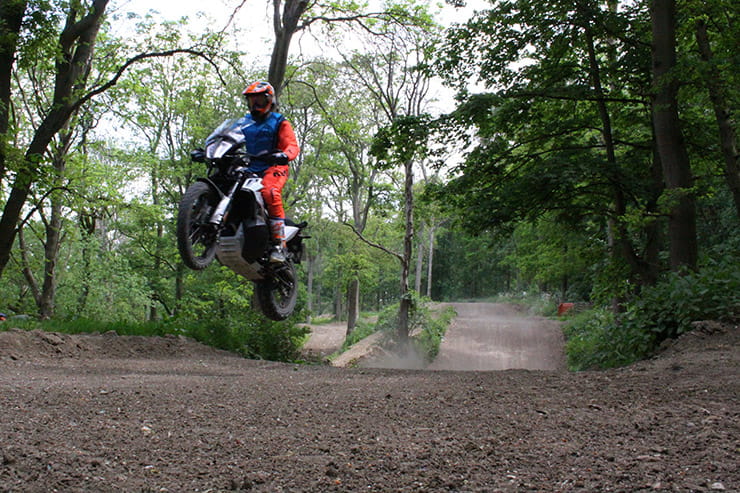 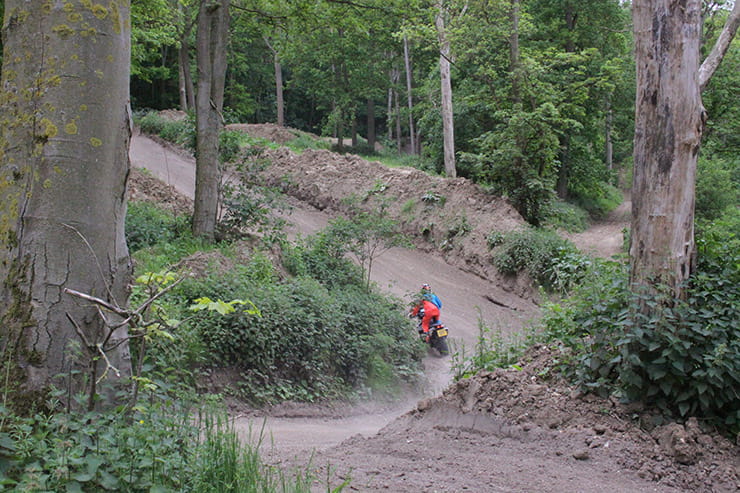 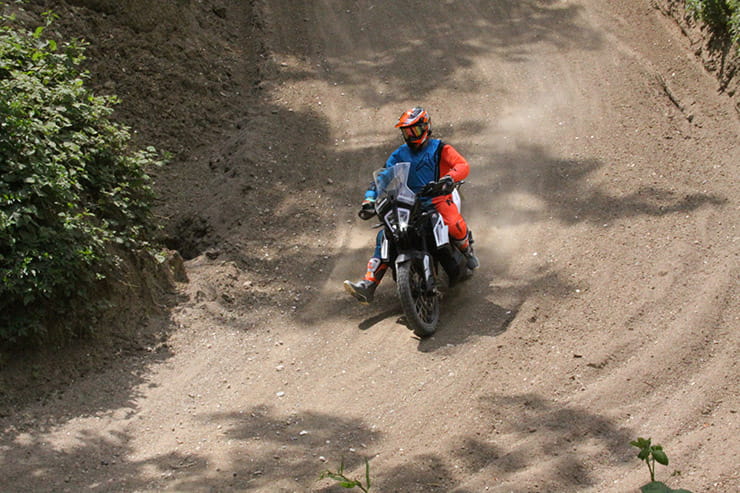 With thanks to our sponsor, Bridgestone. The KTM used Bridgestone Battlax A41 tyres

It makes twice as much power as a motorcross bike so it must be twice as fast, huh?

If you are doing serious off-road work on your 790 Adventure then KTM strongly recommend that you buy the R version which has longer-travel suspension with a lot more adjustment. BikeSocial has already tested the Adventure R twice off road and we wanted to see how good the standard bike could be. We know most owners of this 200kg+ adventure bike will limit their off-roading to some simple trails and, originally, that was our plan. But then we also figured that by going to our local MX/Enduro track we could repeatedly and consistently test the KTM’s electronics better – like an off-road test track. Plus, being able to do laps would make it easier to get photos and video footage.

Ashdown Farm in Oxfordshire has an adult track, a junior set-up and some enduro trails and we could hire it exclusively for a reasonable rate. There are slippery, steep inclines which are perfect for testing the traction control and braking systems and the tight, twisty junior track should challenge the nimbleness of a bike weighing twice as much as my motorcrosser, while making twice as much power too. The standard 790 Adventure has no suspension adjustment other than rear preload so all we could do in preparation was to swap the tyres for Bridgestone motorcross rubber. 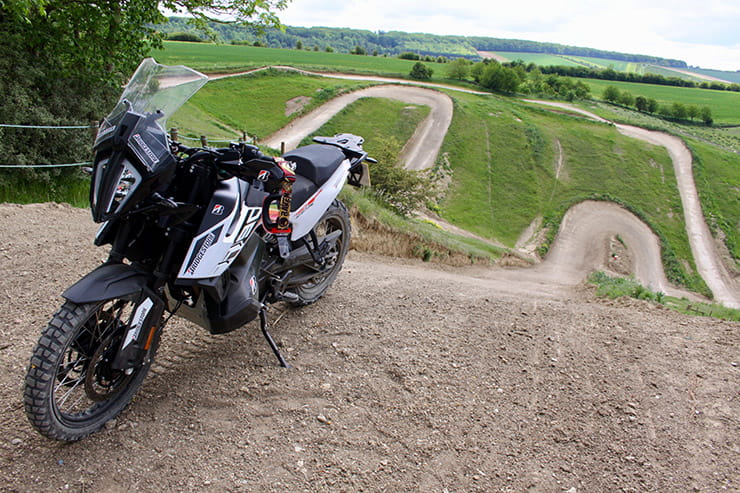 Ashdown Farm – our off-road test track for the day

The Adventure R had proved very capable off-road, but to be honest I wasn’t expecting too much of the standard bike in such a demanding environment. So I was very surprised with how effectively it raced up the slippery hills, moving predictably from side-to-side, with a small amount of traction control dialled-in. The engine delivers power in a very controllable way and the gearchanges (helped by the optional quickshifter on this bike) are slick and dependable. Even more impressive were the descents. With a full tank of fuel (don’t ask) and rider the KTM weighs around 300kg but managed a fuss-free, controlled ride every time. The electronics allow you to turn off the ABS on the rear, but still have it on the front brakes. It’s a good system too, giving lots of feel and working well with the engine braking to boost confidence.

A quick thrash round the Junior circuit was interesting and showed how nimble a bike this size can be. It was easy to drift the bike from almost full lock left to right and back again.

It steers well and the suspension keeps things mostly controlled, although on these surfaces it does feel a little too soft.

Interestingly Steve found the opposite on the road – describing the standard settings as sportily firm. That kind of flexibility is impressive. If one set-up can be stiff enough for tarmac, but able to go this quick off-road, then KTM are doing something very right.

Of course, it didn’t take long for things to get giddy. With new-found confidence, a video camera pointing at me and a few tempting jumps to play on, the day was always going to degenerate into lunacy. 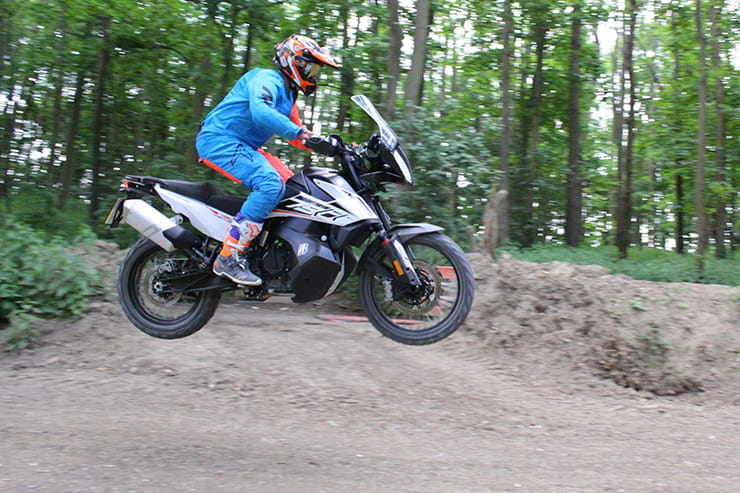 Firstly, I’d like to report that this 209kg adventure bike with all road-gear still fitted can jump surprisingly well. The soft suspension protests when you land it (but so would I if you landed that much weight on top of me) and sometimes needs a second go – compressing, extending and then compressing again - before settling. But it works well enough for me to approach the limit without thinking that there might be one. 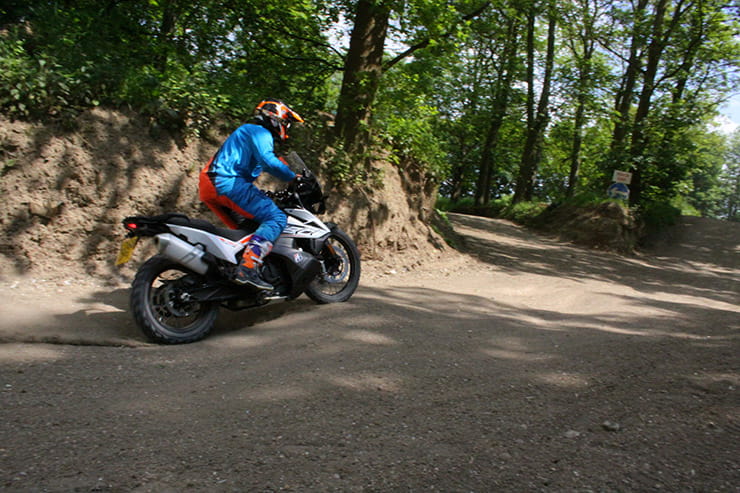 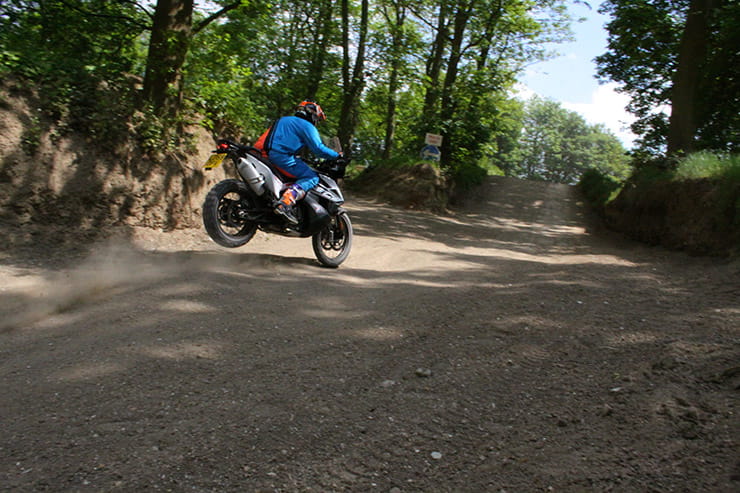 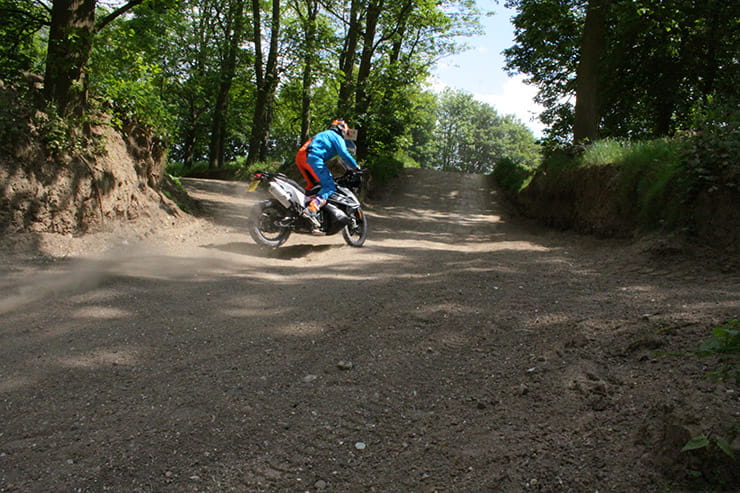 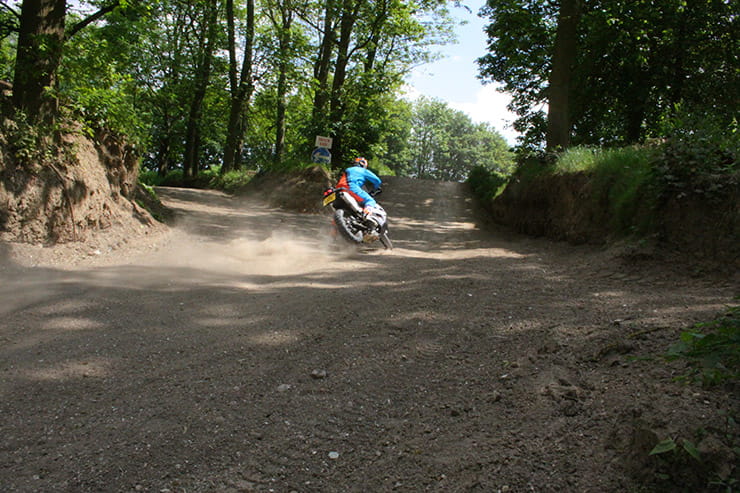 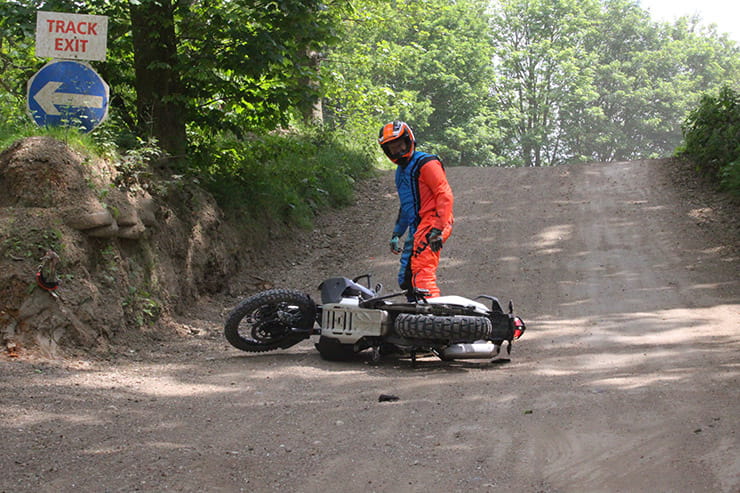 Crashing is part of off-roading. It happens to everyone. Thankfully, the 790 Adventure crashes well – minor cosmetic damage only.

That limit was found just after lunch. I let the rear wheel dip into a rut which bounced high back up in the air, pitching me forward over the handlebars. As the rear wheel came down  it hit the edge of another rut, which flicked it sideways at an angle, kicking up the rear of the 790 Adventure into a twisted shape was never going to end well.

Apologies to KTM for the damage, which was light and cosmetic (and, in case you are interested, the saddlebag fuel tanks were completely undamaged), but shouldn’t have happened. Sorry.

But here’s the thing. You frequently crash on a motorcross track because you are always looking for the limit. I should have known better, but the fact is that by the time I found the limit on the 790 Adventure I’d taken so many liberties I’d forgotten what I was riding.

And that’s probably the biggest compliment I can pay it