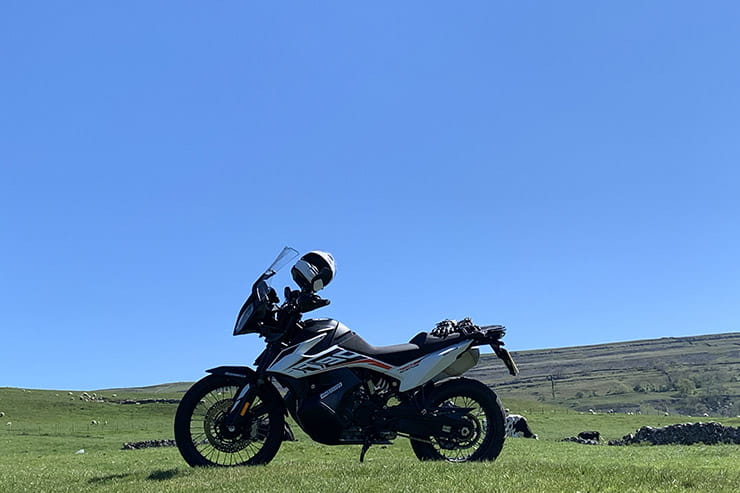 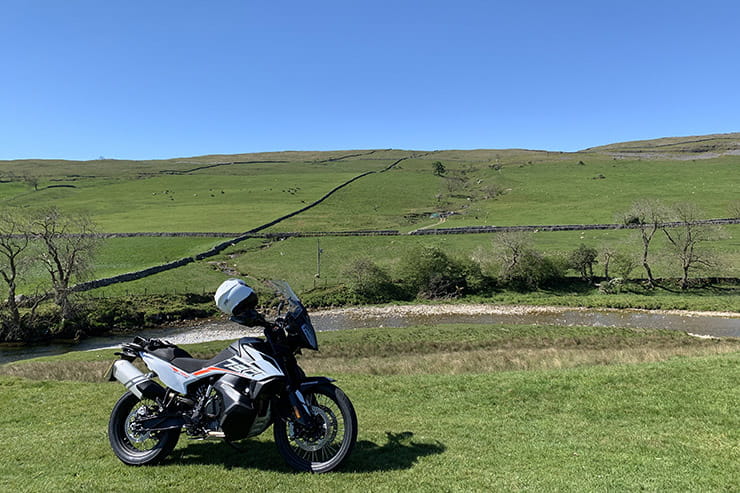 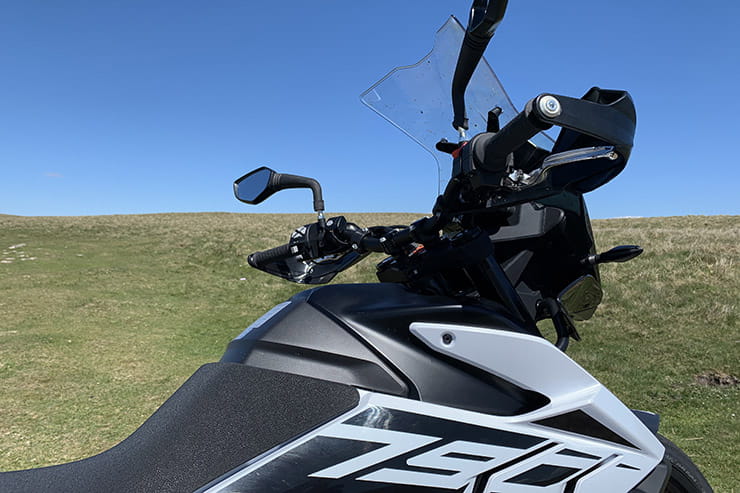 With thanks to our sponsor, Bridgestone. The KTM used Bridgestone Battlax A41 tyres.

Six hours and forty-one minutes. That’s how long it takes in the saddle of KTM’s new 790 Adventure before I start to notice the first twinge of arse-ache. Impressive, but the asterisk here is that it’s not 401 minutes of continuous riding, obviously. These days I tend to ride for 90 minutes, stop for ten and repeat. Chuck in lunch, a whole load of quick breaks to take photos and the time-in-saddle versus time-since-leaving-home gap grows. By the end of today I’ll have been out for 710 minutes (11 hours, 50 minutes) and been riding for 499 (8 hours 19 minutes) of them and covered 480 miles at an average speed of 58mph.

Day one of BikeSocial’s ‘Adventure Week’ on KTM’s 790 Adventure couldn’t have gone any better. The idea is to have a year’s worth of adventure in seven days, combining the toughest road test route we know, with trips to Scotland, the North Coast 500, chasing a ferry and then testing the performance on the Isle of Man Mountain Course, testing its off-road credentials on a properly scary motocross course and finished off with a couple of more gentle, ambling, ‘let’s-just-get-lost’ adventures in the bits of England where no-one else goes.

Today is the road test. It’s a 440-mile route I devised back in the olden days of carburettors and sports bikes for a magazine with the ambition and the budgets to do such crazy things. It’s not ‘Britain’s greatest motorcycle roads’ it’s a test route. Which means it purposely includes long sections of motorway just when your body needs them least, along with busy, fast (and slow) A-roads to test overtaking ability. Then there are the handful of busy towns to measure commuting skills and a mixture of some of the trickiest, bumpiest and most challenging B-roads ever to come face to face with a motorcycle chassis. If a bike has ability, this route will find it, but if there are flaws, they stand out a mile. 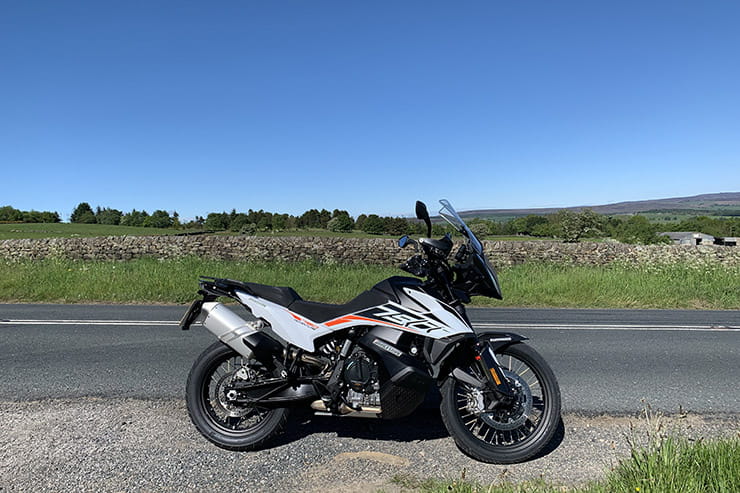 To turn this test route into an adventure, today will also feature a couple of wild card roads. One is a B-road that should be amazing, but is always busy and has fallen into bumpy rack-and-ruin, almost impossible to ride fast. The other is a 22-mile, gravel-surfaced cart track, wide enough for one vehicle that goes over a whole Pennine from Cumbria into Northumberland. Even BMW’s mighty GS struggled on this one, so it’ll be interesting to see how the KTM copes.

No one buys a bike because it works well on a motorway, but many of us curse what we do buy when it turns out to be a vibey, thirsty, uncomfortable, noisy, turbulent, badly-geared nightmare. Thankfully, the KTM is only one of these. The screen, even in the tallest of its two positions is very noisy. There’s none of the head-shaking turbulence that you get on some bikes and you soon get used to it, but even with ear-plugs it’s loud.

Apart from that the 790 Adventure works really well here. The twin-cylinder engine cruises easily at motorway speeds, with plenty of midrange in reserve for lazy top-gear overtaking. The seat is firm but comfy and stays that way for ages, there are no vibes through the bars, tank or foot pegs and fuel consumption averages 58mpg.

The second stint of motorway riding is the killer on this route. Three hours from home, almost always in evening rush hour, it tests a bike’s manoeuvrability and fast-filtering skills with a knackered rider aboard. Again, the KTM delivers. Snicking through the traffic with enough presence to be seen, the right gearing to just leave it in third for smooth, predictable drive and mirrors that are taller than the cars, but lower than the vans so don’t get in the way.

Optional quickshifter works really effectively up or down. Gearlever is set for motorcross boots – too tall for road kit

Bank-holiday Friday is not the smartest time to head for the Yorkshire Dales and Lake District, via Lincolnshire. The roads are clogged with caravans, trucks, slow, ancient drivers who haven’t looked in their mirrors since 1978 and aren’t about to start now. Picking a fast route this lot is challenging. The right bike is one that translates thought into some kind of telepathic movement and the 790 Adventure seems somehow to be always in the right gear, right revs and perfectly positioned for the safest, smartest overtakes.

Like the motorways, these aren’t the reasons we buy a bike, but they are the things that frustrate us when we buy the wrong one. There’s a poise and a stability from the KTM’s riding position and firmly-damped suspension that brings confidence and consistency. Shutting the throttle and dabbing the well-set-up quick shifter takes off a few mph without upsetting the bike, before cracking open the throttle unblocks the road and catapults you to the front of the queue like a much more talented rider than you are. The handlebars are wide, but not daft and the rest of the bike is surprisingly compact. Pride of place for overtaking goes to the engine and gearbox though. KTM’s middleweight twin fuels perfectly and always has power right when you need it, whatever the gear. 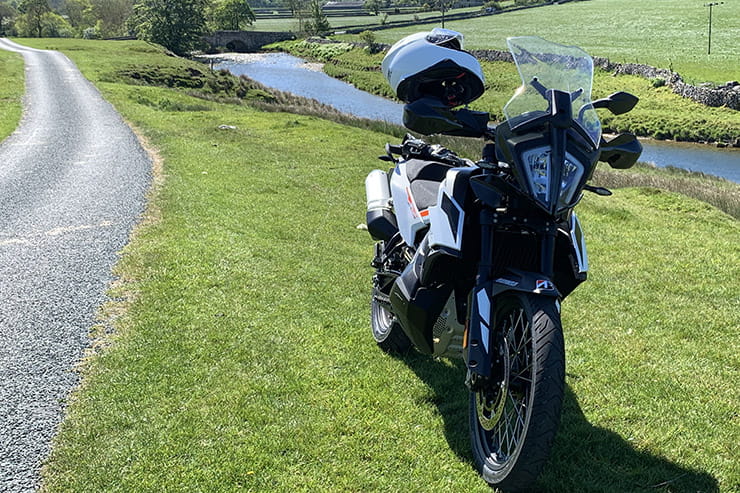 The perfect bike for knackered country roads? Steve thinks so

The best biking road in England?

There is a short stretch of this test route from Hawes in the Yorkshire Dales down to Settle via Ribblehead that I would argue is as good a biking road as anywhere I’ve ridden. The first ten miles on the B6255 are simply magical and worth the 12-hour day to ride up and down on their own. Relatively smooth tarmac, mostly open corners (at least open enough to know roughly what happens next), stunning scenery, not too many sheep and can be ridden as fast or slowly as you want. The KTM is stunning on this road. Fast, sharp, steering quickly-but-confidently and feeling surprisingly firmly-suspended for an adventure bike. KTM’s 790 Duke – supposedly a sportier bike, has softer-damped suspension, which along with some ‘much-improved-but-still-not-good-enough’ Maxxis tyres makes fast B-roads a bouncy, imprecise and memorable experience. In comparison the 790 Adventure (we changed the stock Avon Trailrider tyres to Bridgestone AX41s) feels like laser-guided round here. Quick flicks of the bars get this tall bike on its side and, although the suspension is a little crude at times, it puts up a good fight when a random mid-corner bump or scarred tarmac appears out of nowhere. The only slight criticism would be that the brakes, although powerful, could do with a little more initial bite on these kind of roads. I’m guessing that off-road riders will ask for the opposite – the brakes aren’t lacking, but you do have to pull them hard on these roads at this speed. 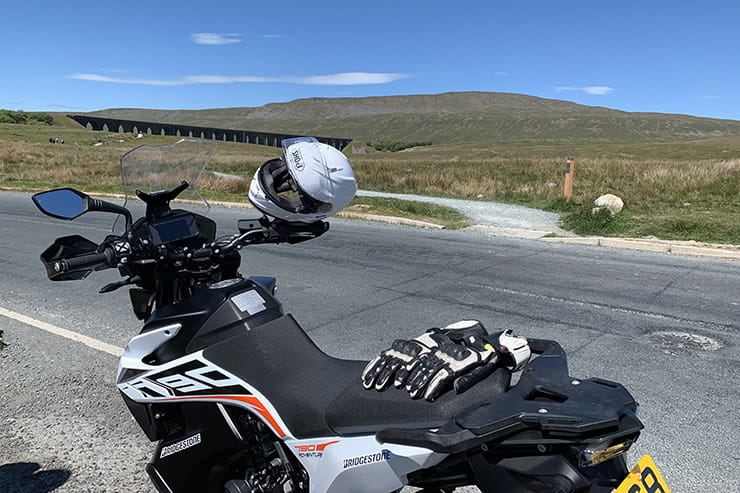 The moment it all comes together.

One of today’s bonus roads is the B6160. It runs from just outside Skipton to Aysgarth, via Grassington and Kettlewell. The first stretch is mid-pace, twisty and always enjoyable, but it’s the stretch from Kettlewell to Aysgarth that I’m here for. It’s a lovely road, but in the last 20 years this already bumpy and narrow road has effectively become narrower as cars get fatter and faster, making overtaking more challenging. The surface has got bumpier too, to the point where I stopped bringing sports bikes up here and even KTM’s 1290 Adventure felt ponderous and porky when I brought it here last summer.

Here comes a bold statement; not only is the 790 Adventure the best bike I’ve ever ridden up this challenging road, but I honestly can’t imagine anything beating it. And this is where the realisation hits – this isn’t an adventure bike or an adventure-sports machine. It’s a new category; sport-s adventure. That is, a sports bike that can genuinely attack bumpy, nasty, pock-marked, pot-holed horrors with the same spirit and ability as a GSX-R attacks its favourite flowing A-roads.

Again, it comes down to the riding position. The 790 Adventure holds its rider so naturally that you find yourself standing up at 70mph on the way into a bumpy corner like it was the most natural thing ever. Don’t know about you, but I try not to stand up on an adventure bike on the road – it rarely feels comfortable and usually just feels silly. But here it just happens because it’s the right ting to do and the KTM responds by finding even more stability, even more poise and has the chassis and suspension to make the most of it. 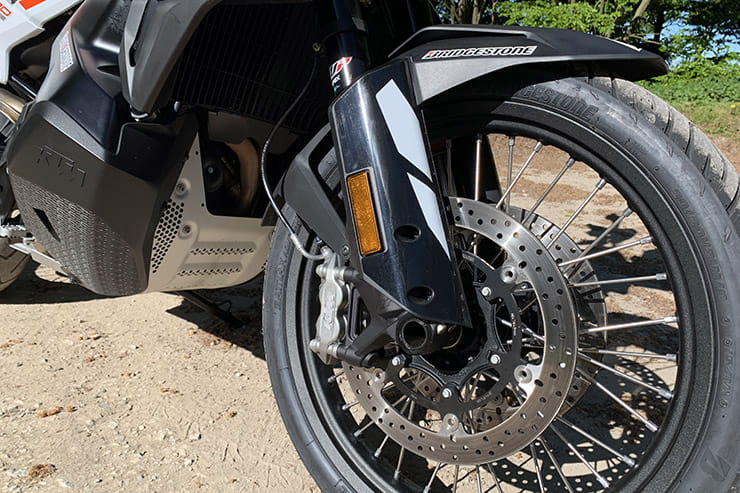 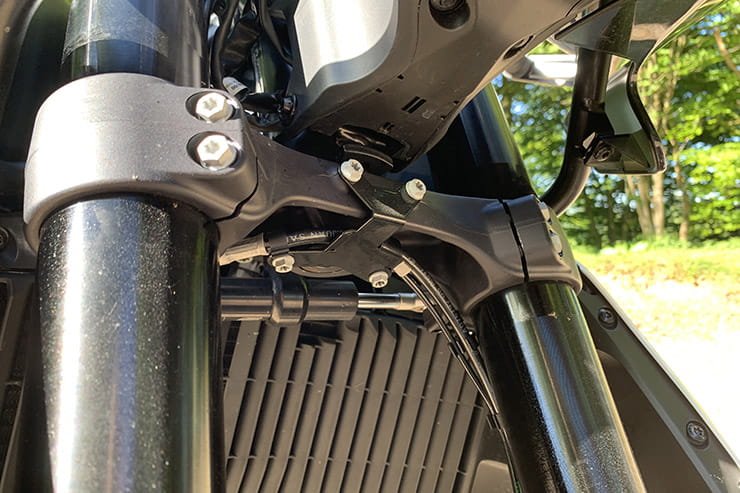 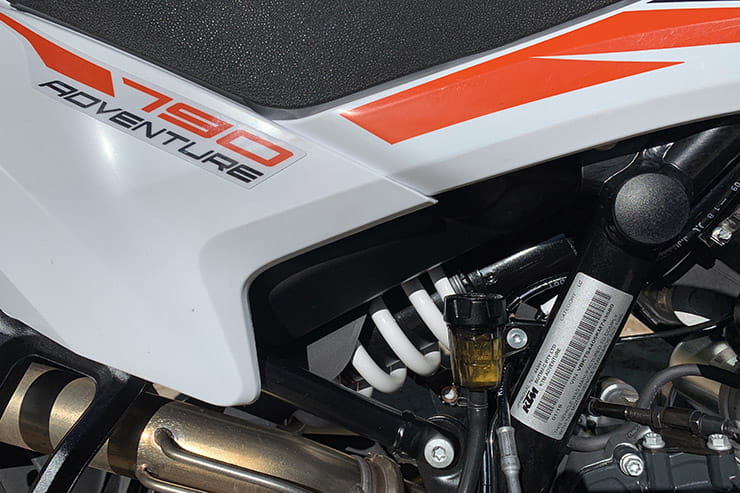 Suspension is well-damped, very capable, but with little adjustment. Steering damper is reassuring

Off the beaten track.

I didn’t take the 790 Adventure off-road. It’s not my thing. But I did want to revisit a tiny, narrow path that I have unfinished business with. The B6270 runs from Nateby to Grinton. On the map it looks like an interesting B-road, in reality it is ten miles of impossibly narrow and twisting gravel-coated sheep-dodging followed by a further ten miles of slightly wider, better surfaced, but equally challenging tarmac. Every time I come here I wish I hadn’t bothered, but today it forms a final challenge for the KTM’s agility.

20 miles later I still hate it, but for the first time I’ve done the full length of it at reasonable pace, without almost crashing. Leaving the engine in third gear and riding it like a giant twist-and-go made the difference. Having an effective quick shifter for when I need to swap cogs without troubling the clutch proved especially useful on a couple of occasions too. 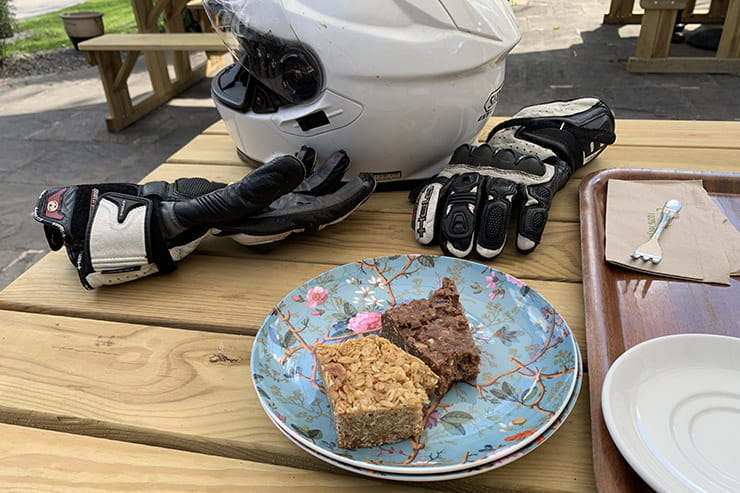 Final fuel stop is ninety three miles from home. Between here and there are forty miles of Lincolnshire’s fastest and finest, plus fifty miles of busy A-roads. I’m too old, too sensible and supposedly too mature and responsible to ride in the manner that I know I’m just about to. It can’t be right that I’m feeling the remorse before I’ve even selected first gear, but I also know that this route brings out the worst in me and there’s no point resisting.

When a bike is this good, this predictable, consistent and this easy-to-ride, then the following 93 miles are only going to go one way. Don’t forget to blink Rosie.

Not too long afterwards I’m home. Frazzled. My eyes are burning from eight hours and nineteen minutes of swapping long distance focus for blind apexes and clock-staring. And my poor ears are whistling from 480 miles of wind noise.

But the rest of me feels fine. No aches, no pains, no questions asked of the 790 Adventure that it didn’t answer with a giant tick. Perhaps the most interesting number is the fuel consumption; 58mpg average. That’s really impressive given the speeds and the manner of the riding. It also gives a tank range of close-on 300 miles from 20 litres. Wow.

Tomorrow Kane is riding it off road. He’ll have his work cut out on a bike weighing almost twice as much as his motorcrosser, with suspension clearly set-up for spirited road riding, not crashing through ruts and still wearing its number plate, indicators, lights and full road gear.

Good luck fella, it’s one hell of a bike. 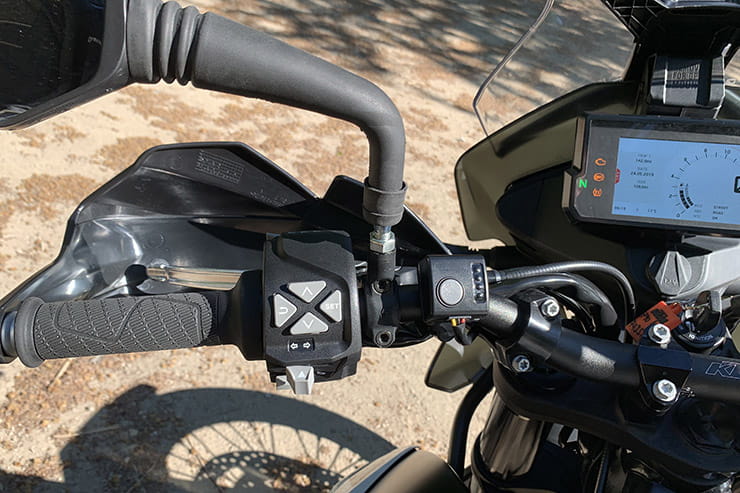 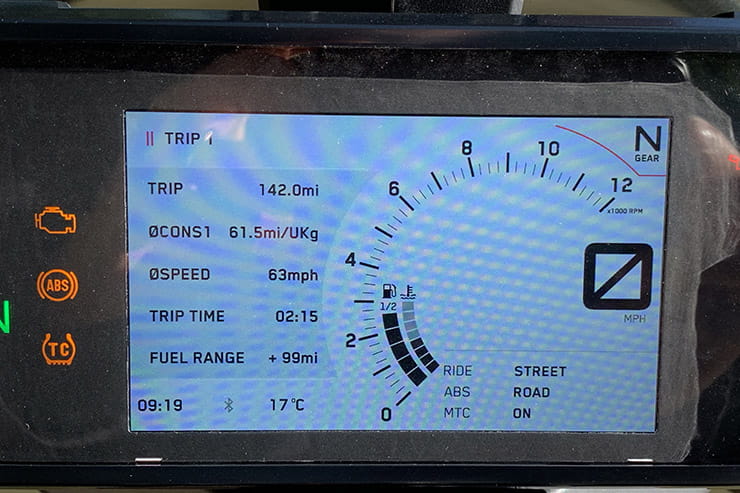 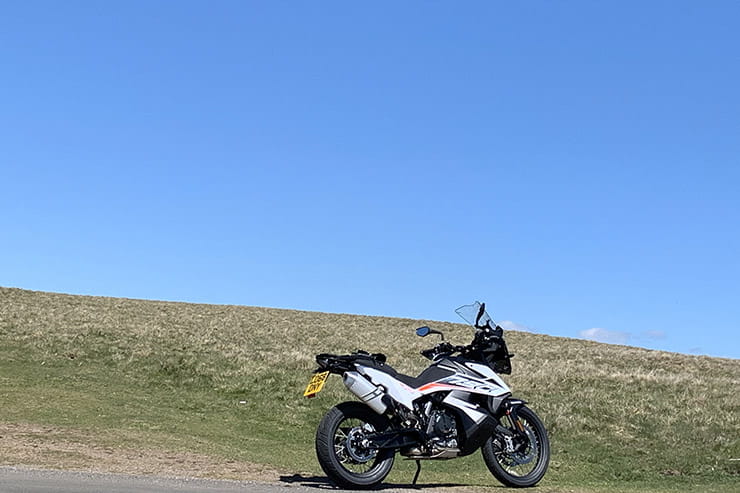