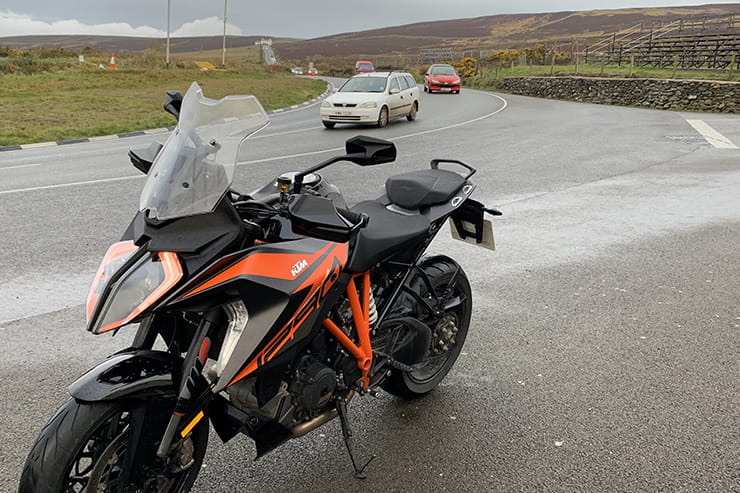 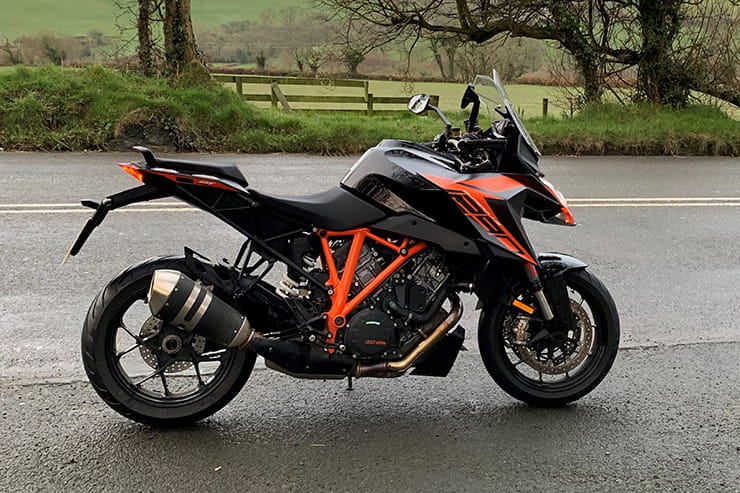 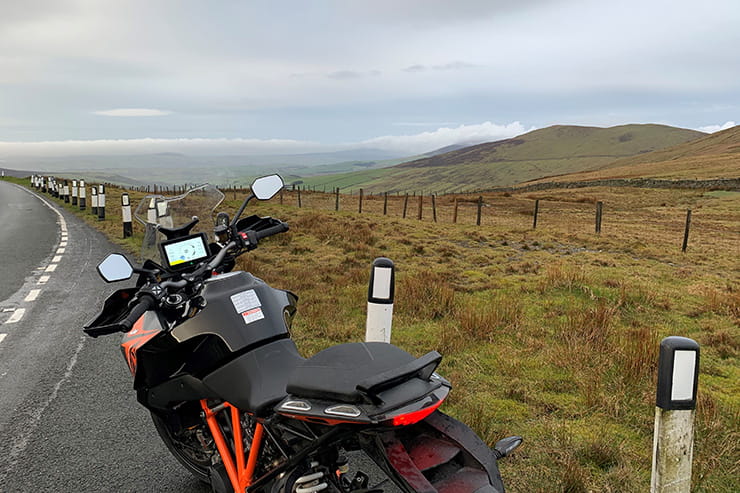 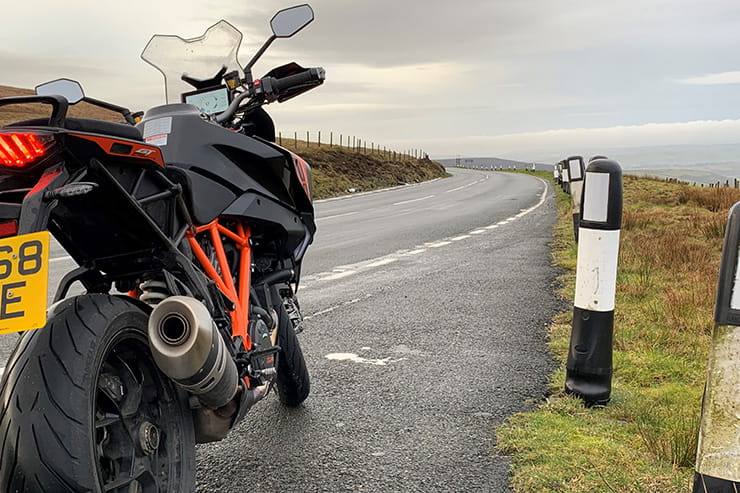 Being an employer on the Isle of Man must be a nightmare. Every morning at 9am your workplace is still a deserted wasteland. By 9.30 a few people start trickling in, wide-eyed, fly-splattered helmets in hand, mumbling excuses about lateness caused by errant dogs, children, wallabies (there are around 160 wild wallabies on the island, descendants of a pair that escaped from a wildlife park in 1965) and needing a touch more rebound damping. By 10am everyone is there, but still discussing the best line through Glen Helen or whether you should do the Gooseneck in second or third gear on a CBR600RR.

When your daily commute includes the world’s greatest racetrack and the ring road goes past the planet’s most famous scoreboard it must be hard not to get distracted.

Part of the schedule when BikeSocial has a bike on long term test is to see how it fares in everyday situations, away from the glamour of a typical road test. And part of that is stuff like commuting. Since moving house last year my daily commute is a bit dull so I decided to challenge BikeSocial’s KTM Super Duke GT to something a little more lively, like the 37.73 mile long-way-round between the car park at my hotel in Douglas and the coffee shop in the same hotel where I was meeting some industry people. I could have taken the lift, but where’s the fun in that? 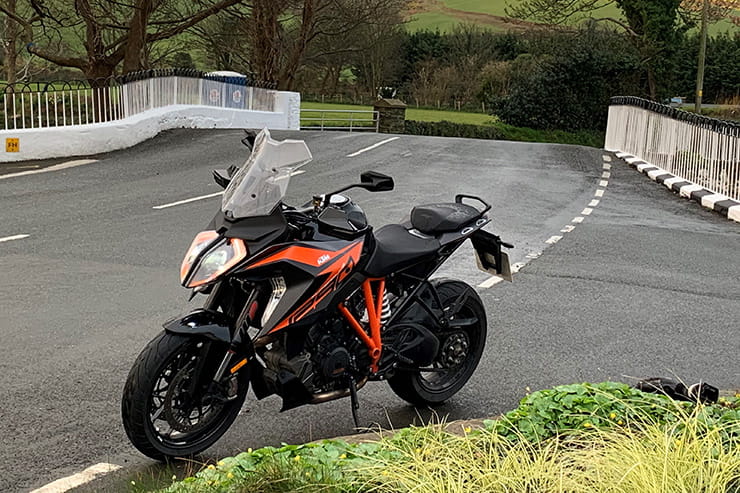 Two miles into the first lap, 6.34am and we’ve already done Bray Hill, Ago’s Leap and Quarterbridge. Three of the planet’s most emotional places to ride a motorcycle and I’m still picking toast from my teeth. Obviously, me and SooperDuc are going slower than our heroes, but somehow, the mundane normality of it all - watching out for side roads, dodging the bumps and reading the slippiness of the still-damp tarmac - makes the location all the more potent.

By Crosby I’m settled-in. The bike’s warmed up, I’m warmed up and the biggest challenge is sticking to the speed limits. There’s almost no traffic in my direction, but the queue of commuters heading into Douglas is forming. The KTM makes this easy, even in the wet with the electronics in loopy mode. There’s plenty of feedback, enough in reserve to manage bumps, manhole (can we still call them that?) covers and multi-coloured farm coatings. As ever at road speeds, it’s the Sooperduc’s flexibility that stands out most. Chugging along at 4000rpm in top in a lazy, civilised manner, like a Honda Transalp designed by Tim Burton. No transmission lash, no wonky fuelling and the clever suspension doing what it needs to, keeping me comfy and confident. I like this bike a lot. 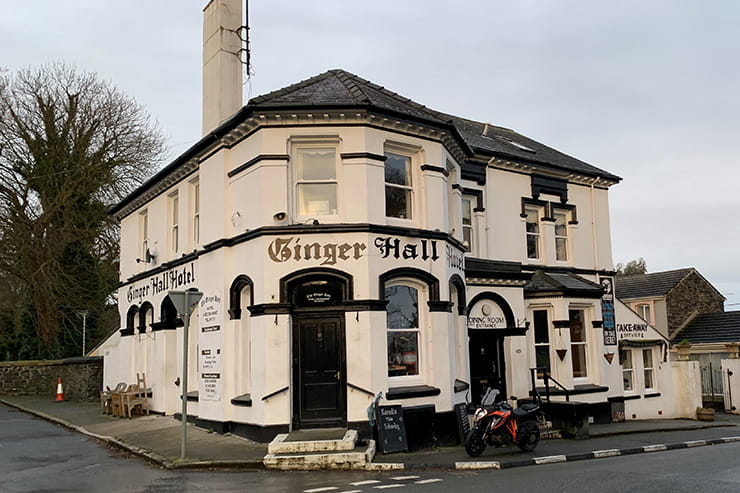 About an hour too early for breakfast, but the plus-point is the empty road

There are occasional unrestricted speed sections on this first part of the course, but somehow it feels rude to go nuts before Ballacraine. So Greeba, Gorse Lea and Appledean are more about rolling through bends than attacking the course.

Laurel Bank is the first of many sections that prompt the ‘Oh, I remember now, this is my favourite bit.’ Until the next one…and the one after that. The whole circuit is special and you have to think of it as a whole to understand it properly. This stretch, from Laurel Bank through Glen Helen and up Cregwillys Hill is where the KTM gets to stretch its legs. I do the whole section in fourth gear, like some crazy 175bhp twist and go, but it could have just as easily done it in third…or top probably, such is the flexibility and quality of fuelling.

None of these corners are difficult, even when wet. But they are a chance to enjoy the bike’s easy steering, ability to change line mid-corner and make the most of the Pirelli Angel GTs’ wet-weather confidence. The temptation to celebrate cresting the hill by running flat-out down Cron-y-voddy is resisted…and then not…and then tempered…and then not, in a pathetic display of non-committal. Instead the local wildlife is treated to a Super Duke GT running through the gears to flat out in fourth and then braking…and accelerating again before lolloping through Handleys on the wrong line, too slowly because the rider can’t remember where the dodgy bit of Barregarrow is. 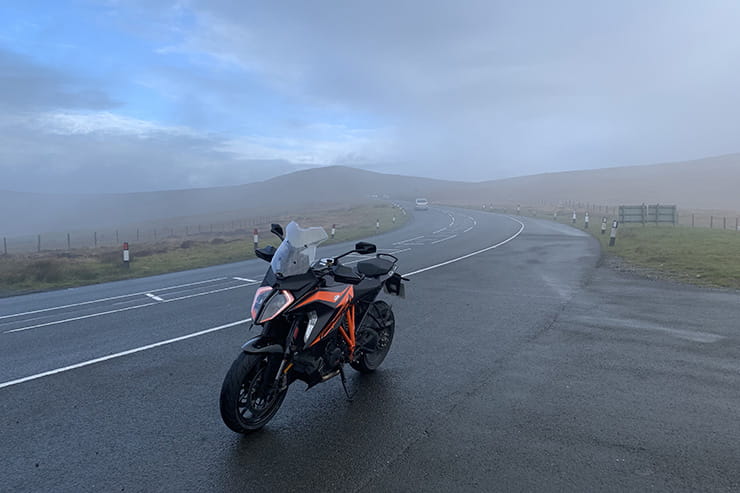 ‘Call that foggy ya’ great mainland Jessie, it’s just a bit of Manxmosphere’

One of the problems I have with modern sports bikes is they demand more of my riding, more of the time than I am able to provide. This big KTM is much more forgiving, allowing me to ride like an over-ambitious half-wit and get away with it. The roles are reversed when it comes to changing gear. I’m much better at it than the bike, although the more miles we do, the fewer missed changes, screaming false neutrals and insults are thrown at the ‘definitely-not-a’ quickshifter. Maybe the gearbox is bedding in or maybe I’m just riding around it, who knows, but it’s less of an issue than it was (stopping using the quickshifter made the biggest difference).

Rhencullen through Ballaugh and Quarry Bends has at least three more favourite sections, ridden quickly enough for the KTM to feel very lively changing direction. The section from Ginger Hall to Ramsey is a lot more bumpy than the rest of the circuit. If its like this at my speed, I can only imagine how terrifying it must be at race pace (which is maybe four or even five times faster than I’m currently going).

Climbing out of Ramsey there’s a lot more traffic. Partly because I’m heading back for Douglas, but also because it’s now 7am and more people are out and about. For now, I’m happy to sit in the queue and take the chances to pick off the traffic one-by-one. 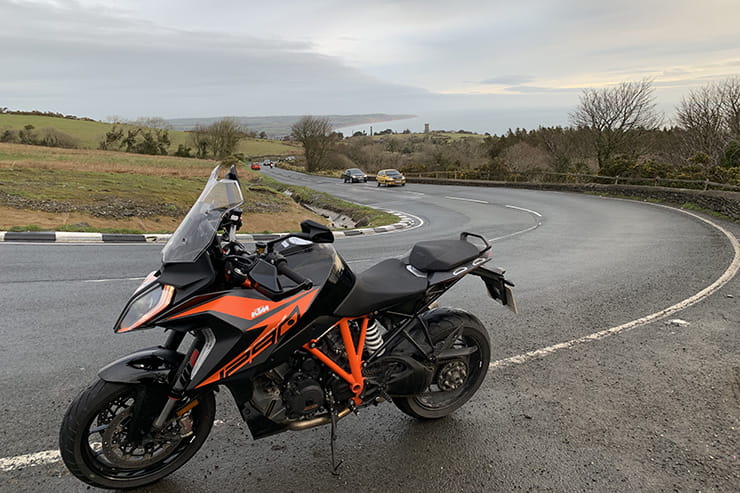 7am, climbing out of Ramsey. Starting to get busy.

In the crazy way of weather that only the IoM ever does, the sun is now out, the Mountain Mile is dry and me and SooperDuc are using as many lines as we can and feeling like heroes. Forget what I said before, this is my favourite section. Oh, and this one too. Approaching the Verandah it looks like fog and then, suddenly, WHAM… like someone pulled the curtains. From blazing sunshine to full-on pea-souper in an instant. Visibility is down to about a car-length. I know this because I just nearly ran up the back of a Peugeot.

Game over. At least through the Bungalow, Brandywell and down to Windy Corner, where the fog starts to lift and the run Keppel down to the Creg is clear, but crowded with dawdling commuters being as careful as you should be on this road in these conditions. I’m dicking about for a website, but they are on their way to work.

Back at the grandstand 38 minutes after leaving – average speed around 61mph. That would have been just about enough to push 1924 Senior TT winner Alec Bennett and his 500cc Norton single back into second place. His bike made about 30bhp, ran crossply tyres made of granite, had brakes that would barely stop a bicycle and almost certainly needed a top-end rebuild by Sulby Crossroads. My 2019 KTM makes six times the horsepower, runs on super-sticky radial tyres and has suspension that Alec couldn’t even dream of. He might not have had to stop at the traffic lights at Ninians, Ballecraine and Ramsey, or the temporary road works at Greeba. He didn’t have to stop and take photos either. But he did probably stop for a fag, a pie and a kickabout with some Germans at some point. Plus, with life expectancy being so low in those days he probably died a couple times during the four-hour race too.

We’ll call it a draw then shall we? 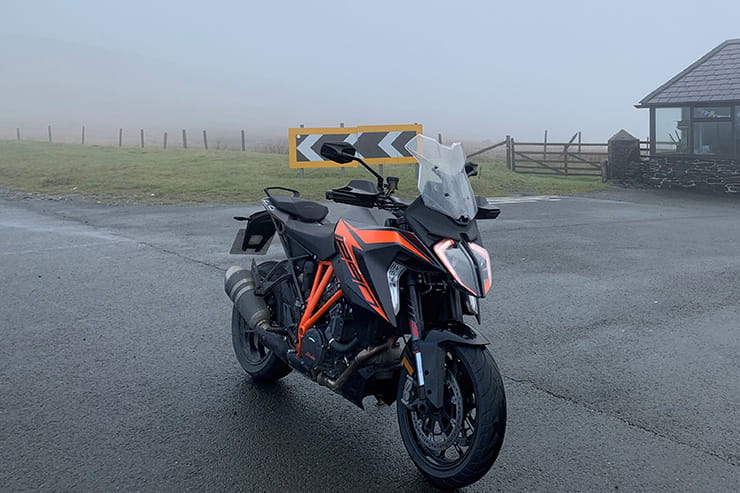 So, what did we learn? KTM’s 1290 Super Duke GT can take a sleepy, hungover rider and guide them easily through everything the world’s most exciting commute can throw at them. The powerful-but-flexible engine makes dealing with troublesome traffic easy and the second-storey riding position gives you the view to plan well ahead. Clever reactive suspension helps to soak up the pot-holes and stay controlled in corners should your commute include a section of 180mph mountain roads with no speed restrictions. And it has the brakes and electronic safety aids to keep you orange-side-up should you meet someone still painting their nails or finishing their breakfast on the go.

At £16,799 it’s more expensive than catching the bus, and even on a PCP deal you’ll be need a £4k deposit and £259 per month. But commuting is just part of the deal. Will your Southern Rail season ticket help you embarrass Fireblades on a track day or take you and a pillion through Europe this summer? Having a bike that commutes this well means you don’t have to spend extra money on commuting and therefore it actually saves you money. Which clearly, makes buying one even more of a no-brainer than before.

Seriously, what’s stopping you... apart from the styling, the gearbox, the precarious sidestand and the stupid electronic steering lock that only disengages when it decides you have been humiliated enough? 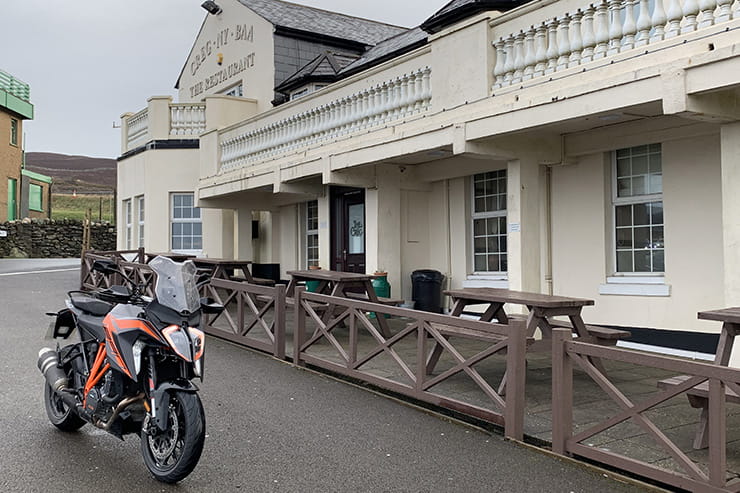 Three things we love about the KTM 1290 Super Duke GT

Three things that could be better