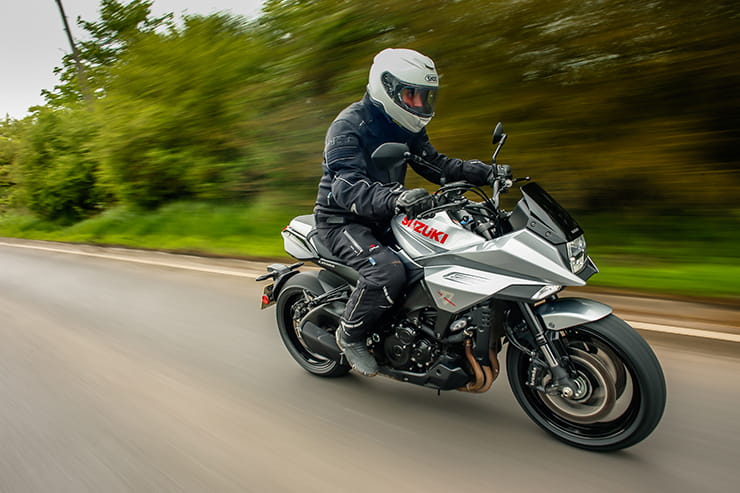 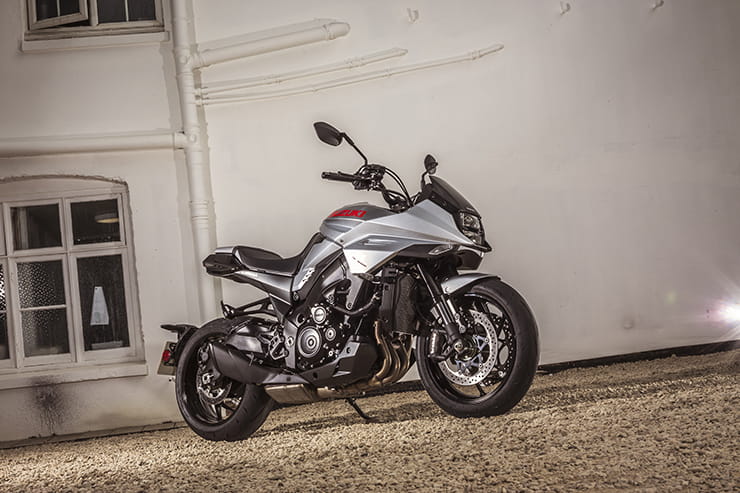 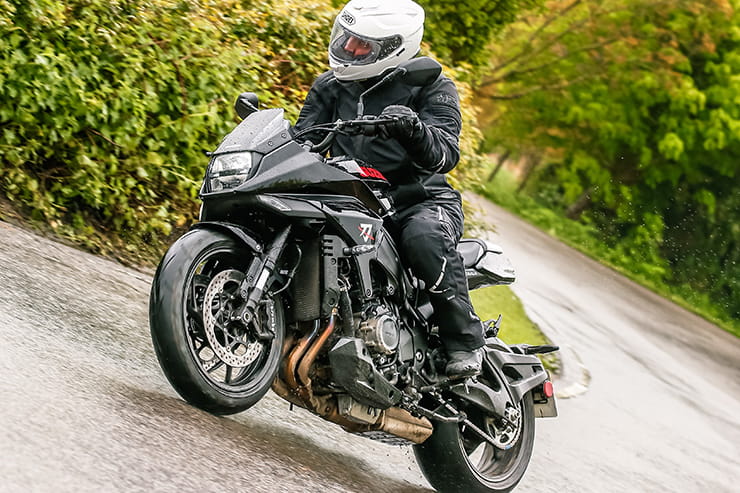 If Suzuki’s talented-but-bland-looking GSX1000S got invited to an 80s-themed fancy-dress party, this is what it would end up going as. The 2019 Katana is essentially a GSX1000 with a different bodykit, uprated brakes, posh clocks, one-piece handlebars and a £1000 price increase.

Underneath the plastics is the same huge alloy chassis, same enormous swing-arm and suspension, all either borrowed or closely resembling those fitted to 2005’s GSX-R1000.

Likewise, the engine is essentially a 2005 GSX-R unit, retuned with different cam-profiles for more midrange and a little less top-end power and cleaner burning to meet the latest emissions regs.

The Katana keeps the good bits of the GSX (engine, flexibility, slick gearchange, comfort), fixes a few of the niggles (bland styling, sharp throttle response) and introduces some new challenges (suspension settings are harsh and upset the handling in certain circumstances). 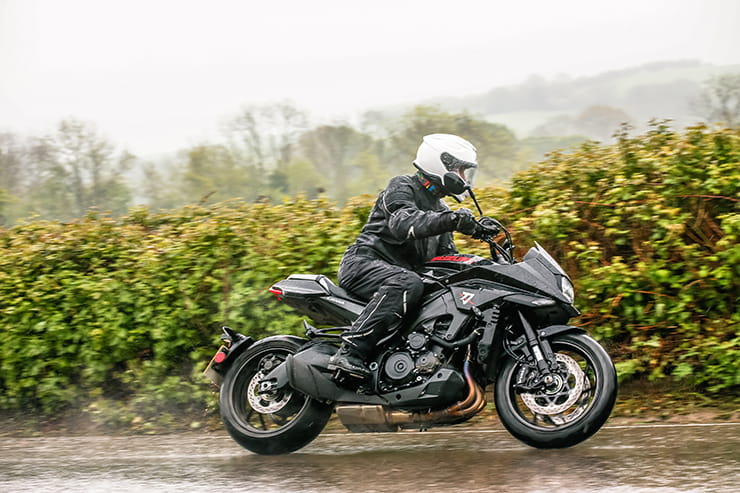 At £11,399 the Katana costs £1000 more than a standard GSX1000S. There’s no extra performance, no uprated suspension, just a styling kit, one-piece handlebars and different brake calipers. Suzuki were at pains to point out that the Katana is a higher-quality product, but, bearing in mind that the engine, suspension, chassis and all fasteners are the same, its hard to see where that extra quality is unless the quality of the plastic is somehow better than the GSX (it doesn’t appear to be, but I’m a biochemist, not a plasticologist).

Suzuki are keen to point out that the intention was never to simply recreate the old Katana – they already did that for the Japanese market back in the 1990s. This bike is a re-interpretation of the original design in a modern style, a bit like Honda’s CB1000R or BMW’s R-Nine-T. Price wise the Katana sits in a similar place to both the Honda and BMW, but more expensive than Kawasaki’s Z900RS. 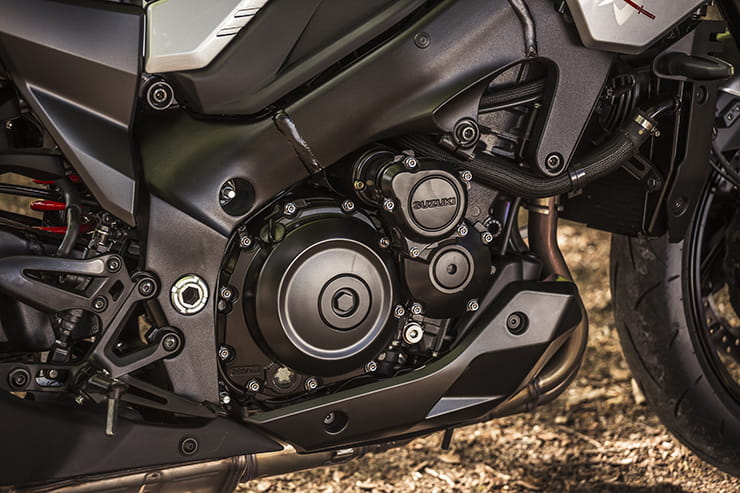 Started life in a GSX-R1000 race replica, just as effective in an upright roadster

Motorcycling is a funny place. Many riders will tell you that Suzuki’s 2005 GSX-R1000K5 model was some kind of high point in sports bike technology. That brawny, torquey, long-stroke engine was brilliant on the road and dominant on the track. Suzuki’s fuel-injection has always been good, likewise their gearboxes, handling and the factory has usually managed a choice of suspension settings that manage roadholding and ride quality in equal measures.

So, when Suzuki announced that the ‘reborn-for-2019 Katana’ was going to be based on the current GSX-1000S, we should have been drooling. The GSX is a street bike based largely on the 2005 GSX-R, with most of the performance and most of the handling, but built into a more upright, rider-friendly package.

The problem is that things have moved on a long way since 2005. These days you can buy adventure bikes making 170bhp. Fuel-injection and ignition technology has come on a long way too, giving us engines that deliver stunning midrange, massive top end power and soft-as-pussycat commuting too. The original GSX1000 was criticised for having slightly-too-sharp throttle response.  Instead of uprating the ignition and fuelling, Suzuki re-profiled the plastic cam in the twistgrip.

The Katana’s 14 year-old engine still feels strong and the gearbox is a lesson in slick-shifting genius to any and every other manufacturer out there. In some kind of bizarre tribute to the original 1980s katana, the Katana has a heavy clutch action that I don’t remember from the GSX and makes town riding more taxing than it should be.

Peak power is a claimed 150bhp with 80lb-ft of torque. The upright riding position and minimal fairing make it feel more-than fast enough while having just enough of a screen and bodywork to make 80mph cruising comfortable for longer than most naked bikes. Next to Honda's CB1000R, Kawasaki's Z900 and BMW's R-nine-T, the Katana feels quick and exciting. But compared to brutal acceleration of something like Yamaha's MT-10 (which Suzuki don't see as a competitor, but you might because it only costs £400 more), the Katana's engine is showing its age.

I’ll hold up my hand to not being the most technically-minded motorcyclist. Which is why I appreciate Suzuki’s simple-to-use electronics. There’s a choice of just three riding modes, controlling three throttle maps and traction control settings. 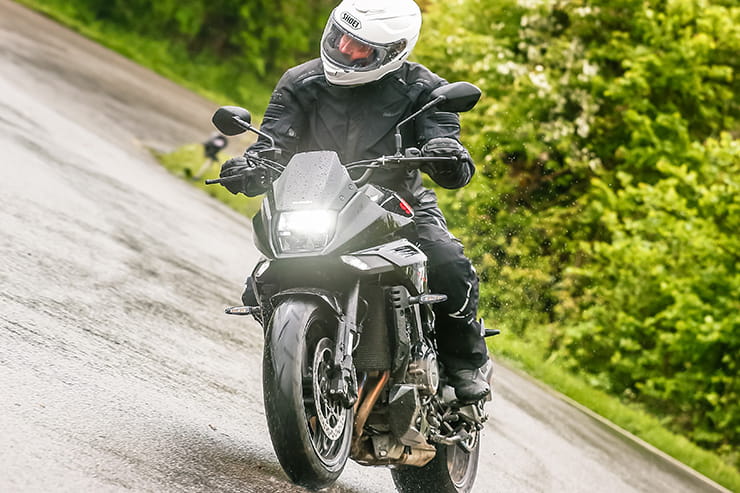 In the wet (as in ‘rivers running across steeply cambered Cotswold B-roads’ sort of wet), anything that gives a little more grip is welcome. Normally I don’t bother changing settings. I’m happy with my throttle control, honed over 35 years and the wet settings on most bikes simply numb the response and require a bigger twist for the same amount of go, which seems counter-intuitive to me.

But we’re here to test the bike, so wet-mode it is. And on the Katana, it’s good. There’s not a lot of difference at small throttle openings, but as you try and go faster you notice the lag in the lower gears. Once I’ve re-accustomed myself with the GSX’s slightly less severe throttle action, I put it back in dry mode and enjoy the sharper response. 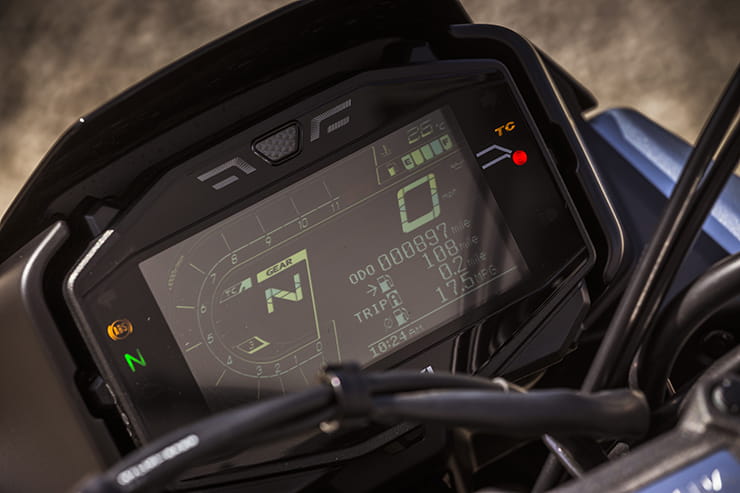 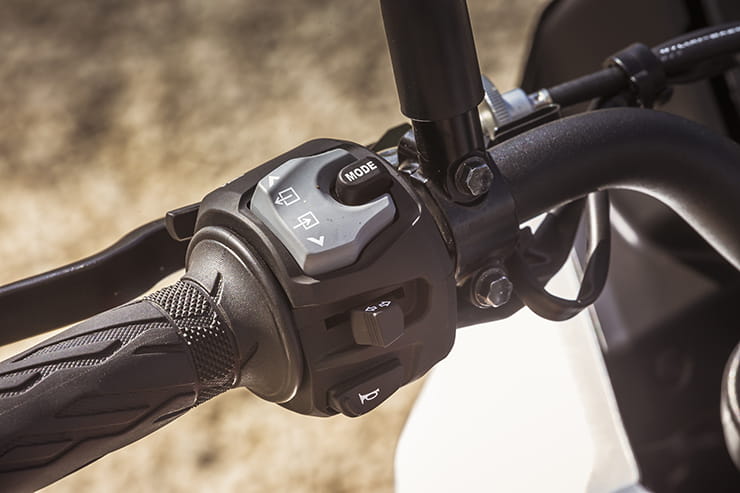 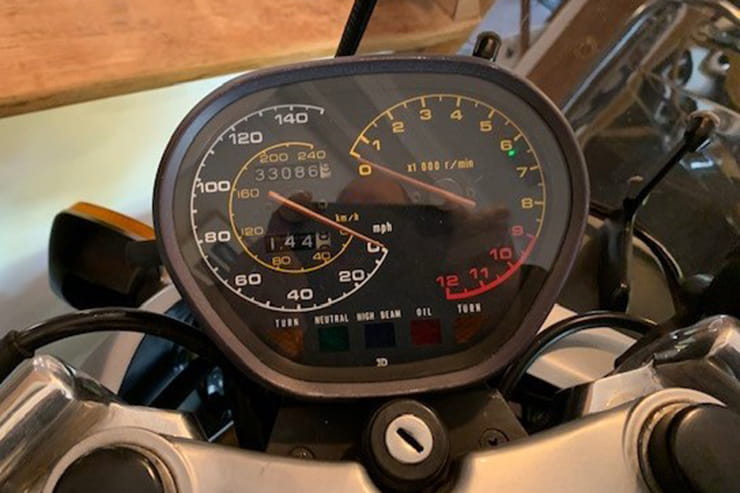 LCD display is pretty, but cluttered and a bit ‘budget’ for a bike costing £11,399

The riding position is different to the GSX. The seat is further forward and slightly taller too. The GSX’s clip-on (above the yoke and mostly comfortable) handlebars are replaced with a one-piece unit and the rider sits higher and further forward, with more weight over the front and a little more leverage to help steer a bit quicker. I found it very comfortable and didn’t suffer the tingly fingers that you often get on a wet ride on a four-cylinder bike. The new clocks pay some kind of homage to the original Katana in the way the LCD tacho sweeps round the housing, but it would have been good to see a TFT display to justify the premium price. Essential info like speed, gear position and riding mode are easy to read, but the fuel gauge and clock are very small and the panel in the bottom right corner containing the trip and consumption info is very cluttered and hard to sneak a quick glance at. That’s a little more important on the Katana than the GSX because you only have 12 litres of fuel. Suzuki claim an average of 53mpg, and a tank range of 138  miles. Our test ride returned about 44mpg, which means somewhere around 120 miles to empty, which means you’ll start looking for a station around 90 miles in. Ridden more carefully, sticking to speed limits and back roads could nudge that up to 52mpg and around 140 miles range. 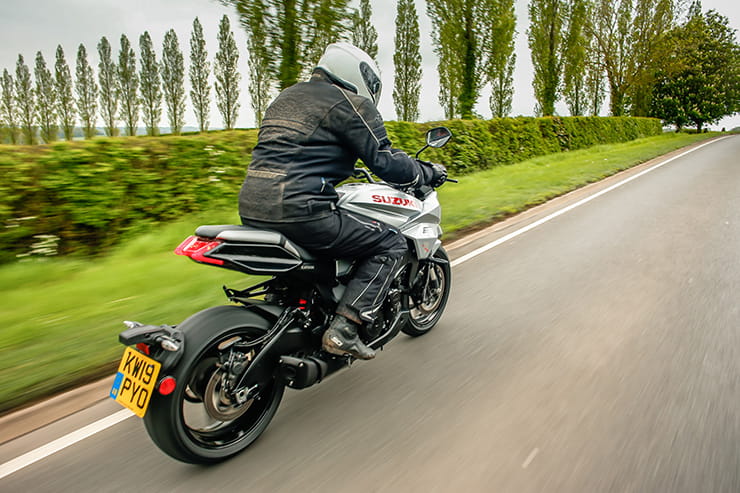 Suspension is harsh on bumpy roads. Note how filthy the rider’s back gets in the wet because of the low-set number plate hanger and lack of mudguard

Last time I rode a GSX1000F (the faired version) I was surprised by the Jeckyll and Hyde handling. In the dry it was superb; sporty, confident, predictable, easy, but in the wet it steered like the front tye was a 20 year-old squared-off crossply.

The Katana comes on different tyres and steers much better in the wet. But there are other issues, at least on standard settings. The suspension has been stiffened at the front and softened at the rear to compensate for the extra weight over the front from the revised riding position.

On the wet press launch I thought it needed more fiddling. The ride quality was very crude; harsh over small bumps, lacking control over bigger ones and missing the consistency to give me confidence. There's a reasonable amount of adjustment at both ends and I was looking forward to experimenting to bring the bike under control because, it's a GSX1000 underneath and I knew they handled well. Having since had a test bike for three weeks I found the settings in the dry (faster riding, more aggressive) to be still firm, but nothing like as intrusive as on the launch. I did fiddle - reducing compression damping at the front and rear - but ended up not too far from the standard settings.

Brake calipers are radially-mounted Brembo items, similar to those on the current GSX-R1000R. There’s a lovely blend of feel in the wet, power when you need it and a fool-proof feel that makes the ABS almost redundant. 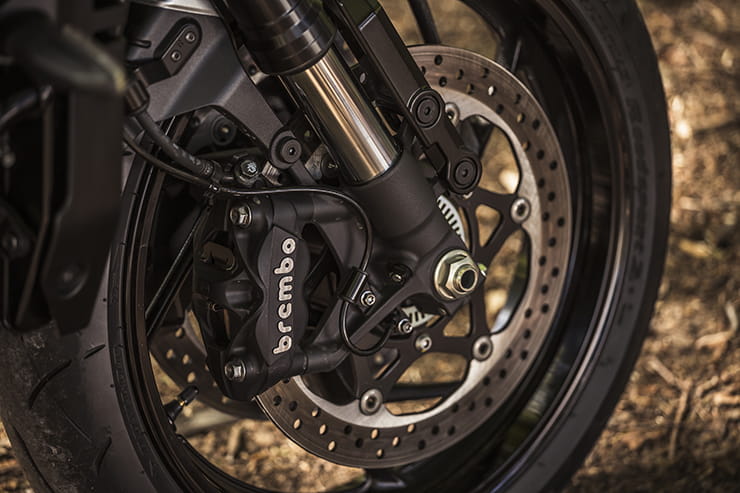 Forks are set too stiff as standard, brakes are superb though

When Suzuki released pictures of the new Katana last year there was a lot of chatter on social media about the styling. Some was disappointment that it wasn’t a copy of the old one, some was just critical of the new looks, much of it directed at the number plate hanger. Having spent a day riding it, walking around it and stealing backward glances from every angle, I have to say that the looks have grown on me, although the reality of that number plate hanger is that all the crap off the road goes up your back leaving your jacket looking like you’ve just done an enduro. I get it that Suzuki wanted to build a 2019 interpretation rather than a reproduction and, in black particularly, the new styling really works well for me.

The riding experience was disappointing given that the bike its based on is so good. The engine is still a great motor, even if it is starting to (and I know how daft this sounds for a 148bhp, ex-GSX-R motor) feel a bit sluggish and woolly next to the current crop. Sadly, the revised suspension settings were so off the mark that all I remember of the ride was not feeling confident enough to ride as I wanted to. I’m 99 per cent certain the problems can be adjusted out, but on standard settings, there’s a mismatch between suspension and engine performance that doesn’t work for me.

With the Katana costing £1000 more than a GSX1000S it feels like Suzuki have forgotten to give us anything extra. The styling is lovely, but it’s just plastic arranged in a slightly different order. Upgrading the suspension and fitting a TFT dash would have given the bike a premium feel that justifies the additional outlay. Without it, you’re paying more of your money for a great-looking bike that handles worse (on standard settings) than the cheaper version. 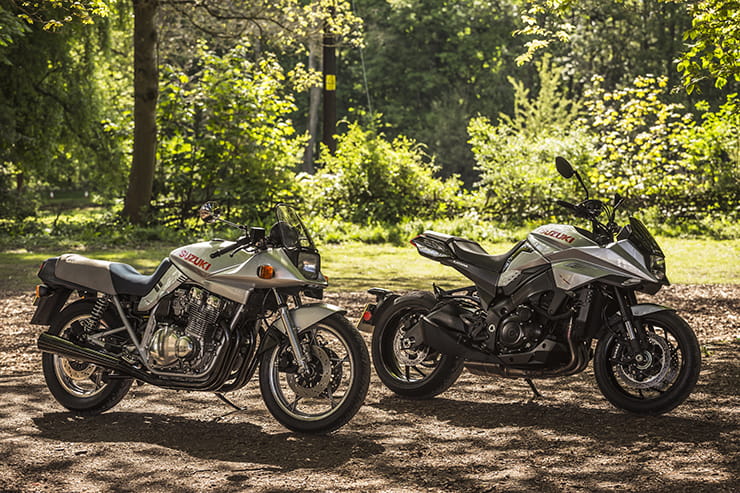 39 years’ development brings 50 per cent more power, 20 per cent less weight and almost as much controversy about the styling. See you in 2048 for Katana 3.0?

Three things we liked about the 2019 Suzuki Katana