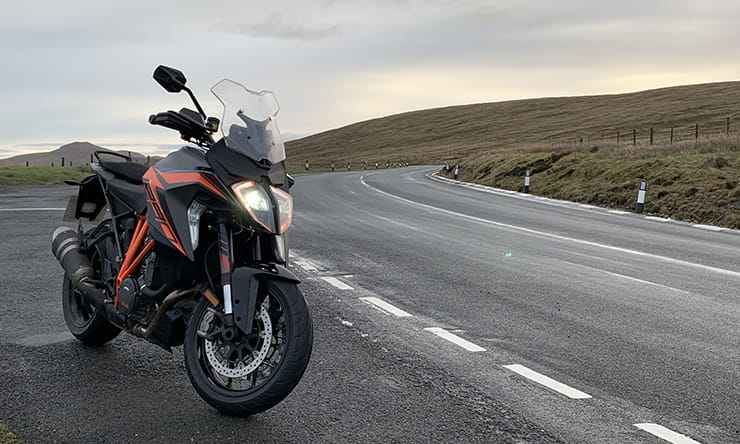 BikeSocial were lucky enough this summer to run a KTM 1290 Super Duke GT for six months and 4000 miles. Here’s what we learned.

You can’t argue with the numbers. 175bhp and 106lb-ft of torque delivered at just 6750rpm means you’ll be meeting a lot more horizons a lot more quickly than on other bikes. Thing is though, even in the loopiest of loopy engine modes it doesn’t feel that quick. Maybe it’s because the revs run out so (relatively) quickly compared to a high-revving (and fast-revving) four-cylinder motor. Maybe its because none of us actually know what ‘power’ feels like because what we feel and describe as power is actually something called ‘thrust’ and that’s dependent on torque and gear ratios. Maybe it’s because all those clever electronics do one hell of a job of making the bike go forwards without fuss.

Whatever the explanation, KTM’s Super Duke GT is an immensely usable, very fast motorcycle and that’s a good thing.

2. The electronics are very good

That’s good as in ‘you know they are there and you trust that they’ll do the job’ while being totally unobtrusive. Multi-stage traction control, cornering ABS, hill start control and cruise control all work hard to make your life easier without distracting from the riding pleasure at all. 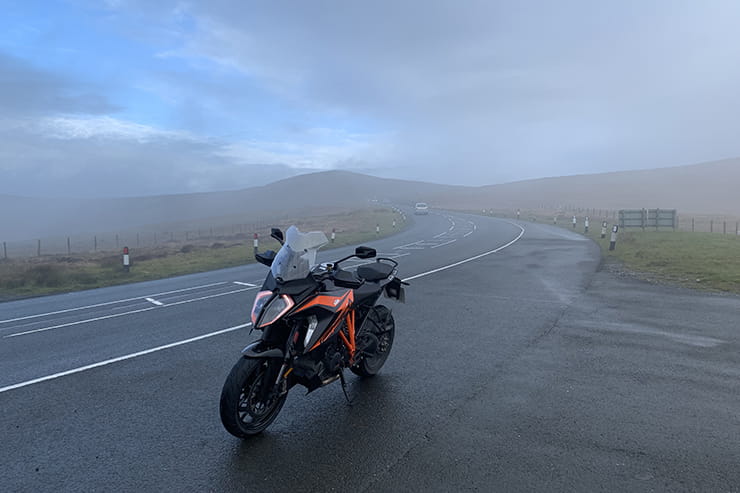 Electronics are superb, although we couldn’t find a ‘fog’ setting

All the above, plus the heated grips, Bluetooth integration and suspension settings are managed and accessed via a simple user interface on the left hand handlebar and TFT screen. Just a handful of buttons and a system so simple that techno-dunces like me can operate them in the dark.

Plus, there’s a ‘rightness’ to the GT’s ergonomics that isn’t apparent when you first get on it, but becomes very clear when you’re 380 miles from home at 3pm, it’s raining and you want to be stood at the bar (and be able to stand up straight) for last orders. The screen is effective, the handlebar:footrest position is perfect for covering distance at speed and the seat is firm, but very supportive. Oh, and it does an easy 200 miles to a tankful, getting on for 250 if you are cruising at motorway speeds. 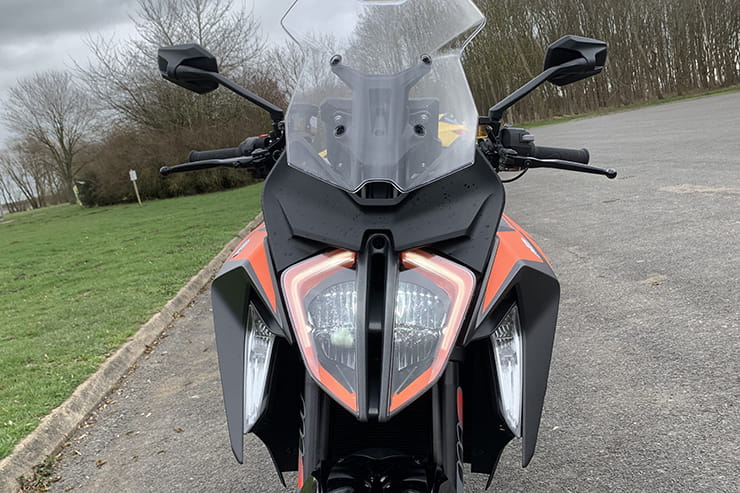 From the handlebars back the KTM looks tough and purposeful. Forwards of that, we’re still not convinced

4. Electronic semi-active suspension is getting to the point of being worth having

Ten years ago electronic suspension was terrible. Three settings, none of them worked properly and when it went wrong the bill was horrendous. In 2019 it’s much, much better. KTM’s semi-active WP system monitors movement and adjusts the damping accordingly. It doesn’t alter spring rate like BMW’s latest system and it still feels a little remote occasionally because you never quite know how much damping it has decided you are getting.

At first this bothers you and then you forget about it and concentrate on just riding the bike and looking where you’re going. At that point you stop noticing until you ride a bike with typical, standard suspension fitted, which feels harsh and crudely damped.

And that’s the point. We rarely notice when suspension is good – we just enjoy the ride and assume it’s our talent making the difference. But when suspension is bad (or at least ‘less good’) we notice it. KTM’s system is very good and, for an all-round road bike it works.

5. The build quality is superb

The big bits – frame, engine, suspension, bodywork, clocks – are the equal or better than any other manufacturer. KTM still has some work to do on some of its bikes finishing touches, but on the whole the Super Duke GT lives up to its £17k price tag. 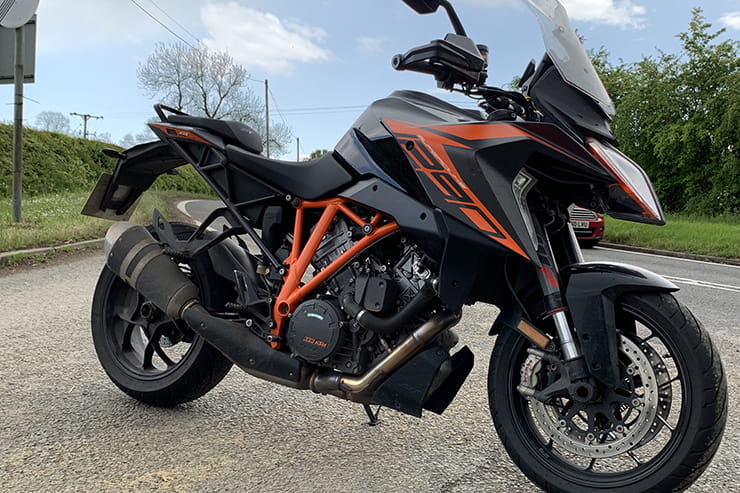 Every time we rode it we loved it, but £17k is a lot of money

6. We still can’t work out if it costs too much or is a bargain for the performance

Every time you ride the Super Duke GT you respect what KTM have achieved. There aren’t many bikes out there at any price that are as capable, comfortable and able to thrill in the summer, but also bring confidence and keep you safe when the weather turns horrific.

However, when you pay this much money for a chain-driven sporty tourer, you should expect it to come with luggage and a centrestand (especially because lubing the chain without one is such a faff).  And also, you shouldn’t expect the company who made it to suddenly dump a load of last year’s (almost-identical) bikes onto the market at a massive discount halfway through the year, destroying the residual value on your PCP plan (never mind the poor souls who paid full price for last year’s bike) overnight. If KTM really wants to attract and keep the same customers as Ducati and BMW, it has to get its pricing and stock control sorted because the annual price drop happens all-too-often on too many models. If you bought the discounted bike, congratulations, it’s a hell-of-a-machine for the less-than £13k you paid for it. If you paid full whack for the 2019 version, here’s hoping the dealer looks after you when the finance ends.