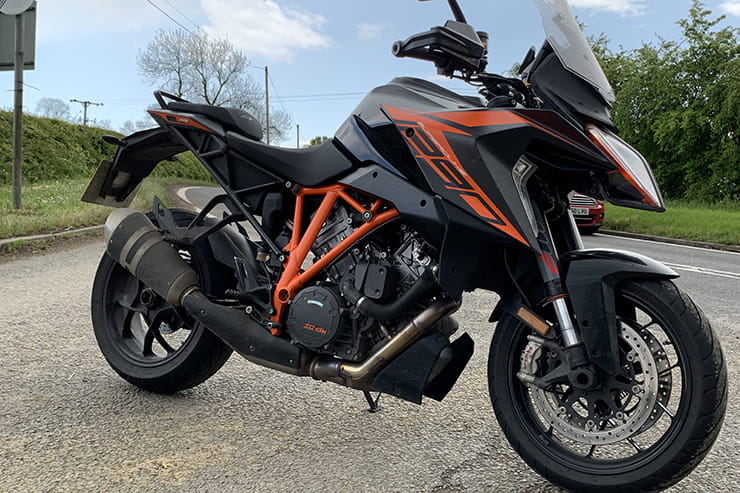 Ok, time for a sweeping statement. After three months, 2500 miles, some highs, some lows and a few weeks riding many other bikes and not the Super Duke GT, I jumped on the KTM for a 120 mile blast and remembered that this bike could be that ‘why doesn’t someone build a bike that genuinely does everything…brilliantly’ machine that we’ve all been waiting for.

As happens so often it’s the seemingly mundane rides that turn out to be the most memorable. In my case it’s because I’m always late setting off.  I talk too much and like to listen. Which means even though I’ve been in this particular meeting for two hours already and even though I know I have to leave at 1.45 to be back in the office, 65 miles away for a 3pm conference call, it’s 2.01 and I’m only just putting my ear plugs in. 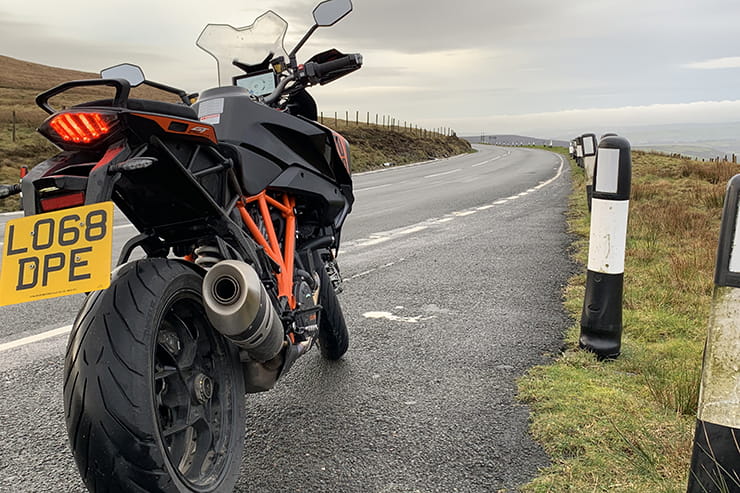 If this were a just a Mediocre-Duke I’d never have made it. But it’s a Super Duke…baby, and so, fifty-nine minutes later I pull into the BikeSocial car park, run up the stairs and sit in the meeting wide-eyed, buzzing and feeling remorseful and adrenalised when I should be dissecting spreadsheets.

KTM’s Super Duke GT makes this kind of malarkey simple because it genuinely does have the power and speed of a sports bike, the comfort, visibility and ride quality of an adventure bike and the attitude and aggression of a super-naked. Oh, and it averages high-40s mpg too. It’s rare for a bike to live up to the claims manufacturers make, but this one does them all, with knobs on.

The manner in which it just covered some very challenging roads and traffic without feeling out of control or anywhere near its limits of acceleration, handling, braking or traction makes even half-baked riders like me feel invincible. Is that a good thing? Yes. Rather that than vulnerable. 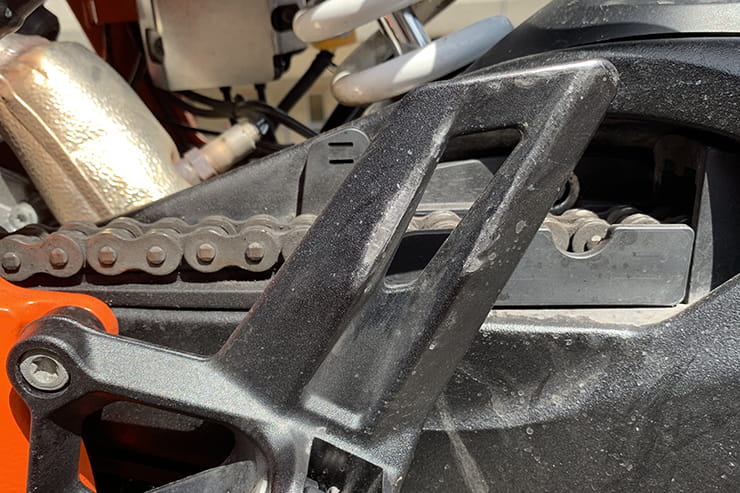 Build quality on the big lumps is brilliant, not so good on the peripherals

BikeSocial’s lightly-obsessive punctuation professor had been riding it last and so, not only was it immaculately clean (including a freshly adjusted and oiled chain), but the switchgear and menu functions have been set-up so things like the heated grips are now just one click away. Plus, the Russian-roulette ‘not-quite-quick-enough’ shifter has been turned off. Now we’ve got past the ‘clumsy-first-dates’ stage, the electronics have been set as I like them and left alone. Typically I have it in sport mode for everything because I prefer the sharper throttle response and the semi-active suspension works well on pretty much every road in this mode.

It took a couple of miles to re-acquaint with the KTM’s clutch action, gearchange and steering, but after that it just felt great to be back on board. When the ride is as good as this it doesn’t matter how ugly the styling is, how over-long the sidestand is or how unpredictable the electronic steering lock is (and in truth it’s been much better recently). Right now, this is a bike I would happily get on to do any journey to anywhere knowing that I’d get there as quickly as anything else in much more comfort than most. Even riding slowly is easy – and that’s probably even more of an achievement for a 175bhp V-twin as any of the above. A few weeks back I went for a day out with a mate that hasn’t ridden for a while. They were cautious and careful in what turned out to be a round trip of 140 miles of which around 100 miles was filtering past queuing traffic. The Super Duke trundles as well as it annihilates, purring along at 45mph, gliding through mile after mile of traffic jams. 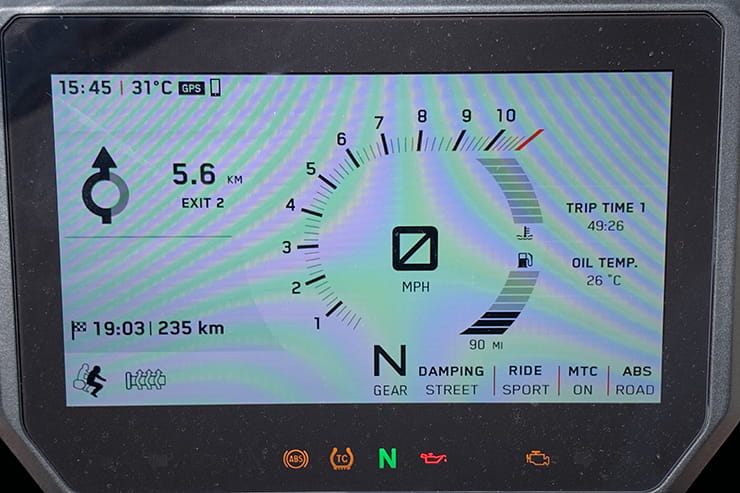 And I finally worked out how to make my phone connect to the bike (my fault, not the KTM as it turned out) so I can now use the KTM My Ride Navigation app. Although since getting it to work I haven’t been anywhere that I don’t already know how to get to. Some in the office are outraged that KTM charge for the app – no other manufacturers do apparently. I get that, but it’s £7.99, which is a lot cheaper than any sat-nav I’ve come across and it works well. If you’ve already spent the best part of £17k on a Super Duke GT, I’m guessing £7.99 is affordable.

The price is important because KTM has a history of inconsistency for pricing. All the 2019 Super Duke GTs they brought into the UK are sold, apparently, but there are plenty of unsold 2018 models still in dealers, on sale right now for around £12,500. There’s not that much difference between the 2018 and 2019 models especially since the suspension upgrade on the later model is now available for free for owners of the 2018 bike. If KTM get the numbers wrong for 2020 and don’t sell out of Super Duke GTs, the same thing will happen which will have a huge impact on the value of 2019 bikes. Most other manufacturers have got this sorted in the last few years (because PCP business depends on it), KTM have to get a grip quickly or they’ll lose long-term customers. 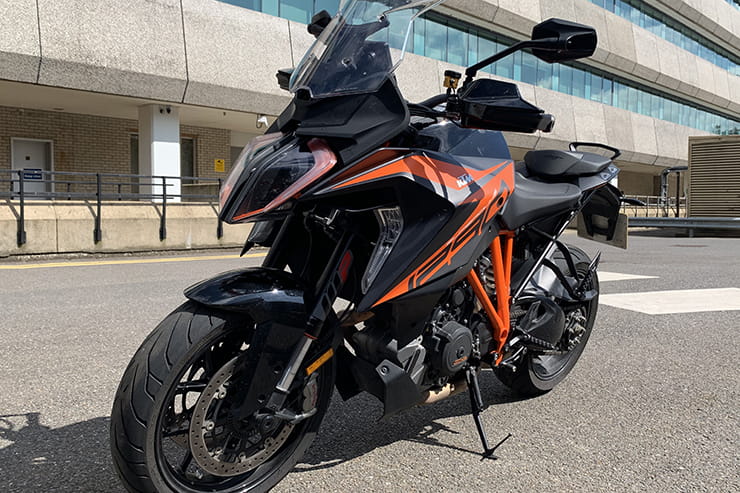 It doesn’t get any prettier

Of course I can’t predict what potential KTM customers want, but my hunch is that if you’re either a sports bike rider wanting something less focussed, but still sporty or an adventure bike rider wanting something more sporty, but still practical and both of you are looking to do some two-up riding, then this bike should be on your list of machines to get a test ride.

If I were either of the above, but only looking to ride solo then I’d wait for the almost-inevitable Super Duke 790 GT because KTM’s middleweight motor has all the punch and pizazz you could ever want and in a slightly shorter, considerably lighter and much less expensive package, it’ll be an even better proposition. 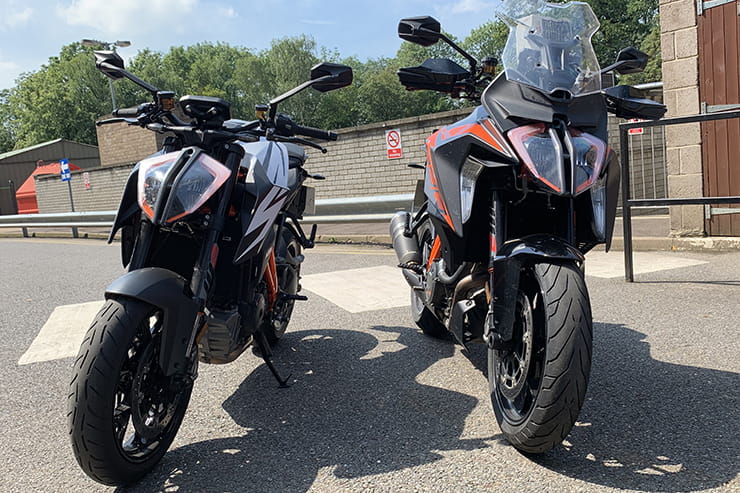 ‘It’s always the quiet ones.’ As an introverted former biochemist I was fascinated to read a paper describing how dopamine - one of the many ‘pleasure hormones’ produced by humans is more prevalent in extroverts and maybe the reason us ‘quiet ones’ turn out to be thrill seekers as we chase a dopamine high. I’m thinking a lot about brain chemistry right now, attacking the grizzled, gnarly tarmac of a bumpy back road in Peterborough’s Fens. KTM’ Super Duke R is driving hard to the horizon as it does, but the horizon is obscured by a large, prickly hedge while the road turns back on itself to the right.

I brake too late...again, because I’m going faster than expected...again. In three seconds time I could be toast, this is serious, maybe mother was right etc. So why am I grinning like an eejut, completely calm in an almost trance-like state, waiting for the moment to flick 195kg of Austrian addiction on its side? The answer is endorphin, another brain chemical released when humans get extra-happy. Endorphin brings on a trance-like state. Hello trance. 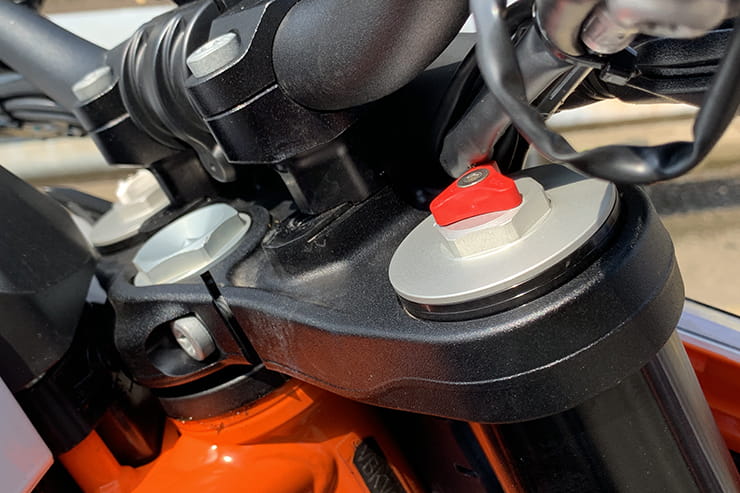 Twenty four years ago I road tested KTM Duke 640. At the time it was KTMs only road bike, a single cylinder nutcase of a motorcycle that only made sense when you rode it like a race bike. Round the local back roads it was astonishing and as someone who got paid to describe a motorcycle I was embarrassingly lost for words on how to explain the experience adequately.

This afternoon, riding KTM’s 1290 Super Duke R and I’m having a similar problem to describe what this bike does. It makes three times the horsepower of that 640 single and weighs just half a pillion more despite having an extra cylinder, considerably more chassis and all the additional gubbins required for Euro 4 emissions (the original 640 wasn’t even Euro 1).

I’ve been curious about the other 1290 Super Duke since getting the GT. The R model weighs 15kg less, claims a couple more bhp, loses the fairing, screen and TFT dash. It also has lower bars, a narrower tank and seat and a much more aggressive, sporty attitude. KTM like to call it (best action-movie preview voice gents) ‘Thurrr Beast’ presumably to make it absolutely clear that it’s no beauty.

I like to call it the absolute opposite to Triumph’s Speed Triple. Where Triumph build easy to ride sensible bikes and then dress them up to look mean, KTM build challenging, aggressive, butt-ugly bruisers and then somehow make them incredibly easy to ride while still feeling wild and uncontrollable. 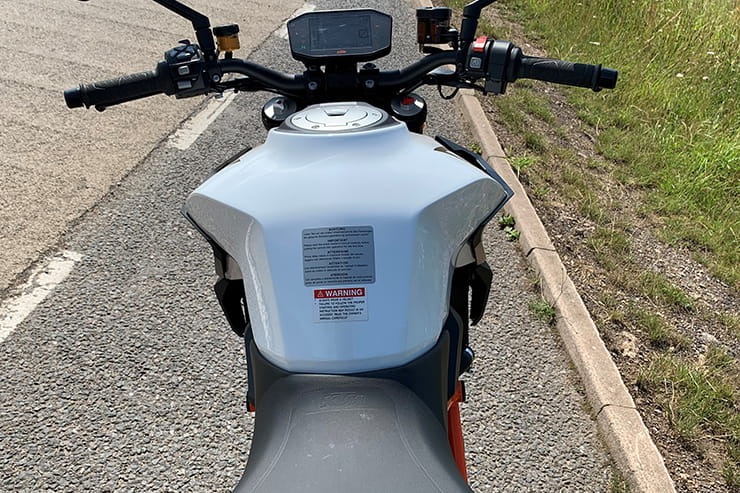 Narrow seat and tank, simple clocks are easy to use, menu functions on the left hand bar

The Super Duke isn’t about going fast as in you don’t see big numbers on the speedo. But while that part of the dashboard gets an easy time, the LCDs in the rev counter work bloody hard trying to keep up with an enormous pair of pistons knocking seven bells of hell out of a (presumably) enormous crankshaft.

The power comes at you like a turbocharged baritone buzzsaw, accelerating hard between 4-7000rpm and then tailing off to something a little more linear. With no screen and the rider hunched over the front everything feels even more brutal. Accelerate, brake, turn, repeat. That’s pretty much it. After 40 minutes your glands have squeezed out a summer’s worth of happy juice, life is perfect, I am invincible. Shall we do it again?

Without the GT’s electronic suspension the ride is a little bit harsher on a bumpy road. But without the bulk of the GT’s fat fuel tank the Super Duke R feels so much smaller, nimble and easy to control. If you keep the speed down it can be practical in the same way that if you put a frock on a road drill you could take it ballroom dancing.

£14,799 is a lot of money for such a single-minded motorcycle and I’d find it easier to justify that kind of cash on a discounted 2018 GT because I’d use it much more.

But there are plenty of people who spend a tenner a night on alcohol to have far less chemical enjoyment than this. In four years time drinky-bloke will have spent enough on nasty wine to have bought a Super Duke R and the resale value on his beer belly is a lot less than the equity you’ll have in a four year old KTM.

Surely that’s all the excuse you need. 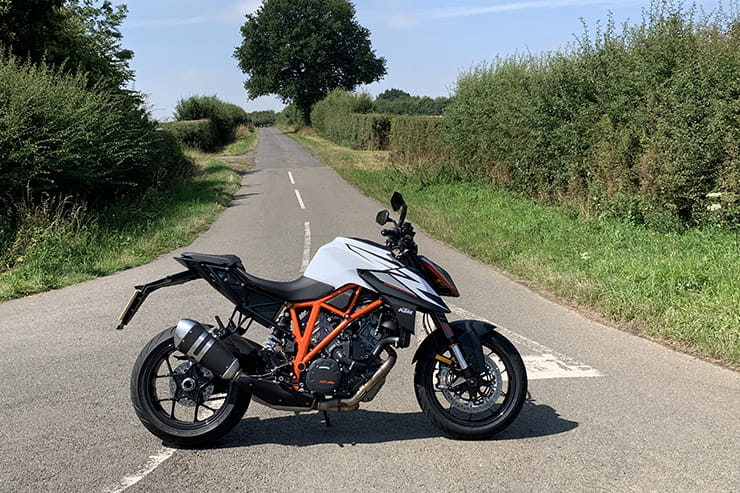 One of these or drinking on the sofa for four years. You choose

Three things we love about the KTM Super Duke 1290 GT