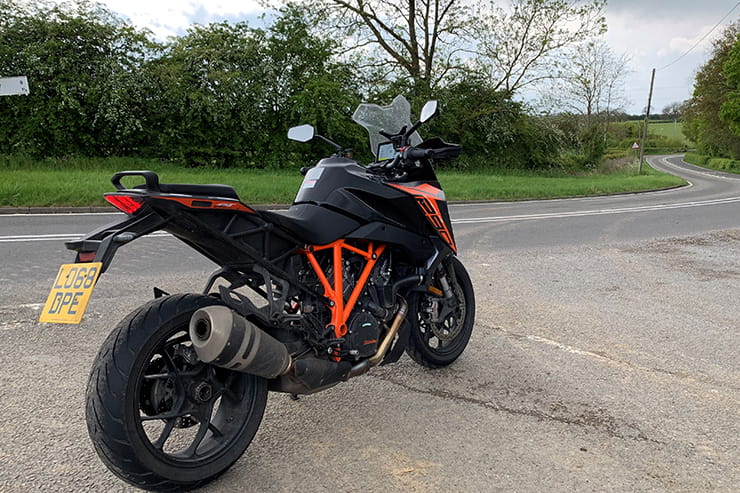 No longer just ‘The KTM’, Steve’s started calling it ‘My KTM’. Ah, bless. A sort of ‘Brokeback Bonkers’.

It’s been a busy year riding other test bikes on BikeSocial meaning I’ve only managed a relatively low 2000 miles in two months on KTM’s 1290 Super Duke GT. In that time it’s gone from being referred to in the office as ‘the KTM’ to ‘my KTM’ which probably tells you all you need to know.

In my simple world of road testing I now judge a bike on the giggles and the niggles.

With miles comes familiarity and with that comes acceptance that the niggles will always be niggles, but almost all are easily overcome by the giggles. In the case of the Super Duke the engine, riding position, suspension, brakes and absurdly easy way it covers distance in any weather and puts a smile on my face make it first choice for pretty much any journey. Last week was a really good example. Suzuki were holding a riding event for the press on the new Katana in the Cotswolds. Despite the torrential rain, I left my house half an hour earlier than necessary for the two-hour ride to Warwickshire just so I could go the backroad route. Even with the Duke’s electronics in full-on ‘loopy mode’ the round-the-midlands-rush-hour-yacht-race was enjoyable, invigorating, stupidly quick for the conditions while never, ever feeling dangerous. 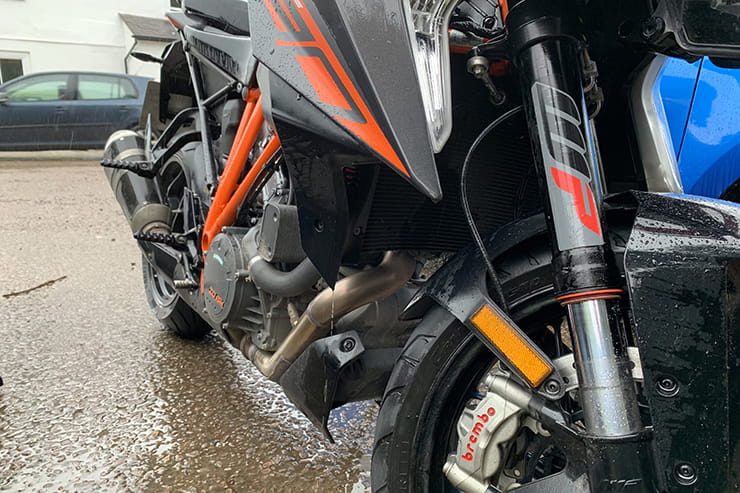 How wet? Five minutes after pulling up there is still water running off the radiator

There’s a huge amount of feel and feedback from the KTM’s throttle and that alone is enough to make riding quickly on what-should-be miserable roads enjoyable, involving and still feeling like you have plenty in reserve. Heated grips and handguards keep my pinkies warm and relatively dry even in thin summer gloves and Pirelli’s Angel GT tyres seem like a very good match for the Super Duke GT’s chassis.

Fuel consumption has settled down now the bike is run-in, averaging high-40s mpg – pretty good for a 172bhp sports bike in disguise being ridden by a mid-life idiot.

Today is the wettest of what’s been a month of very wet riding. Every time I’ve been out it’s chucked it down, but despite that a couple of weeks back I still set my fastest ever time from home to the Stafford classic bike show. Childish? Yes. But an early-in-the-year time trial tradition in which the two quickest times in the last ten years have both been set on KTMs (the last one was an 1190 Adventure). What I’ll learn today though is something about the quality of the KTM’s semi-active suspension. As riders we tend not to notice when suspension is good – we just enjoy the ride and assume the easy speed, confidence and composure are all down to our riding abilities. But you don’t-half notice when suspension is bad and Suzuki’s Katana has a set-up that really challenges my confidence and ability to ride as quickly as I want to in some very tricky conditions.

The contrast is stunning. Where the KTM was so easy to ride faster-than-I-ought-to, the Suzuki is a sphincter-clenching battle of resolve over maladjusted physics. In the end I get the better of it but only because I’m thinking about little else. KTM has recently announced that owners of the 2016-18 Super Duke GT can have the software in their suspension system upgraded to the latest spec…for free. That’s a terrific offer. If you have a mate with an older bike, let them know – they’d be crazy to miss out.

Back on the KTM for the ride home. It’s still raining, I’m still on the back roads and enjoying being back on a bike that responds to every teeny rider input like we’re connected. Because it’s a KTM the niggles are never far away and when I stop for fuel the filler cap won’t shut. More than ten minutes of trying fail to overcome the problem (it feels like the keyless system has operated the filler cap’s lock while the cap is open). The bodger in me thinks ‘tape it shut and ride slowly home’ but that’s as stupid an idea as it sounds and thankfully, the garage doesn’t sell tape.

So I resort to brute force and… actually I won’t tell you how I did it – I’m not proud of my actions. When I next tried to open the filler it was stuck in the locked position and required as much force to open it. Since then it’s been perfect – like nothing ever happened. 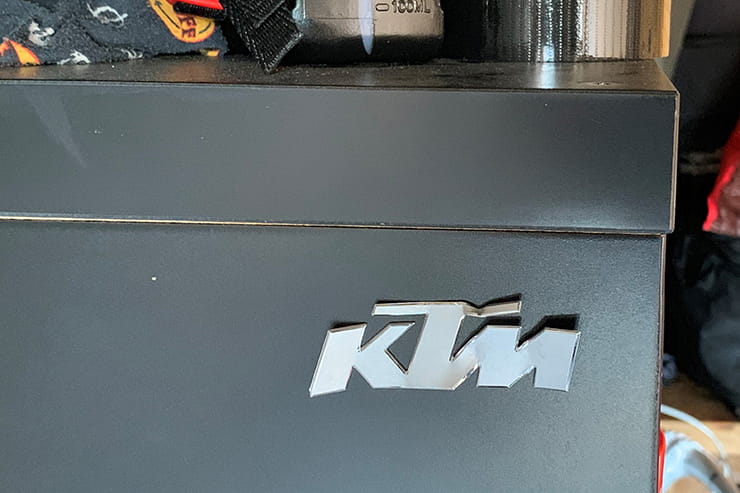 Tank badge came off the first time it was washed. That’s not good enough on a £17k bike

Other silly KTM-ness includes the metal tank badge coming off when I washed it, the swing-arm design making it almost impossible to lube the chain and the electronic steering lock continuing to be so inconsistent in releasing the handlebars that I’ve stopped using it and resigned myself to carrying a disc lock everywhere.

The other thing I was hoping to report on was the KTM ‘My Ride’ navigation app. A simple idea that connects the bike to your phone via Bluetooth, which then transmits turn-by-turn navigation instructions via the bike’s TFT display.

The app costs £7.99 and it’s only when you’ve downloaded it that you realise that your phone won’t connect to the bike. In fairness, my shiny new iPhone XR is a fussy connector and, despite following the tips and tricks recommended online it doesn’t always connect to my other stuff either.

But my old iPhone 8 is like a randy Jack Russell – it continually wants to connect to anything and everything. So I downloaded the app onto that too, but even that couldn’t connect with the KTM.

So it’s back to old-school pap-nav sticking a piece of paper to the tank with a map in my rucksack. I was disappointed it didn’t work because I want to use this tech, but the beauty of this bike is that it covers ground so quickly and safely I can afford to get lost because I always seem to have a spare half hour in the bag. Whether a bike costing this much money should have so many niggles is a question I can’t answer – I’ve never spent anything like that on anything that doesn’t have a kitchen and stairs. Other than the filler cap I can live with the issues, but then, I didn’t pay £17k to be stuck in a bike park, looking suspiciously like someone who is trying to break a steering lock.

Anyone else out there having the same problems?