How to: Improve a Honda Fireblade’s power and fuelling 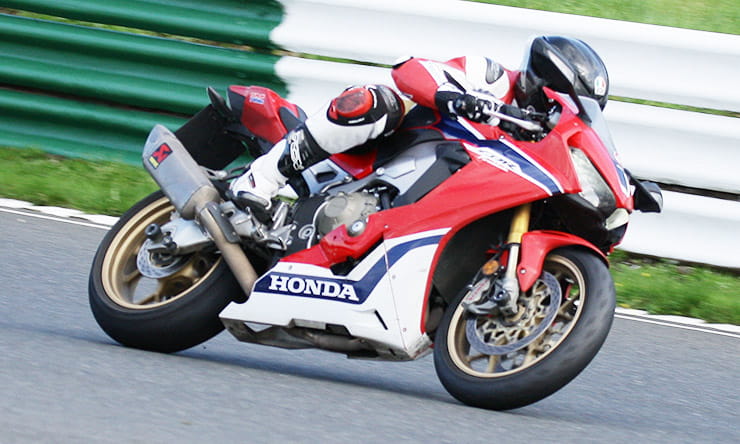 It’s fair to say that the 2017 Honda Fireblade SP endured a baptism of fire during its inaugural few months. While adored by many at the press launch it wasn’t without fault then accidents on the full SP2 race bikes by John McGuinness and Guy Martin meant the road bike came under serious scrutiny just by association which affected sales.

However, with a change of tyres onto a set of Michelin Power RS and a definitive rider setting courtesy of Ron Haslam, we’d ironed out the Fireblade’s issues. We even invited half-a-dozen readers and social media know-it-alls to Bruntingthorpe to try out the Honda where armchair opinions were remedied and no false neutrals were found.

After that dust had settled it was time to call our chums at Performance Parts who had lined up a full stainless steel Akrapovic race exhaust system developed by the Honda Racing BSB team for us to test, as well as a Rapid Bike Evo module designed to simply plug in and self-learn. After 100-miles or so the bike was due to take on an alter-ego – the module was to flatten out the power curve and offer a much smoother delivery by making small and continuous adjustments to the fuelling. 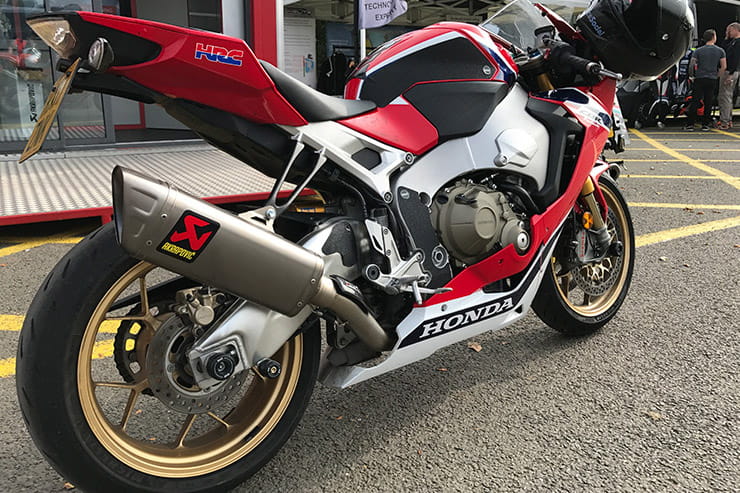 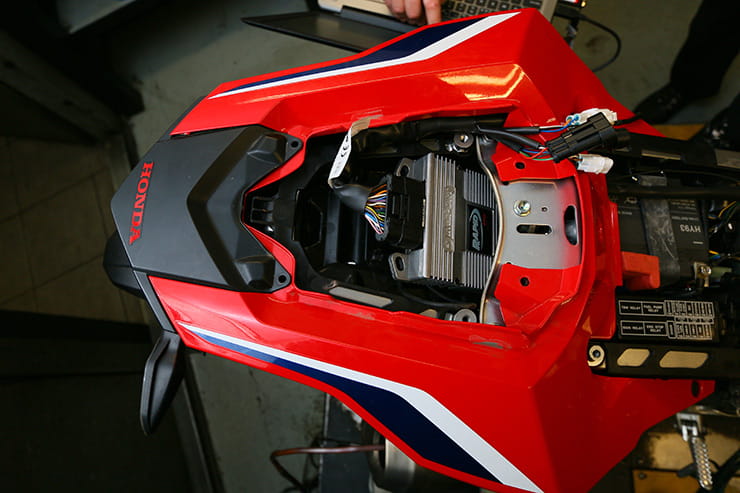 The full exhaust system is carries a weight-saving of 1.5kg yet a price tag of £1684 plus a required carbon hanger at £114 while the Rapid Bike Evo module price is £438. So, while an outlay of £2236 does include VAT it doesn’t include fitting. That may result in some teeth sucking but a brand new ‘blade is now available at £2,500 under its original RRP… and some dealers are offering 0% finance.

I rode with the system and module fitted for only three months and I speak the absolute truth when I say that I miss it every day since it was returned. The improvements made a significant difference to an already highly enjoyable riding experience. For those who’ve ridden the Honda CBR1000RR SP you’ll know what I mean – it’s doesn’t need to offer 195bhp+ at peak power like so many others do, because it’s all about how the remaining 189bhp combined with its lightweight 195kg (wet) acts on the road. The Rapid Bike and Akrapovic additions help to increase the power by 6.7bhp @ 7550rpm, torque by 6.8Nm @ 3100rpm and noise level by 6.6dB, which took it to 101.6dB static @ 4,500rpm.

How does the module work?

“Euro 4 regulations state that a bike has to have an air/fuel ratio of 14.7:1 – which basically means they’re trying to get it run on fresh air. However, a target of 13.2:1 is the most efficient burn or where you get the most bang for your buck and it’s the way the manufacturers would set it if there weren’t any EU laws.

So, the Rapid Bike Evo module fools the standard ECU into feeding more fuel by giving it a different target ratio for the AFR (air:fuel ratio). And it does it straight from the bottom. The regulations have changed so instead of a static noise test you now have to ride into a coned-off area at a certain speed and then exit at a higher speed so you’re demonstrating noise under acceleration. 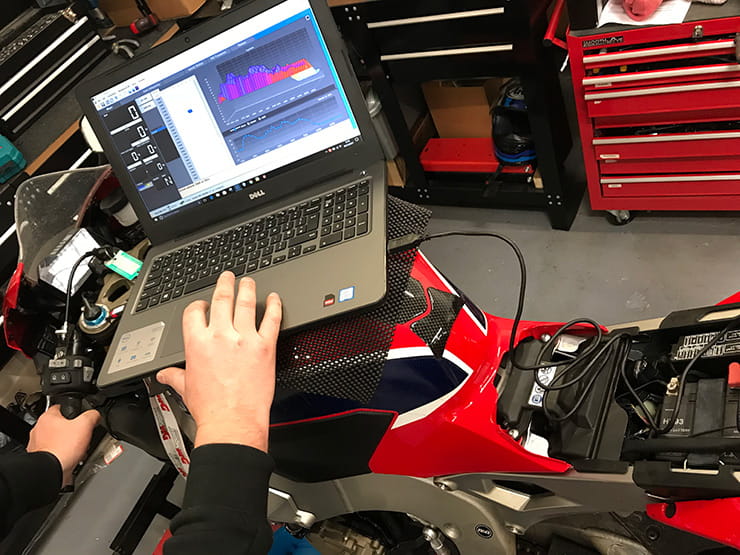 What a lot of the new bikes do is offer very little fuel (at the bottom of the rev range) then they come in at 7,500rpm which is the end of the testing range. So, manufacturers know the testing area and they found a way to defeat, it which is recognisable in the power curve’s step.

But this Rapid Bike Evo module eliminates that dip and offers a linear power curve straight the way through. The Akrapovic is about gas flow; the faster you can get gases to run through a motor then the quicker it’ll rev and the more power and response it’ll give you. It’s also a lot lighter than the standard system (this is the racing stainless system from the headers to the muffler, which is solid titanium) and was developed by the Honda Racing Team designed and made especially for this road-going Fireblade. It does away with the catalytic converter and noise valve because it’s a racing system. It does have a baffle insert which should keep it under 105dB. 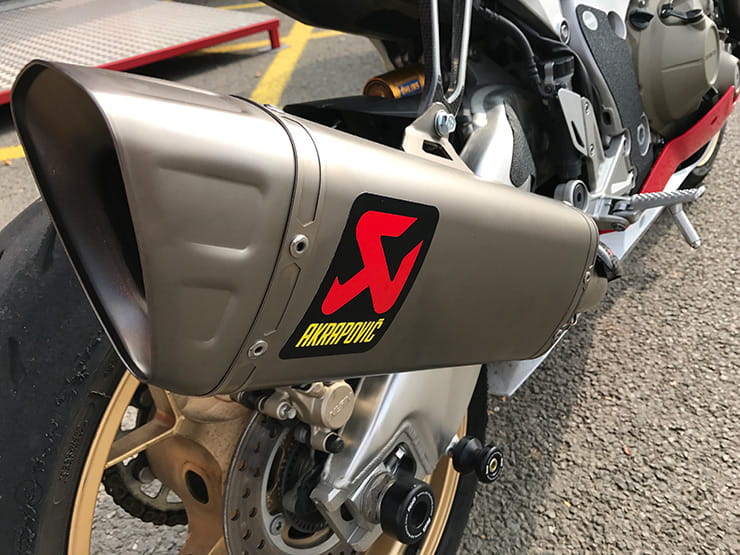 The module is self-learning. If you look at RPM down one side of the injection map graph and throttle position sensor down the other and the more time you spend in each cell the more it’ll learn about how it’ll apply more fuel or not. Obviously on track you’ll use more of the rev range while on the road you’d be using less throttle action and therefore the system will be monitoring every combination, theoretically.

The figures show the percentage of time that the injector is open above and beyond what the standard fuelling map in the standard ECU is showing and therefore how much more fuel it’s giving on each firing sequence. You then have an additional map that works in conjunction and the really clever thing about this is the standard map can make adjustments for atmospheric pressure, what type of fuel is in the bike and the riding style.

For example, while at 4,100rpm with 10% throttle open, the injectors are open for 12% longer for a more effective power delivery. If we’d have put an air filter on as well as the exhaust system and Rapid Bike Evo module there’s be an improvement in air and gas quality.

So, if you put a high flow air filter and a race exhaust system without remapping the fuelling or modifying the fuelling it’ll run extremely lean and, if you spend a lot of time at high revs such as a race track, there’s a chance of destroying the engine. 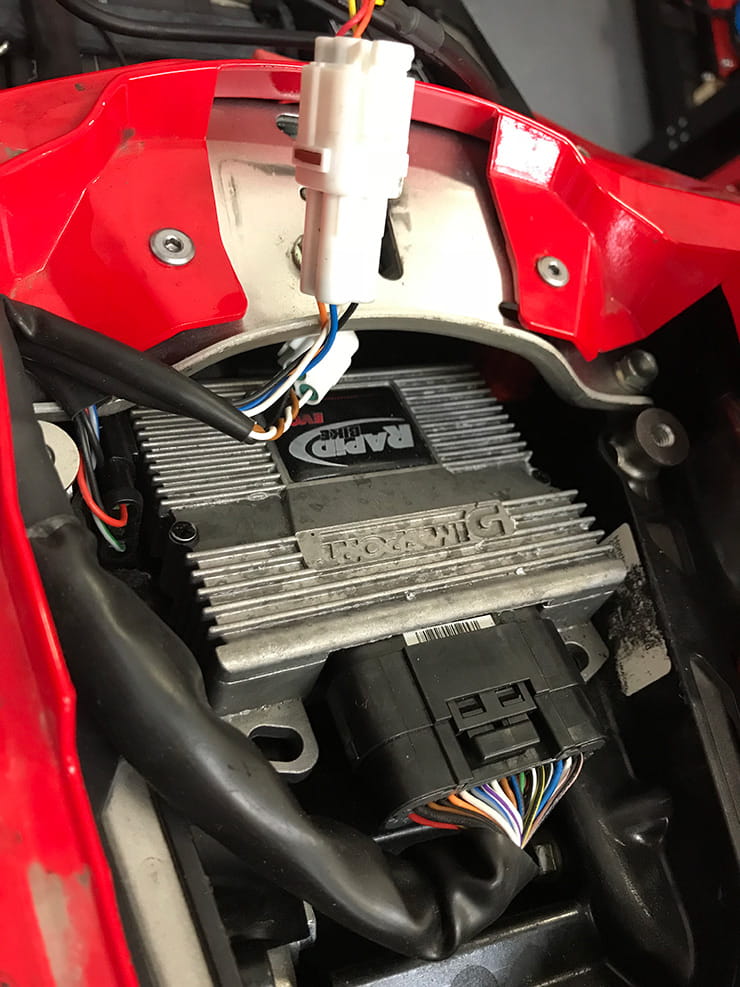 It’s self-learning system and once you’ve got a good base setting it’ll learn and make the adaptions to maximise the performance of the other parts that have been added on. It’ll continue to learn all the time and builds a map that will continue to fine tune. In order for it to build a second map in the auto-adaptive function, it has to have spent time within the cell with a certain amount of revs and a certain amount of throttle opening – so long as the two have met, the module will learn and of course the more time you spend in each cell the more refined the learning will be.

It’s designed to find the perfect 13.2:1 but the only constriction is the LAMBDA sensor which has a narrow band for gas analysis maybe ideal for Euro4 but not for performance motorcycling. We’re trying to get the air:fuel ratio as close the magic 13.7:1 as possible.”

All clear? Well, if I owned a new Fireblade I’d be scraping together every penny to enhance my bike with these two additions. 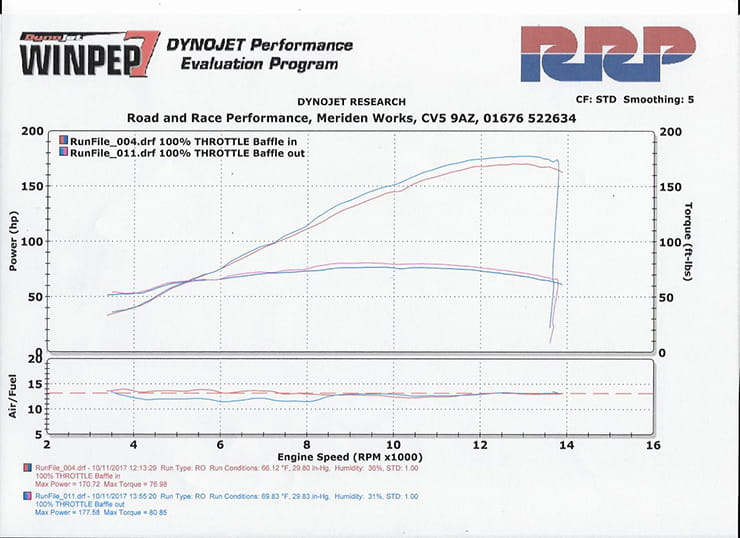 While having a baffle in the exhaust will make the bike compliant to the noise police circulating at your nearby race track, as we found out it will also restrict the maximum power output by up more than 6.5 bhp and peak torque by nearly 4 Nm. The power and torque differential is only noticeable on the dyno graphs above 8,000rpm.

Before you splurge ask yourself what you want to gain from an exhaust upgrade or fuel module combo. Is it looks and noise? Performance maybe – but where? Top end or where it matters in the sweet spot in between 6-8,000rpm? Or is it make that throttle response crisper and power delivery smoother because in my experience this tidy little combo does it all. It’s worth a conversation with your local experts so they can establish and even recommend what product(s) will make all the difference.