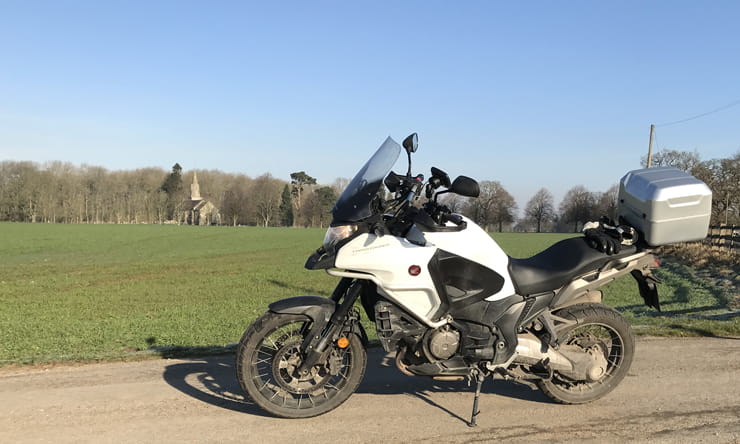 Its 5.23pm, I’m in Maidstone, Kent at the end of two long days, one daft hangover and not enough sleep. Thing is, I really need to be in Horncastle, North Lincolnshire, 186 miles away before the heavy snow that’s forecast arrives at 10pm. If I can average 60mph including stops I should make it. There’s just the small matter of the car parks that are the M25, the Dartford tunnel, M11 and A14 standing in my way. Thankfully I have the perfect bike for the job. 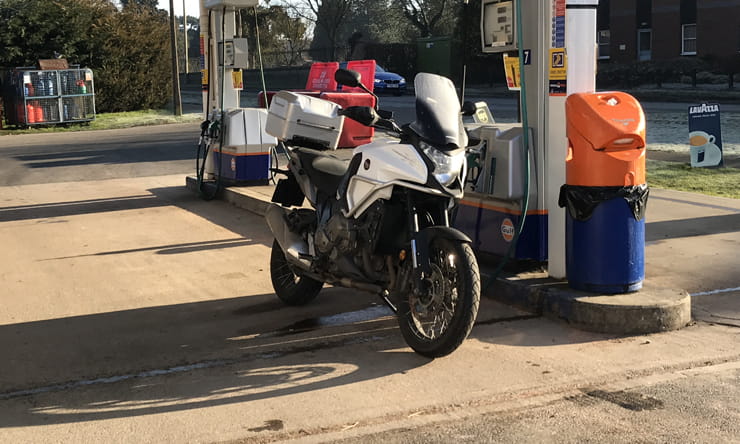 Honda’s VFR1200X Crosstourer has really grown on me this winter. It’s everything a good Honda represents. Which could be a veiled insult for suggesting that it’s not the most memorable, exciting of spec-sheet-busting piece of machinery. But it isn’t an insult – it’s the opposite. This is a bike that grows on you because it makes difficult things like Maidstone to Horncastle in sub-zero temperatures so flipping easy. Sometimes you need the right tool for the job. And, in the same way I wouldn’t trim my nose hair with a chainsaw, what I don’t need now is 180 million horsepower, 18 levels of traction control to choose from and switchgear that needs a doctorate in ergonomic engineering. The Crosstourer delivers more horsepower than an early 90s superbike, more torque than most big V-twins, has a semi-automatic gearbox that makes filtering easier than ever, simple one-touch traction control and ABS, a decent screen and the best headlight I’ve used all year. Plus, the 21 litre tank is good for an easy 200 miles, which was handy, as it happened because I had to take a ten mile detour when the A14 was closed. 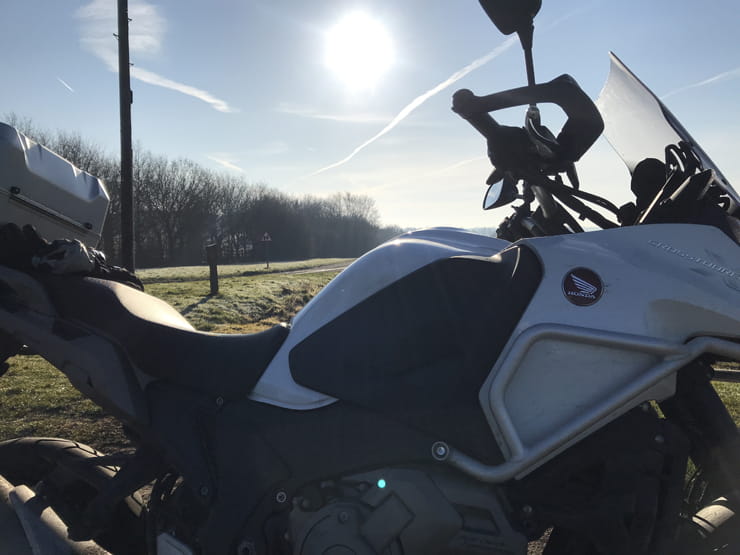 What the spec sheet doesn’t tell you is how naturally the big VFR balances at low speeds. It has a poise and confidence that makes creeping through traffic and dawdling up to roundabouts with both feet up so easy that you almost forget to put a foot down when you have to. That might not be important in corner-crunching motorcycle fantasy land, but it makes a hell of a difference at 5.57pm picking a route through London’s evening rush hour. 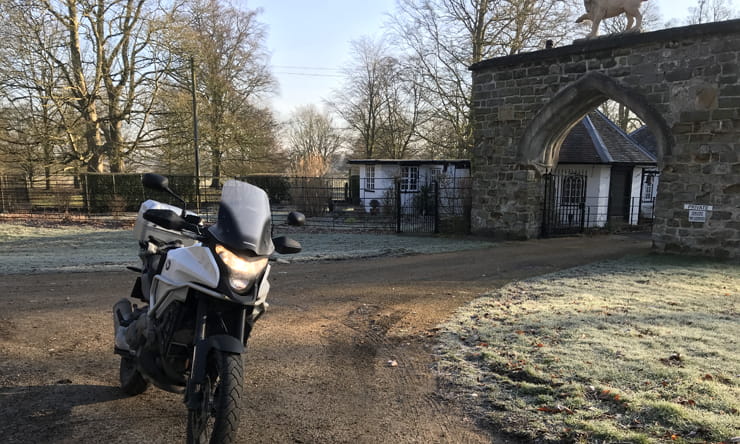 Three hours and fifteen minutes after leaving Maidstone I walk through the door of the pub I never thought I’d reach before closing time to a plate of still-warm food optimistically ordered by a family who never really believed I’d be there either. I’m knackered, but upright and able to function thanks to the Honda’s easygoing riding position and a seat supportive enough to not get noticed. We’ve not been going nuts. Not even breaking the law…much. But we’ve not been held up by much either. The run-up to Dartford was four miles of slow, but easy filtering and the top-right corner of the M25 was similar. Not having a clutch lever on the DCT gearbox makes filtering a doddle, although the VFR’s mirrors are at white-van height and the left side ball joint is now getting a little slack after high-fiving a few too many Transits. 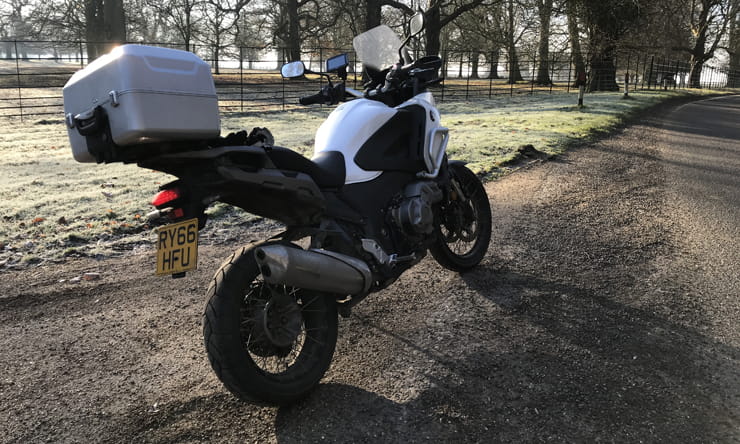 Two days ago I did a top-to bottom ride through London on the way to Maidstone because I wanted to see if bikes have been squeezed in the capital as badly as everyone says. It was a nightmare. All the filtering space has disappeared and for riders like me, lost without a sat-nav, it’s hard to commit to nailing it to the front of a queue when you don’t know which way you’re turning. Enfield to the Blackwall Tunnel used to be a favourite of mine, but it’s no longer the empowering, enjoyable London riding of old, more an exercise in survival. It would have been easier if the self-cancelling indicators stayed on for longer. They mostly stop working long before I reach the junction. Although, to be fair, no one else indicates in London so maybe I’m worrying about nothing.

And, while a bike this tall, this wide and this heavy might not be the best choice, but it was mostly me, not the Honda holding us back and when it needed a quick bump up a kerb or across a traffic island, the fauxdventure suspension was up to the job. 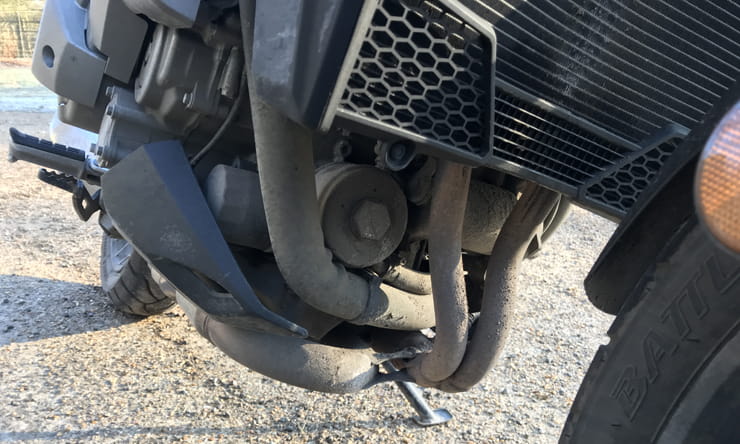 After close-on 3000 winter miles on Honda’s Crosstourer only the heated grips still bug me. Riding through central London in 14 degrees of spring sunshine with the grips on maximum and winter gloves, my hands were just starting to be too warm. Not so bad to turn the grips down, but the first time my hands have felt warm, as opposed to just ‘not cold’

• Expensive for what you get 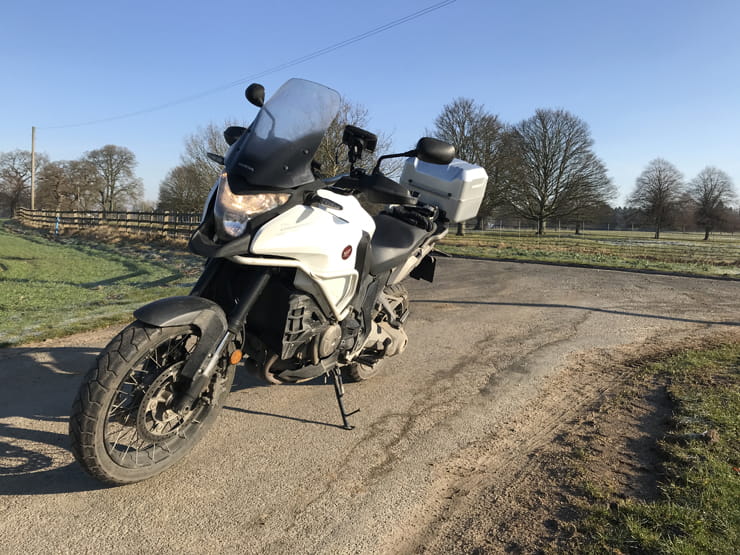