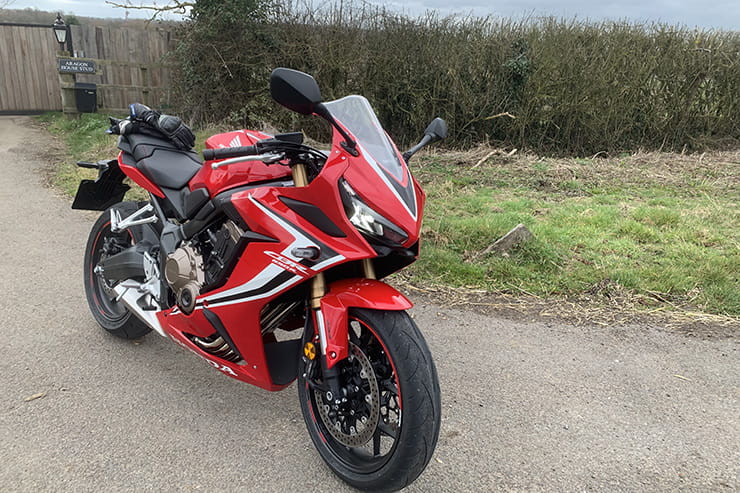 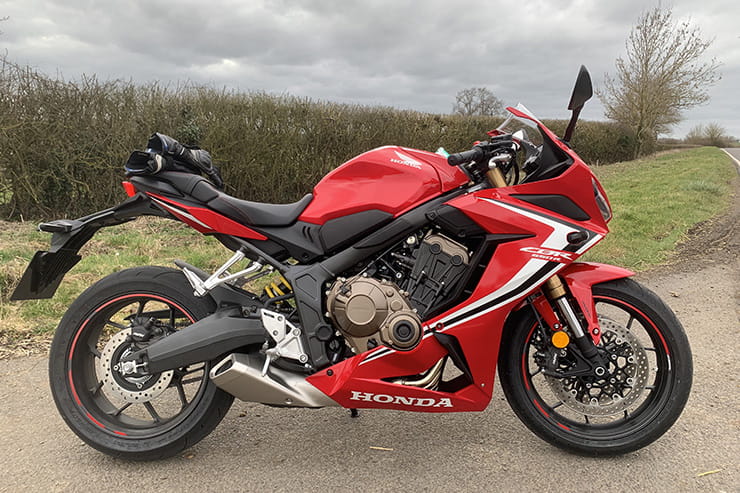 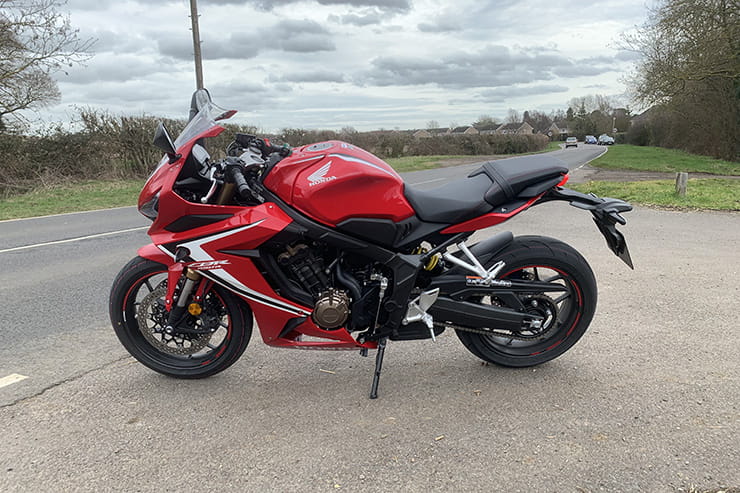 Am I the only one who enjoys running-in a brand new bike? There’s something about the enforced evolution of learning and shared bonding that bypasses the impatient among us, but I enjoy that feeling of a gearbox getting slicker, suspension easing-up and brakes getting stronger.

So when the call came through that BikeSocial’s long term test Honda CBR650R was ready for collection it was my hand first in the air to collect it. Honda technicians had done the pdi and put 21 miles on the clock, but the bike still felt brand new. The brakes weren’t bedded-in, suspension still had that ‘crashy’ feel before the damping oil worked its way through all the shims and the tyres were still a little slippy.

Taking the twisty way back to the office to make most use of throttle, revs and gears let me settle into the riding position and controls. For anyone who rode in the 90s and noughties this CBR feels an awful lot like an updated version of the classic steel-framed CBR600F of the period. That’s a massive compliment by the way. That bike was a machine that could hold the hand of a new rider, but also satisfy the most demanding road rider, win hundreds of races all over the country every weekend and demolish the Isle of Man TT course at ridiculous speeds with a half-decent safety margin of reliability and stability. History will (or at least should) see those mid-90s CBR600s as the greatest motorcycle ever built. Ever… Apart from a Yamaha TDR250, of course. 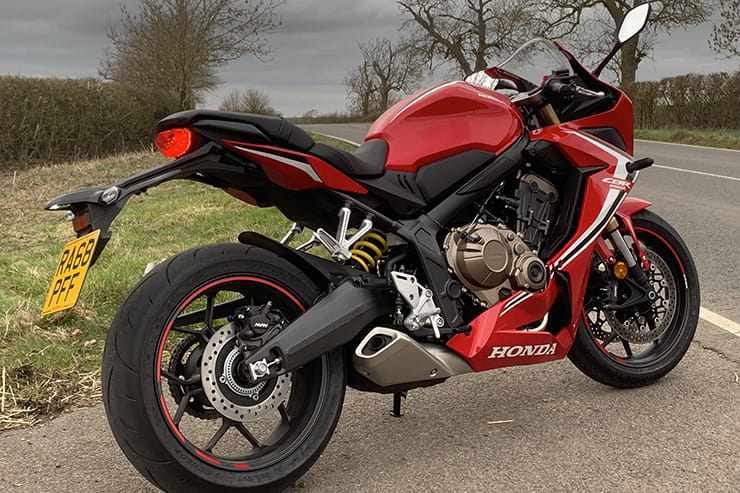 Looks great in the Fireblade-replica colours

And this one feels like a 21st century version of that earlier CBR. Comfy, but sporty, fast enough (even at half revs running-in), but easy to ride, nimble and stable too. Bikes like these are the hot-hatches of motorcycling; fast, frantic, accessible, practical and very, very good value.

The Honda’s trump card is the flexible-but-still-revvy four-cylinder engine, which makes the CBR feel a few degrees sportier than Kawasaki’s Ninja 650 twin. Some might dismiss the Honda’s 94bhp as not enough, but wind back a few years and Honda’s legendary RC30 felt (still does) pretty damn quick with not much more and even an early FireBlade only made about ten bhp more. Plus this bike has the latest fuel-injection and ignition technology, making the whole spread of power easily accessible. And if we look back to those days of previous 94bhp fully faired middleweights, it should be good for a top speed nudging 150mph. That’s fast enough for me.

A couple of other riders found the CBR very buzzy, complaining of tingles in the groin, which is a bad thing, apparently. I didn’t notice it at all and Si Hargreaves didn’t mention it on the launch, so it’s either a new-engine thing which will disappear with miles or maybe a riding-style issue. Either way, it reinforces why a test ride is always a good idea.

Wind on the power out of a corner and you won’t quite keep up with a 2019 Fireblade or BMW S1000RR, but you’ll catch up with many of them by the next corner because they’ll be going faster than they planned-to before panic-braking too early and actually cornering slower, while the CBR650 rider goes slightly slower between the corners, panics less, reads the road better to corner quicker and keep up. Beyond the litre-boys’ bravado and bull-poop, we all know it’s true.

On a track day it’ll be different because track riding is all about full throttle or no throttle and any of the superbikes will murder a CBR650, as you’d expect. But on the road, you’ll be there on the 650 every time. 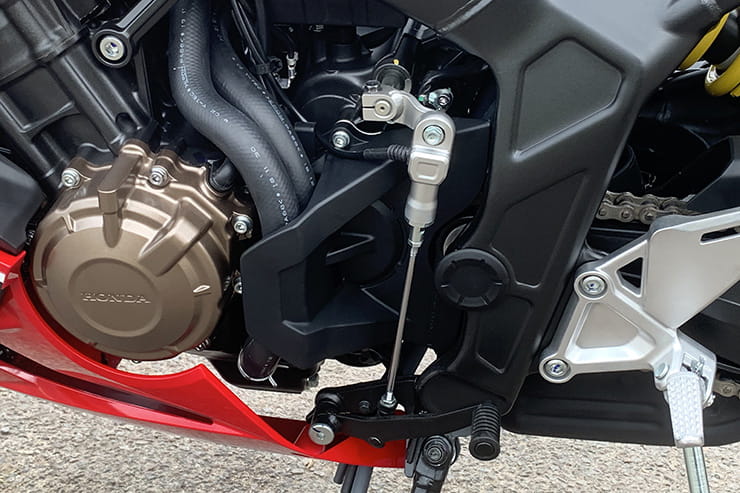 Stacked gearbox is a legacy from the mass-centralised, supersport CBR600RR

It’s still early days, but the defining memory of the first couple of rides has been the way the CBR steers. Pick a turn-in point, nudge the inside bar and the CBR obligingly takes up your chosen lean angle and line. Ease the pressure of the bar and the bike just flows around the corner on your chosen line with no fuss, no drama and no worries. It took 100 miles before the suspension settled into that lovely balance between performance and ride quality that Honda do so well on mid-spec bikes. Talking of Honda-ness, I love the way the sporty-looking, compact fairing did such a good job this morning keeping the rain off my legs and upper body when I got caught in a shower without waterproofs for five miles. That and the light clutch action, slick gearchange and mirrors that show enough of everything to be useful. 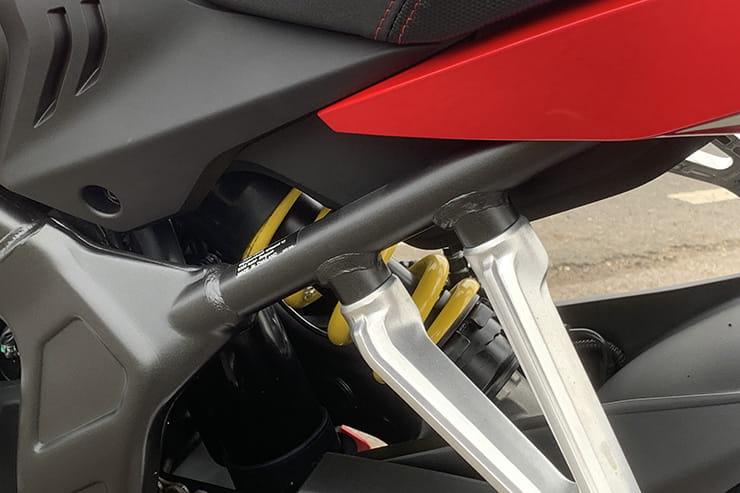 Simple suspension works well in all situations so far

The brakes are surprisingly strong, but with plenty of feel and the ABS is not intrusive, even on the rear, which can be a problem on softly-sprung bikes. I’m not sure why the hazard warning lights flash on the dash when I brake really hard, but it clearly made someone at Honda happy, so I’m cool.

I have a hunch that Honda will sell a lot of these in 2019. It looks like a Fireblade, goes like a sports bike you can use, is much more comfortable and easy to live with than something like a Yamaha YZF-R6 or Kawasaki ZX-6R and costs a fraction of their price. In fact at £7799 the 2019 CBR650R with all its state-of-the-art fuel-injection, rider aids and development is near-as-dammit the same price as a CBR600F cost back in 1996. If that’s not a bargain I don’t know what is.

Three things we love about the Honda CBR650R

Three things we’re not sure about yet