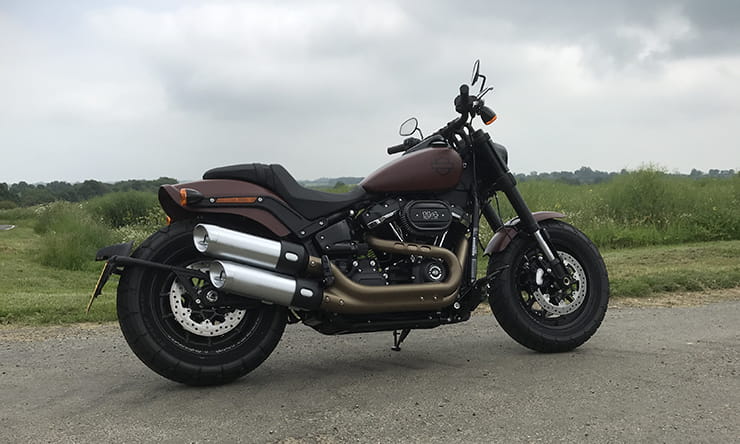 BikeSocial has a Fat Bob on extended test this summer, here’s what we made of the first 500 miles.

It’s been a while since I rode a Harley that makes this much of an impression. Maybe even as far back as the V-Rod. The Fat Bob might have a rubbish name but it’s a bike that attracts attention of both riders and non-riders alike. Maybe the name is an assumption that if you buy a Harley you need to get used to the sneers and the insults so why not start at the dealer, who knows?

Our bike is still very new, but first impressions are mostly very good. It’s done a mix of long, short, straight and twisty journeys and, as the engine loosens up it’s getting better and better. 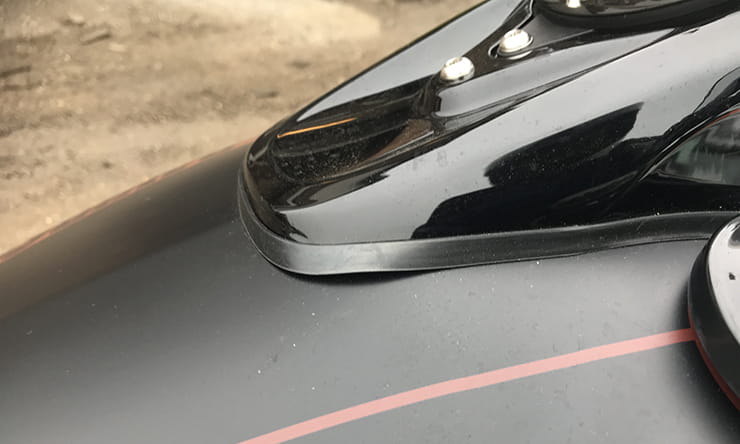 It’s a long time since a new Harley made such an impression style-wise, but the design team who built Bob deserve an extra doughnut. From ten feet it looks stunning. From five feet you start to notice that the huge, fat exhaust pipes are actually only a cover on some standard, skinny items, but as you get even closer that doesn’t matter. The way the handlebars taper is a lesson to other custom builders (and makes Ducati’s XDiavel’s items look as nasty as they really are). The paint job and cosmetic finish is superb and the whole bike manages to look cool and futuristic, while still being absolutely everything Harley Davidson stand for. Then there’s the bold headlight design, the flamboyant exhausts and wacky number plate hanger. Love it 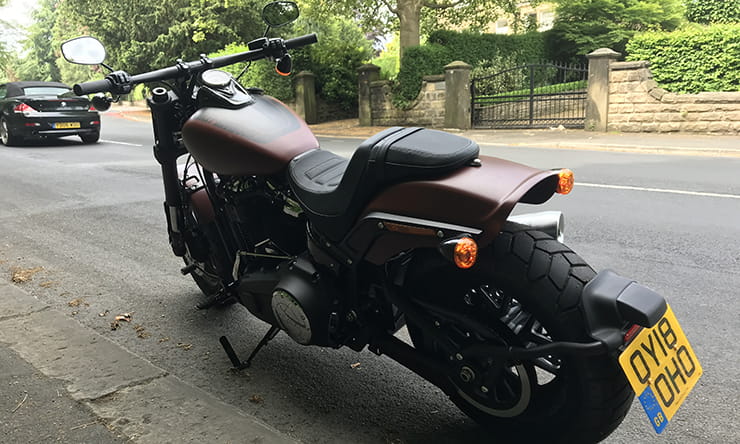 Sadly, HD’s ergonomics team appear to be on sabbatical for the moment. Last year’s Street Rod and this year’s Fat Bob may well look the part and go pretty well, but it’s hard to see how anyone could make a motorcycle less comfortable. Fat Bob has a cool-looking, comfy seat, but the forward pegs make distance a chore, you can’t operate the back brake effectively and the handlebar position makes it harder to steer the bike how you want to when the going gets twisty. Add that to the slightly cumbersome turning properties of the 150-section front tyre (that’s 25 per cent fatter than almost every other bike on the planet) and instead of the riding experience being simple and instinctive, it becomes considered and slightly laboured.

130 miles on the motorway numbed three fingers in my right hand and my wrist ached after less than an hour. The following day my knees my felt like I’d run a 10k race. 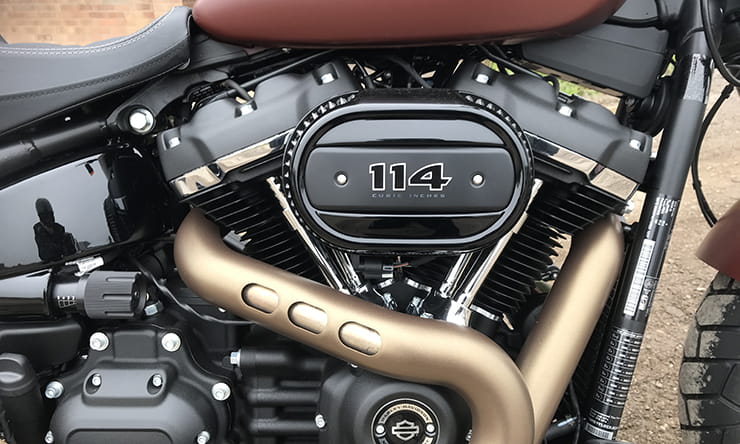 There are two options. This one has the larger 114 cubic inch engine, which translates to 1868cc (multiply the CI figure by 16.38 to convert - one cc is 0.0610237 of a cubic inch). It’s based on the latest motor used in HD’s tourers, but this one is air and oil cooled, without the water-cooled heads (no room for the radiators with this styling, just an oil cooler between the frame tubes). Two balancer shafts do a really good job of smoothing out the vibes. Cruising at 60mph in top gear the engine is so smooth that you actually notice it, which sounds weird, but it makes you realise how vibey other big twins can be.

The clutch is light, for a Harley and unobtrusive when filtering through rush hour traffic. Gearchanges are clunky enough to remind you there’s some serious mechanical movement going on in there, but it always goes in with a re-assuringly positive ‘thunk’. 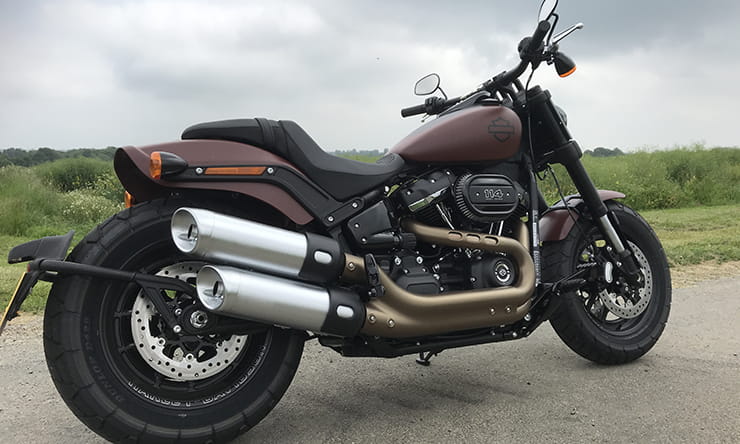 The fuelling is spot-on too and this ‘two-pints-per-cylinder’ V-twin pulls easily from just below 1000rpm right through to 5500rpm, although in the first five (of six) gears you’ve changed up long before that – peak torque (114lb-ft) is at 3500rpm and you feel it drop away soon afterwards. Harley don’t like to talk horsepower, but their German importer quotes 93bhp for the 114 engine, which sounds puny, but remember that bhp is torque multiplied by revs and this bike only revs to 6000rpm.

Ridden in isolation, the Fat Bob feels quick and punchy. Ridden in typical British A-road traffic and it lacks the thrust you need on a motorcycle to overtake effectively. Maybe it’s the weight (the fat part of Bob equates to 306kg ready to ride) or maybe we underestimate  how much faster modern cars have become, but I had a lot more challenging overtakes on this than I usually do. Let’s see how it feels with some more miles and loosened-up engine.  80mph comes up at just below 3000rpm and motorway cruising at that speed still returns 50mpg. Chugging through town nudges that mpg up to late-50s, but a spot of spirited, high-speed, cog-swapping suspension testing down some favourite b-roads dropped consumption into the low-40s. Our bike is still relatively new though and we’d expect consumption to improve even further as it loosens up. With a 13.5 litre tank, that equates to somewhere around 160 miles range. 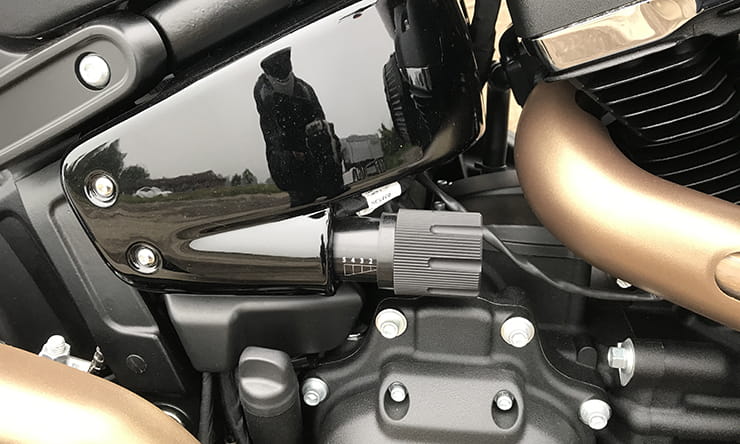 Harley rationalised their ranges last year, ditching the twin-shock dyna chassis to focus on the softails (which use a single shock absorber hidden in a frame designed to resemble a vintage hardtail). The Fat Bob has a new frame with increased stiffness, new suspension including a shock absorber with remote preload adjustment and fat, upside-down Showa forks. The brakes are uprated too – twin four-piston calipers at the front work really well, which is good because you can’t get enough stomp on the rear pedal to do much else other than switch on the brake light. The sporty-set suspension has enough control to cope with fast corners and just about enough ride quality to be comfy too. The remote preload adjuster on the rear shock is useful, but positioned so close to the exhaust that you can’t twist it while the engine is hot.  All-in-all it’s a good package and Big Bob is surprisingly confident on a twisty road. Think of your favourite early 1980s superbike (Suzuki GSX1100E or Kawasaki GPz1100) equipped with mid-90s radial tyres and carrying a pillion and you’re just about there. Firelade owners need not worry, but, their bikes won’t attract the attention the Harley will wherever you pull up. This is another step in the right direction for Harley and on a fast blast down my super-secret test roads between Guy Martin’s pub and Cadwell Park the Fat Bob was genuinely impressive. 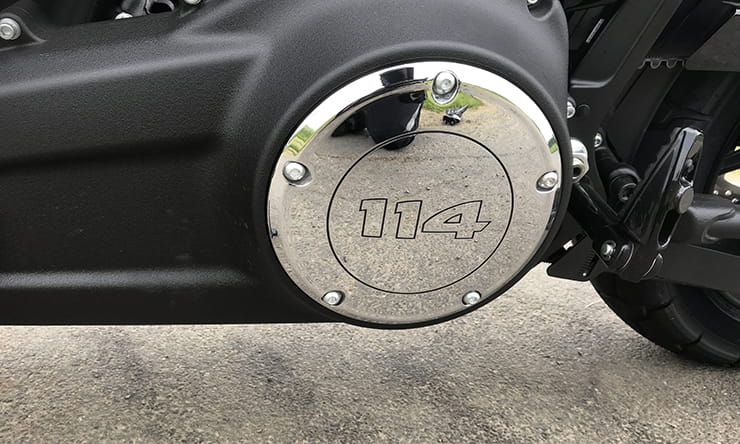 Before I rode it, I’d half-volunteered to ride our Fat Bob the 900 miles to Harley’s European rally in Prague. After the first 500 miles I’m not so sure. The engine and chassis will be great on that run, but I can’t imagine what state my poor, ageing bones will be in after three days hunched into that position. I have another long day planned on it next week, let’s make a decision after that. 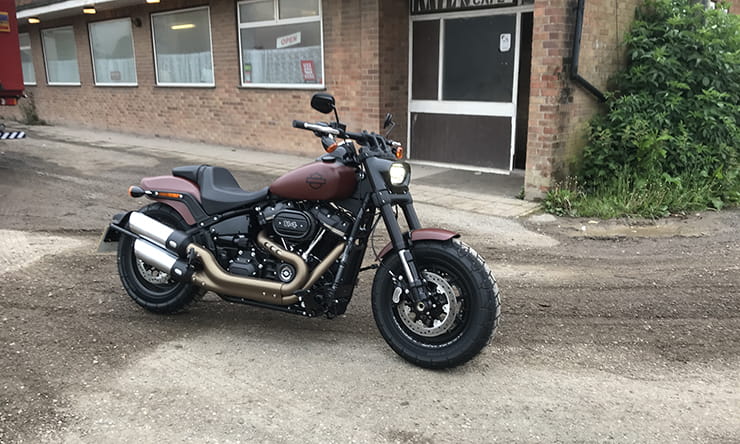 If motorcycling had an annual award for ‘most improved manufacturer’ Harley would walk it. These days they have smooth, powerful engines, lightweight clutches, chassis that handle, brakes that stop, suspension that controls a corner and soaks up bumps and they almost never break down. Seriously, if my lottery numbers come up, a Street Glide would be one of the first bikes I’d buy.

But there are still some challenges for next year. The good news is that after 221 miles on Harley’s new fat Bob, three out of the four indicators were still attached and pointing in the right direction. The bad news is…, yup, you guessed it. Add in the half inch gap between the instrument binnacle sealing rubber and fuel tank and the occasional random alarm triggering (I didn’t know that bike alarms were even still a thing) and it’s easy to overlook the good points of this bike for the stuff that… well, let’s just say the stuff you would never ever get on any other bike. At the time of writing, with 550 miles showing nothing else has gone wrong.

Harley’s build quality has got much, much better in the last few years, but, evidently there is still some work to do. The fantasy might be that your HD is hand-assembled by Bruce Springsteen, sadly the reality is that Homer Simpson and Barney are still helping out.

Ok, so one wobbly indicator and a lifting instrument seal might not be a problem, you say. But if you can miss that, what’s to say it won’t be the handlebars coming loose or the brakes falling off next. I don’t think it’s unreasonable to expect your motorcycle’s assembly to be finished when you ride it away.

Build quality aside, first impressions are that the new-for-2018 Fat Bob is a good bike that moves Harley styling forward, builds on the technical improvements and, in the current market represents good value too, especially considering HD’s resale values. 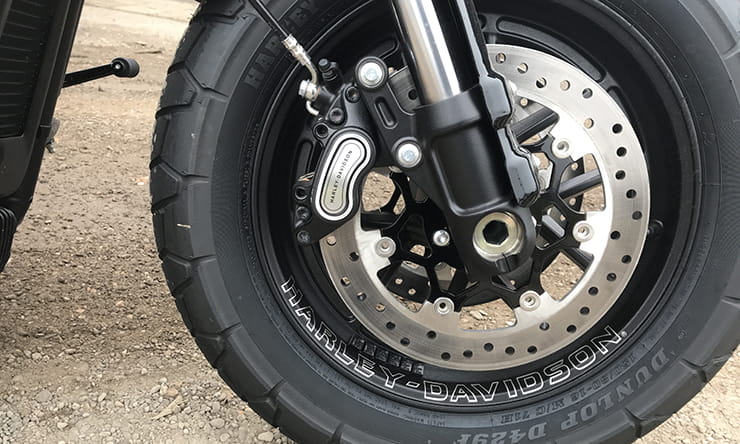