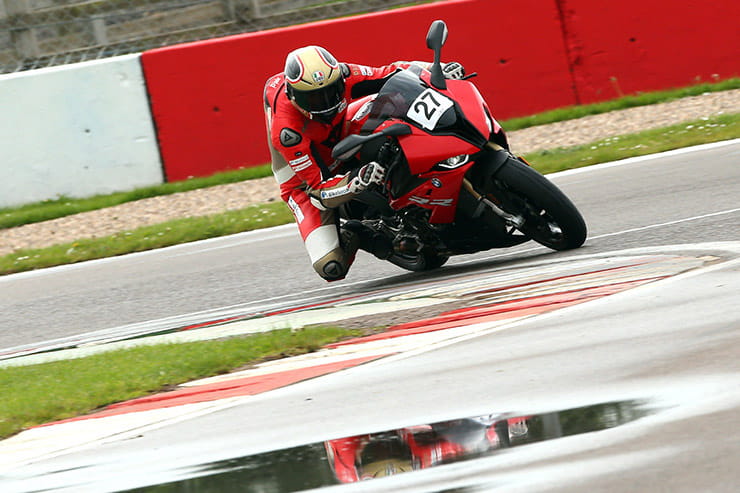 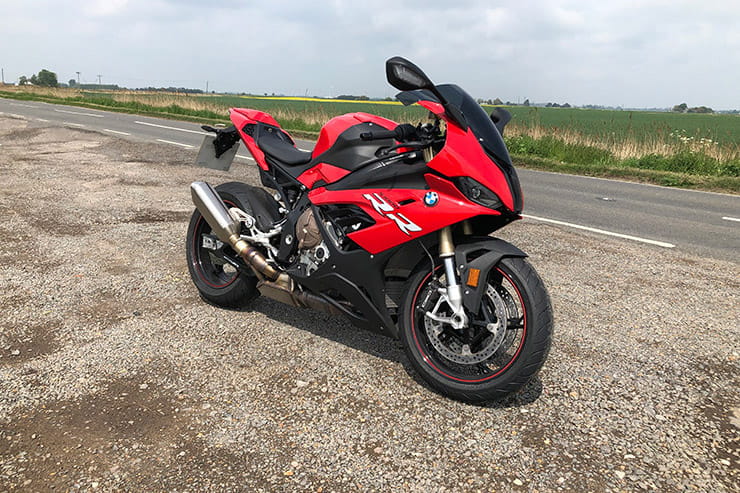 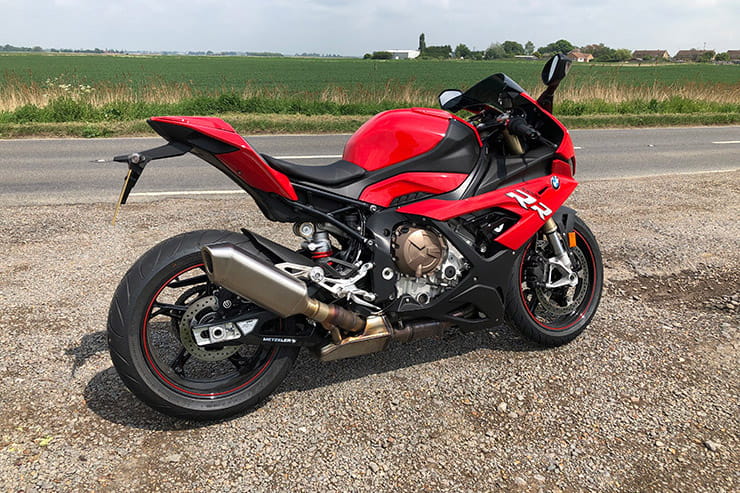 The 2019 S1000RR story hasn’t got off to a brilliant start as far as BMW are concerned. Despite announcing their headline new sportsbike last November at the annual EICMA show in Milan, 10 years on from their original S1000RR, customers are yet to take delivery of theirs here in the UK.

So, when the phone rang with an offer of an S1000RR fitted with the M Package as a long-term loan from BMW, just like the version I’d ridden at a very damp Estoril on the press launch, I felt a little guilty. Why should I be riding one when the paying chaps and chapesses haven’t got their yet? I soon saw the error of my ways and learned the bike I would ‘own’ for a short while would be a pre-production model so it wasn’t like I was doing any customer out of their machine.

Turns out the M People Package version wasn’t available either so the Sport came my way for a couple of weeks instead. And no sooner had it been unloaded at BikeSocial HQ, it was soon scurried away into our own van and off towards Donington Park for the Bennetts Customer Track Day – what a baptism of fire for the BMW, though it had been run in already.

Turns out that when reducing the tyre pressures, the on-board sensors don’t really like it. In fact, having ignored the amber warning for three laps the bike took its hypothetical ball and went home by telling me to ride to me nearest dealer. The very, very clever computers, sensors and brain of the bike had realised the situation it was in wasn’t terribly safe and went into limp-home mode by only allowing me to use a maximum of 6000rpm which is fine if there is something actually wrong but on track, even with track mode selected, there was no way to out a loving arm around it and say “it’s ok”.

Once the far more scientific version of Ctl+Alt+Del was pressed back at BMW’s press fleet distribution warehouse I was back up and running. On track the bike is fierce yet dainty like a dragon mixed with a prima ballerina. The sexy, smooth in-line four roars into life on the press of the ignition switch and sits at 1000rpm more than it needs to for the first 10 seconds before settling down into more of a tinny rattle. The sweet and instantaneous quick shifter is a gem, one of the best I’ve ever used, though the downshift can be a little spongey, so much so that a quick glance at the very trick dashboard is required to check the gear selection. Rev the pants off it and feel rewarded. While on the road the S1000RR’s motor is all smooth and extremely rider-compliant, yet the sub-9,000rpm Shiftcam threshold is relatively subdued so, just like a 600, to get the kind of urgency that makes your eyes stand on end then treat the accelerator like an on/off switch. However, do that it any gear from 3rd and above and you’re instantly looking at trouble from the law. So, stick to the track if you want to feel the full force of its 204bhp.

Breezes through the back roads with ninja-like prowess. The extraordinary chassis is accompanied by suspension that is compliant with any road, once you get used to where the options are on the iPad-esque dashboard. Still operated by the now-traditional tracker wheel on the left-side of the handlebars, the options are vast. Get a setting that suits your style sorted and reap the rewards. It works so well as a road bike having such rider comforts as cruise control and heated grips, ideal for the journey back from Peterborough to Donington Park early one morning of the following week. This time it was a Ducati day and when I pulled up outside the garage it was like the honey to a swarm of bees as one-by-one riders and even Ducati management started asking questions.

Just like that kid at school, the S1000RR wants to be brilliant at everything, it wants to beat you at everything too – second guessing the road ahead to make your journey that bit more comfortable, for example. It’s certainly eye-catching in the red and black colour combo…

…and then the phone rings. It’s BMW Motorrad UK asking if the can have their Sport model back… uh? Oh, and replace it with the M Package version, phew! It’s +£3000 over the Sport and includes, other than the striking M Sport colour scheme, Riding Modes Pro, M Carbon Wheels, M lightweight battery, M Sport Seat and the M chassis kit reducing weight by 3.5kg. For sure, goodbye my stylish little mate and helloooo to your even racier brother. Good times lay ahead. 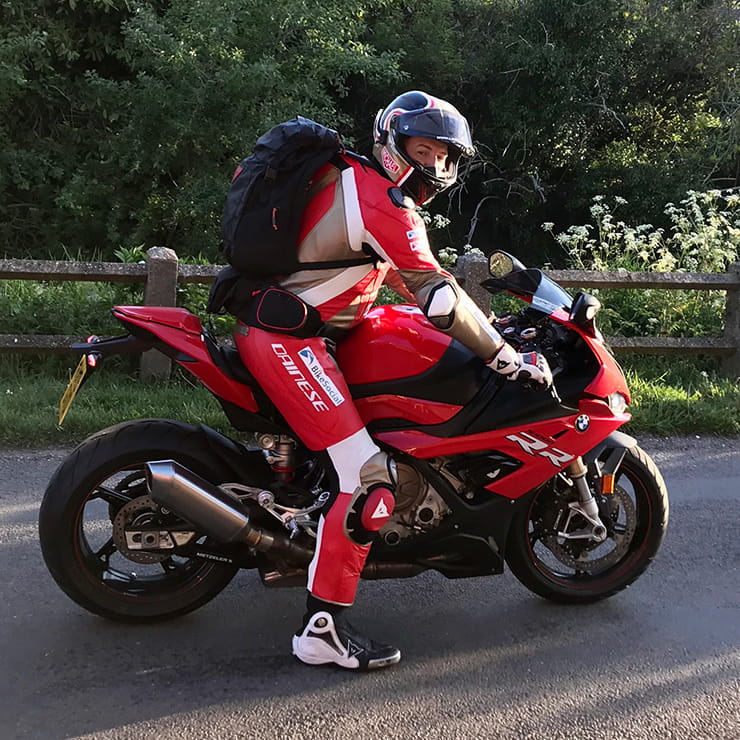 It’s been a while since I rode an S1000RR. This one is a very different and much more advanced machine than the 2010 version I last rode and you’d have to be dead to not appreciate the amount of thought and technical brilliance that goes into making something this fast, this light and this electronically advanced.

Seriously, as BikeSocial’s Mr Mann went through all the options for adjustment with me, I was lost in the hundreds of thousands (literally) of suspension, fuelling, engine braking traction control and abs options. You can even programme the amount of, and volume of backfire produced (BMW calls it ‘accoustic baffle volume’) when you shut the throttle. Yes, really.

Shame then, that when you ride it the whole experience is so entirely soul-less. On paper the 2019 S1000RR wins every game of top trumps you can think of, but on the road it is brilliant but totally unmemorable.

By the time you get to the top of third gear you’re already going too fast to survive. So, instead you shift between third and fourth gear, changing up at 9000rpm or so, barely even bothering the shiftcam system.

The clutch action setting off from rest feels like it has some kind of assistance, but what actually happens is it takes over from your hard-won experience making you kangaroo like a novice. But once moving everything else is pretty much perfect. Smooth power delivery, a slick gearbox and the best quickshifter I’ve ever used make it all-too-easy to find yourself going as fast as you hoped it would. Suspension (electronically controlled and semi-actively responsive) is firm in Dynamic mode, but not uncomfortable and unflappable (literally) at silly speeds on a very bumpy backroad letting the rider keep a light grip on the bars.

The riding position allows plenty of control and shifting position, but is also comfy enough for a sports bike. The seat is a different matter though - arseache sets in within the first hour on a motorway. There’s an awful lot of buzzing vibes too. Plenty of riders complain about BMWs in-line motor being vibey, especially on the S1000XR. I’ve never had problems like this one. The riding position encourages you to make contact with the fuel tank and you can feel it buzzing through your jacket. I thought my phone was ringing in my jacket pocket. There are also finger-numbing tingles through the bars on constant motorway throttle openings.

In the end, it depends what you need from your sports bike. BMW should be applauded for building an engine that can make 200+ bhp at one end of the rev range and still bumble through the Bourne End rush hour at the other. I’d expected Shiftcam to boost the midrange, but what seems to happen is that it has allowed the engine to make the same kind of midrange performance as the old motor, while also giving that extra 10bhp at the top end.

If you’re expecting the new S1000RR to be a throbbing, torquey monster, you’ll be disappointed. But if you want an absolute state of the art, multi programmable, set-it-up-as-you-like 21st century superbike that’ll win this year’s motorcycle Top Trumps game hands down, there’s a lot of sporty goodness here for not that much money by superbike standards.

It’s a great example of what the boffins can do when they put their mind to it, but also a reminder that there’s a lot more to making a great motorcycle than just getting the specs right. Character matters and the S1000RR seems to have sped past the BMW ‘character’ dept in its hurry to visit to the Volkswagen-tribute ‘silly brake light’ building. Just like your mum’s mid-noughties Golf that had those round brake lights with indicators in the middle that you couldn’t see when the brake lights were on, the new S1000 has red rear lights where the indicators should be and the tiny strips of yellow flasher lights are built into these units. They work well until you try braking and indicating at the same time at which point, all the person following can see is bright red with no, er, indication you are turning. 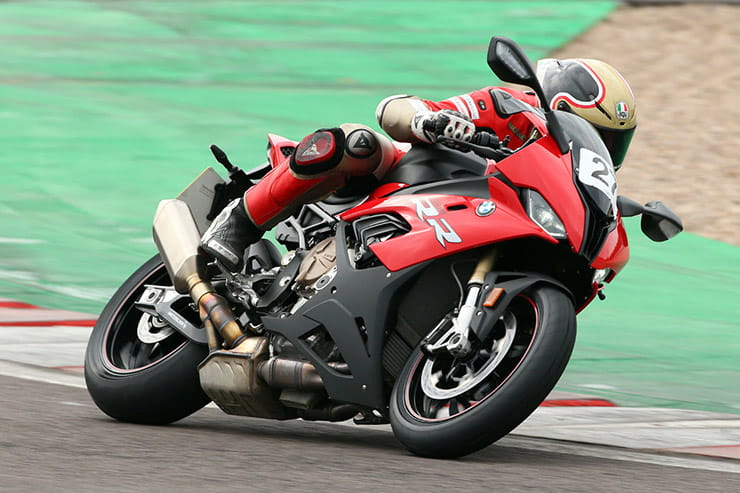