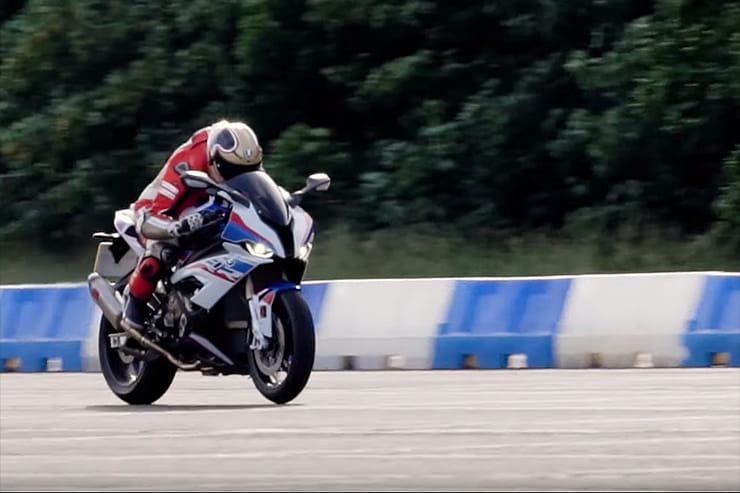 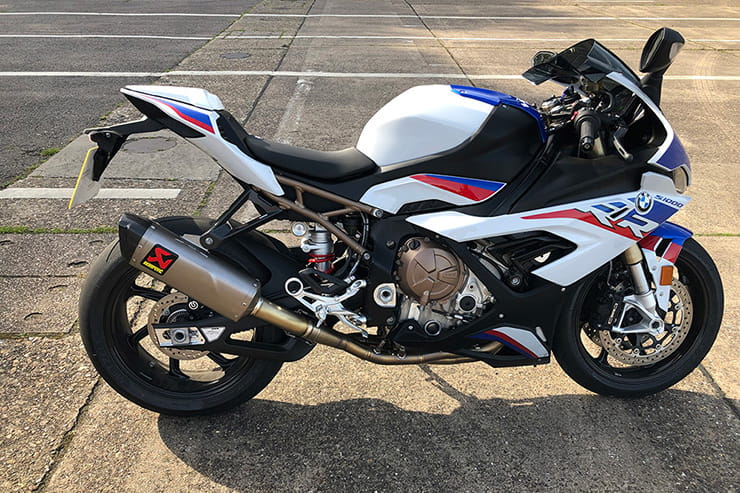 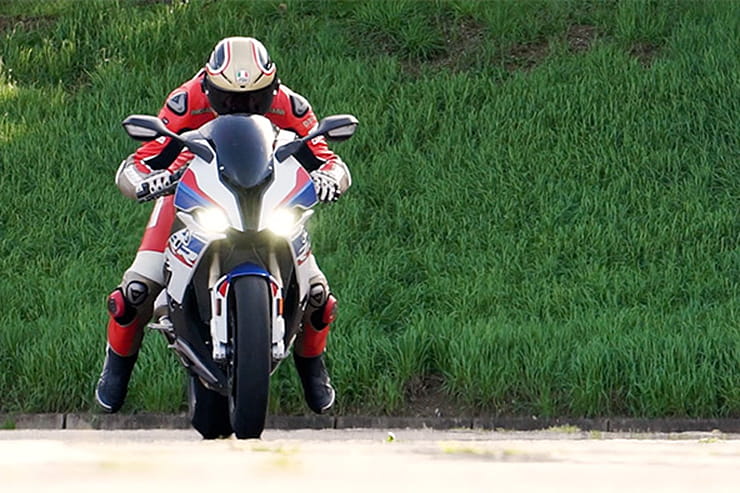 Every motorcycle manufacturer will claim their model upgrades are always faster and lighter than before. It’s hardly revolutionary, I mean no Project Leader will say, “come on lads, let’s make it slower and heavier”.

The same goes for BMW when they introduced the 2019 S1000RR. The third generation was to up the ante so far that even dyno operators have been left a little flummoxed in a cartoon style rubbing of the eyes. Up until recently manufacturers have been claiming power output at the crank or with RAM air as opposed to the rear wheel, after all.

203.8bhp @ 13,500rpm said the Bavarian-based marque when the covers were whipped off at the EICMA show in Milan last November. At the crank or the rear wheel though?

It wasn’t until we took it to RPM Bikes’ dyno that we realised stereotypical German efficiency (and for that, read accuracy) should be trusted. After seven runs, we saw a figure just 0.5% off the claim. And it was at the rear wheel!

It was all part of a performance testing day on our long-term loan BMW which saw us visit the Bruntingthorpe Proving Ground with its two-mile runway and stick a VBOX Sport datalogger on the bike for some acceleration and top speed testing followed by the RPM Bikes dyno run. Then it was off to Performance Parts in Daventry to have a full Stainless Steel Akropovič exhaust system fitted before going back to the Dyno and Bruntingthorpe to check the performance differences.

The wind was in my face at Bruntingthorpe for our morning run with the standard exhaust but thankfully the air temperature was a very reasonable 16 degrees Celsius. After four runs using the BMW Launch Control system, which in theory only permits three uses before a 15-minute cool down period is required for the clutch, the indicated top speed was 183mph according to the beautiful dash, though the datalogger showed just 175.1mph.

Launch Control is a gadget not to be messed with. The bike has to be in Race Pro mode then, while running and in neutral, press and hold the ignition button for a second then a white box appears on the dash with a number indicating the amount of runs remaining before the cool down. When you’ve got 200+bhp and a stack of torque waiting to propel you, with an engine yelling at you while being electronically held at 9,000rpm – your instinct to roll-off the throttle while feeding the clutch takes over, resulting in hampered times. Well, in my case as a non-professional racer, that was my excuse for not matching the claimed 0-60 times from BMW. 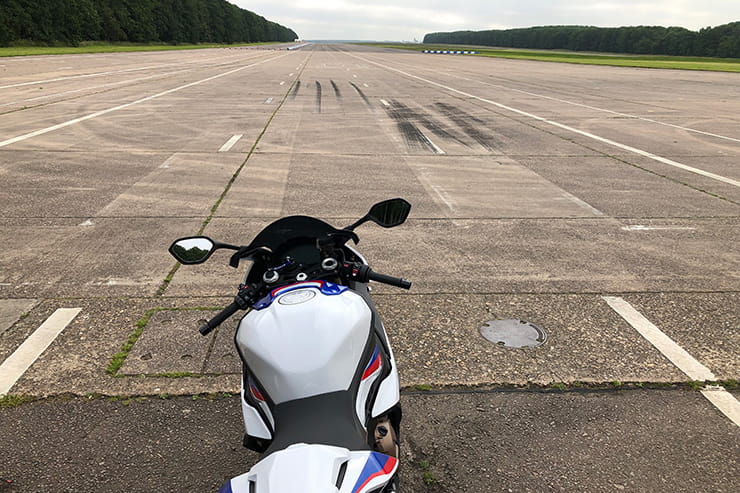 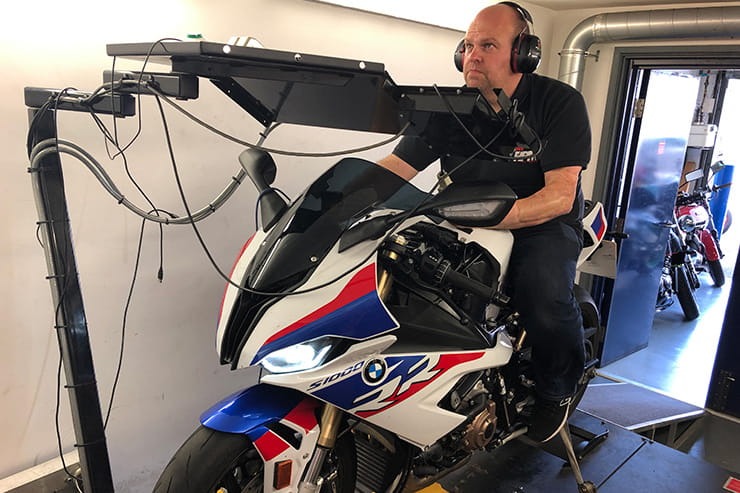 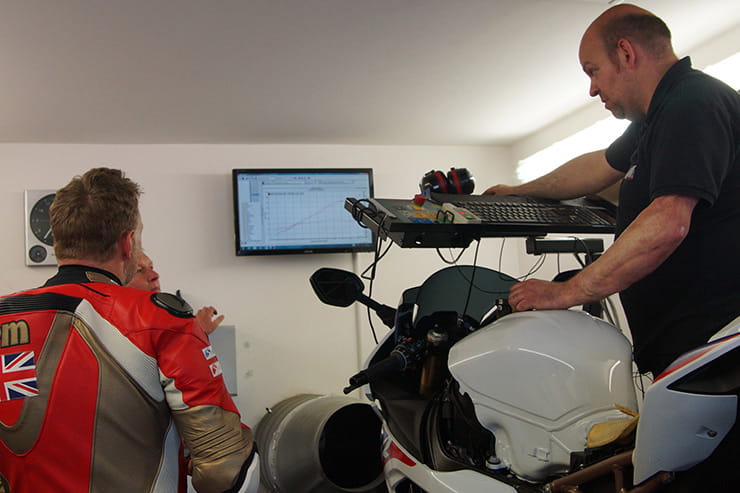 Above: From Bruntingthorpe to the dyno

With no time to waste it was off the RPM Bikes in Northampton for a dyno run… or seven. Because the bike was warmed up already, we could get straight to it. Or so we thought. Connecting the relevant sensors to give accurate power, torque and air:fuel ratio was tricky enough to warrant many panels to be removed although that would help with cooling inside the already warm dyno room.

Dyno runs with power output in mind are run with the bike in 5th gear for any non-race bike that are 1000cc or above to give a broad spread from the low rpm. Anything below a 600cc then it’d be 4th gear. For some of the big twins the runs would probably start at 3000rpm but the four-cylinder BMW started at 2000rpm. Seven runs later to ensure a maximum power and torque output has been reached and the result is phenomenal. 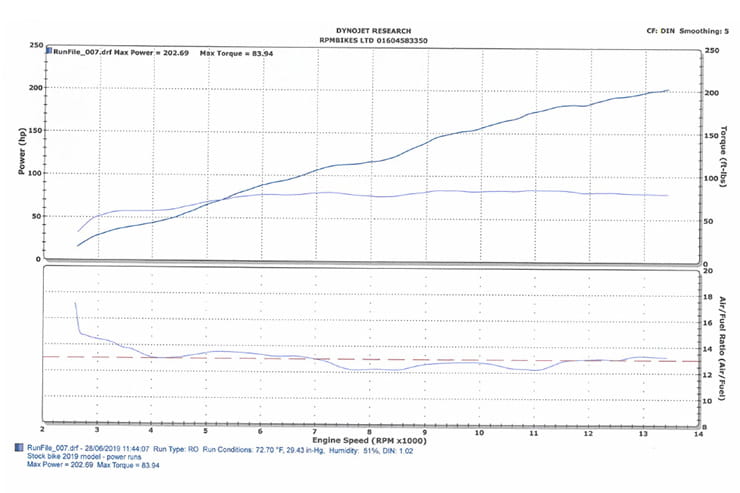 Above: the dyno graph shows the outstanding results

On the dyno, the best run showed 202.7bhp @ 13,500rpm, which is just 1.1bhp shy of BMW’s claimed peak and the difference is no negligible it could simply be down to the air temperature on the day or even the life of the tyre on which is was running.

Torque performance was actually up on the claimed figure. BMW said 83.3lb-ft whereas the dyno showed 83.94lb-ft on the same run where peak bhp was achieved. In fact, on the previous run, the torque figure came out at 84.27ft-lbs. Either way the torque graph showed a very flat line from 7000rpm all the way up. Yet more evidence that the bike, thanks also to its Shiftcam system showing up at 9000rpm, has real pulling strength in the mid-to-high range.

As far as the emissions police are concerned 13.2 is claimed as ‘perfect LAMBDA’, and a dyno run, when it’s connected to the rights parts of the bike, can also show how lean or rich an engine is running. The S1000RR is running a little lean at 5-5000rpm, ideal for a “crisp pull” according to Iain Rhodes of RPM Bikes. It gets richer at about 8000rpm and by 12,000rpm its bang on the money again.

Iain also reiterates the warm weather could easily mean the difference of 1bhp or more where as a tyre could have up to 10bhp worth of difference. “The tyre that we’re using may make a difference, because it’s a Supersport tyre (Metzeler Racetec RR). Whereas on a dyno we tend to run a hard one, I can get 3bhp with a hard tyre. Go onto a slick tyre and you could lose up to 10bhp,” he said. 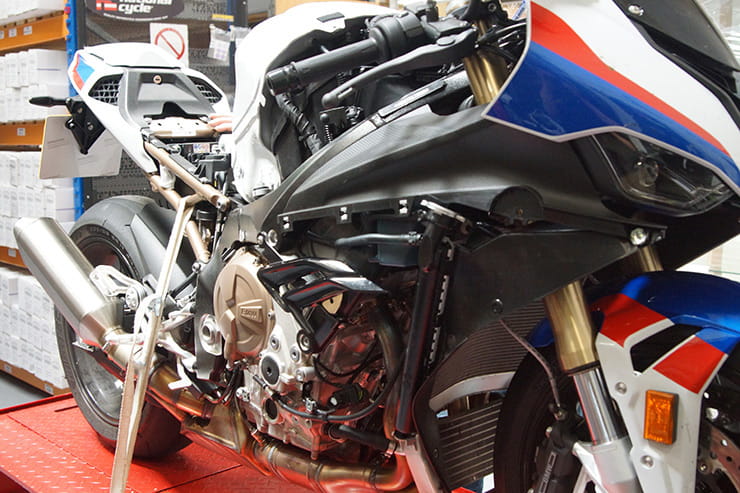 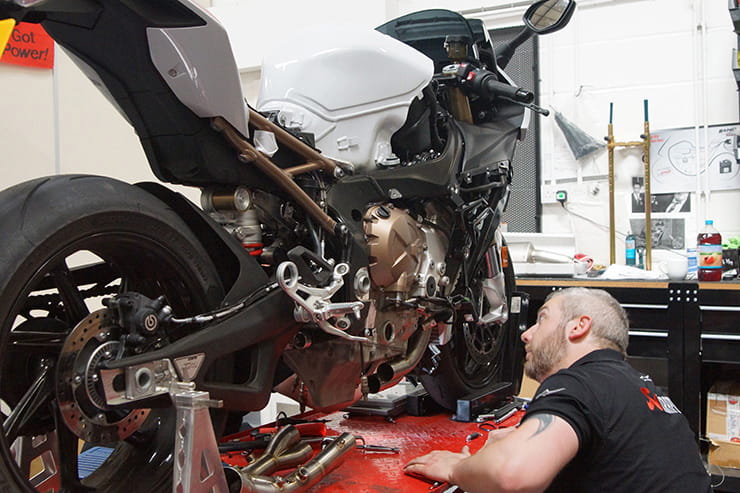 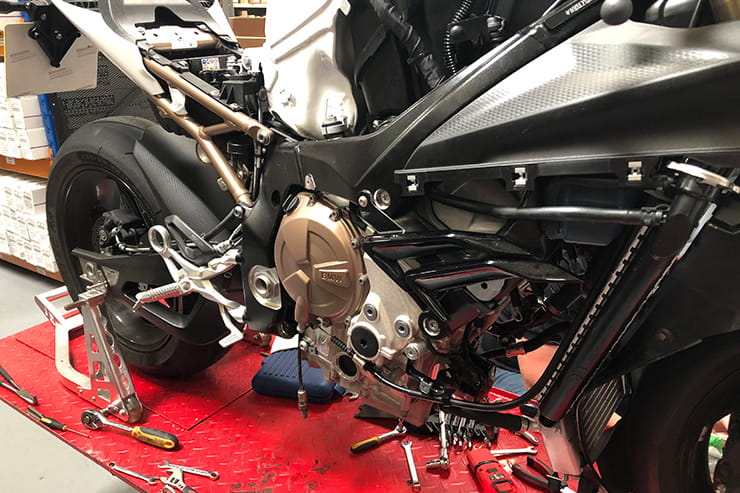 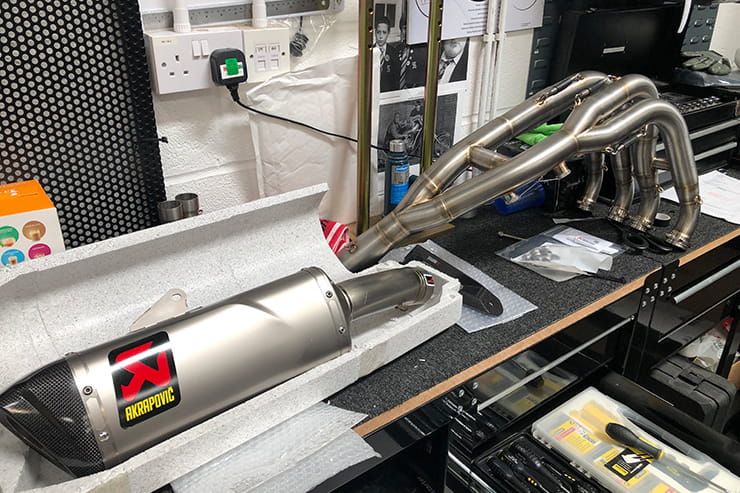 Above: strip tease and the new clothes

The Exhaust and its Results

Performance Parts are the official importer of after-market goodies such as Akropovič, Yoshimura, Rizoma and Remus, and they were more than happy to offer a full stainless steel Akropovič system for the BMW mainly because they’d not fitted one to the new bike before. So the test was as much for their skills and interest as ours.

The full Akropovič system is titanium 4-2-1 system retailing at £1663 inc. VAT and includes the carbon fibre hanger from the pillion foot peg mountings. It offers a 5.1kg weight saving to boot, taking the M Performance kerb weight down to 188.4kg making it over 10kg lighter than any rival.

With the full system fitted and no baffle, back to the RPM Bikes dyno we trundle with results offering some interesting viewing. As you’d expect, the gleaming new exhaust system sounds ferocious, especially when the rear wheel is hurtling along on the roller at the equivalent of 192mph. That was during a ‘power run’ using all the gears to achieve top speed.

While peak power was almost identical, and a small increase in peak torque up from 83.94 lbs-ft to 86.88 lbs-ft, it was the midrange where the extraordinary figures were based: +11 bhp and +6.97 lbs-ft @8500rpm. The new BMW was never found wanting in the mid-range with a scorching amount of grunt already evident with the standard system but an 11 bhp is stunning. The near-on flat torque line from 6000 – 11,000rpm shows how potent this bike is in the mid-range and if you’ve not ridden one yet then do yourself a favour and get it booked.

Adding the baffle in will keep the neighbours and track day police happy and while you’re potentially culling a couple of horsepower, it won’t be noticeable unless you’re Tom Sykes dancing around on a knife’s edge in the World Superbike Championship.

In terms of noise, it’s the official Akropovič website that states the standard exhaust makes 93dB at 5500rpm, while the non-baffled full system is 107.9dB at 5500rpm. That said, I was at a Silverstone track day (more about this next month) which had a drive-by limit of 105dB, and with the baffle in, I was fine. 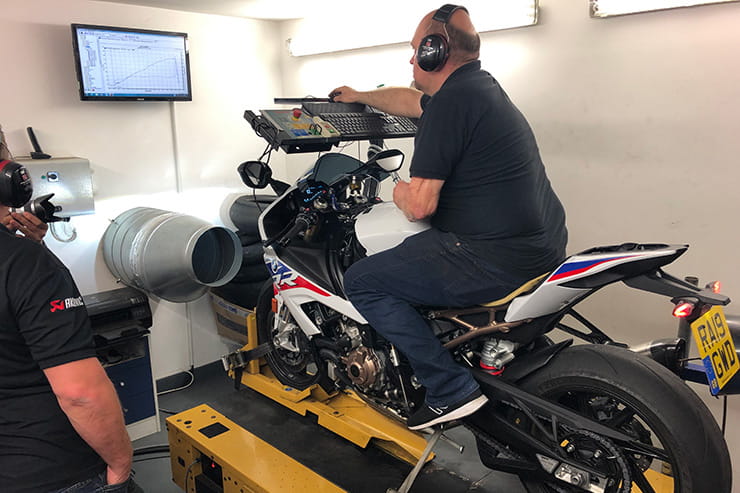 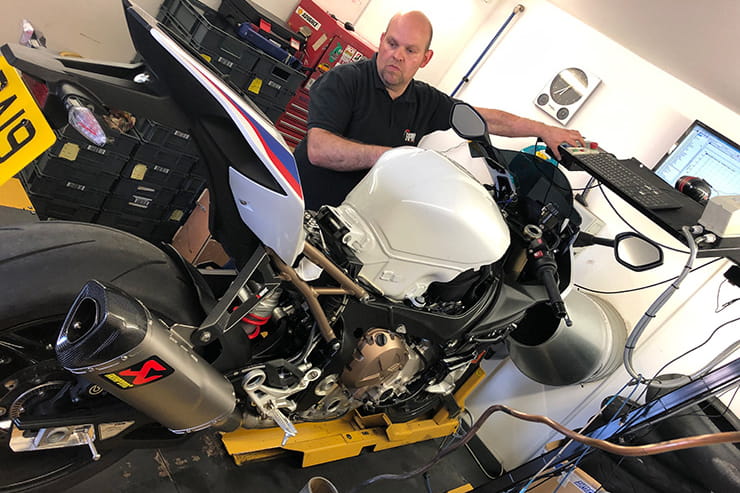 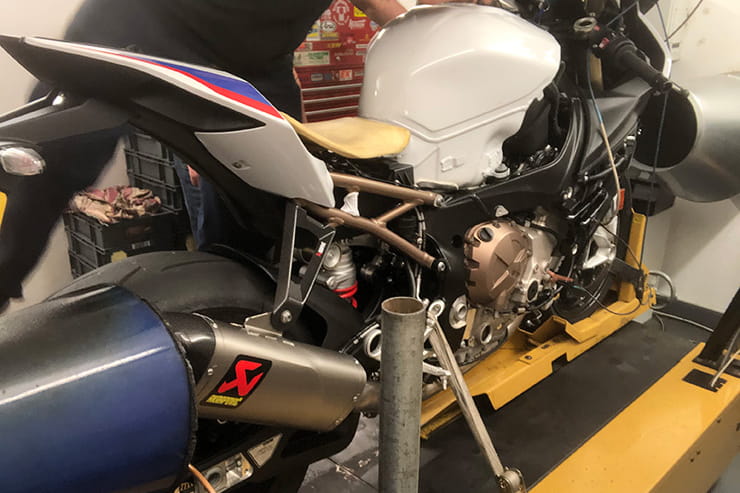 Above: even noisier than before

On the air/fuel mixture affects, RPM’s Iain Rhodes says, “by taking out what we call the blockage (the cat), we’re obviously running slightly leaner at the bottom end of the rpm. As we come up to 8000rpm, it’s running richer because the LAMBDA sensors throw a little bit more fuel in, all the way up to 12,000rpm.”

Interestingly, he also added that the increase in air temperature by around 8 degrees C for the afternoon would decrease the overall bhp output by 1-2bhp.

Back to Bruntingthorpe and with a slight concern the straight through system would see us being thrown off the premises for being too noisy after one run, although at this point is was 6pm on Friday evening which would probably work in our favour. We set the cameras and the bike and boomed off down the runway. The launch to get all that power down in a controlled manner was as tricky as it had been in the morning with the headwind not helping but it was that extra power in the mid-range through to second gear that proved dividends. With a flat-out run the revs rarely drop below 11,000rpm as I keep an ear out for the awesome Akra audio as well as the gearbox popping its way to sixth. The two-mile straight is over before I know it although because it’s a multi-lane runway with and the scenery is more than a stones throw away, the sensation of speed isn’t as mind-numbing as you might expect. 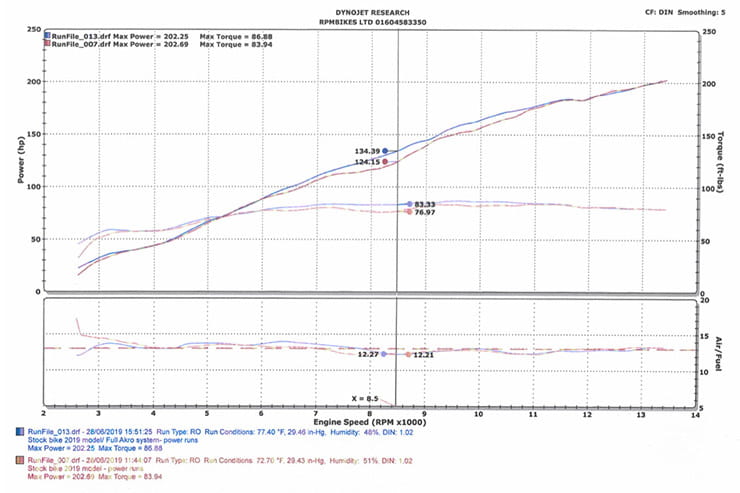 Above: the dyno graph shows standard vs Akropovič

Even though the system was a relatively simple plug-and-play process, with the BMW sorting all the fuelling out courtesy of its near NASA-spec electronics, the Akropovič website recommends ecu mapping “for perfect performance, throttle response and durability, special developed mapping is recommended.” So, guess what we’ll be doing next?