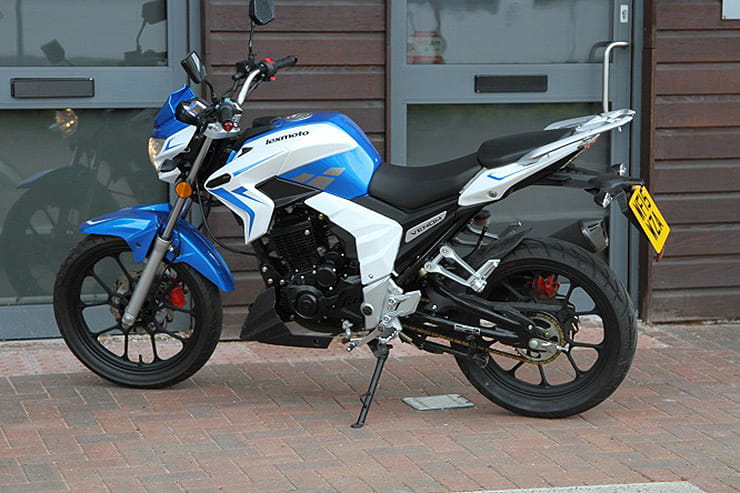 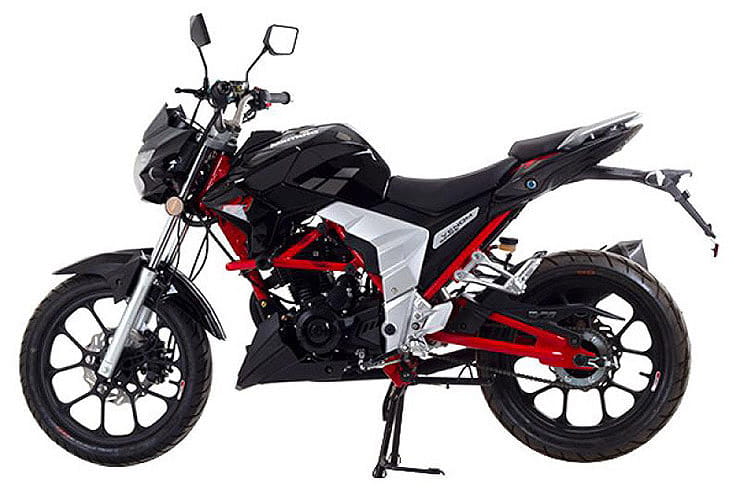 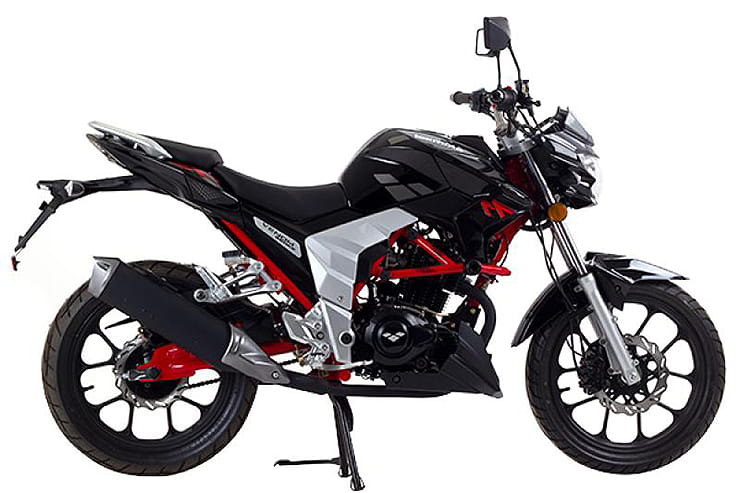 Right, here's a question. How many bikes can you name with a factory-fitted sound system? Ten points each for the Honda Goldwing or Harley ElectraGlide. Mega points and a free drink at the Cat & Fiddle if you spotted the Lexmoto Venom, a Chinese-built 125 which comes with speakers and MP3 compatibility. And all for less than £1800 on the road.

Beyond that attention-grabbing USP, this basic, 125cc roadster was first launched back in 2015 and part of the Lexmoto line up ever since. Like countless other Chinese bikes, it's a simple, basic, geared bike, its SOHC motor based on a time-expired Honda design. With a  five-speed gearbox, tubular steel frame and monoshock rear end, it's about as radical as a Ford Focus-driving estate agent from Tunbridge Wells. But it does have that sound system to differentiate it from all the other cheap 125s out there.

Lexmoto is the Guvnor of this market. It's been around longer than any of the other Chinese importers, outsells all of them and is a regular in the UK overall top ten – in May 2020 it was third, selling more bikes than Kawasaki, Suzuki, Triumph, BMW, Royal Enfield and plenty of others. Two things make up this success story: low prices and big choice. Lexmoto invariably undercuts everyone else and comes up with a string of new models on the basic 125 theme – under the skin, most of these are very similar, but different bodywork, colours and styling help out in the showroom.

That's certainly true of the Venom. It's a flashy little number, with its bright red frame (complete with trellis-like attachment), look-at-me graphics, sculpted plastic and twin-level seat. Alloy wheels, big badging and (on the grey colour option) red calipers back it all up.

So is the Venom worth buying, or is it all window dressing?

At £1799.99, the Venom upholds the Lexmoto tradition by undercutting almost every rival. A Zontes Firefly 125 is £100 cheaper, but everything else costs more. The Sinnis RSX comes in at £2199, but if you want a Japanese brand name you'll pay a lot more – a Honda CB125F has a tag of £2620 and a Suzuki GSX-S125 is almost exactly twice as much as the Venom, albeit with more power and sophistication. It's worth remembering though, that Lexmoto won't hold its price as well as the Honda or Suzuki if you want to sell it a few years on.

In any case, the Lexmoto only weighs 144kg and has typically low gearing so 11.4bhp is enough to give it usefully nippy performance, certainly enough for the urban/suburban roads it'll spend most of its time on. The motor is a willing little thing, buzzing up to an indicated 11,000rpm on the digital rev counter in the two lowest gears. Use those revs, and the bike will sprint up to 50-55mph on the speedo pretty quickly, and cruise at 60-65. If you insist, it will creep up to an indicated 68mph, but won't go any faster, however low you crouch on the tank.

Mind you, the bike will be doing its best to distract. The big analogue speedo and its Lexmoto logo is backlit in blue, very classy. But at high revs this shifts to a racier red and the logo starts flashing, which is amusing the first time round but probably not a good idea on an unlit road at night. 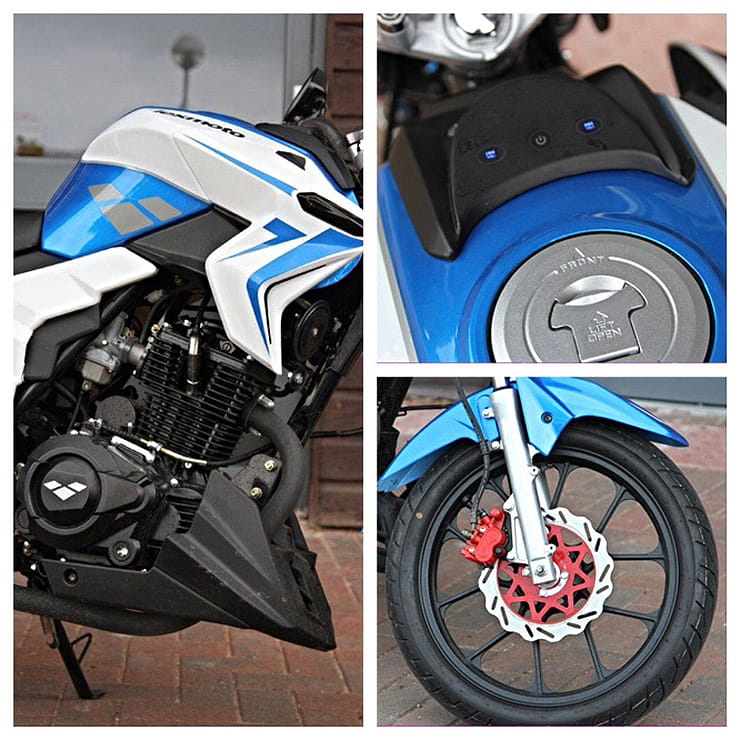 Truth be told, there's not that much difference between the running gear of the various budget 125s.  Just about all of them use air-cooled SOHC engines – made in China but based on far older Japanese designs – though the Venom's motor does have a balance shaft and like all modern 125s, it's fuel-injected.  Gearbox is a five-speeder and the exhaust is a – you guessed it – one-into-one made of ordinary steel, not stainless. This straightforward spec reflects the price.

I didn't have time to measure the Venom's thirst, but experience with other geared 125s of the same performance suggests over 90mpg is typical, with over 100mpg if you try hard. Reckon on 95mpg, and the bike's decent 14-litre tank should give a range of around 280 miles, which is a month's worth of commuting for many.

The Venom's chassis has the same sort of basic spec as the running gear – simple non-adjustable front forks and a rear shock with pre-load adjustment only. Not that this matters a great deal. The little Lexmoto is slim and lightweight, easy to tip into corners, and the CST tyres (110/80 front and 130/70 rear) gripped well in the dry. The front tyre felt a bit odd at low speed, as if it was down on pressure, but this disappeared once we got going. Nothing touched down prematurely and the Venom does have flip-up footpegs (red, if you opt for the black main colour) – but these aren't spring-loaded so flip them up without realising and you'll have flailing feet looking for non-existent support. 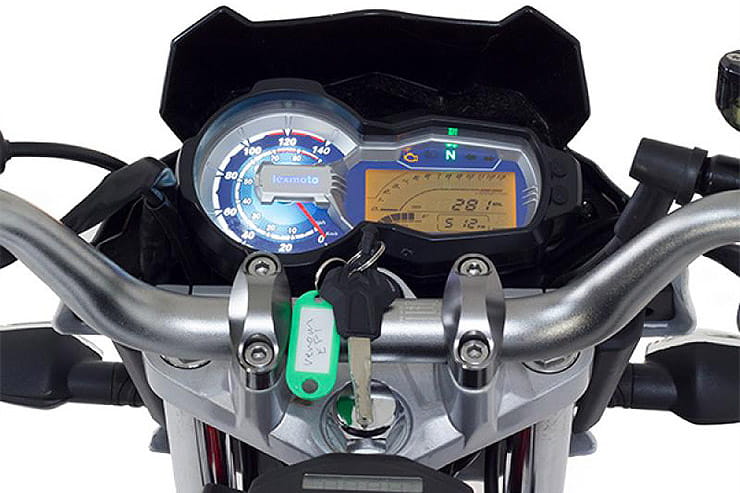 All new 125s without ABS (which, surprise surprise, includes the Venom) now have linked brakes, and the Venom's system is very good. The pedal brings in both front and rear discs, with the lever adding extra bite by bringing in the extra piston on the front caliper. It's all fairly foolproof and doesn't lock up prematurely.

No one buys 125s for their long distance comfort, though I've discovered that some will cover big miles with few ill-effects on the rider. I once rode a Lexmoto from Bristol to Glasgow in a day and could still stand up afterwards – the secret is in sticking to quieter roads and 50mph cruising.

The Venom wouldn't be that good, as the seat is about as comfy as a plank of Ikea stripped pine, while riding into the speedo's red zone brings high frequency vibes through the seat and bars. Still, we come back to the fact that typical 125 riders don't spend that long in the saddle at a time.

Now then, you'll all want to hear about the sound system. It sounds like a gimmick but works pretty well, with twin speakers loud enough to hear music up to 40-45mph in a full-face helmet without distortion. Just remember to turn them down when you're stopped at the lights, or you'll annoy the hell out of the kid in a boom-box Astra in the next lane. Music can be uploaded onto the system, or you plug in your own phone or MP3 on the USB, which also acts as a charge point.

As for rider aids, Venom owners don't get clever power modes, traction control or interactive suspension, but as the whole bike costs less than typical BMW option pack I think that's fair enough. On the other hand, it does have that big colour-shifting speedo and a digital display including tiny rev counter, fuel gauge, clock, tripmeter and gear indicator. 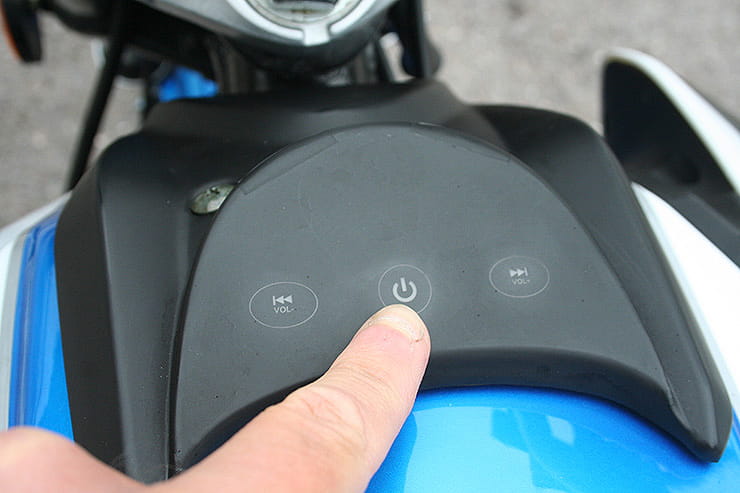 125cc learner bikes might all have a similar spec, but there's plenty of choice out there, it's just (as mentioned above) that most cost more than the Venom. All offer 10-11bhp from a basic SOHC motor with a five-speed gearbox and have twin-disc linked brakes. So often the choice will come down to price and whether there's a good dealer in your neighbourhood. The Zontes Firefly is slightly cheaper (but it's not as flash and doesn't have a sound system), while the Sinnis RSX offers much the same package at £2199 (again, without sound). Honda's CB125F gives the reassurance of that high street brand and the AJS Isaba is more of an individual choice.

What can you say? The Venom isn't a sophisticated 125 and will need looking after if you want some resale value after a few years. But it's good value for money with decent performance, brakes and handling. And what other 125 offers on-bike entertainment? Pump up the volume. 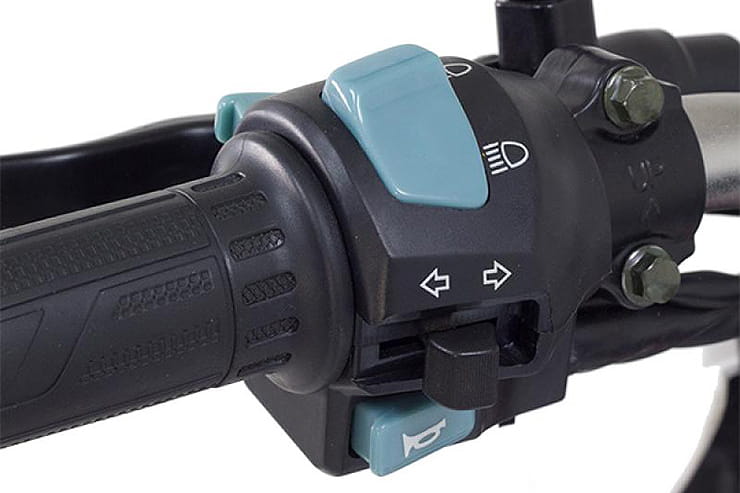 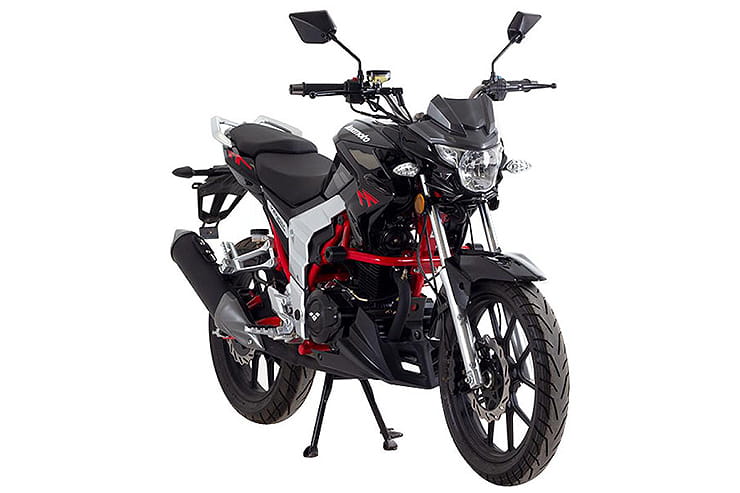