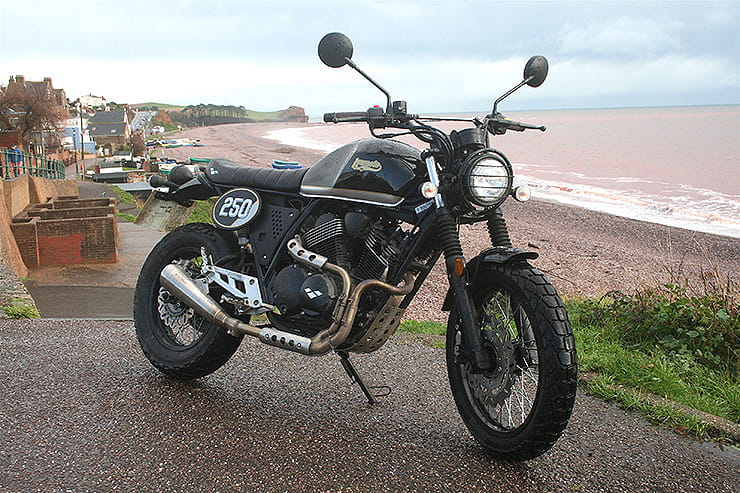 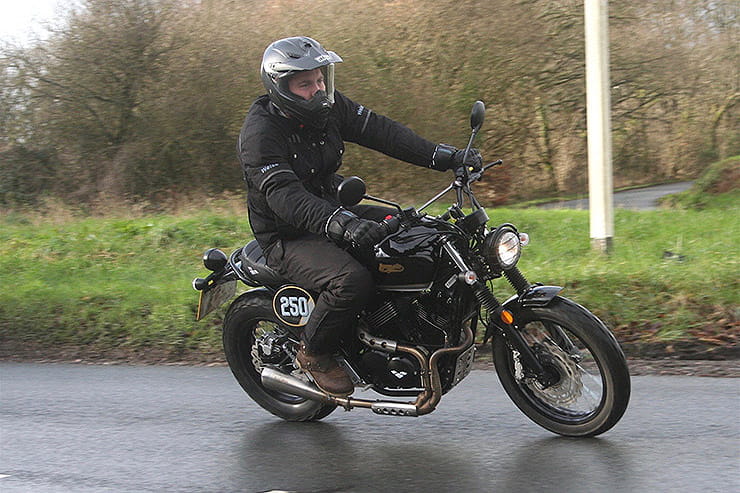 Imagine, just for a second, that you are Lexmoto. You've spent over 15 years importing Chinese 50s and 125s into the UK and made a huge success of it. The bikes and scooters are invariably cheaper than any rival and often outsell them to boot and you've won industry awards and have done a lot to improve the image of Chinese-made bikes in Britain. What you've never done, apart from one brief foray, is tried to move into the 250 market – these sell in tiny numbers compared to 125s, and yours is a volume business, but...

That's what Lexmoto has done, finally launching its first 'big' bikes. As well as the 250cc Vendetta seen here, there's the Pegasus 300 scooter and LXR 380 sports bike. All will probably sell in peanut numbers compared to a top selling 125, but they do give Lexmoto the chance of keeping hold of customers ready to trade up to something bigger.

So, what have we got? Street scrambler styling (as popular among tiddlers as big bikes now) brings the usual chunky tyres, skimpy mudguards, ribbed seat and braced handlebars. It may be getting common, but it's an effective way of making a small bike look street tough. Uniquely among 250s (leaving aside the odd cruiser) the Vendetta is a V-twin, but is that enough to put it ahead of rivals and justify Lexmoto's big bike debut?

In the Lexmoto tradition, the Vendetta is cheaper than any of its rivals, at £2900 (£2899.99, if you insist) making it the cheapest 250 on the market, and closest in price is the Mash Two Fifty, which costs nearly £400 more. The Mutt 250 range starts at £3700 (though they are fettled in Birmingham), or you could save money with a 125cc street scrambler like the Herald Rambler or AJS Tempest. If you've set your heart on the Vendetta but still can't afford the cash up front, Lexmoto's own finance package starts at £57.99 a month. 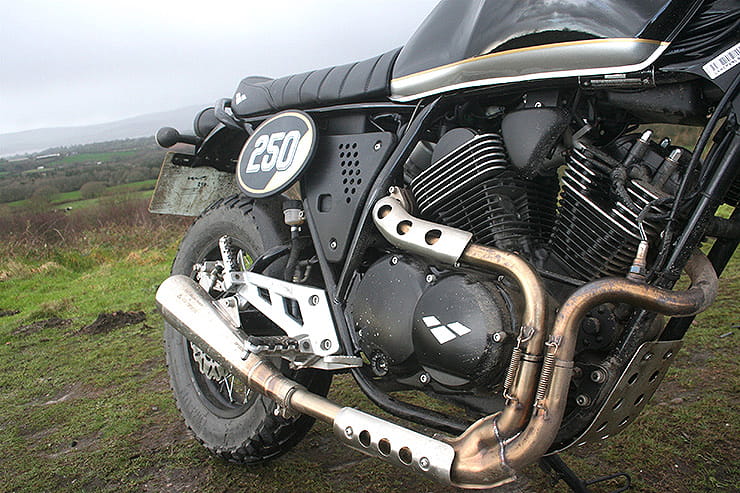 A 250 may have twice the capacity of a 125, but it won't have twice the power, and the Vendetta certainly doesn't, mustering just 16.8bhp at 8500rpm, which is only slightly more than the A1 class maximum. Fortunately, extra cc's usually mean extra torque, and though the Vendetta's peak of 12.5lb ft doesn't sound like much, it is about double that of a typical budget 125.

That plus low gearing (10mph/1000rpm in top) delivers reasonably quick acceleration through the gears. There's no red line, but the V-twin will rev happily round to 9000rpm before a limiter comes in. Do that, and you’ll feel some vibration but it’s background stuff through the bars and rests. It's quite a flexible engine, able to dawdle through town at 20mph in fourth or leaving in top gear on a twisty road, burbling out of corners from less than 3000rpm. But not very quickly – twist the grip at 30mph in fourth and it takes a while for the engine room to get the message.

Still, use the gears and the Vendetta will zip up to an indicated 65-70mph easily, creeping up to seventy-five, then eighty if you've got a tailwind or are keen enough to get your head down – it's fast enough for motorways anyway. If I had a complaint about the engine it's that the fuelling is a bit on/off sudden when coming back on the power, and you can't easily trickle away from the lights at low revs. It's just a fuelling glitch, but the bike would be more pleasant without it.

If the Vendetta's V-twin motor looks vaguely familiar, and you're of a certain age, that's because it's loosely based on the old Yamaha Virago 250. So, it's a simple air-cooled long-stroke unit with two valves and a single overhead cam per cylinder, though now with fuel injection to keep the emissions down. It fires up immediately and settles down to a surprisingly fruity burble from the two-into-one exhaust, which is stainless steel, a nice surprise on such a well-priced bike. The change on the five-speed box is nicely weighted though neutral was sometimes tricky to find while waiting at the lights. 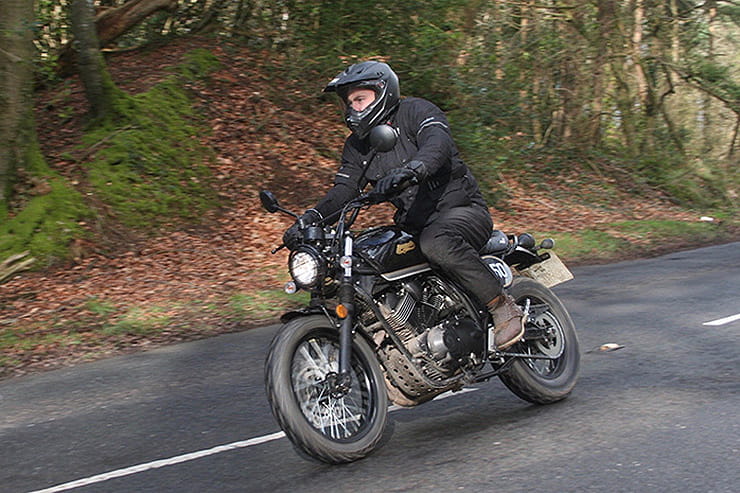 Lexmoto claims 88mpg for the Vendetta, and it didn't do quite that well on our test, but 77mpg is still pretty good over a mix of twisty B roads, 70mph dual-carriageway and town riding. The tank holds a decent 13 litres, so a 200-mile range should be doable, more if you ride gently.

Full on knobbly tyres aren't part of the street scrambler look, but chunky ones are, and the Vendetta's Timsuns fit the bill. I found the bike ever so slightly squirmy when I first got on, though this became less noticeable as the day went on, so maybe it's just something owners will get used to. Otherwise grip was fine. The non-adjustable forks felt firm and well damped, as did the high-mounted monoshock, whose pre-load adjustment looks accessible – hooray! At 151kg ready to ride, the Vendetta isn't exactly a heavyweight – coupled with the slim build and nice steering that makes it great fun on twisty roads, and good engine braking from the V-twin.

Well up to the performance, with decent-sized discs at both ends, along with ABS, which of course is now compulsory on anything bigger than an A1 125. The anti-lock doesn't come in prematurely and both brakes are plenty powerful enough for the bike's performance.

The Vendetta looks like a cafe to cafe sort of bike, but it's comfy enough to ride longer distances on, if you can cope with the arms wide, in-the-wind riding position. The answer to that of course, is to stick to smaller roads and lower speeds – more fun than a motorway any day. The seat isn't too high at 800mm, and with 30in legs I could get one foot flat on the tarmac – and looks a bit short in the length for two-up rides, though pillions do get a substantial grab rail. 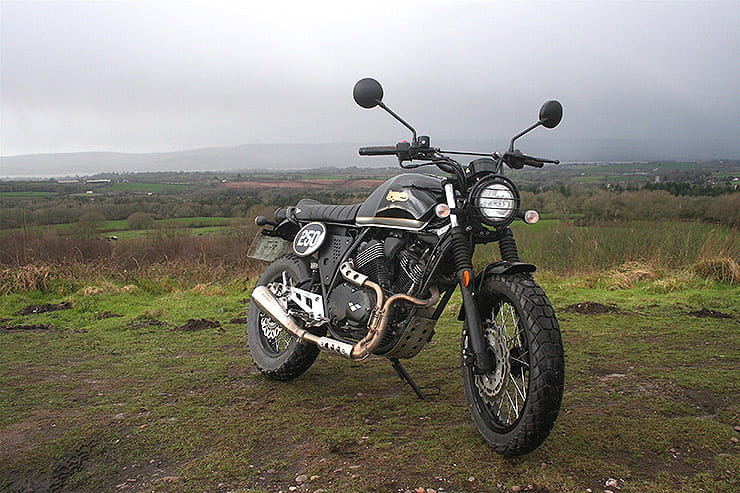 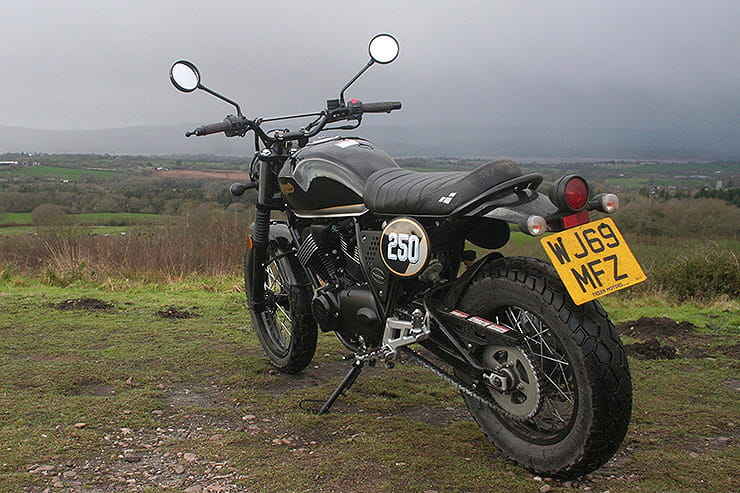 There's not much in the way of gizmos on this bike. Instrumentation is limited to the solo rev counter which incorporates a small digital speedo and fuel gauge. The mirrors blur at speed and they're the cheap sort which don't adjust once they've been bolted tight. I like the LED running lights, and there's a USB charge point, plus all those rough-tough scrambler styling cues like the braced bars, a bashplate and headlight grille. Lexmoto's Lextek arm will no doubt be offering accessories for the Vendetta before long, but not at the time of writing.

Well done Lexmoto. The Vendetta hasn't got the performance of rival 250s like the Herald, Mutt and Mash, but it's not far behind, and the V-twin motor actually gives it extra cache. Add in good looks, decent handling (I got used to the squirmy tyres) and a keen price, and you've got a great alternative to the 250 singles.

Three things I loved about the 2020 Lexmoto Vendetta 250…