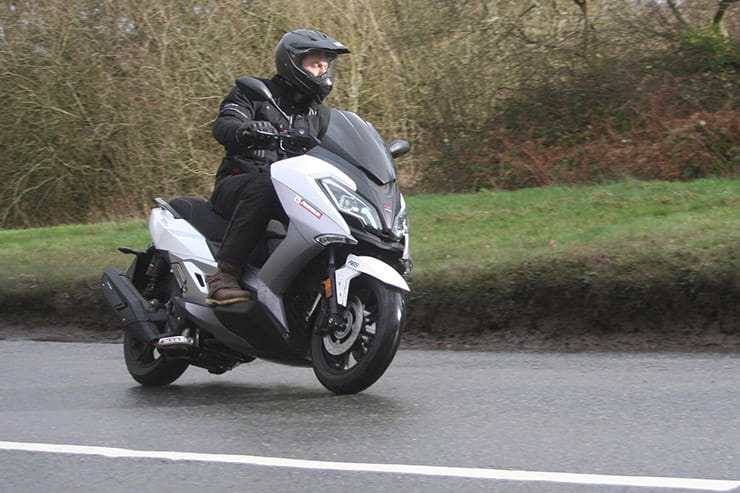 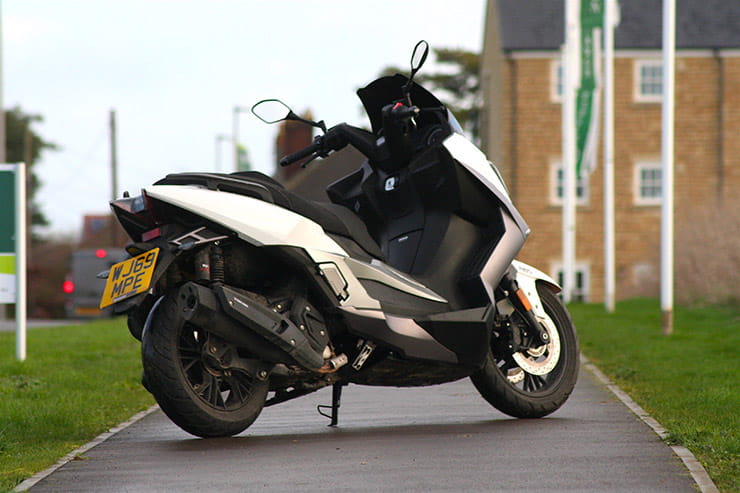 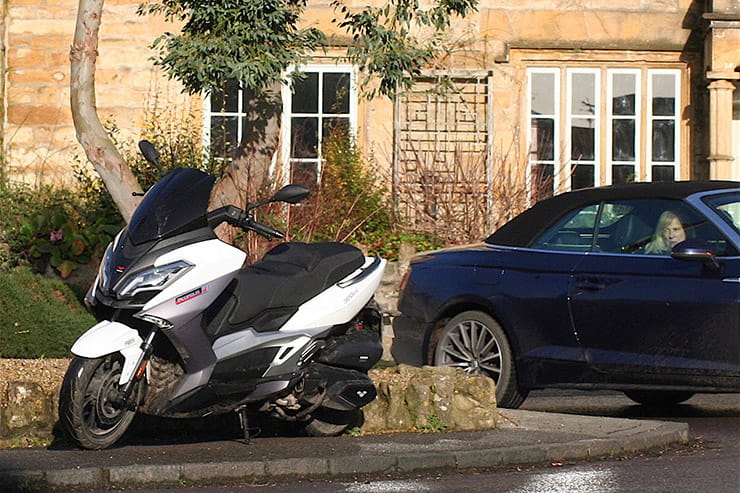 This scooter might look much like any other long wheelbase maxi, but for Lexmoto the 300cc Pegasus is a big deal – it's the first scooter they've ever offered which is bigger than a 125. There's been a logic to this tiddler-only policy. Few would argue that Exeter-based Lexmoto is the most successful importer of Chinese made 50s and 125s, probably the longest lived as well, starting back in 2003.

So why, you might ask, has it taken them 16 years to start selling the big stuff? It's really all down to market size. In Britain, 50cc sales have looked pretty sick in recent years, but we continue to buy oodles of 125s – over 33,000 of them in 2019. Lump together sales of 200s, 250s, 300s and 400s, and they still only amount to a fraction of that – call it just over a third. Break that down further into 300cc maxi-scooters, and we're looking at a bit of a niche market.

In which case (I'm sure you're now asking) why is Lexmoto bothering with it at all? Two reasons. 300 cc scooters might make up a relatively small market, but it's big enough to make money, and Honda, Yamaha, Kymco and Kawasaki all field contenders. Piaggio and Peugeot also offer 300cc tilting trikes, while Yamaha has just launched a 300 version of its tilting Tricity. And for buyers with an A2 licence who have a longer commute, these mid-size scooters make a lot of sense. They're a lot faster than a 125, happy to cruise the motorways at 70mph where the average tiddler would be like a minnow in a shark tank. Bigger and more comfy than the smaller scooters, the 300s are also cheaper to run and insure than the likes of a T-Max or AK550. Finally, for years Lexmoto has seen customers migrate to other makes when they've been ready to upgrade to something bigger. The company is hoping the Pegasus will keep a few of them in the fold.

There's a reason behind Lexmoto's success as an importer – its bikes and scooters are usually cheaper than the opposition. The same is true of the Pegasus, which comes in at £3200 (or if you want to pay for it over five years, £64.20 a month). Closest in price are the Kawasaki J300 and Kymco X-Town, both of which cost another £800, while the Yamaha X-Max and Honda Forza are both north of £5000. 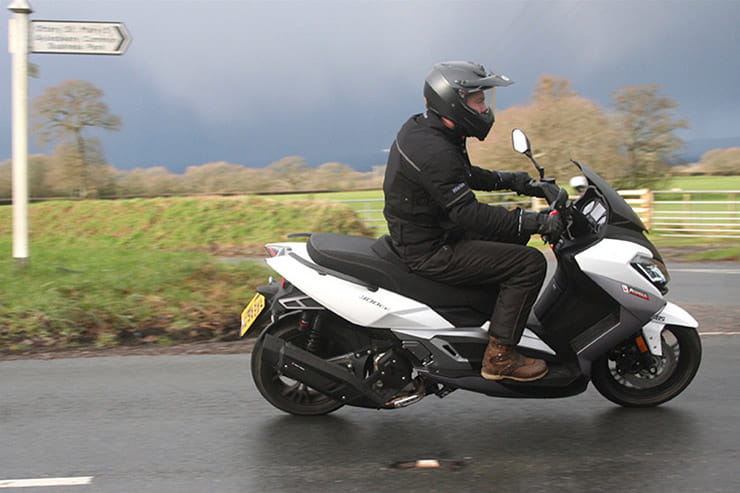 These mid-size scooters are all about easy, clean, convenient transport. The motors don't need to sound good, exhibit a long engineering heritage or be technically radical. Instead, the average 300cc power unit has to be unobtrusive, like an automotive Jeeves the butler.

The Pegasus' liquid-cooled single is certainly that. It fires up instantly and quietly, with efficient fuel injection and engine management giving a seamless warm up. Through town the Jeeves act continues with a smooth motor and transmission, plus more than enough power to cope with urban traffic. This isn't a little 50 or 125, so filtering through smaller gaps takes more care, thanks to the Pegasus' width and longer wheelbase. But it's still possible, the scooter being well balanced at walking pace and easy to trickle along on a whisper of throttle.

So far, a 125 will have done just as good a job, but the point of the 300 becomes obvious once it's out of town. There isn't a huge amount of power, but the CVT makes the most of what there is, the scooter whipping up to an indicated 70mph very easily, with plenty of urge for overtaking. It's fast enough for the outside lane of manic motorways and well within its limits at 65-70. Acceleration is noticeably less sharp two up, especially at higher speeds, but it's still fast enough.

All 300cc scooters have similar power units, simply because there's one type which does the best job. It's typically a liquid-cooled single with single or double overhead cams and, to give a bit more urge at high revs, four valves. The Pegasus is no exception (though according to the manufacturer there's no balance shaft) and averagely competitive on power and torque with 19.5bhp and 17.0lb ft – oddly, these peak at the same 8000rpm. It's mated to the usual scooter twist 'n go V-belt transmission, which is jolly convenient. And the exhaust? Well, just like the motor, it's job isn't to make a statement (aural or visual) but keep everything quiet, which it does – just a pity it's not stainless steel, which would suit the year round riding these scooters are expected to do. 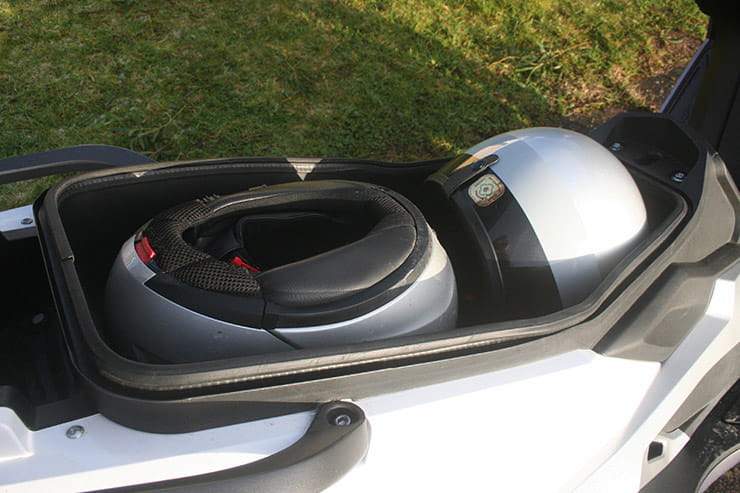 Lexmoto claims 76.3mpg for the Pegasus, and I managed 71.9mpg on a good mix of roads – Exeter city centre, rural B roads for the cornering shots and a mostly dual-carriageway run home at the end of the day, then two-up back next morning. Scooters tend not to have big fuel tanks, because these are fighting for space with the engine, transmission and luggage, but the Peg's 13-litre tank should give a range of around 180 miles.

The Pegasus handles very well. Timsun tyres and Taro shocks might not be household names, but everything does its job and the scooter feels totally secure on corners or at full pelt on a motorway. The forks feel decently well damped and the gas shocks, even on softest pre-load, were happy with solo or two-up loads. No complaints either about the OE tyres, which didn't give any jitters over a couple of damp and muddy winter days.

The brakes are everything they should be. Good-sized twin discs front and one rear, with four-pot calipers at the front and ABS at both ends. Progressive and powerful enough for the performance two-up, they're also not linked, so the rear can be used as a smooth low speed check, which is handy for filtering.

The Peg's seat isn't that high, but it was wide enough to have me on tiptoes, though that's often the way on bigger scoots if you have stumpy 30-inch legs. The good news is that the riding position is neutral and very comfy – I didn't ride more than an hour and a half in one go but the comfort bodes well for longer trips. The pillion seat got top marks for that too. Only two things detracted – one of the usual attractions of long wheelbase maxi-scooters is that you can stretch your legs out, feet forward, but you can't do this on the Pegasus because the bum rest stops you sliding back far enough. Then there's the screen a low, sporty tinted job which looks great but in January directed freezing air at my shoulders. I wouldn't be surprised if a tall screen option comes along.

Now then, luggage. The Pegasus lacks the extra little cubby holes which some scooters have, but by way of recompense offers a generous underseat space, easily big enough for one full-face and one open-face helmet. It doesn't have a light but raises on twin gas struts (very posh) and there's a separate smaller compartment behind the main one, so that your phone and keys don't get lost amongst the shopping. 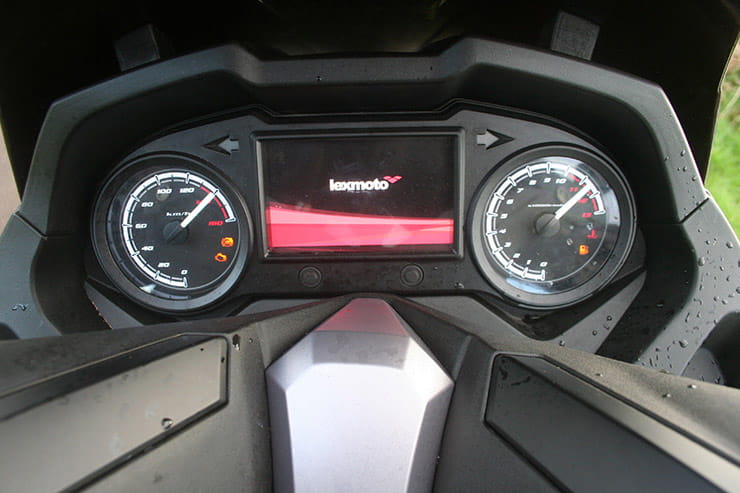 If knowledge is power, then the Pegasus rider is king, because the dash is comprehensive in the extreme. As well as both analogue and digital speedos, there's a rev counter, fuel and temp gauges, voltmeter and all the usual odometers. Flick between three different colours and styles on the digital display – black, white or bluish. But its party piece is nine screens-worth of raw data from the ECU, everything from idling speed to air intake temperature and 150-odd pieces of information in between. Not something the average owner can make head nor tail of, but a good talking point.

Having got past the floor show, there are some good practical aids like a remote switch for the seat and filler cap release, security cover for the ignition switch and big, clear mirrors. No doubt Lextek – Lexmoto's accessory arm – will be listing a taller screen and topbox before too long.

There's nothing really outstanding about the Pegasus, at least in its dynamics. It does everything a maxi-scooter should and is up with the competition on performance, brakes and luggage room – it also seems well put together. As ever with Lexmoto, its biggest selling point is the price – this is by far the cheapest 300cc maxi-scooter you can buy, so it's great value.

Three things I loved about the 2020 Lexmoto Pegasus… 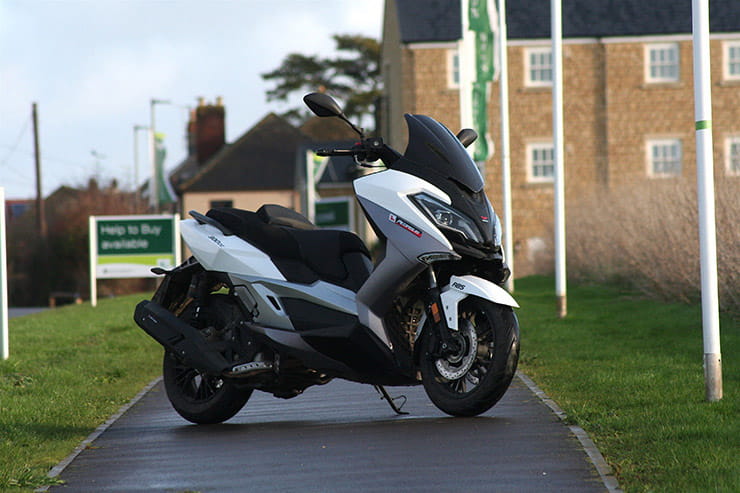