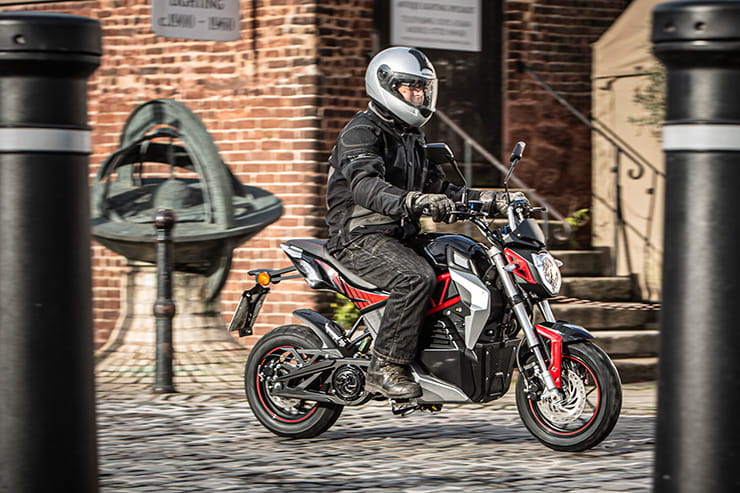 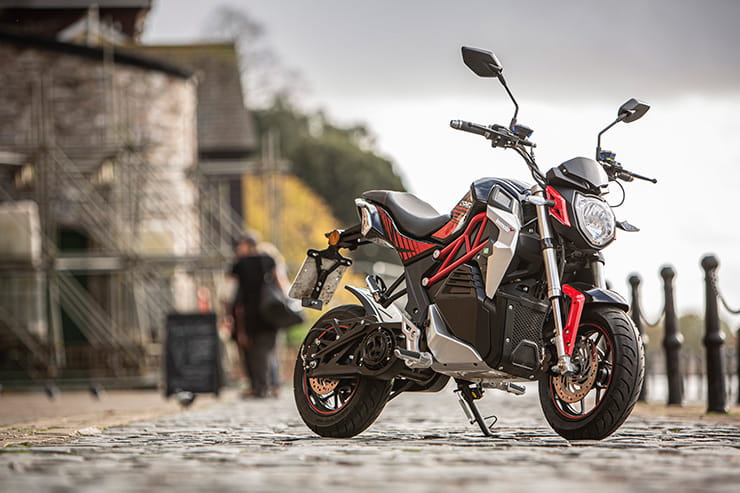 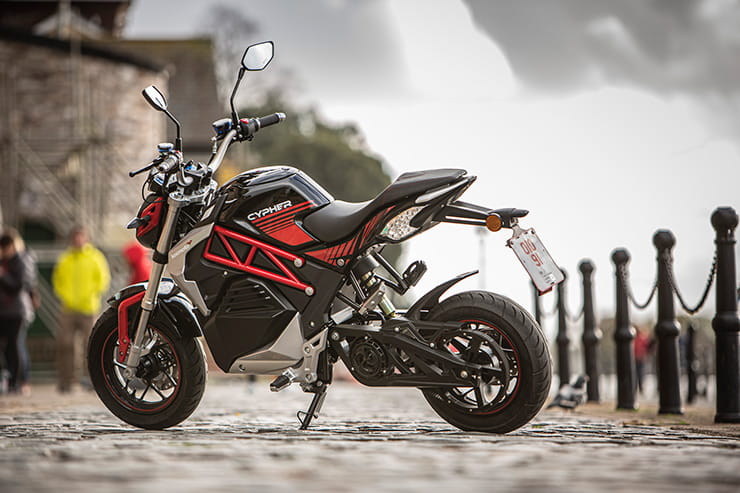 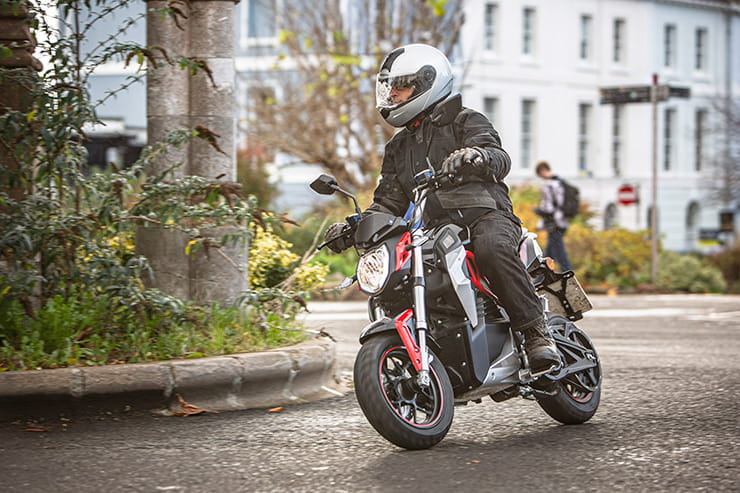 How many motorcycle-style electric mopeds can you name? The clue is 'not many' and if you answered 'two', then you're dead right. The Super Soco pioneered this very niche market three years ago. Basically, a twist and go electric which looks like a miniature motorbike, it's gone on to become the best-selling electric motorcycle in the UK. Well, now it's got some competition. The Cypher is part of Lexmoto's new range of electric two-wheelers, and it's very much a motorcycle, albeit a mini-bike with small wheels. It looks flash, has a removable battery and is a fully legal moped for 16-year-olds.

Lexmoto usually offers keener prices than most rivals, and the Cypher is no exception. After application of the Government's OLEV grant, which knocks 20% off the price, the Cypher comes in at £1849.99, which is over £1000 less than the Super Soco, currently a whisker under £3000. That makes it the cheapest electric motorcycle in Britain. 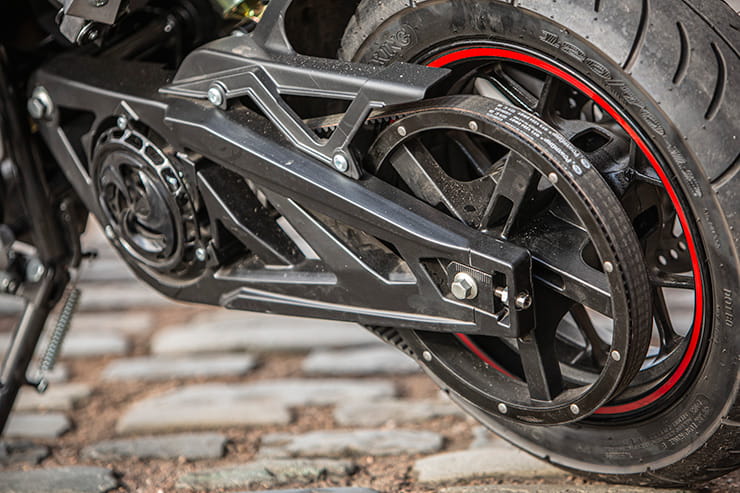 Above: Belt drive is maintenance-free

This is a moped, so power isn't one of its strong points, yet the Cypher is surprisingly quick. The motor musters 1.9Kw (2.5bhp), which isn't much, but as ever with electrics its secret weapon is torque, which peaks at 14.6Nm at very low revs. The Cypher has Eco and Power modes. In Eco, it's quick enough to keep up with urban traffic up to about 20-25mph. Switch to Power (which you can do on the move) and it's seriously nippy – I'd say it's the fastest accelerating restricted moped I've ever ridden. Of course, let's not forget that this is still a moped, so acceleration stops at an indicated 29mph, but at least you get there reasonably quickly. If you need to keep up higher speeds, have a look at the Artisan EVO, which looks very similar to the Cypher but tops out at 50mph and costs £3152. 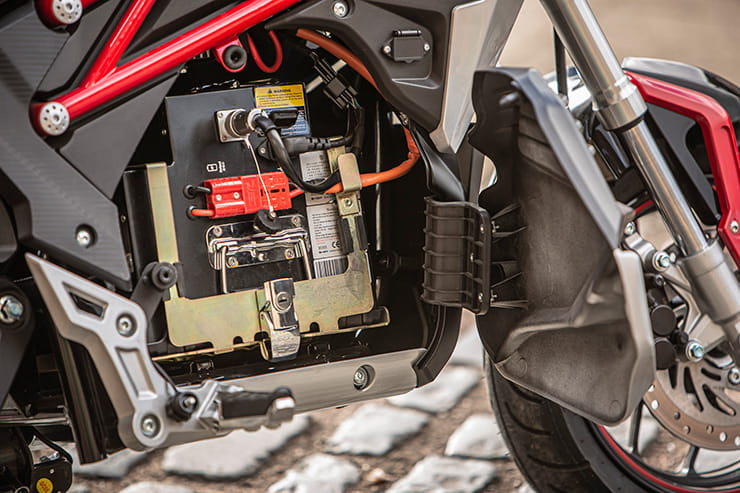 Above: Removable battery can be charged in situ

Claimed range and real range can be worlds apart, depending on the usual host of factors. Headwind, flat-out riding and riders who ate all the pies can depress the figure, and so it proved to be. Lexmoto claims 'up to' 40 miles, but we were heading for a 28-mile range after arriving back at base. The riding was typical moped use, with quite a bit flat-out at 29mph and some stop-start in town. Anyway, this is a round town bike and 28 miles could well be enough for your ride to shops, college or work. The good news is that the lithium-ion battery will charge from any three-pin socket, though a complete flat to full takes about 6 hours. It's also removable for charging indoors and comes with a three-year warranty, extendable to five years.

The Cypher is a tiny bike in the Honda Grom tradition. You sit low, both feet flat on the tarmac, astride a bike that weighs only 84kg. So it's easy to hop on, plus unintimidating and very easy to throw around – the wide bars help, as does a decent steering lock and short wheelbase. Suspension is fairly basic, with non-adjustable USD forks and a monoshock with pre-load adjustment only, plus you've got scooter-sized 12-inch wheels. That all sounds like a recipe for sub-standard handling, but the Cypher acquits itself well. The forks are quite resilient and well damped while the Yanxing tyres didn't cause any problems on a mix of wet and dry tarmac. The rear shock was set up a bit stiff for me, but then it wasn't me who ate all the pies.

The Cypher's brakes are old school – no ABS and not linked (compulsory on 125s, but not mopeds), just a single disc at each end with a four-pot caliper at the front. As you'd expect, they're easily powerful enough for a bike which tops out at 29mph, and have the benefit of a learning curve – novice riders have to learn to balance front and rear brakes on dodgy surfaces, which is no bad thing for future riding skills.

Not really an issue for a 29mph motorcycle which is effectively limited to short hops across town in 30-limits. But the Cypher is still reasonably comfy with an upright riding position, and despite the small size, the footrests are mounted low, so taller riders shouldn't feel too cramped. 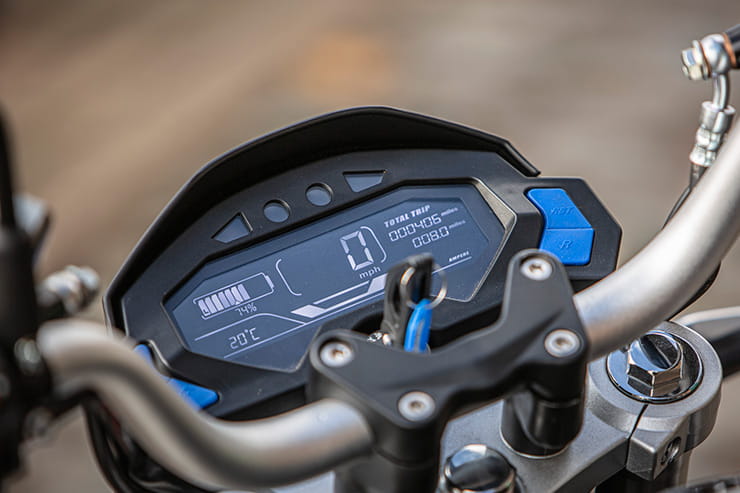 Above: Dash gives all the basic information

Electric or not, the Cypher is a moped built down to a price, so there's precious little in the way of rider aids. The dash is informative, with speedo, battery level, motor temperature, trip and odometer, though it is a bit small. There's also a small lockable storage compartment in the false fuel tank and a (wait for it) a reverse 'gear.' Press the 'R' button and the Cypher creeps backwards – it's a good party trick if nothing else.

If you like flash, then the red and black Cypher has it in spades. In black with red highlights all over the place, it also revels in fakery. The grilles in the false fuel tank, finning on the plastic battery cover and most convincing of all is the bright red trellis 'frame' – which is also plastic. If you don't like flash, the black and blue version is well toned down.

Britain's cheapest electric motorcycle is really a moped, but it's still a useful way of nipping short distances across town, and surprisingly quick away from the lights. Good value and should be cheap to run, though Lexmoto's E-Lex scooter does the same job and is £150 cheaper.