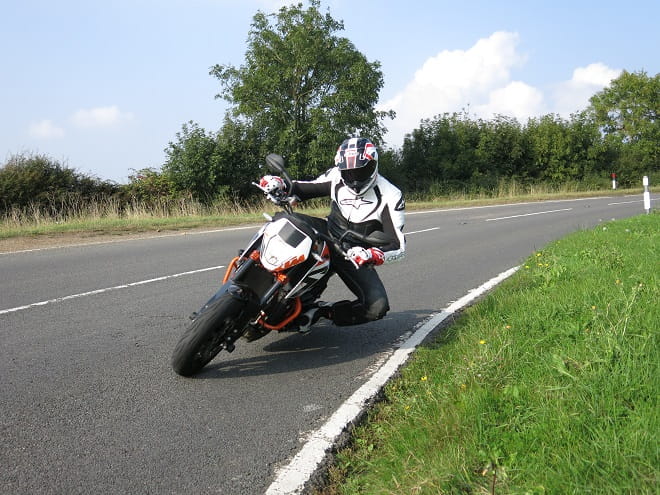 KTM’s 690 Duke R is a hardcore version of the KTM Super Duke 690. At 70bhp it’s the most powerful road bike single-cylinder motor and is an absolute weapon to ride on the road.

I say weapon in a loose term because this is no bucking and weaving powerhouse where you have to fight every pulsating brake horsepower - leave that to its 160bhp-plus 1290 SuperDuke big brother. But what you do get from the A2 learner-licence friendly bike is fantastic handling, incredibly stopping power and a super lightweight package under 150kg.

It means the bike is easy to ride for beginners. Even getting it out of your garage gives you confidence as it’s so light to push around, much lighter than say a Ducati Monster 821 or Yamaha MT-07, for instance. And that light weight equals confidence for new riders at low-speeds, and means its power-to-weight ratio of 0.2Kw per litre comes in nicely into the A2 licence category.

The clutch is superlight, the bars are set in a supermoto riding position, the seat on the Duke R is from the Performance Parts catalogue so it’s more angled forward for a slightly more aggressive riding position than the standard Duke, and the footrests are just where you want them. It’s tall but not offensively so. Newer riders will find it easy to manage at low-speeds, with plenty of steering lock, enough grunt to get away from the line and brakes that are powerful but not grabby. But unless you’re a super rich new rider you’re probably going to be looking at the £???? Cheaper Duke 690, leaving the R for frustrated sports bike riders who are now scared of losing their licence. It may only be a single but the whole riding experience is special on the R, and it looks special too. 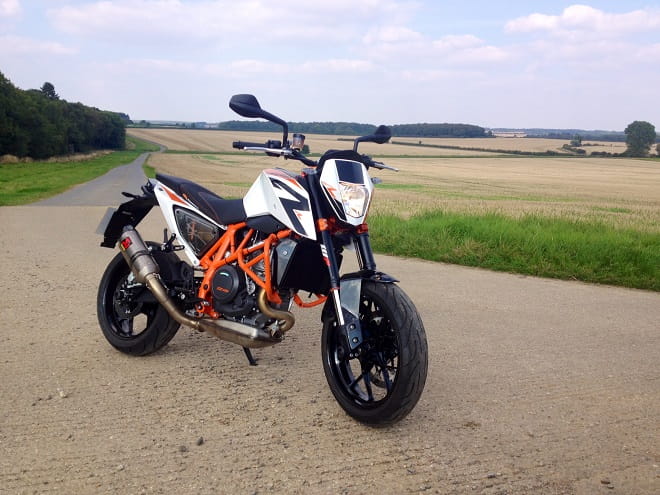 Parts that make the R stand out from the standard bike include the see-through air filter cover, a full Akrapovic exhaust system, fully-adjustable WP suspension front and rear, and lightweight wheels.

The changes make the bike into a back road or cross town weapon. The suspension is firm at the rear, but not overly so, and gives you the confidence to attack. There’s dive from the front forks as the ABS-equipped brakes do their best to scrub the featherweight down to cornering speeds, but all the dive does is add weight to the front end of the bike and give you even more cornering confidence. It turns so quickly and holds a line so well that during our photoshoot on a corner that I’ve ridden round hundreds of times, I found myself dragging my knee through the grass. It put me on a line for the corner that I had never previously discovered, such was its turning in speed. What it makes up for in corners it loses on the straights. Its 70bhp so never fear about getting on the gas early, well not in the dry at least. In the wet I had a couple of cack-handed rear slides, and if it was my bike I’d fit something grippier than the Michelin Pilots on our KTM UK test bike. Nine times out of ten the tyres are great though, but to make the most of that top quality suspension, go grippier.

It won’t rev much past 7000rpm, any more is unnecessary anyway, but there’s a decent but road legal sound from the Akrapovic pipe. It runs out of steam around 100mph, and you don’t want to ride much past 80mph. Ride it faster and its shortcomings start to show, but even at this speed it was returning a decent 48mpg during our test. It’s not exactly comfortable, but I did one 140 mile stint without feeling too uncomfortable. Though when maintaining high-speed on A-roads or motorways you do feel the vibes. Ride it where the young motorcycling gods who build and design KTMs intended, like the twistiest, gnarliest backroad you can find, ideally that’s full of bumps and jumps too, and it covers ground quicker than its 70bhp power should allow.

I absolutely loved my time with the KTM and it definitely gives me the thrills of a much bigger bike, but at more licence-saving speeds. However, I just wish that every road was like the backroad we shot this video and review on, then the KTM really would be taking space up in my garage full-time. 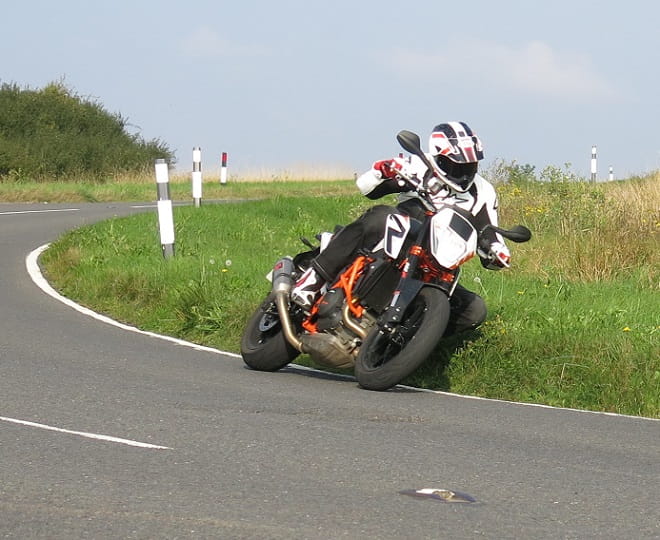 A2 compliant as falls into the prescribed maximum power-to-weight ratio of 0.2 kW/kg.

The finely balanced crank drive of the 690 single-cylinder converts terrific combustion pressure into unrivalled single-power - thanks to its balancer shaft, which eliminates vibration even better than ever without having any detrimental effect on the life of the super-single.

Brembo M50 caliper machined from a solid block of aluminium. ABS can be tuned with as dongle to allow rear wheel slip and front wheel stoppies for ‘Supermoto’ mode.

Machines triple clamps machined to match the flexibility of the front fork.

“I bought one” – KTM’s Social Media and PR manager Luke Brackenbury is a former motorcycle journalist for Bike magazine, and could have bought any KTM in the range. He chose the KTM 690 Duke R for him and his wife to ride, here’s why:

“I’m fortunate enough to have ridden every bike in the KTM range many times and over many miles. It’s my job to know the models and I take it very seriously!

When it came to needing a new bike, it had to fulfil a number of factors; fun, not too fast (I really need my licence), reliable and fuel efficient for regular use. And my wife would also share it.
I’d ridden previous Dukes and the 2012 690 – the fourth incarnation – was the world different to what had come before. I got to spend a lot of saddle time with it in Europe and in the UK. I was really impressed with how light it was, comfortable, plenty of poke, amazing on fuel and a lot of fun. Seriously. Service intervals were greatly increased as well.

My wife, with her relatively new licence, took a spin on it and loved it. The bike is narrow and that accentuates the low(ish) seat height. This combined with the 690 being really light, it gave her a lot of confidence. For a new rider, this is gold.

But I knew that an R version was coming for 2013; better brakes, suspension, looks and whole tonne of Power Part pornography. This would make track days possible to the point of owning Cadwell Park. I was in love. But the bike was a decent chunk more money and the bike was a lot taller and firmer, so thought my wife wouldn’t get on with it. Fortunately the R gave her more confidence and the shiny parts did it for her. Sold!”