It’s not so long ago that the name Super Duke was two-wheeled shorthand for “mad”. The original 2005-model V-twin was a raw naked V-twin with a throttle like a light switch, a tiny fuel tank, thin seat and a reputation for being as impractical as it was entertaining.

What a difference a decade and the addition of the letters GT make. Two years ago, the 1290 Super Duke R took the naked V-twin to a new level of performance and sophistication. Now the 1290 Super Duke GT has arrived to add a touch of Gran Turismo comfort and refinement to the family line. And the good news is that beneath the big fuel tank, comfy seat and clever electronics it’s every bit as barking mad as the original.

That much is clear as I’m caning the GT along a twisty road on the launch in Mallorca, following a trio of riders that includes Jeremy McWilliams, former MotoGP ace and now KTM development rider (among other things). The pace is as hot as you’d imagine, the road surface is cold, damp and slippery, and the Super Duke GT is making it all ridiculously fun despite the conditions. 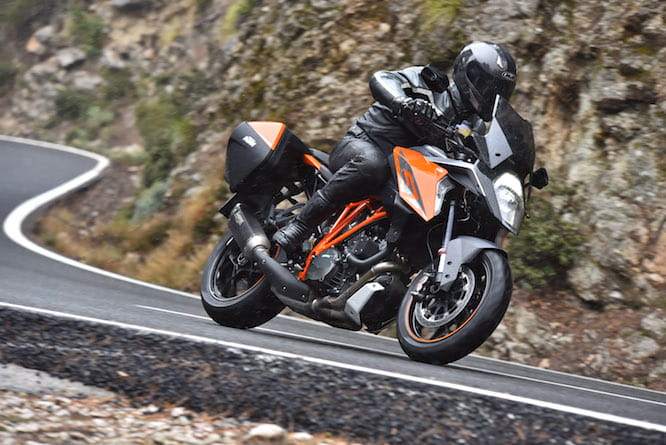 The KTM is thundering out of the tight turns at a phenomenal rate, its ultra-grunty 1301cc motor sending it leaping forward with as little as 5000rpm on the tacho, and its lean-angle-sensitive traction control doing a brilliant job of keeping the rear Pirelli pointing in the right direction.

Then when the bike has demolished the next short straight and another hairpin looms up ahead, the Brembo Monobloc calipers are slowing the Super Duke hard, its cornering ABS waiting in case of trouble on the damp patches, before its comfortable yet well-damped semi-active WP suspension copes effortlessly with the bumps as I crank the light, agile KTM into the turn.

It’s a memorable ride despite the weather, and I can’t think of many bikes that would be remotely as much fun, let alone be able to keep up. Especially as the heated grips are keeping my hands warm, and the instrument panel is showing the big tank still has plenty of fuel although we’ve covered over 100 miles with a far from economical riding style already.

In some ways the Super Duke GT is a combination of two existing KTMs, that super-naked Super Duke R and the 1290 Super Adventure that shook up the dual-purpose class last year with its performance and all-round ability. Its engine shares that duo’s basic engine layout of 1301cc, dohc, eight-valve V-twin with cylinders angled at 75 degrees.

Its combustion chambers are reshaped from those of the Super Duke R, and the GT also gets revised fuel-injection mapping and a new exhaust system that help it get through Euro 4. KTM say it’s even smoother and slightly stronger at low revs, producing 114N.m of torque at just 3250rpm. It makes a maximum of 173bhp at 9500rpm, roughly midway between the R’s 180bhp and the Super Adventure’s 160bhp, and is also fitted with KTM’s first quick-shifter. 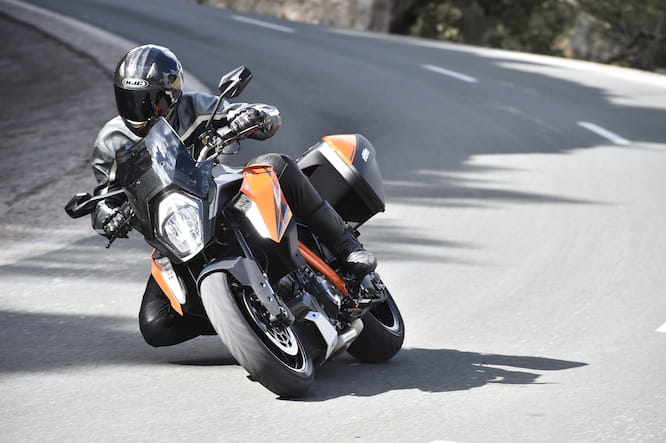 The chassis is also closer to the Super Duke R’s, because the main tubular steel trellis frame and single-sided aluminium swing-arm are identical, as is the basic geometry. Wheels and brakes come from the super-naked V-twin, too, the cast 17-inch rotors wearing Pirelli’s Angel GT rubber, and the front stopper Brembo’s radial Monobloc four-piston calipers.

Where the GT differs is in following the Super Adventure by having semi-active suspension, with WP providing the hardware and Bosch the electronics that make it work. It also has a longer and stronger rear subframe that is built to carry the purpose-designed panniers as well as give room for a larger seat for the pillion, who also gets lower footrests.

The other chassis change involves increasing the fuel tank capacity from 18 to 23 litres, which KTM styling house Kiska has cleverly done by extending it forward and down, to create a sharp shape that houses the indicators and new cornering headlights. Bodywork also includes the new windscreen, which can be adjusted vertically on the move by pushing it forwards, raising or lowering it, then pulling it backwards to lock it in place.

The one-piece handlebar is slightly higher and wider than the Super Duke R’s (and also adjustable by rotating it) but the GT fires up with a similar throaty V-twin grumble, especially when like most of the launch bikes it’s wearing an accessory Akrapovic silencer. And it performs pretty much like the R-model too, ripping up the road with a fantastically broad spread of torque that means there’s smooth, instant acceleration available pretty much whenever you open the throttle. 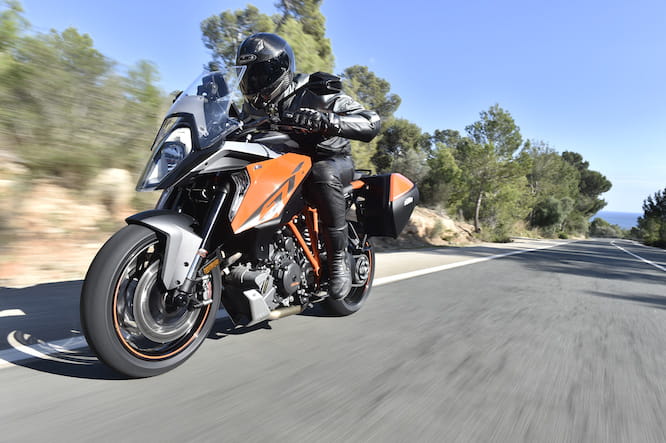 As with the R, there’s a choice of three engine modes (Sport, Street and Rain, the latter cutting max power to 100bhp). And as before the Super Duke is refined and sweet-running in all of them, pulling very cleanly from as low as 3000rpm, and staying very smooth with the help of twin balancer shafts. Even Sport mode is not snatchy or harsh, though the Street’s slightly softer response was useful on some very slippery roads, and when riding through a brief hail storm I was even glad to use the Rain mode, which automatically adjusts the traction control to suit the slippery surface.

In both the main modes there is of course thunderous performance, now further enhanced by the quick-shifter, which smoothed up-changes very efficiently but doesn’t work on down-changes. (KTM say auto-blippers are too harsh on the gearbox.) The GT accelerated out of turns at a phenomenal rate, often lifting its front wheel slightly but rarely shaking its head thanks to the WP steering damper. (You’ll have to turn off the traction control for proper wheelies.)

On a short stretch of motorway the bike was effortlessly smooth and composed, loping long-leggedly along with the screen keeping the wind off my chest. It would certainly be much better for long distances than a super-naked although I was slightly disappointed that the screen is short and its range of adjustment is only about 5cm, so there was a fair bit of turbulence even on its highest setting. And hands are hardly protected so mine got wet and slightly cold despite the very welcome heated grips, which come as standard.

On the motorway it was good to be able to press a couple of buttons and put the suspension into Comfort, the softest of its three modes. The GT retains the Super Duke R’s fairly generous travel (125mm front, 156mm rear) and was fairly compliant and comfortable even in Sport mode, so I left it on that for much of the time, although the other two modes would be useful on a touring trip. Damping control was good, especially in Sport, which – with the help of input from the aforementioned Mr McWilliams – is very close to the R-model’s settings.

It’s perhaps slightly surprising that, as with the Super Adventure, KTM haven’t followed most manufacturers by giving riders the opportunity to fine-tune the suspension within each setting, for example to stiffen up the Sport mode further for track use. Unlike many semi-active systems the suspension doesn’t change with engine mode, which would also be a useful feature. 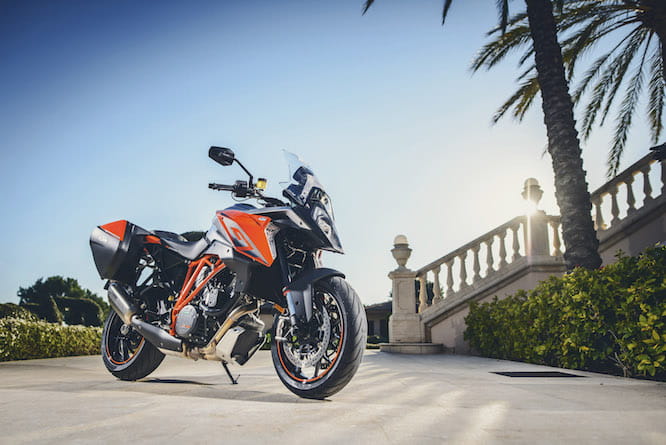 It’s a clever system though, automatically adjusting shock preload to suit load, and adding anti-dive in Street and Comfort settings, but not in the firmer Sport, so the front can dive slightly to quicken the steering. Even in the other setting the KTM steered superbly, its light weight of 205kg dry – roughly 15kg heavier than the Super Duke R – and unchanged geometry helping it change direction with a very light touch on the wide bars.

The suspension was very impressive on the often ultra-slippery hill roads of Mallorca, in combination with its ultra-sophisticated Motorcycle Stability Control system which, as with the big Adventure models, uses Bosch’s six-axis IMU control unit to deliver cutting-edge traction control and cornering ABS. The way the big V-twin stormed out of turns, the TC helping the rear Angel GT retain grip even in the most improbable places, was awesome.

So too was the way the Brembo Monobloc calipers slowed the bike into the hairpins, the ABS occasionally cutting in on the most slippery sections and the cornering anti-lock waiting in the background just in case. The pace that some modern superbikes can be ridden safely in difficult conditions is phenomenal, and the Super Duke GT is right up there with the best in that respect.

It should also prove very capable over long distances, although that powerful engine is thirsty, its launch average of under 35mpg cutting realistic range to not much more than 150 miles despite the bigger tank. More gentle use would give nearer 40mpg and around 180 miles, and the broad seat seemed comfortable enough to encourage serious distance, especially on the launch bikes fitted with the heated comfort seat.

That seat is an accessory but the GT is well equipped as standard, coming with daytime running light, self-cancelling indicators and tyre pressure warning. Its Super Adventure style trio of cornering lights illuminate as the bike leans at 10-, 20- and 30-degree angles. There’s a long list of Power Parts accessories, including neatly shaped panniers that each hold a full-face helmet. 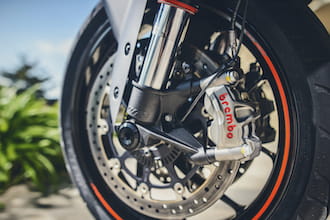 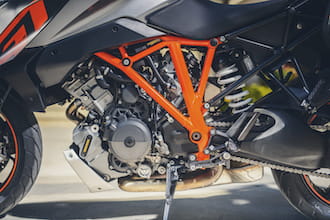 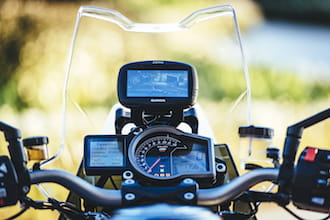 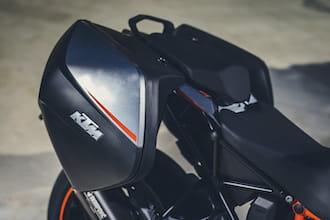 Inevitably the GT’s high standard spec means it’s expensive, though at £15,999 it costs £200 less than the Super Adventure that is in many ways its closest competitor. Even this Super Duke can’t quite match the dual-purpose bike’s long-haul comfort or versatility but it’s not far off, and adds a touch of super-naked aggression that many street focused riders will prefer. The GT is as mad as a Super Duke should be, but at the same time remarkably sensible. That’s a unique and very addictive combination.