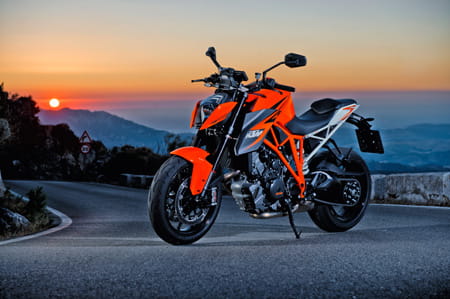 It comes from a family of hooligans, its prototype revelled in the nickname of “The Beast”, and its blend of 180bhp, light weight and slightly raised handlebar sounds like a recipe for slightly crazy fun. But remarkably one of the over-riding impressions after riding KTM’s 1290 Super Duke R is of how polished and refined it feels. 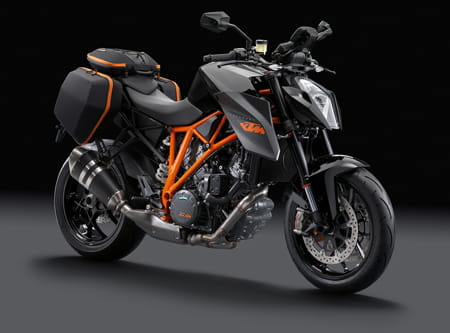 No bike that produces 180bhp, kicks out bucket-loads of torque from below 4000rpm and weighs 189kg without fuel is ever going to be anything less than heart-stoppingly, arm-stretchingly fast. The Super Duke doesn’t disappoint on that score. It rips forward on demand almost regardless of revs, and was still pulling hard at 150mph when I ran out of room at the twisty Ascari circuit in the south of Spain.

But this most powerful Super Duke also brings a new level of refinement to the breed. On the surrounding roads of southern Spain it was improbably well behaved, its smooth, perfectly metred throttle response and sophisticated electronics helping to make what could have been a scary level of performance remarkably accessible and controllable. 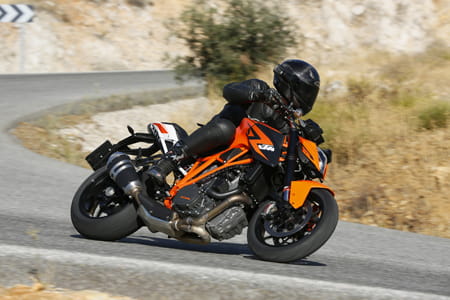 The power comes from a new 1301cc version of KTM’s familiar 75-degree, eight-valve V-twin engine. The Austrian firm’s engineers concentrated on reducing the weight on internal parts to improve response and reduce vibration. And much of their time went on refining the ride-by-wire throttle system to ensure this bike didn’t suffer from the snatchy response that made early Super Dukes difficult to ride. 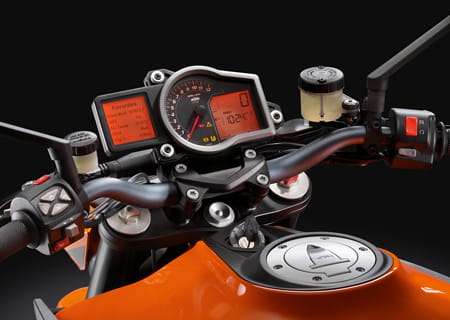 The R-model’s chassis is based on tubular steel frame, this one holding a single-sided swing-arm and with multi-adjustable WP suspension at each end. Styling is unmistakably KTM and related to the single-cylinder Dukes, in either trademark orange or black.

View from the reasonably low seat (835mm) is of an Adventure style digital display with analogue tacho, and a slightly raised one-piece handlebar. There’s a fairly roomy riding position, and a choice of Street, Sport or Rain mode via a press of left thumb. Which ever you opt for, the engine is very smooth for such a big V-twin. 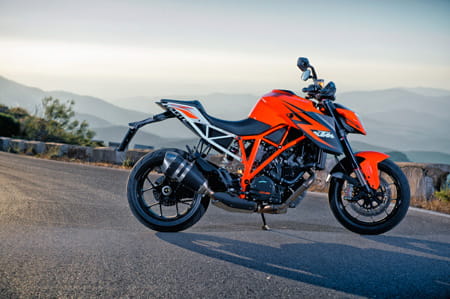 And it’s massively grunty — kicking out more torque all the way from 3000rpm than the 990 Super Duke made at maximum. It’s a brilliant motor, happy to grunt out of corners with four grand on the tacho, rev smoothly to the 9800rpm limit through the sweet-shifting box, or anything in between.

The chassis more than backs it up, too. The frame is stiff enough and the suspension taut and well-damped enough to keep that monster torque under control. Even at knee-dragging angles on the Ascari circuit, the Super Duke combined wide-barred agility with fantastic stability.

There’s some clever electronics to help, too. The traction control works superbly and was occasionally welcome on slippery Spanish roads; the stunningly powerful, Brembo Monobloc equipped front brake is made better still by a very impressive ABS system.

Ironically just about the only thing this brutal yet civilised KTM doesn’t normally do all that well is wheelie, because the traction control incorporates anti-wheelie function designed to maximise acceleration. Then again, with a few thumb-presses you can turn off the TC and unleash the production version of the Beast in all its ferocity.

Perhaps the Super Duke R’s only real drawback, apart from the fact that it won’t stop you getting cold and wet, is that it’s likely to cost £13,999 when it arrives around the New Year. That’s big money for a naked bike but the KTM is a stunningly fast, capable and most of all fun-to-ride machine that justifies the hype that has preceded it. 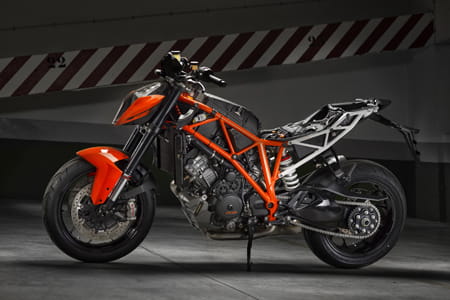