Reborn Indian didn’t need to look far through its history to find a name for a big tourer. The Roadmaster was a luxurious V-twin built from 1947 by the old firm that ceased production in 1953. Now, a year after Indian’s spectacular return, there’s a new Roadmaster with a level of comfort and features that riders of the old model can hardly have imagined. 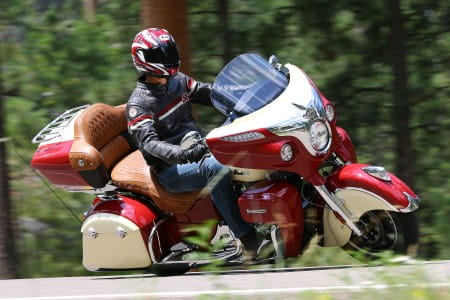 Essentially the Roadmaster is an uprated version of the Chieftain, the most luxurious of the three Chief models on which Indian’s comeback was based. It has the same 1811cc, 49-degree, air/oilcooled V-twin engine, and the same aluminium frame and suspension. It has the same top-half fairing, panniers and traditional big front fender, though the fairing gets a new and brighter multi-LED headlight.

Most of the Roadster’s new features are aimed at increasing long-distance comfort and convenience. It gains fairing lowers, a quickly detachable top-box that’s big enough for two full-face helmets, and a slightly wider, thicker, better padded seat. The electronically adjustable screen is also a bit shorter and wider.

A day spent on the roads of South Dakota, from Sturgis to Mount Rushmore, showed the Roadmaster to be an impressive tourer and a genuine rival for Harley’s Electra Glide. Inevitably it’s a big bike, and a heavy one at 408kg dry, but despite that thicker seat it’s fairly close to the ground (at 673mm), which aids slow-speed manoeuvrability. So does the V-twin’s efficient fuelling and generous low rev torque.

Indian’s Thunder Stroke 111 (its capacity in cubic inches) is a mighty strong motor, effortlessly wafting the big bike along with 80mph or more showing on the chrome-rimmed, white-faced speedo whose digits have been made slightly larger and more legible. There’s also a small LED display with a variety of info, though the Roadmaster doesn’t have a full colour display. 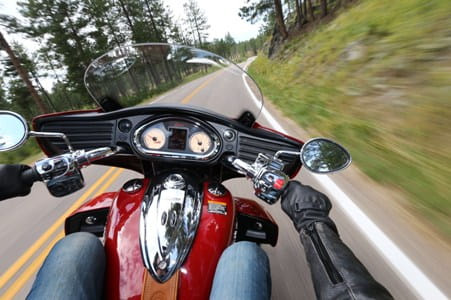 Not that it’s short of features, having an efficient cruise control and a powerful 200W sound system with a USB socket in one of the generously sized panniers. One reason the sound system seemed so good was the excellence of the fairing and especially the adjustable screen, which did such good job of creating a pocket of still air that, when wearing an open-face helmet, the audio was clear at 70mph plus. (Though short riders might find the screen slightly high even on its lowest setting.)

The fairing has some non-lockable storage space in its lowers, as well as two vents on each side that can be opened to give some passing air. That was handy on a scorching Dakota day on which the engine’s heat was noticeable at slow speeds. I didn’t need the ten-way adjustable heated grips or the independently heated rider and pillion seats, but — like the keyless ignition, remote luggage locking and three power sockets — they’ll be worth having. 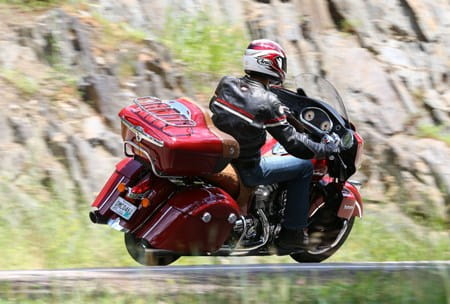 Handling was also well up to standard, thanks to the impressively rigid aluminium frame and competent suspension, which gave good control despite being soft enough for a comfortable ride. For such a big bike the Roadmaster was fun to crank round the twisty roads on the way to Mount Rushmore, and its ABS-equipped brake system pulled it up efficiently too. I was also glad to find I didn’t have to lift my right boot off the generous footboard to use the rear brake, as on some US style tourers.

It’s an indication of the thought and effort that Polaris-owned Indian has put into the Roadmaster that even the pillion gets footboards that are adjustable for height and angle, along with a luxurious backrest built into the gigantic and easily opened top-box. Price is yet to be finalised (the Chieftain is currently £20,499), but Indian’s big tourer looks like a genuine contender.