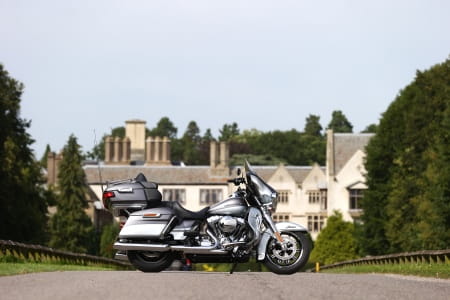 Here is a message for small furry animals living in roadside hedges.

You are safe. Stand down to Defcon Five.

You see, there was a time when the rider of a large Harley would steam into a bend too fast, apply the front brake and sit there helplessly as half a ton of man and machine ploughed straight on into the undergrowth, rendering homeless several families of innocent voles, mice and shrews.

Not any more. For not only do the uprated front discs on the new Electra Glide actually work, they’ve been linked to the back brakes so that you can now shed speed with aplomb.

And gain it as well, with a more powerful engine which is, for the first time on a Harley tourer, partially water-cooled.

For a company that’s been producing variations on the same motorbike since, er, 1903, that’s as big a shock as suddenly finding your granny playing with an iPad, but with competitors like Victory and Indian pressing on Harley’s heels, change was needed.

What Harley did was spend the past four years talking to customers about what they wanted, and the result is 100 changes on the Glide, although you’d be hard pushed to notice all of them.

The most significant are those ABS brakes, which combined with stiffer and chunkier front forks, mean that even slamming on the front anchors while steaming into a corner results, not in the bike nose-diving, squirming and understeering as it once did, but just squatting nicely, shooting its cuffs and soaring through the bend with stability and panache.

The engine now has not only seven per cent more power, but more torque at low revs, giving a creamy spread of grunt all the way from 2,000rpm to the redline at 5,500, although it’s most frisky between four and five grand for effortless overtaking.

A new hydraulic clutch makes for not only slicker gear changes, but much better low-speed handling; always welcome on a beast weighing in at 391kg.

Other nice details are one-touch operation for everything from the panniers to a sat nav and Harmon Kardon entertainment system so good that you may well want to consider selling your house and living in the top box.

Particularly since it’s now larger, but thanks to clever redesign, and possibly a sprinkling of magic Tardis dust, looks smaller.

Apart from a fairing here and a fender there, the styling remains the same, since Harley owners said they liked it just as it is, down to the batwing fairing which dates back to 1969, although it now comes with a clever vent that directs air over the helmet of even taller riders to prevent buffeting.

And another thing that hasn’t changed, and hopefully never will, is that gloriously syncopated soundtrack of a big V-twin.

The only difference now is that rather than it striking terror into the hearts of Mr and Mrs Vole, now they just roll over and go back to sleep.