Honda’s uber-practical, mid-capacity, super frugal mini adventure-tourer, the NC750X, has been treated to a grown-up and Euro 4 compliant facelift for 2016. It comes with some smart new technology tweaks too.

Since its launch in 2012, as the NC700, it hasn’t been the super sexy, poster bike that adorns teenagers’ bedroom walls but the Japanese firm has sold 33,000 of them in that time and it was Honda’s best-selling ‘big motorcycle’ in Europe in 2015.

The bike’s popularity stems from having a handy combination of decent performance, particularly mid-range torque and its quirky storage solution where the traditional area reserved for a fuel tank is replaced with a large and lockable void. Add into the mix its reliability, build quality, ease to ride and mega economy – with figures of 80+mpg on the cards with a tank range in excess of 250 miles from the 14.1 litre tank. Oh, and it comes with quite an attractive price point too.

In 2014 the original model was revised gaining an extra 6 extra horse power and capacity was increased to 745cc. This time around, Honda haven’t worried about amending the liquid-cooled, parallel twin power plant and its 54bhp at 6250rpm. It remains housed in a low position in the frame giving the tall bike a lower centre of gravity, handy for stability, agility and cornering. Not something you’d initially expect the NC750X to rank highly on if you’ve not ridden it but more about that later. 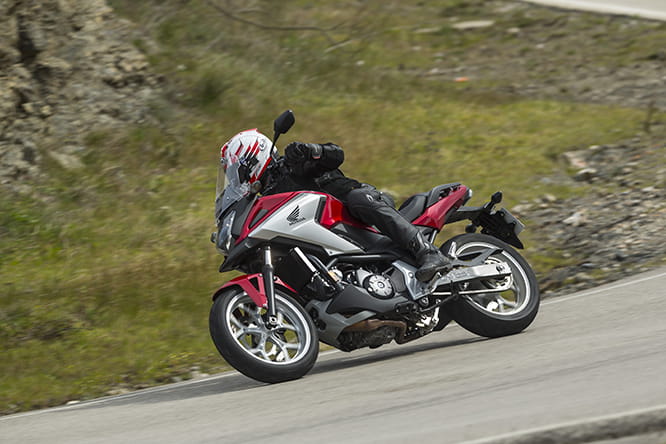 What’s new? Well, Honda have concentrated their redesign on an ethos of “strong new design and improved performance features” in the form of one of the best phrases I’ve ever read in a press release; ‘Sensual Performance’ – any ideas? No, me either!

Sensual or not, here is what’s been given the treatment:

A new three level S-mode offers the rider more flexibility whether riding in town or blasting around country lanes.

The NC750X has a much more modern and grown-up look similar to its adventure-esque siblings such as the incredible new-generation Africa Twin.

Another update that gives the Honda a modern look. I’ve not tested their night-time ability but am assured they aid visibility more than the outgoing model.

Shorter, lighter, Euro 4 compliant side-sweeping muffler which even sounds much better than before.

The 41mm front forks are equipped with Showa’s never-seen-before dual bending valves, which essentially improve oil flow through the suspension.

While at the rear, the monoshock is now adjustable through 7 settings for preload, ideal if you’re carrying luggage or a pillion.

More design upgrades on both the front and rear single brake discs.

An effective new screen which also feels sturdy and well-attached, not flimsy and flexible like some, although isn’t adjustable.

Smoother off the line and through the ‘box though not between first and second at low speed in town. The upper rpm limit has been raised for downshifting in manual mode.

Volume of the space available in the are usually reservd for fuel tanks is up by 1 litre to 22 litres. I could get my Arai RX-7V in there easily.

Bigger and brighter new LCD dashboard now comes with an array of rev range related colours – looking like the kind of lighting used at your school disco back in the day. Honda say it’s supposed to “keep you informed of the bike's performance with the use of intuitive colour-coded lights” but you’ll do well to remember what each colour means let alone relying on them to remind you of how fast you’re going! Pretty though. 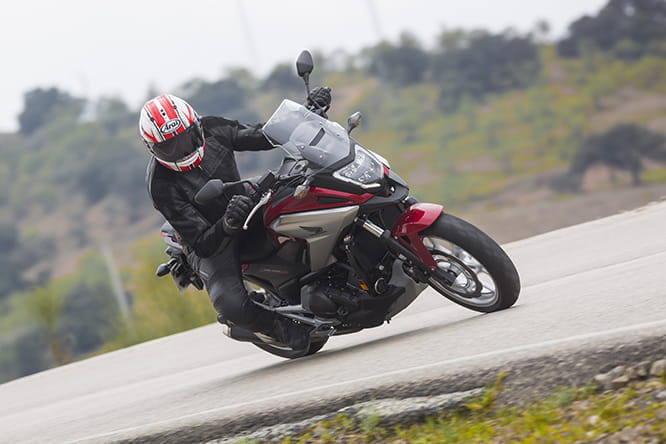 On the bike and you get a sense of comfort straight away. A narrow-ish waist at the front of the seat makes the 830mm height accessible for shorter riders, while the footpegs are positioned high enough not to concern anyone other than Mr. Marquez about scraping the hero blobs. It also means the riding position and relationship between the raised handlebar, seat and pegs plus the comfort of the seat, quality of the suspension and new screen makes the NC750X a very good motorcycle to put the miles in without needing to stretch. In theory the tank range should be good enough for 250 miles and I reckon you could manage that in one sitting. Now, there’s a challenge.

I wouldn’t usually describe a motorcycle’s performance as Sensual, and the NC750X’s is nowhere near scary but that’s not the idea or design intention of Honda’s entry level adventure bike. The throb of the 270-degree crankshaft is hearty and strong, similar to a V-twin in a way and gives reassurance of the build quality one expects from Honda. It’s even a smart looking engine; clean, neat and tidily arranged.

Throttle response on the DCT-equipped bikes that were afforded to journalists at the press launch in Malaga, Spain, isn’t the sharpest. Off the line the bike is certainly smooth with as much or as little throttle applied as required. Unlike automatic cars, the bike doesn’t edge forwards when engaged in Drive, Sport or first gear in manual ‘MT’ mode. There’s no jolt of the engine engaging or rocking/pitching of the suspension as you move off or change gear. However, it is a little sluggish. 54bhp from a bike weighing 238kg, more than an Africa Twin by the way, isn’t going to blow your socks off and hauling the thing away from the lights feels like a struggle to climb the first few revs quickly. However, the wait to test the NC750X’s mid-range performance in the faster, flowing mountain sections of our test ride was worth it. The bike reacts well when the throttle is pinned for an overtake for example, dropping a gear or two depending on the auto’ mode selected.

The gearbox can be over-ridden and even in the sportiest, S3, setting of the updated DCT. I’d occasionally knock it down to second gear with a quick flick of a button on the underside of the left handlebar, that would ensure a more enthusiastic exit to a corner which the bike preferred to take in third. By leaving it third the bike doesn’t have enough steam to drive out of the corner. This isn’t a criticism; it’s just how I prefer to ride.

For me, there isn’t enough difference between the three ‘S’ modes as there could have been. If there are going to be the quantity of rider-controlled options, then the difference should be greater. A ‘D’ mode and two S modes would be ample. Even an off-road mode for those keen to test their gravel-related ability wouldn’t have gone amiss, particularly as the NC750 has an ‘X’ designation in its name referring to its adventure prowess. During the short time we tested the bike on a dusty, gravely track I simply flicked the button to engage manual mode and stuck with second gear. It meant I could guarantee the bike wouldn’t be hunting for a gear while I concentrated on testing the suspension and grip levels away from the tarmac.

Drive, or D, mode is pleasant enough for pottering around town and is, of course, the most fuel-efficient way to maximise those miles per gallon. The revs ae kept low as is the exhaust note. No clutch lever takes a little getting used to and if you’ve never experienced one of the very few bikes around without one, you could well be prone to an occasional ‘ghost grab’! To be honest, this should be such a minor concern because the NC750X is a doddle to ride and easy to get used to despite the DCT and its modes. It can be treated as a twist-and-go bike, like its sibling, the Integra (also updated for 2016).

The improvements are certainly noticeable, now being a much smoother ‘box as the dual clutches engage gears 1, 3, 5 and 2, 4, 6 independently. There’s also no pitching of the chassis on its suspension between gear changes and no need to roll off the throttle either – either let the bike do its thing or change up and down manually. Silky.

That said, the audible jump between 1st and 2nd gear both up and down at very low speed is just about noticeable and ever-so-slightly ungraceful. You can hear the clunk more than feel it yet it still counts as a mark against the DCT from being declared a super-modern and slick bit of kit. Aside from this minor niggle, the system is so good that the mechanical change of gears higher in the rev range, under hard acceleration for example, is so efficient that it’s barely noticeable. So many modern car automatic boxes are similar, maximising mpg’s and offering a smooth drive.

Even though the DCT bike weighs 230kg (versus the 220kg of the manual version), its so well-balanced it hardly feels hefty either at low or high speed; testament to the cute weight distribution and the way in which the engine sits low with the fuel tank towards the rear. There’s a positive feel through the raised bars connected to a Dunlop Trailmax D609 via the new Showa forks. Darting between 2nd and 3rd gear left and right-handers coming down the mountain road back towards Malaga at a healthy rate of knots was a good tester for the Honda’s agility. The patchwork nature of some Spanish roads assisted our research in the fact that it tested the stability of the bike and rebound effect of the forks and monoshock. I was impressed with the NC’s ability. This smart-looking bike is also a smart-handler too and good fun to ride, responding well if momentum is maintained. 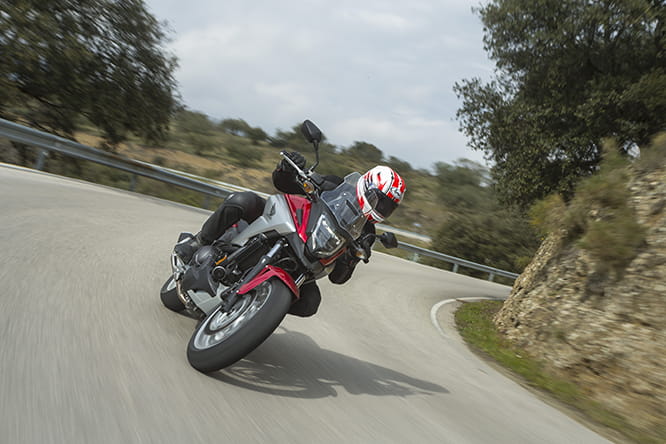 Being an automatic bike, the engine braking is compromised and therefore you’d rely a little more on the brakes. ABS-assisted as is standard procedure these days but the 320mm single, wavy disc at the front is not as good as it should be. The lever is adjustable but pull as hard as you dare and there’s about enough to scrub off the speed. It’s not as sharp as it could be while at the rear the ABS is a little too keen to step in. In fact, I used the rear more on the NC than I would on a regular bike, just to settle it a little and to offer more reassurance when the brakes were put under exaggerated stress.

Speaking of which, when parked on an incline you’d normally slot the bike into first and switch off the ignition to prevent any rolling. Honda have retained their handlebar mounted parking brake because you can’t leave an automatic bike in first gear, it’s simple to use; just pull the lever back like a handbrake in a car then when the time comes to take it off, take the slack and press the button to release.

Storage-wise, the existing and novel fuel-tank located space is now comfortably large enough to hold a full-face Arai RX-7V, and conveniently it’s lockable. That means the fuel tank is at the rear of the bike with its access situated under the pillion seat – fine if you’re not carrying luggage but potentially irritating if your touring with a bag that covers the pillion seat.

The NC750X contains some really effective upgrades, its striking looks so much more refined and better than the outgoing model. The DCT gearbox has moved on remarkably well and the adventure styling really suits the NC giving a better identity. It makes a damn good commuter for the longer journey given its filtering ability, comfort and economy. With a starting price at a shade of over six and a half thousand pounds offers good value too at only £150 more than the 2014 version. The NC750X’s official accessories include heated grips, an Akrapovic exhaust, top box and panniers. 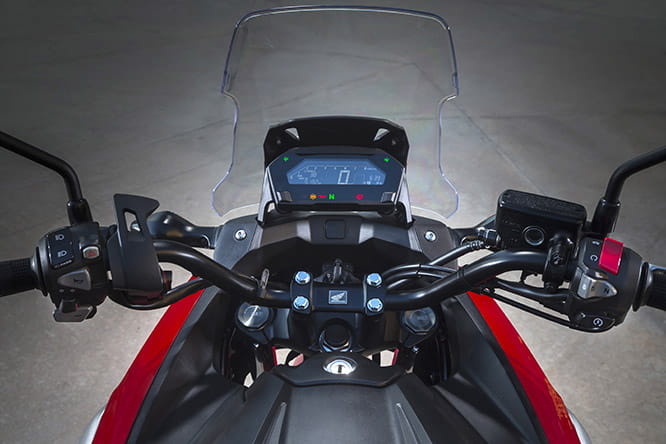 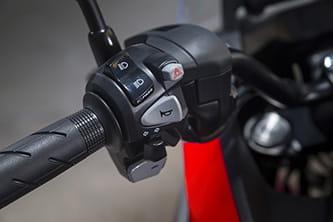 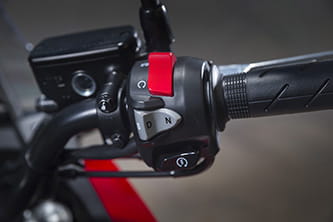 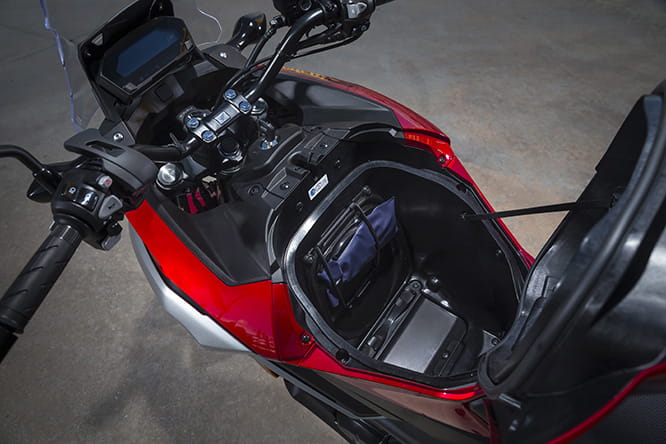 Both the manual and DCT bikes are available in three colours for 2016; Matt Gunpowder Black Metallic, Candy Arcadian Red and, new for this year, Glint Blue Wave Metallic. 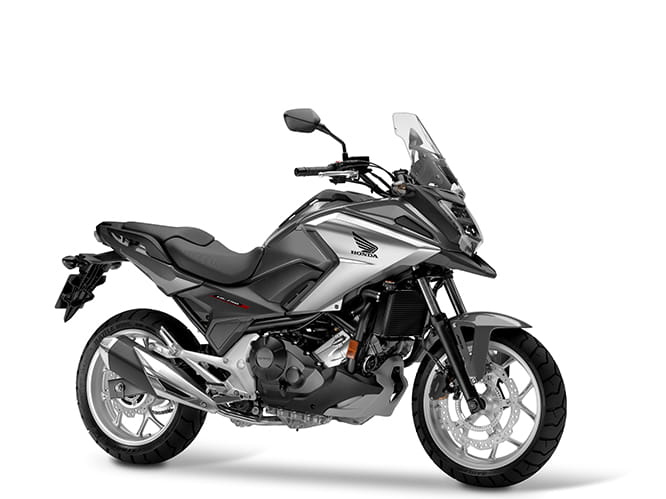 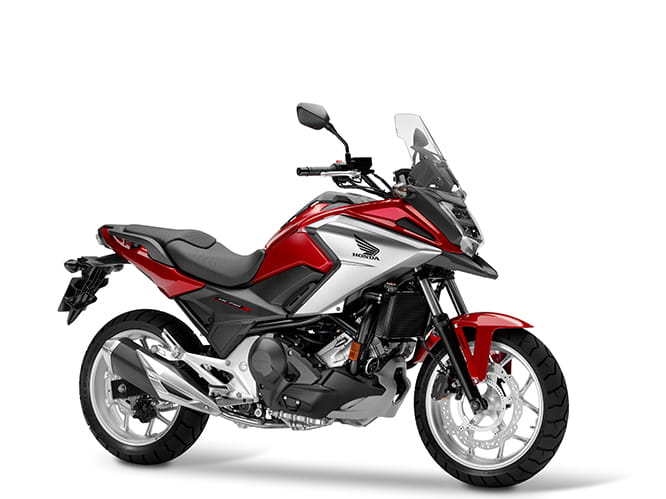 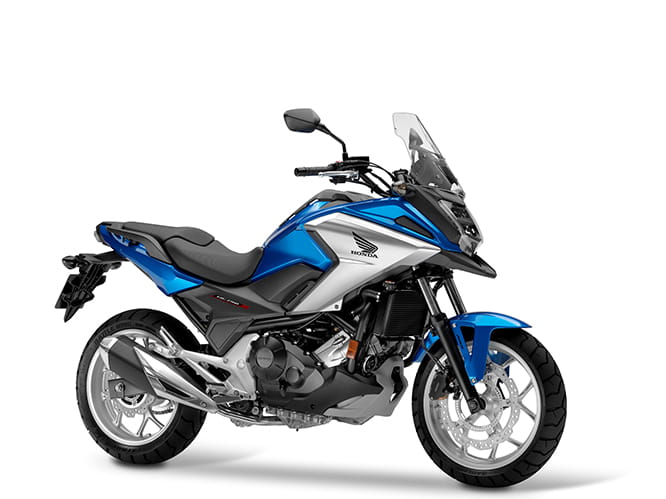