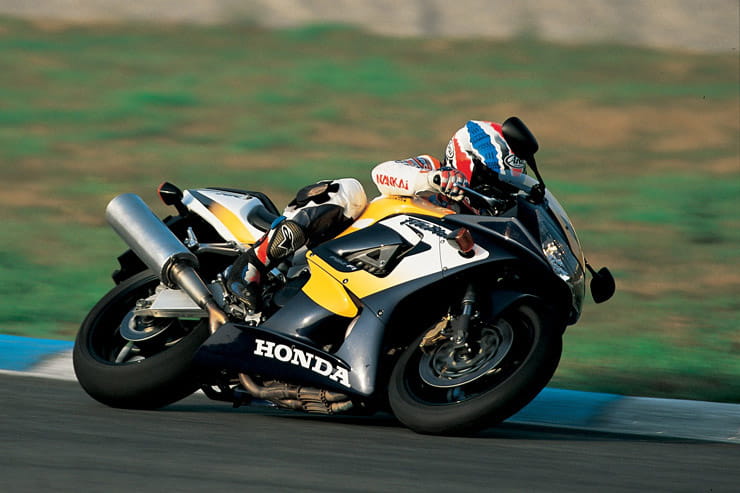 Everyone loves a Fireblade, yeah? Well, yeah, normally, but twenty years ago Honda were finding it a bit hard to get anyone interested in their all-new version of the genre. On paper it looked interesting – a slight capacity hike (from 919 to 929cc) allowing an impressive claimed 150bhp (up 24bhp on the outgoing model), fuel injection rather than carbs, a 17in front wheel in place of the nineties' Blade's much-maligned 16in, and a minimalist new frame with the swing arm pivoting on the crankcases, MotoGP-style. With the whole lot weighing in at a svelte 170Kg it looked as though with the CBR900RR-Y Honda belatedly had a sharp enough Blade to slice some of the swagger out of Yamaha's all-conquering R1.

Somehow, though, it didn't happen that way...

For a start, the RR-Y didn't make anywhere near Honda's claimed 150bhp – more like 125 on a good day. Even twenty years ago, that just wasn't enough for a supposed cutting edge sportsbike. Secondly, it couldn't deliver even that much power in a consistent or controllable way – the new fuel injection system was underdeveloped and showed it, with twitchy response to throttle inputs,  and erratic behaviour on closed or neutral throttle openings. In the dry it was annoying, in the wet it could occasionally be downright dangerous. As if all that wasn't enough, the suspension wasn't up to scratch (or scratching) either – crude damping, over-stiff set-up, and a tendency to tie itself in knots or shake its head over bumps. Even that headline-grabbing 170Kg figure was pushing 200 when you added fuel, oil and water...

It worth pointing out that all of the above is really only relevant in comparison with how good the R1 (also updated in 2000) was at the time, and how good the all-new GSX-R1000 was going to be in 2001. Some owners either don't notice the jerky fuelling and flawed suspension, or simply didn't care, especially as the Honda was marginally the cheapest of the three even at full retail, and considerably less in the real world. However, the litre-class sportsbike market was hugely competitive at the time – small margins mattered, word soon got around that the Honda wasn't up to scratch, and dealers were soon struggling to shift their allocated stock. They were still struggling long after the RR-Y's replacement was introduced in 2002. That bike - the 954cc RR-2 – was how the RR-Y should have been originally. It took the good bits of the RR-Y (chassis, brakes, balance), added some power and sorted the fuelling and suspension issues. Basically, once the RR-2 came out, the only reason anyone would by an RR-Y or RR-1 was if they were deluded or desperate. Well, that's how it felt at the time.

Twenty years on, though, is that still the case? 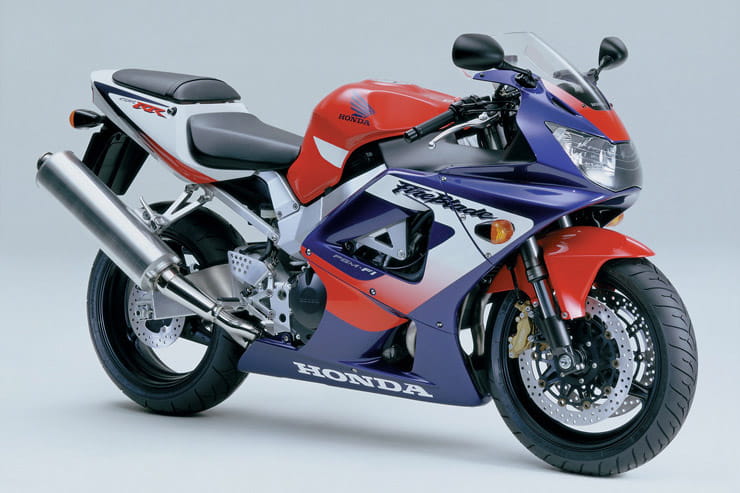 Normally the holy grail when you're looking at any older bike, and especially anything that might evolve into a classic in its own right, is a clean, original, unmolested example with all the original parts present. There's always a market for the heavily modified or the unrepentantly tatty, but the middle ground's where the main interest lies. And so it is with an RR-Y – up to a point. Because a few carefully-chosen modifications can turn Honda's ugly sister into a respectable understudy for Cinderella, so it's worth pinning those down.

There are two main issues - engine management, and suspension. Get those sorted and the RR-Y is absolutely transformed. On the engine management side, the first thing to do (or ask if it's been done) is to remove the PAIR air bleed valves and the air-box secondary flap, fit a Power Commander or similar and invest in a proper dyno set-up session. Most owners will also change at least the exhaust can at this point (bonus points if they kept the original safe somewhere) but what you want to avoid is anyone who changed the can and didn't do the important stuff as well... A well-developed full system also makes a big difference – the original HTEV exhaust valve is restrictive as it's for noise tests not power and the pipework may be titanium but the whole thing still weighs loads. Trouble is most aftermarket systems aren't well-developed – if you find an original Micron full system, you've struck gold. If you then look at the Power Commander under the seat and it says it's a PCIIIr, you've struck gold again. The standard PCIII for the RR-Y only controls the fuel map, while the PCIIIr controls the ignition curve too, giving more control to the dyno operator.

With more – and more controllable - power comes the need to lay it down, and keep it down, so the next thing to look for is sensible suspension mods. Original rear shocks will be tired by now, so look for a quality replacement in good condition – anything from one of the big names can be set up to suit your needs if necessary. Be wary of anyone who says they've fitted something from a different bike. It may fit, but the chances of it working properly are slim. At the front the forks are quality items but can be vastly improved just with a fairly inexpensive re-valve and re-spring to suit your weight and riding style. Ask for invoices from anyone claiming to have had such work done.

With the original main faults cured, the main problems are age-related. Poor earth connections and corroded or loose wiring loom connectors are endemic, and 20 year-old wiring can be hard and brittle, depending on the environmental exposure it's had. That can lead to all sorts of niggly faults with misfires, warning lights and erratic running. Still on the electrics, charging problems are far from unknown (Yeah, big surprise – remember the old advert: "You meet the nicest auto-electricians on a Honda!"). Regulator/rectifier units are a common problem – stator problems usually come as a result of RR problems, rather than the other way round. Replacement upgraded MosFet units are available from Electrex world among others. Even if everything's working well, it's worth upgrading all the wiring and connectors linked with the alternator, RR and battery.

The engine and gearbox are pretty solid if cared for. Camchains get rattly, but should calm down as the engine warms. Some owners swear by a manual cam-chain tensioner, but it's a sod to fit with the engine in the frame, so not a quick fix. If there's rattling from the left side of the engine, check the stator bolts haven't started to come undone - it happens. These motors generally run a bit more rattly on full-synthetic oil, so might be worth going to semi-synth, unless you're a serious track day addict. Some owners say the clutch and gearbox prefer semi-synth too. The gearbox needs the help – never the smoothest shift even when new – but shouldn't be too bad. If it is, check the linkage and lever pivots aren't binding. If they move freely, you may have shifter drum/selector fork problems – engine out, sump off...

Lastly, it's a sportsbike – watch for crash damage and be alert for evidence of excessive track day action (heavily chipped wheels from frequent tyre changes, lock-wired components, mismatched parts, evidence of trips through the gravel, clean standard bodywork on an otherwise tired-looking bike, etc.). Biggest crash problems come if the bike's been down on the left-hand side – even a fairly mild tumble can trash the generator cover and wipe out the genny itself. Worse, a heavy knock can crack the crankcase and damage the crank, potentially writing off the whole engine.

You can pick up an RR-Y/1 as a project for well under a grand, but we'd advise you not to. Because it was only made for a couple of years, and didn't sell that well, there's no big used spares backup out there as there would be for, say, a CBR600 of similar age, so you can end up getting stuck in a spiral of parts-chasing. We reckon you're better off looking for a good, clean one to start with, and since they start at around two grand even at dealer prices, you'll probably find it'll work out cheaper in the long run than trying to resurrect a wreck. There are never that many of these Blades on the market at any one time, but you'll usually have a choice of anything from a clean but relatively high mileage (say 40-50,000 miles) example down around the two grand mark, rising up to optimistic dealers looking for £3500 for a bog-standard 10-15k miles example. In an ideal world we'd say hold out for one with fuelling and suspension mods sorted already, but due to the limited numbers out there, that's probably unrealistic, so always bear in mind that you're likely to want to invest at least a few hundred quid in fuelling and another few hundred in suspension, and haggle accordingly. Oh, and one last thing – check the bike comes with its master key for the H.I.S.S. immobiliser system. If not, you can't get new keys cut and coded - lose or break the standard key and you have to replace all the locks AND the bike's main ECU. The exception is parallel import models from the US, which weren't fitted with the system. 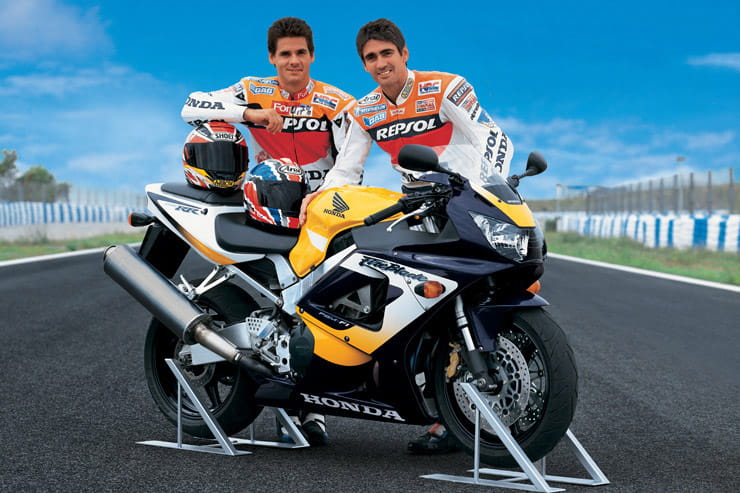 There's no dedicated owners' forum for the 929cc Blades, except as a sub-set of wider Blade sites or on Facebook, but Blade owners tend to be multiple offenders so you'll often find wider experience and advice from former owners on a general forum than you might on a specific version anyway. We'd recommend www.fireblades.org for a start – you'll have to sign up to see content. Moving on, the US-based (but with worldwide membership) www.cbrforum.com covers all CBRs, not just Blades, but they have a lively and useful 929-specific section which is worth joining. You'll find some useful advice on exhausts and Power Commanders at www.hardracing.com, based in the States, but mostly the RR-Y/1 doesn't have much in the way of specific aftermarket parts available due to its short model run. Asking on the various forums will usually reveal whether parts destined for other models will fit though, as is the case with exhaust systems developed for the 2003/4 954cc model.