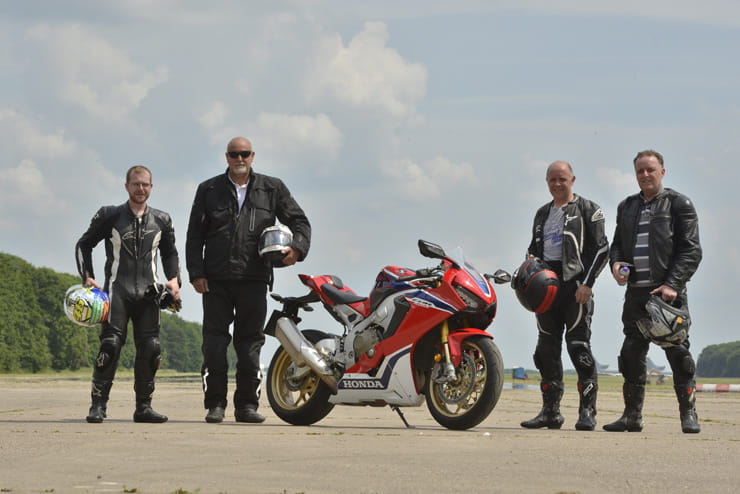 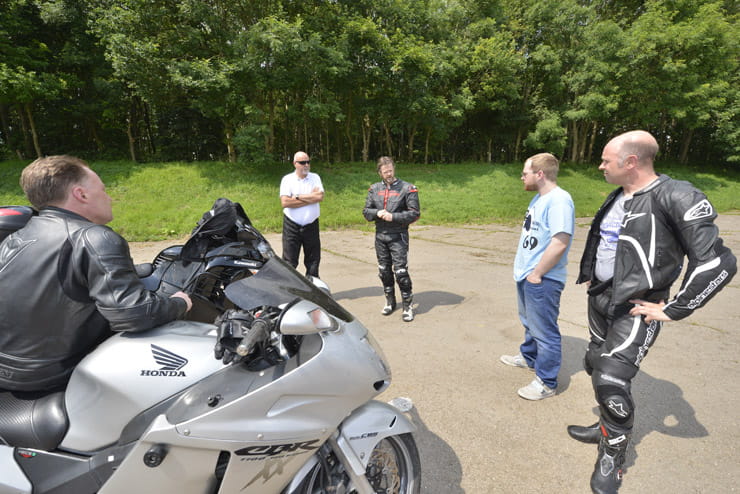 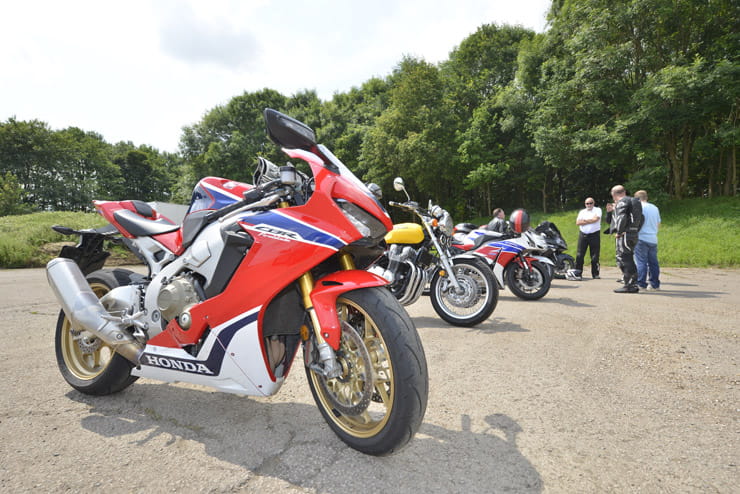 It’s fair to say Honda’s 2017 Fireblade hasn’t had the easiest start in life. Even the press can’t decide if it’s the new best litre sportsbike or disconnected ride-by-wire confusion.

The chief concern for some riders is the unpredictability of picking up the throttle mid-corner and finding the desired drive off a turn. Both the throttle position of the engine pick-up and the amount of throttle response seem to vary – giving the bike a feeling it’s the ECU’s programming that’s deciding when, where and how much acceleration to let the rider have.

But even if, as McGuinness suggests, the race bikes’ problems are distinct from the road bike’s reported issues what’s undeniable is the Blade has become contaminated by association, particularly courtesy via the often poisonous realms of social media.

But what really matters is what you, the riding public, think.

To find out what normal humans make of the troubled Honda, BikeSocial takes four prospective Fireblade customers for a test tide, found via a shout-out on our social media channels, under controlled conditions at Bruntingthorpe Proving Ground in Leicestershire. You lucky things, you. 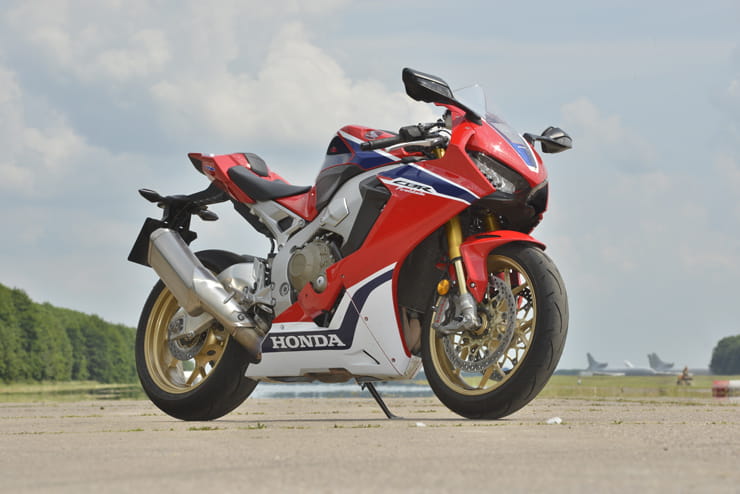 The plan for the test is pretty simple. Four chaps of varying degrees of sportsbike background will take BikeSocial’s 2017 Fireblade SP for a spin around Bruntingthorpe’s combined 2-mile runway and 2-mile perimeter road, which includes a couple of twisty infield sections.

The riders know why they’re here, but we’re asking them to try and focus on the relative ease of controlling the 189bhp motor, because that’s the bit about the new Blade with which people seem to have the biggest problem. We’ll assume the ride quality delivered by the semi-active Öhlins suspension is top drawer because a) it is and b) no-one is complaining about that. We’ll also try and steer the riders away from thinking too much about the bike’s handling, braking, steering too. We’re not even that interested in what they think of the outright engine performance. It’s nearly 190bhp; everyone already knows that’s never not quite much too fast enough. So we taped up the speedo.

What we really want to find out is if so-called regular riders can detect the same issues with throttle control and connection between the rider’s right hand and the rear tyre that some testers have experienced or will they be on the ‘what problem?’ side of the playground.

Without further ado, over to the experts: 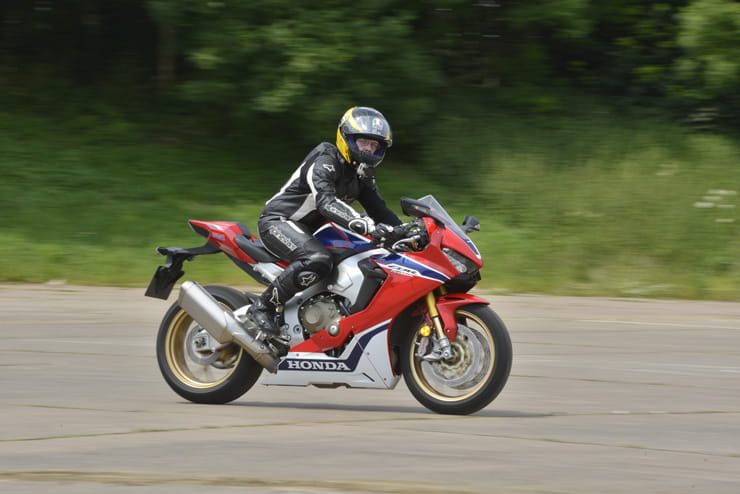 “My preconception of the new Blade; I’ve heard about all the issues – the box is full of neutrals, the throttle sticks open... but these are just on race bikes with different gearboxes and different electronics to the road bike... so at the end of the day I’m not Guy Martin or John McGuinness, and I’m not going to be riding the bike at 150%. So I’m coming at this with a completely open mind.”

After the first ride on the 2017 Blade SP: “I loved it! It’s fantastic! I’ve come here with a completely open mind, but you hear rumours of what people have said about it – but nine times out of ten they probably haven’t even ridden the bike. So they’re making up snap accusations about it, that get passed along from person to person without having actually experienced it.

“So that bike has just been absolutely flawless. The only thing I noticed was when I closed the throttle, it’s slightly spongy. But there’s no issues with it revving on, no issues with the gearbox; and as for the autoblipper and quickshifter, I loved it. Loved it. No problems at all.

“And in terms of controlling the throttle – there’s no problem. It feels nice. It feels conventional. There feels like there’s no throttle play at all – it’s great. I was in a comfort zone straightaway. Based on this ride, everything that’s been said is a load of nothing.”

After the second ride on the 2017 Blade SP: “I enjoyed that. I was using the quickshifter a lot more – up and down – but again there was no snatchiness, hesitancy, or not knowing what it was doing. Nothing like that. Based on this ride, if I had the money I’d be happy to buy one. I’ve no idea what people are talking about. It’s a rumour that’s gone round and just put people off. I can’t fault it.” 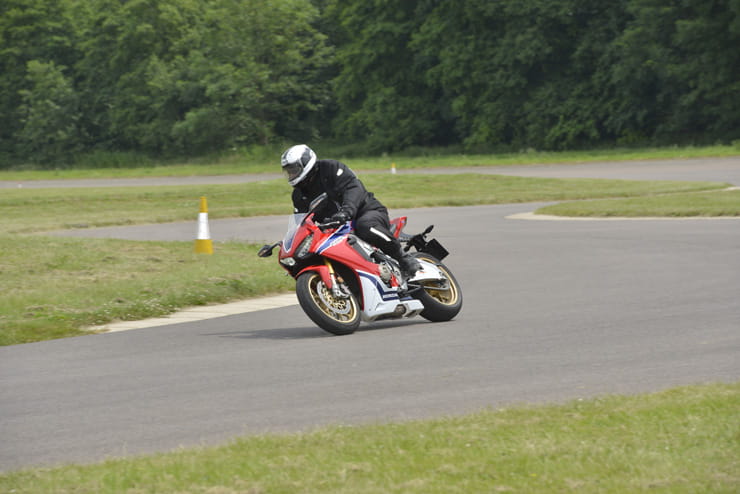 “I don’t have any particular preconceptions of the Blade, but if it’s as good as Honda say it is, it’ll be excellent. But I’ve heard about the race problems – I know McGuinness fell off it and Guy Martin crashed with that false neutral. And I’ve read about the road bikes too – but, let’s face it, Honda aren’t stupid, are they?”

After the first ride on the 2017 Blade SP: “Goodness me! I;ve never used a quickshifter before, up or down, and it’s brilliant. What a bit of kit that is. Every bike should have that. It’s something else. God yes. The fact you can knock it down into fourth, open the throttle, and the front just lifts. It’s as easy as it can be. I dunno what mode it’s in, but acceleration-wise it’s a wonderful bit of kit.

“As I came into the tight section of corners, I stayed in second gear and gently rolled the throttle on and off – and it did exactly what I wanted it to. I think the control is every good – wonderful, in fact. I have no idea, based on this ride, what any of the fuss is about with this bike. It’s as near perfect as can be for me. If I could afford one, I’d have to have one; simple as that.”

After the second ride on the 2017 Blade SP: “I think I need to do my helmet up slightly tighter. But now I know where I’m going a bit more, I had no issues with the throttle control at all. It’s a smooth ride, does exactly what I want it to do. Being a big lad, I’d like a bit more wind protection! But I’d have no qualms buying one – none whatsoever. And the more I rode it, the happier I’d be!” 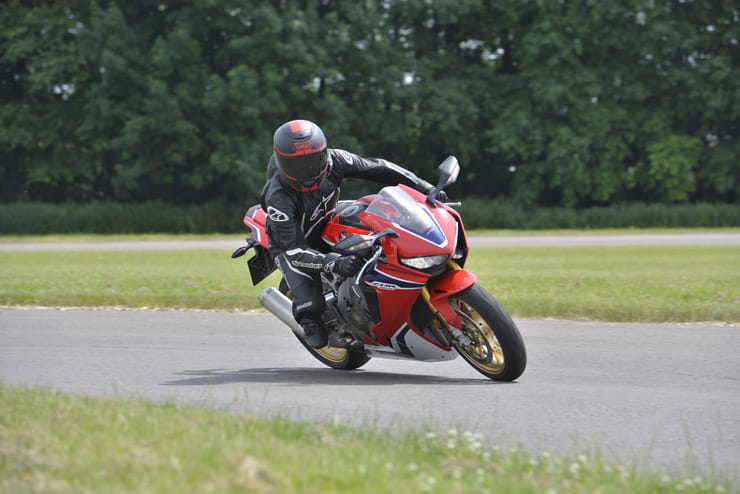 Before the first ride on the 2017 Blade SP: “I’ve had the Blade for a year; had a VFR1200 before that. I bought the VFR to go touring on, but the missus wasn’t so keen – so I always wanted a Blade, so I bought one. And I’m over the moon with it – although I’m taking to Misano so we’ll see how it gets on! I’ve got no issues with it at all. I’ll never ride to its full ability, but for the way I ride it’s perfect.

“I’m aware of the fuss about the new bike; Guy Martin off it with a false neutral and it didn’t run at the Senior TT. I’ve heard a few things about the bike on the internet too. But I think it’s an awesome-looking bike. We’ll see what it’s like.”

After the first ride on the 2017 Blade SP: “My Blade is so slow! It’s very different – you can really tell. You come out of a corner and it wants to lift, then it doesn’t. My 2015 bike would be all over the shop. It’s mental.

“It feels lighter and smaller than my bike – and a lot of the time it’s hard to keep your brain in with it because it’s that quick. It’ll run away with you – but I didn’t feel any problems – completely in control. It did precisely what I wanted it do. I can’t say I felt any lag or problems with the throttle at all. Compared to my bike it’s miles quicker and miles more stable. I can’t ride mine at that pace!”

After the second ride on the 2017 Blade SP: “That was a bit unnerving. It jumped out of gear nailing it from third, fourth, trying to get fifth... and I literally had to stop to get it into gear. Then it happened again round the back of the circuit, and then I had another problem going down the gearbox when it wouldn’t go into gear. So three times altogether, in the space of a couple of laps. I ended up on the grass at one point. The first two times, going up the box, shifting without the clutch, between fourth and fifth. Coming down the box, it was between fourth and third. I pulled the clutch in right away, but it was a problem.

“I’m confident it wasn’t me – I tried being more positive with the shifts, but it’s not given me great deal of confidence with it.

“I had no problems with throttle control though – apart from that it was perfect.” 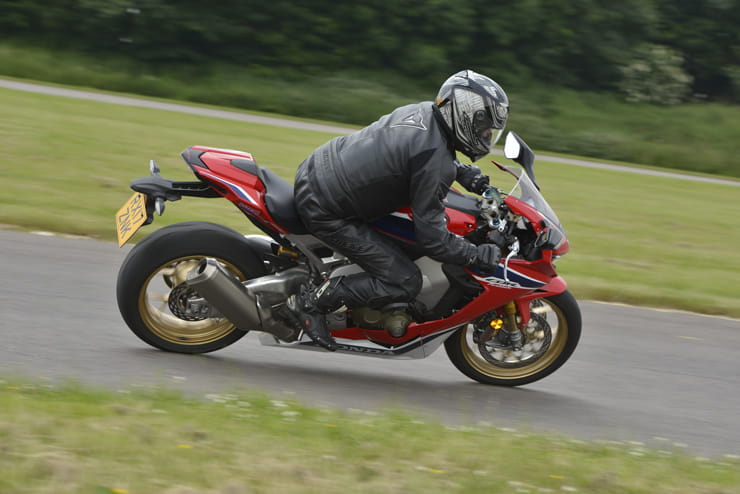 Before the first ride on the 2017 Blade: “Before the Honda I had a Suzuki Hayabusa; two of them. And a VTR SP-1, couple of Kawasaki Ninjas... but I’m getting on a bit now and I need something a bit easier! But I wish I had a Blade years ago.

“I’ve had a little read about the Blade – apparently you can bang it in first gear and after that the electronics will take over and do everything? I don’t know; never ridden a bike with traction control, autoblipper and quickshifter, ride-by-wire and all that. It’ll be interesting with all the electronics on it. I know McGuinness had crashed and Guy Martin, but that’s basically a different bike.”

After the first ride on the 2017 Blade SP: “Exhilarating. The throttle is perfect; so responsive. Getting on the throttle, back off again, on again – all without any trouble. There’s no comparison with my Blackbird. It’s tame compared to that. But there’s no problem controlling all that performance, even just jumping on the bike for the first time.

“The engine braking is really good too – as soon as you come off the throttle, the things slows down so much. And the autoblipper and quickshifter help you out too – the electronics are amazing. Just fantastic.

“Knowing some of fuss around the bike, I’d say the people on the internet who’ve been commenting about the bike must’ve been pissed-up or something. I think the grip and acceleration and control are so impressive.”

After the second ride on the 2017 Blade SP: “Still the same; no problems controlling the bike at all. Going through the box, acceleration; all perfect. If I was of a mind to buy the bike, the only issue I’d have is the mirrors – they’re rubbish! And I’m not sure I could ride it much more than 100 miles before getting off for a rest. I’d love one, but it’s out of my price bracket.” 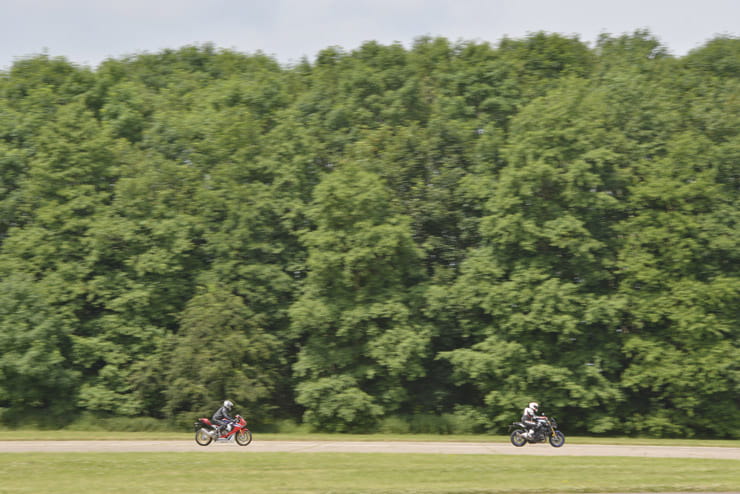 So there it is: on the basis of a short test ride, the average Joe Bloggs is so blown away by the new Blade’s outright performance, control and range of features (and especially the quickshifter and autoblipper) it’s a struggle to form a coherent sentence afterwards – and so now you know how it feels!

But although, obviously, this test is about as far from the last word in scientific rigour as it gets what it shows is, apart from a niggle about the gear-shifting (which could be a result of rider error; certainly the autoblipper and transmission get muddled if you go anywhere near the clutch when you’re backshifting – you need to leave it alone or else the ignition won’t cut and the gear won’t engage) the 2017 Blade SP’s reputation as a wayward, out-of-control, mind-of-its-own beast is, according to four ordinary blokes, entirely undeserved.