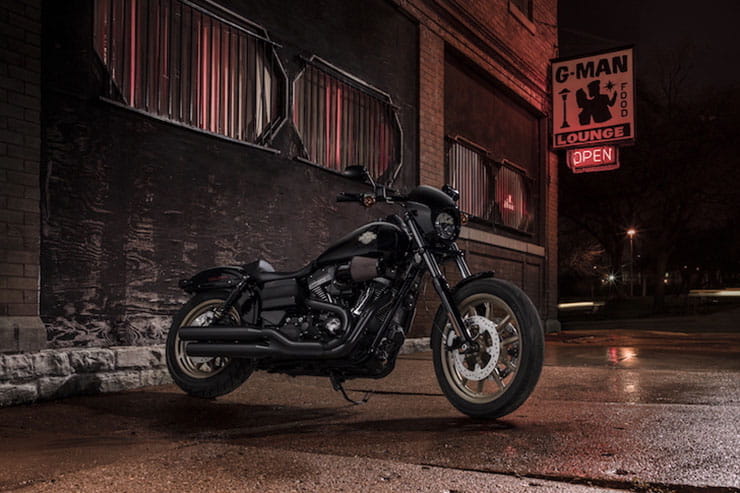 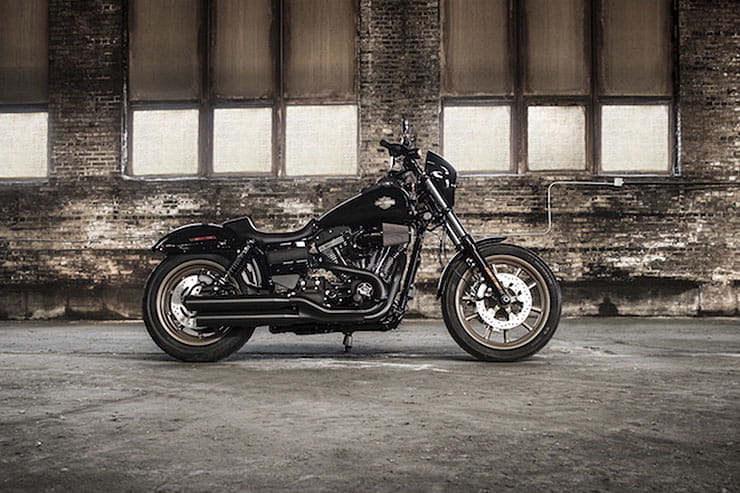 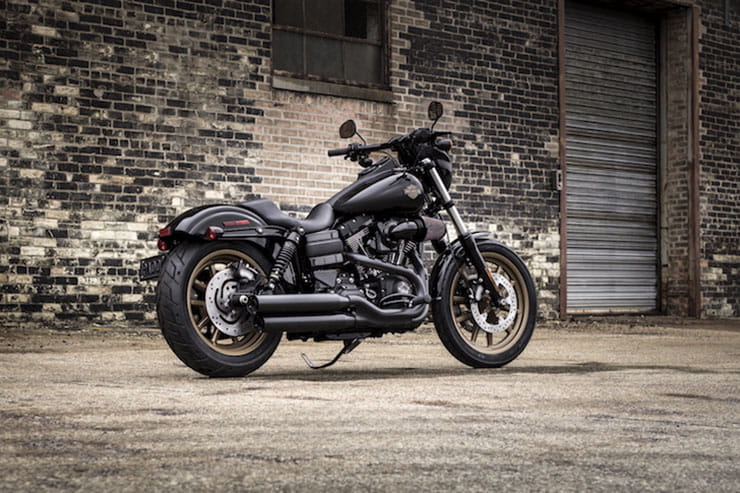 If they ever make another series of the epic biker drama Sons of Anarchy, then the whole gang should be riding the Harley Dyna Low Rider S – it’s the epitome of bad-ass.

Launched 2016 it was the latest bike in Harley’s mean and moody, ‘blacked-out’ Dark Custom range. Essentially, it’s a ‘performance’ version of the Low Rider – hence the ‘S’ – and featured the then biggest engine fitted to a production Harley-Davidson: an 1801cc, Screamin’ Eagle powered Twin Cam beast that more than lives up to its performance-based Harley FXR roots with a massive 115ft-lb of torque.

And with the S it's all about that engine – its imposing to look at and absolutely staggering to ride. It’s a proper, laugh out loud powerhouse of a drag bike – but one that’s not scared of corners, either.

The Dyna Low Rider S was also one of Harley’s most short-lived models, being discontinued for 2018 when Harley folded its twin shock Dyna range into its new ‘hidden shock’ Softail family. A Softail-chassised successor was launched in 2020 leaving the short-lived Dyna twin shock original a fairly rare, prized beast, with the high residual used values that go with it.

When launched in 2016 the Dyna Low Rider S was priced at £14,995 and proved a popular buy. Deleted just two years later when Harley’s twin shock ‘Dyna’ family was absorbed by the Milwaukee firm’s new Softail family, it’s now regarded as something of a cult classic (even though a Softail successor was launched in 2020) with the high residuals thyat go with it. As a result, today good used Dyna Low Rider Ss still go for upwards of £14K – if you can find one. 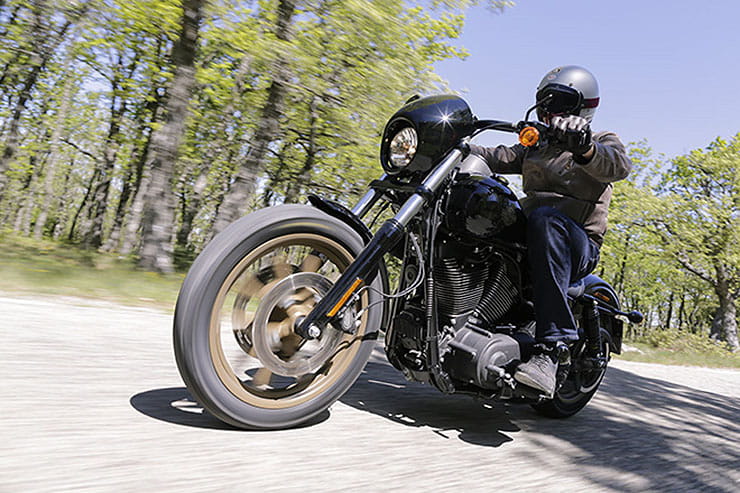 The hype on that engine means it's no surprise when you hit the throttle and you have to hang on to those fat, wide bars and feel the full force of its 115ft-lb of torque. No power claim is made, but by our reckoning the Low Rider S puts out around 90bhp – but that’s not what this bike is about.

The Low Rider S may be a performance cruiser in the greatest hot rod, dragster style, but you never need to rev it. Instead, it’s all about the torque, its low-down punch. The meat of the engine is between 2500rpm and 5000rpm. There's a redline at 5500rpm, but after a day's riding I never found it.

The Low Rider S’s big ram-air intake and those gloriously ‘blacker-than-black’, twin side exit stacked pipes make way more noise than their Euro 4 friendly spec should suggest. It's an incredible induction noise, sucking in small insects and blowing them out the back in a rage of V-twin glory. There’s a roar on the intake and a subtle rattle when you shut off so much so you’d swear it had been fitted as an aftermarket upgrade. But this is true, factory custom badness (in a good way) for less than £15,000. 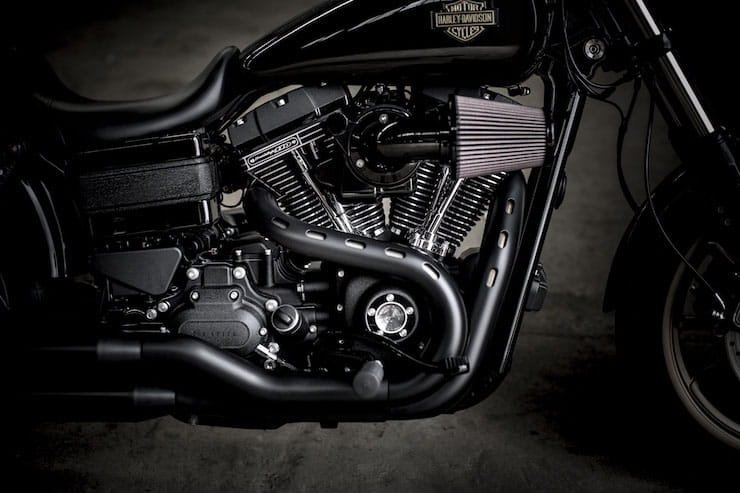 That big, performance engine was never built for economy and its uprated performance comes at the slight cost of fuel economy, especially if ridden hard. But the Dyna Low Rider S, being a low-revving V-twin that still produces way less power than many, isn’t overly thirsty either.

On average, we’d expect mpgs in the mid to high 40s, which, combined with its 17.8-litre fuel tank should return a range of around 180 miles.

Although very much a performance Harley, the Dyna Low Rider S is ultimately still a fairly laid back, heavyweight cruiser with the handling and ride that goes with that.

But allthough that gold front wheel looks miles away, to give the bike that long, low and mean stance, it feels good when you ride it. On bumps, the short travel suspension soon finds its limit of travel and the back shocks kick you out of the seat when it's really bumpy. But most of the time the handling is spot-on and the Dyna Low Rider S can be ridden impressively fast if the mood takes you. 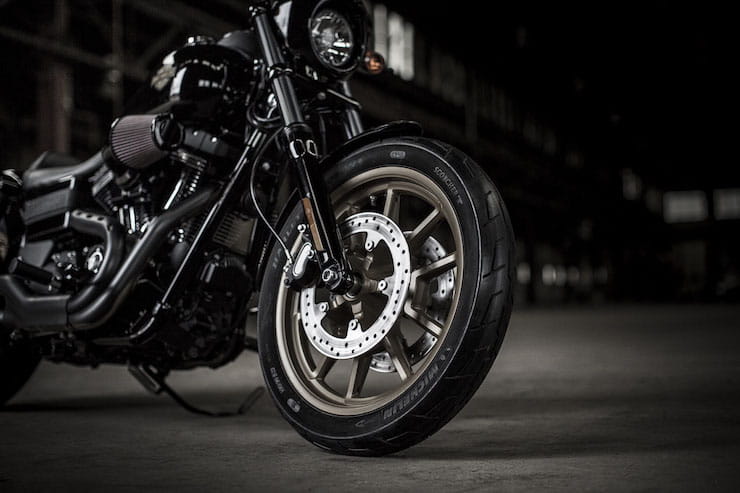 The S’s twin front 300mm discs grasped by decent four-piston calipers are double the set-up of the standard Low Rider and a welcome boost considering the S’s more sporting attitude. There’s a single disc with a smaller twin piston caliper at the rear with both ends supported by ABS.

Overall, it’s an adequate set-up for a ‘performance cruiser’ but nothing to write home about, either.

The Low Rider S’s ‘hot rod riding position takes some getting used to. On the one hand there’s an ultra low seat, but there’s also semi-forward pegs and a fairly straight handlebar that you have to reach forward to. There are more extreme Harley riding positions, but the Low Rider S certainly isn’t a comfortable, long distance machine and that small nose cowling does little to keep of the wind or rain.

It’s also a single seat Harley – and all the better for it. No pillion in their right mind would want to sit on the back.

The Dyna Low Rider S is classic ‘old school’ Harley-Davidson, right down to its 1970s-inspired XLCR black and gold colour scheme. As such, there are few frills, fewer luxuries and, ABS assisted braking aside, absolutely no electronic rider aids. But, for a bike of this style, that’s probably as it should be.

There is, however, plenty of nice detailing. Look over the bike and Dark Custom details are everywhere, from the Lester magnesium lookalike wheels, the black pipes the black mirrors, blacked-out Harley logo and even blacked-out clocks. Incidentally, there are two on the tank – one for revs and a digital display for trip, gear, mileage, or time. In truth they're hard to see and would maybe look and work better located behind the small screen above the bars. But that's a minor criticism. 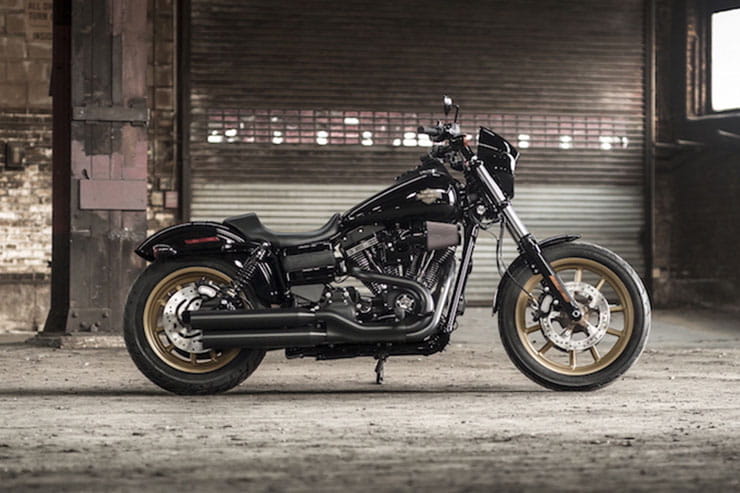 With the Dyna Low Rider S there are no gimmicks, no traction control, no rider modes, just a great, beautiful black lump of a motor, a good chassis and some of the coolest styling seen on any Harley. The team behind the bike admit they spend a lot of time in the museum looking at Harley ‘past masters’ for inspiration, but then combined it with what's happening on the street, bringing ideas bang into the ‘now’. It works, too – bikes like the Low-Rider S that confirm that when Harley get it right, they really get it right.

On the slight downside, the Dyna Low Rider S is also a fairly extreme package, with little comfort, less pillion capacity and not much practicality all round. In this Dyna form it is also one of the shortest lived Harley models although that added exclusivity gives it allure that’s keeping prices high.

But as a pure, performance, Harley hot rod that looks bold, black and brilliant, there are few better.

Three things we love about the Low Rider S…