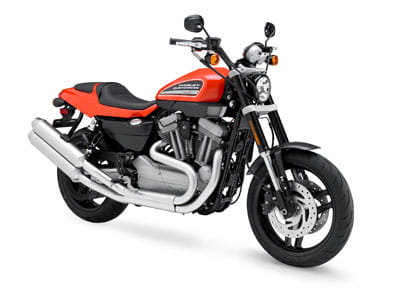 The XR1200X came hot on the heels of the 2009 XR1200, itself a nod at the legendary XR Harley racing bikes from another era. What the XR1200X came with was a series of new parts that put right any niggles from the previous XR12, which wasn’t a lot in the first place.

Where the XR1200X scores well is in the suspension area. The 2010 bike arrives with quality Japanese-made Showa suspension front and rear. This simple change makes a big difference to the bike’s overall ride quality. The forks are Upside Down (USD), Big Piston Forks that heap a great deal more feedback from the front end.

The piggyback rear shocks are slightly longer and firmer to make give a more compliant action from the rear as well as sharpening up the steering. This new set-up isn’t quite in line with Moses parting the Red Sea but on a 260kg (wet) motorcycle with sports riding bias it makes a huge difference.

As a sports bike, the XR1200X is as far away from a Japanese or European equivalent as London is to Beijing. Their middleweight naked sports are producing in excess of 115bhp and weighing 80kg less. Even Buell had higher spec equivalents when it was alive and using a similar engine.

On the bright side, there’s not a lot of chrome ornaments on the XR1200X. It looks the part of a big bruiser naked and to an extent performs like one. This is mainly down to the air/oil-cooled 1202cc Evolution engine and the stomping effect of a claimed 73.8ft lbs of torque output. Horsepower seems to be a dirty word in Harley world because they don’t like to give this figure.

Experience says somewhere around 75-85 horses are wheezing their way through the dual over-under mufflers. Another 20 or so wouldn’t go amiss if only to help motivate the rider trying to keep his weighty XR in sight of the Yamahas and Kawasaki bikes of this world.

Harley has stuck to the racing XR theme quite closely. The riding position is upright enough for the rider to be classified as a kite when he hits 60mph. But in truth it’s not an uncomfortable place to be for the first 120 miles. Even after this mileage there’s a good chance an XR rider will still be smiling because he’s had fun getting the best from his bike. Plus he and his bike will be getting all the attention at the mobile burger van because… because he has a Harley-Davidson

+ points – Showa suspension makes a big difference to its sports riding capability. Very different to the raft of European and Japanese bikes of this ilk.

- points – heavy bike and it shows in just about every situation; pulling it out of the garage, car park manoeuvres, hairpin bends etc.