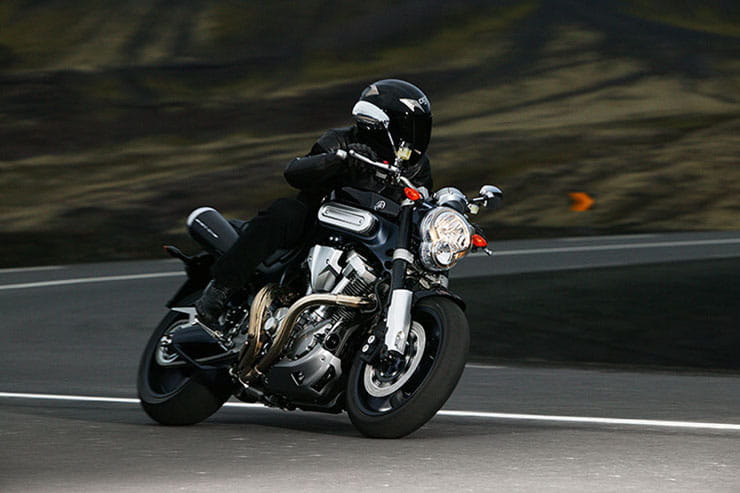 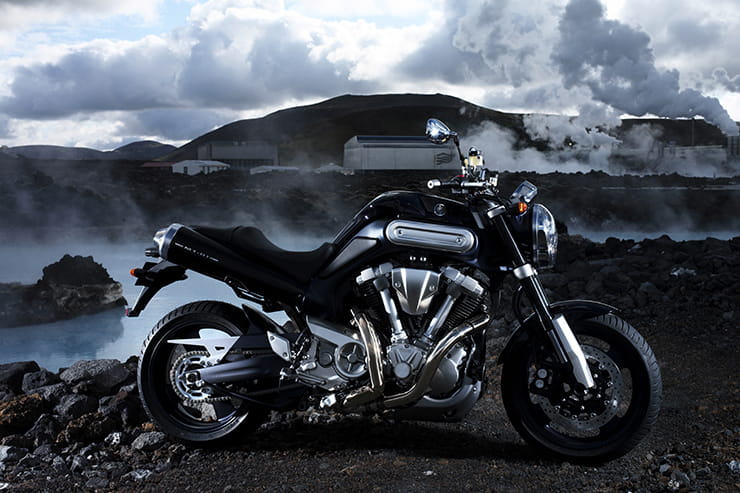 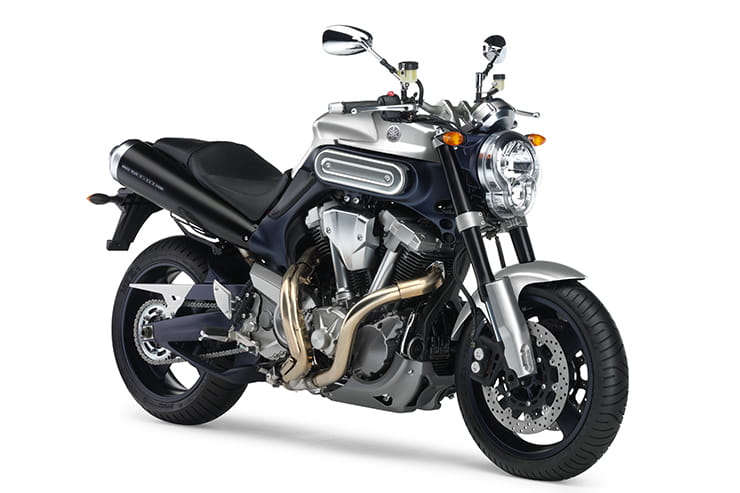 The first ever MT model, with MT standing for Master of Torque, appeared way back in 1999. Unveiled at the Tokyo Motorcycle Show as a concept bike, the MT-01 was a big-capacity naked bike powered by an air-cooled motor that was intended to deliver a soulful riding experience – or Kodo as the Japanese called it. The theory was that this would provide a welcome change from the exceptionally good, but somewhat sterile, mass-produced machines emerging from Japan. Five years later the production MT-01 arrived and it has to be said was a bit of a failure. Powered by a heavy air-cooled motor that was taken from a cruiser, the MT-01 looked good and handled well but never made an impact in the showrooms. As a result, production of this air-cooled naked beast stopped in 2010 (probably well before if truth be told and it was just left over stock that was selling) and the MT-01 found a new niche as it quickly developed a cult following. If you want something a bit out of the ordinary, and don’t mind paying for the privilege, the MT-01 is an interesting and fun bike to ride. It’s no master, but it is certainly a decent machine with bags of spirit and soul.

Locating an MT-01 is slightly tricky as Yamaha didn’t sell that many and owners tend to hold onto them as there isn’t really anything currently for sale that is equivalent. That said, there are usually one or two out there so it isn’t too hard if you really have your heart set on owning one. Prices start at £6000 for a moderately high mileage (around 25,000 miles) bike with pristine examples going for between £8000 and £9000. That is quite a high price tag for a bike that cost £12,849 new but due to their relative scarceness they tend to hold their value now with minimal devaluation, making them a safe investment that might even go up in value in the long run.

You can’t call a bike a ‘Master of Torque’ and not deliver on your promise and sure enough, the MT does have more grunt than a pig farm. The V-twin engine makes a peak of 110lb-ft of torque at just 3750rpm while peak power is delivered at 4750rpm and the rev limiter cuts in at just 5000rpm. However this is only half the story and from the moment you let the clutch out the MT’s motor is thumping out bags of torque, making it very easy to ride at low speed. There is no need to rev the V-twin, take it easy and keep it low in the rev range to enjoy that lumpy grunt. In that aspect it’s just like a cruiser – and there is a reason for that…

The MT-01’s air-cooled engine is taken from the firm’s Road Warrior cruiser, which was briefly sold in the UK but was mainly an American-market model. With 1670cc to play with, it’s a big old lump but due to its cruiser heritage isn’t exactly a sporty engine as it only has five gears and runs push-rods and a single cam. Although very reliable, just as Buell discovered it isn’t always a great idea to stick a cruiser motor in a sporty chassis as its limitations tend to be highlighted. You can’t really rush the MT-01’s gearbox, which is more than a little agricultural and clunky, and a lazy throttle response feels a touch incongruous to a bike aimed at sporty riding. Not only that, the engine is physically bloody enormous! And so are the OE exhausts, which also weigh a ton. If buying used, reliability isn’t a worry but finish is, so look for corrosion and any signs of paint flaking. In general the MT is beautifully finished with a real attention to detail, so don’t buy one that hasn’t been well looked after. 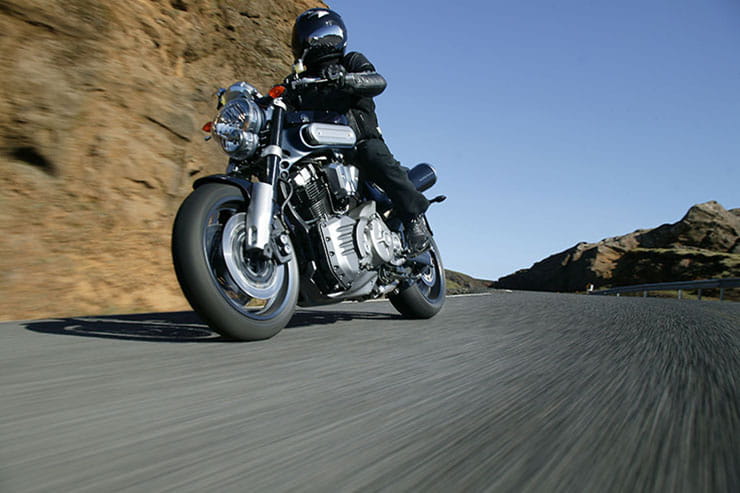 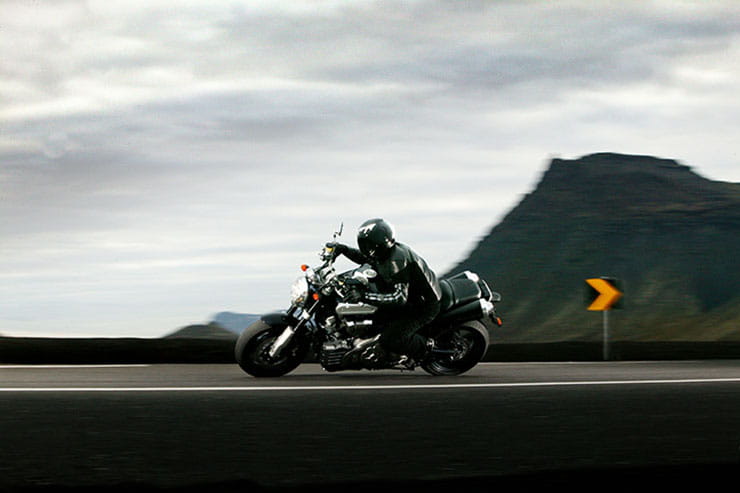 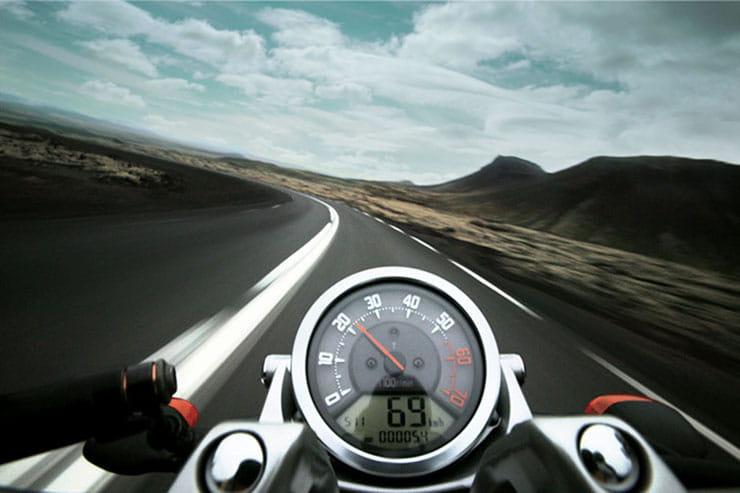 The air-cooled motor is so low-revving it tends to deliver reasonable economy with mpg figures in the 40s but the lack of an ‘overdrive’ sixth gear is annoying and harms its economy. Owners report the fuel warning light generally starts to illuminate between 90 and 100 miles, which is a bit quick however the reserve range is fairly long.

Yamaha made a lot of fuss about the MT-01’s handling and even threatened (it didn’t happen) to have a one-make race series! Once you get over the fact it is a big old beast the MT is actually a really sweet handling machine that is more than up for sporty riding. You need to take into account the bike’s weight, so don’t expect it to turn or stop like a sportsbike as you are dealing with 265kg of machinery, but you can certainly have lots of lots of fun. The suspension is top-quality with fully-adjustable units both front and back and the chunky aluminium swingarm not only looks great it also helps the bike’s handling. In 2009 Yamaha did release a small number of MT-01 SP models, which came with Öhlins suspension as standard, yet while they certainly up the handling game they are very few and far between so you are highly unlikely to ever encounter one for sale. Also, it has to be said, the gold forks and shock do look a bit gaudy on the fairly understated and dark MT…

Armed with R1-spec four-piston radial brakes, which are actually technically a monoblock, and a radial master cylinder the MT-01 is certainly not under-braked, which is a good thing considering you are trying to stop over a quarter of a ton of flying metal! ABS isn’t an option but you don’t really need it as the bike’s weight and fat tyres help pin it to the road. Watch out for warped discs, which can happen, and also discs nearing their wear limit. By now the OE rubber lines will need replacing for braided aftermarket items, which is more a safety modification than performance one and cheap to complete. 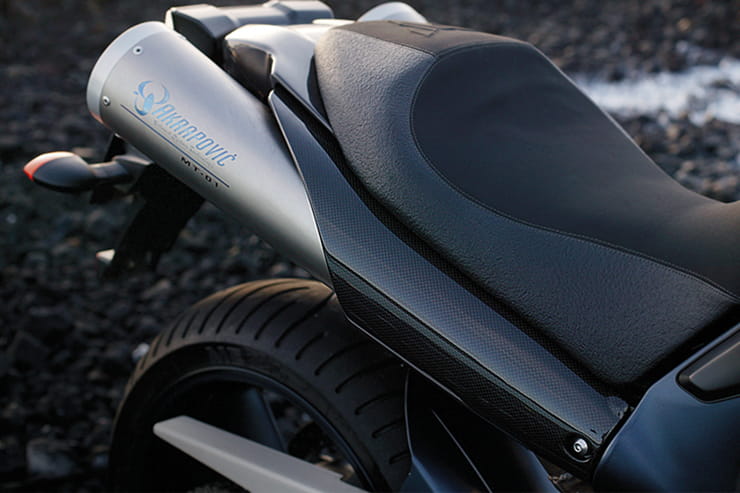 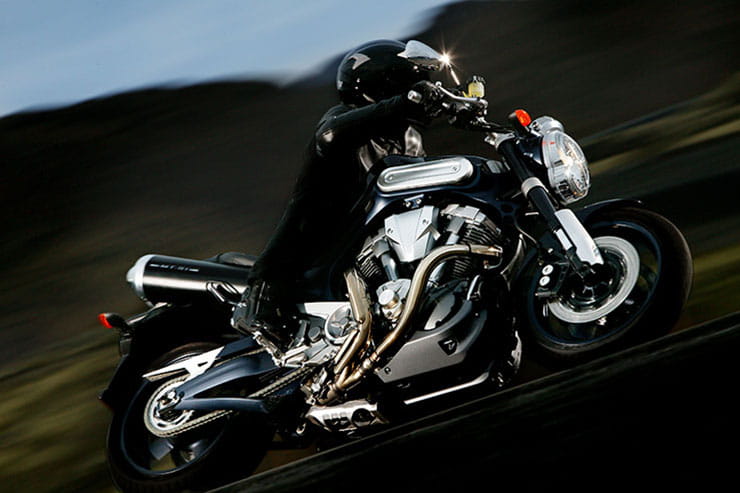 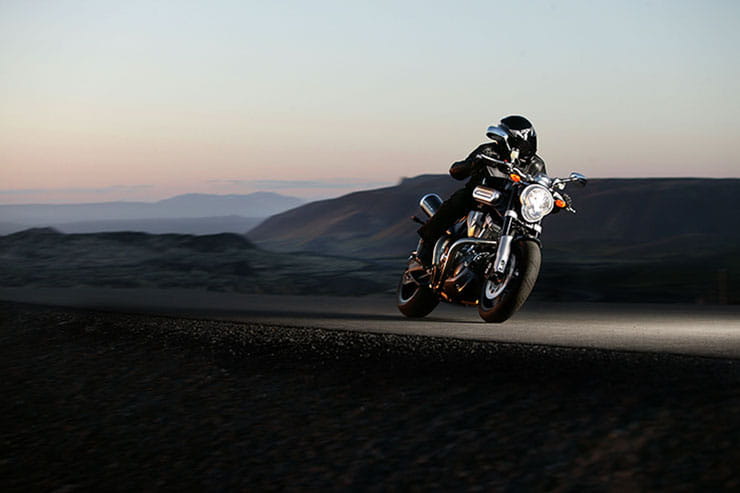 Aside from the obvious fact that the MT is a naked bike and therefore lacks any wind protection, the Yamaha makes for a good tourer. The seat is sumptuous, the high bars comfortable and the engine nice and relaxed. Fitting panniers is tricky due to the underseat pipes and the pillion seat is quite small but you can certainly take the MT on a tour, just with minimal spare clothing!

In terms of rider aids, you are talking a mid-2000s bike so you get an LCD dash and that’s about it. No ABS, no traction control and not even a gear indicator. That said, the rear lights are LED, which was quite cutting edge back then… As with all Yamaha models, check the immobiliser’s red ‘master’ key is included in the sale as you need it to reprogram spare keys. In terms of accessories, most owners add Akrapovic (or other brand) underseat pipes to replace the huge OE items (Yamaha did actually sell a few bikes with Akras fitted to shift stock) and a couple bolt on a screen but that’s where it ends. Back in the day Yamaha did talk about a series of ‘performance kits’ (three stages) that involved a hot cam and other tuning bits and bobs but it never emerged on the mass market.

Like so many bikes that challenge riders’ perceptions, the MT-01 is viewed in a better light now than it was back when it was in showrooms. An interesting bike that although heavy is fun to ride and actually surprisingly agile, the MT-01 is best thought of more as a performance cruiser than a super naked and if you want an upright bike that has bags of soul, it’s a good option. Don’t buy one expecting to be wowed by its performance, buy one if you want a cruiser that handles well and has a high degree of exclusivity.

Three things we love about the MT-01 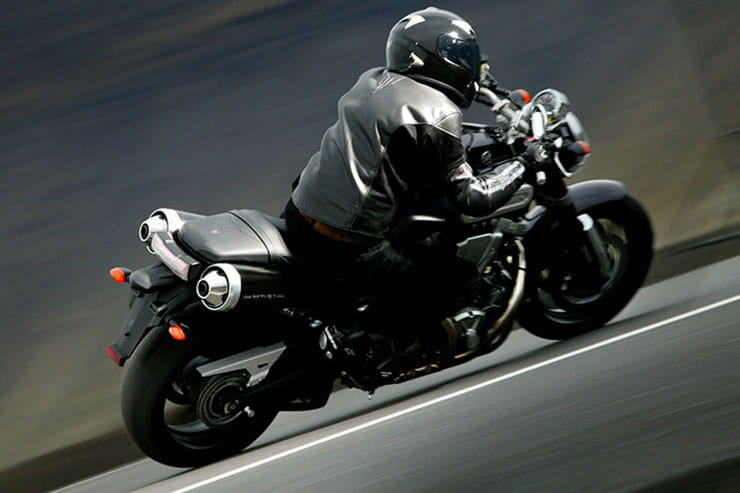 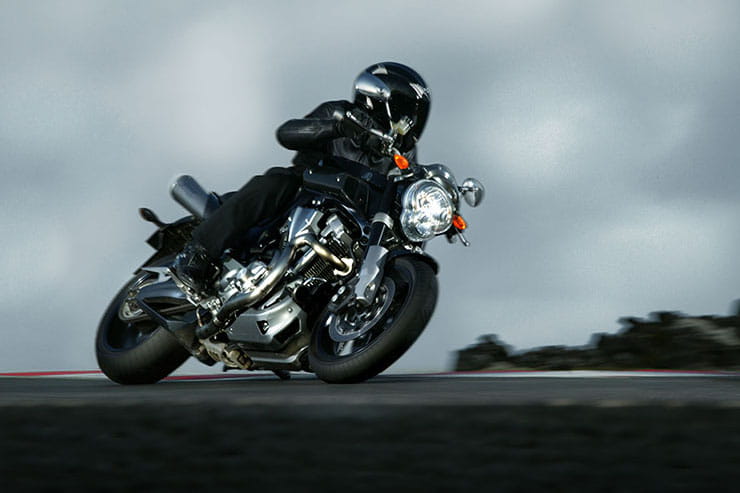 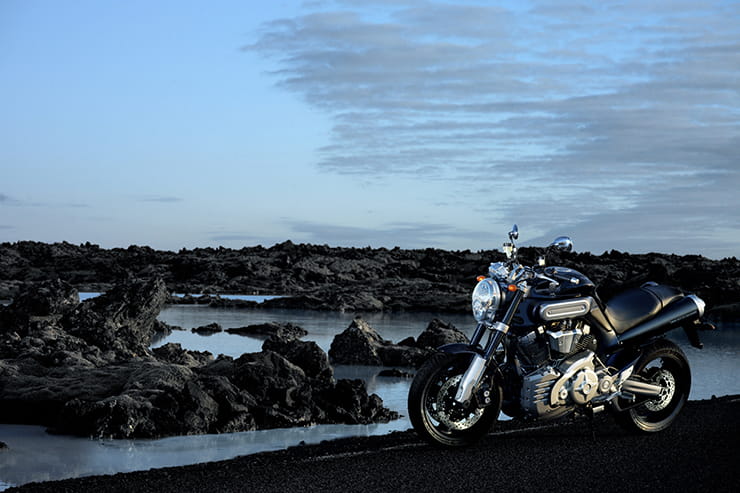