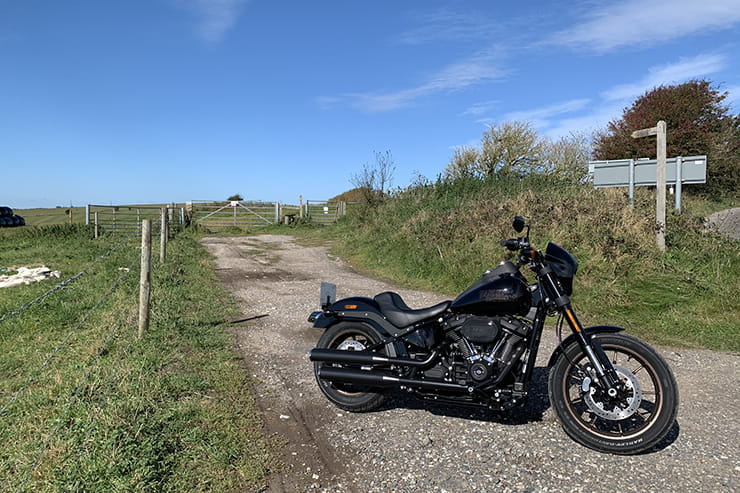 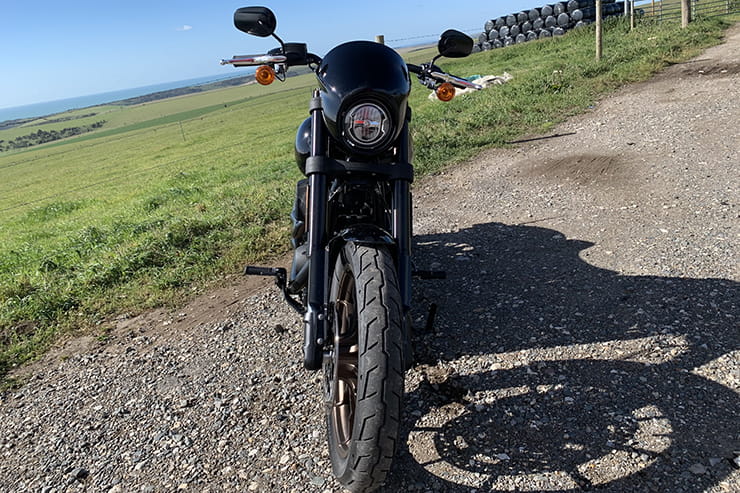 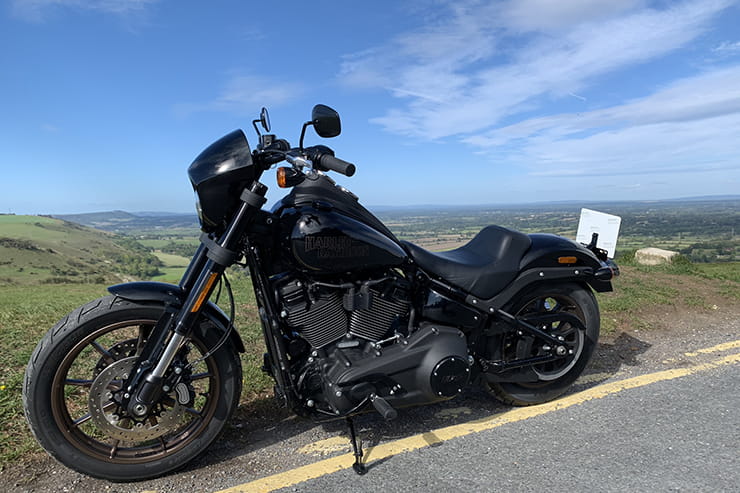 Harley-Davidson know more than most about motorcycle marketing. When their Dyna range of twin-shock twins was about to be replaced a few years back, they waved goodbye with a limited-edition Low Rider S that was painted all black, apart from the wheels, which were a sort-of muddy brown.

Then they basically covered their newly named Low Rider S in (black) glue and rode it through the accessory catalogue while also fitting their 110 Cu-in (1802cc) Screamin’ Eagle motor. The LRS sold out pretty quickly, snapped-up by collectors, happy to have the smartest, blackest example of H-D’s legendary Dyna.

This year H-D announced a new Low Rider S based on the Fat Bob, with which it shares most of its major components. The new bike differs mostly from the old one in that it has the 1868cc Milwaukee-8 engine, a single-shock Softail frame and also comes in silver. 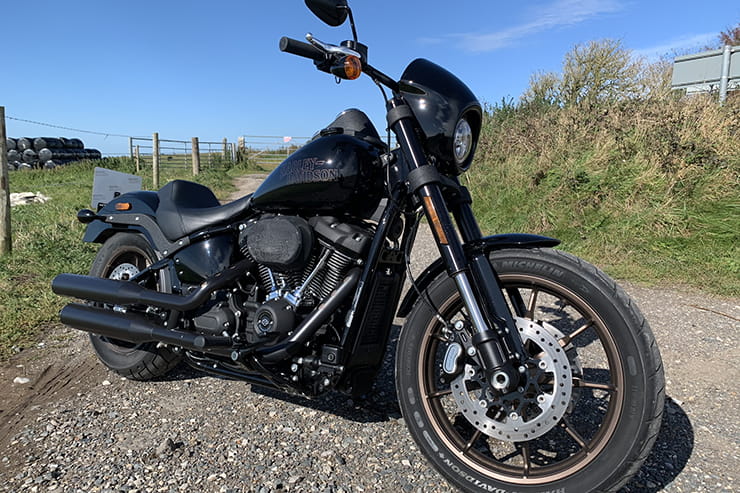 Almost £16k is pricey, but Harleys haven’t gone up as quickly as many other bikes

List price in black is £15,825 (silver is £385 extra) and, as you’d expect Harley has many flexible finance offers to help you put one in the garage. On PCP a £2500 deposit means 36 x £204 per month and a £9271 final payment. On hire purchase the same deposit and 36 x £416 per month lets you own it outright. Harley’s finance allows you to add extended warranty and accessory packages to the finance. A visit to your local dealer will let you understand all the options available.

Harleys generally have excellent resale values because demand for used bikes is strong. 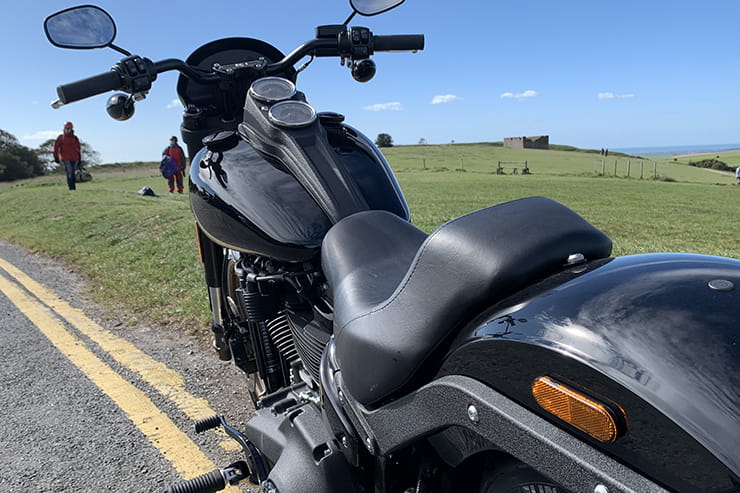 Low seat is comfy, but bars are high and set forward. Hard to explain just how weird it feels

The remote key fob lives in your pocket. There is no ignition switch, but there is a conventional key-operated steering lock in the steering stem and an alarm, which will scream at you if you approach the bike without the fob. This is not cool.

The seat is 690mm low. That’s 26½ inches in Brexit. And while the bars aren’t all that high (for a Harley), they’re a long way forward. Now, lift a foot to where you assume the footrest will be. The seat may be low, but your feet are not. Nor are they as far forward as you expect they might be.

Once the bike is rolling, everything makes sense. The low-rev drive slides your backside into the bumstop while your knees are waving around in the breeze. Tucking them in is easier on the 2020 machine than its dad because the comic-book death ray projector disguised as a Screamin’ Eagle ramjet air filter has been replaced with a stock air filter that appears to be wearing stockings.

Harley’s latest big air-cooled twin is a little more modern than you’d think. The hard-working fuel-injection delivers glitch-free drive at all revs and the fly-by-wire, short travel throttle makes it feel faster than you’d think too. Harley don’t usually quote power figures, preferring to highlight the 119lb-ft of torque at 3000rpm. Unusually in this case Harley UK are quoting a figure of 93bhp for the Low Rider. That might not sound much for an 1868cc motor but imagine if all your power delivery was squashed into just 5000rpm.

Given the way it encourages you to ride and the amount of weight to accelerate, an average fuel consumption of 46mpg is acceptable, if not exceptional these days. In theory that means you should squeeze around 185 miles from the four-and-a-bit gallon tank. 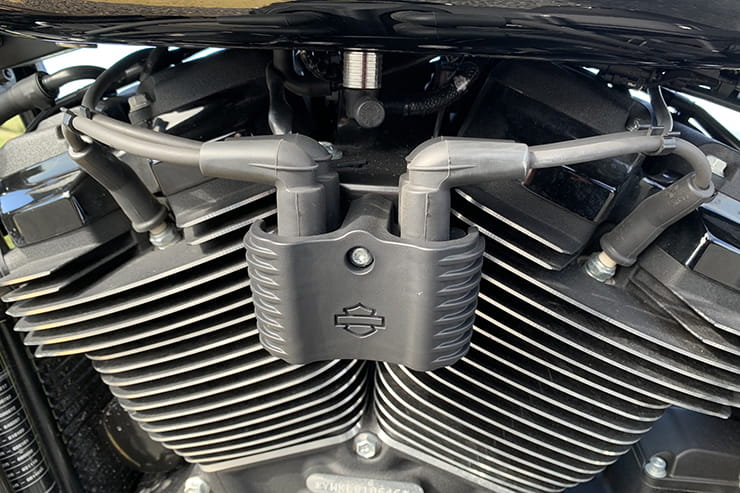 No one does big, throbby twins better than Harley. There’s a surprising amount of tech in there too.

Harley’s Milwaukee 8 engine is still air-cooled (with oil assistance), still operating its eight valves by improbably long pushrods and now having an almost square cylinder dimension of 4x4-and-a-bit inches. They also make around fifty per cent more power as Harleys used to produce not that long ago.

The biggest surprise is how much it likes (relatively, of course) to rev. Open it up in the lower gears at 3500rpm and be genuinely shaken (literally) as this cartoon motorcycle heads quickly for the low-slung horizon.

The Low Rider’s engine has integral balancers, where the twin cam in the old Dyna relied on visually-entertaining rubber mounts to tame the vibes. A mate who owns both says the rubberised ride on the older bike is actually more vibe-free than the more balanced new one. On the new machine, there are more high-frequency tingles, but less of the comical shudder at idle.

The clutch pull is long and non-adjustable but the clutch itself is light and consistent. The gearchange is also consistent if not exactly subtle (like most modern Harleys) and you always know when you have engaged a gear by watching the flocks of birds startled by the sharp cross-county crack of sweet selection. 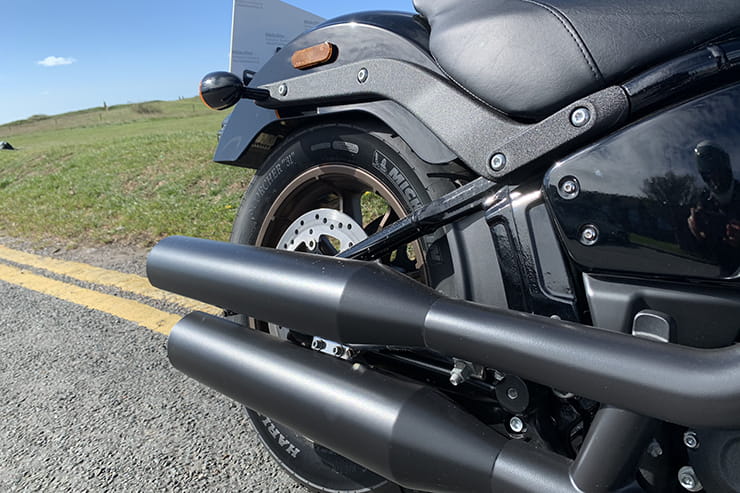 The 2020 Low Rider has a very different chassis to the older model. For one thing it’s now a single-shock Softail rather than the old bike’s twin-shock Dyna (there should probably be a trademark symbol after Dyna, along with every other word in the HD catalogue – apologies) arrangement. The Softail is confusingly designed to look a bit like a hardtail with the shock hidden out of site. Anyone else struggling to keep up? It steers better than the ground clearance allows. Suspension travel is similar, although the geometry is different. 43mm Showa upside-down forks work well but have no adjustment.

Like all Harleys, the handling is fine once you’ve worked out how to ride it. Brake early, release the brakes gently and the suspension will be sitting nicely in the middle of its travel as you tip into the turn. Do this and you can at least use all the not-very-much ground clearance.

Unlike other Harleys, the Low Rider S actively makes it harder to corner because the riding position is pretty much the opposite of everything required to control a motorcycle in a corner. HD know how to make a bike handle and they know how to make a good riding position. It appears that the two teams weren’t talking to each other when they signed-off the Low- Rider S. Imagine being a child who accidentally sat in a bucket and whose unusually-tall parents are trying to pull you out by holding your outstretched arms while telling you to keep your feet off the ground so you don’t get your shoes muddy. That’s the template HD appear to have used for the Low Rider riding position. Now imagine trying to execute the fine control required to go around a corner at 70mph in that position 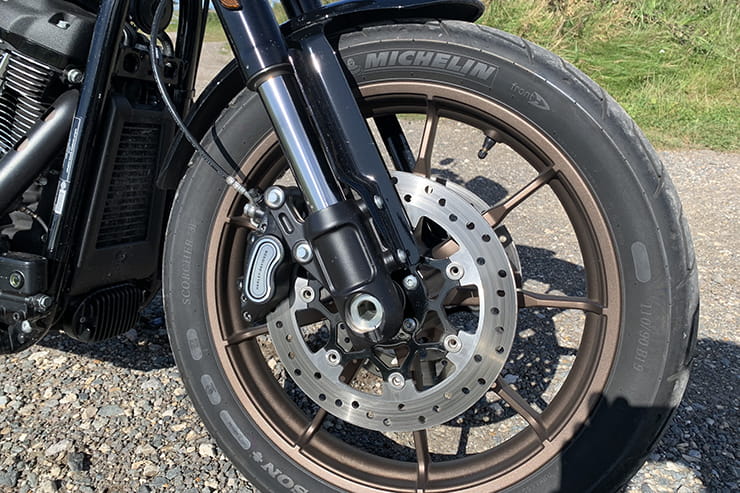 Brakes are by Brembo wearing Harley badges (a bit like the Michelin tyres, which are also HD branded, like most things on the bike). Four-piston front calipers grip floating discs with non-intrusive ABS and stop the 400kg of bike and rider well. The front ones are strong, but the rear is surprisingly ineffective no matter how hard you stomp on the pedal. This is important on a Harley because part of the cornering technique relies on a subtle dab of back brake mid corner while the rider concentrates on throttle control. 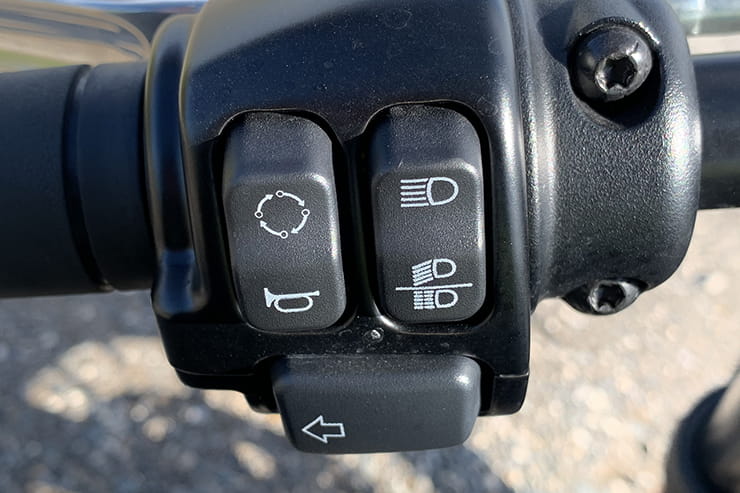 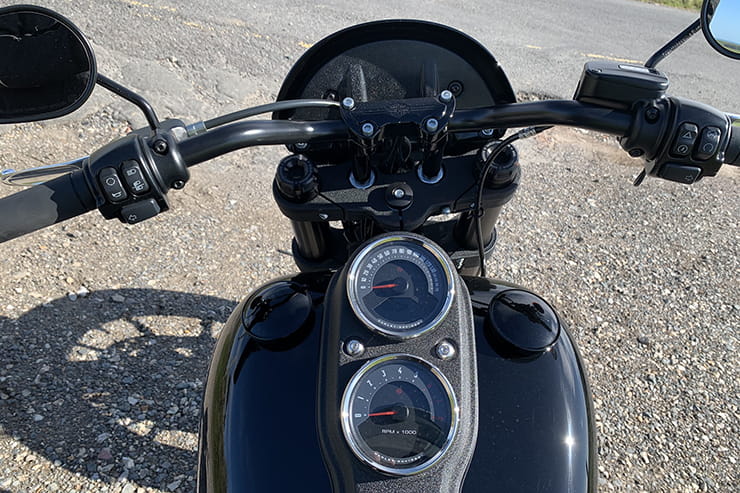 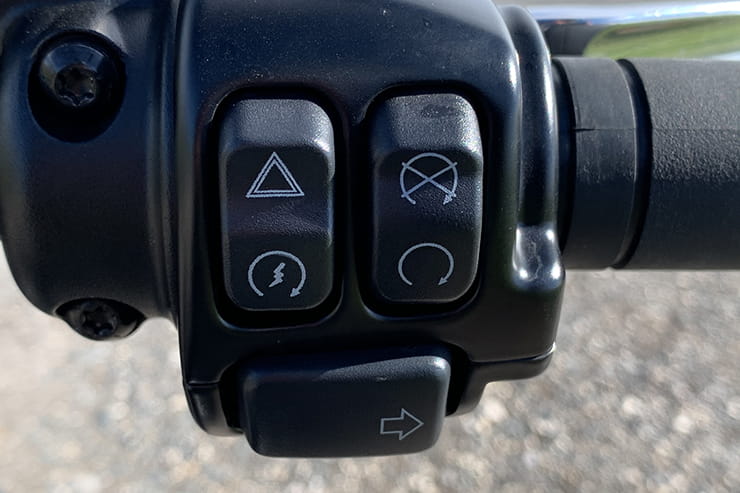 Switchgear is simple to use, clocks are a long look down and info is displayed very small

Twin tank-mounted clocks will please the purists but annoy everyone else. The speedo also shows the other rider info (trips miles, fuel consumption, range remaining etc) but needs you to look a long way down to see it.

Switchgear is simple, but different to other bikes if this is your first Harley. Indicators are controlled separately on each handlebar. You scroll through displays in the speedo using the left-most button that isn’t the horn, switch on the ignition with the kill switch and start the engine with the button next to it.

There’s no pillion seat and you might need a glamorous assistant aboard a second machine with some luggage capacity should you want to cruise continents. Or you can fit your own bags, but then your Low Rider S will look like some other Harley in the range. 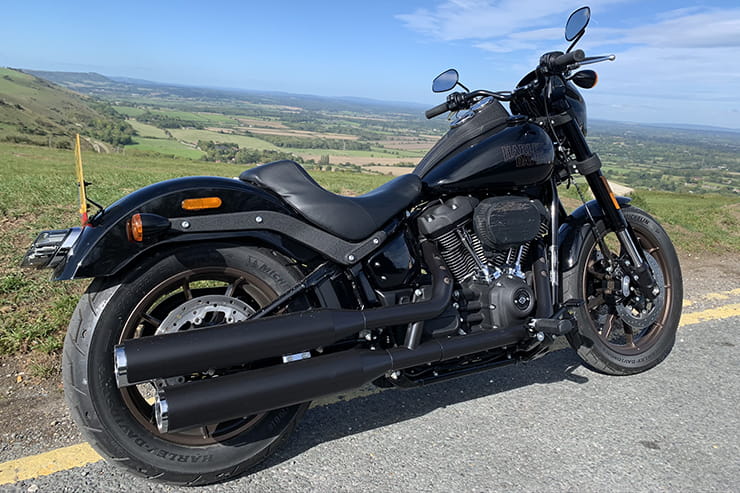 You can sneak up on it from any angle, but the alarm still goes off

Harley Davidson know a thing or two about making heavyweight motorcycles exceptionally comfortable as anyone else who’s done Route 66 and a couple of laps of Arizona, California and Utah on one of their big tourers (or a Sportster like my wife rode) will confirm.

So I can only assume that they wilfully designed this one to be as uncomfortable as possible. In time, you get used to it and start to enjoy the fun to be had opening the throttle as hard as you can at 4000rpm in third gear and wondering when Harleys got so good at revving fast.

If you, like me, now live where the roads are so busy and bumpy that any kind of spirited riding is impossible, then you’ll have realised that sports bikes (and even sporty nakeds and adventure bikes) spend more time waiting to be opened-up and enjoyed than they are actually used in anger.

One alternative is to take to the narrow, bumpy back roads; quiet, scenic and the perfect environment for relaxing and blowing the cobwebs out on a cruiser. But not this one because every now and then you come across another car or tractor or dead end that means low-speed control and use of the back brake (I use the rear brake a lot to help low speed riding). The combination of the Low Rider’s bizarre riding position and a back brake that appears to have neither power or feel or any real purpose at all conspire to make things even trickier than they should be on a 308kg motorcycle.

It's a lazy and moronic motorcycling journalist cliché that so many Harley reviews start off with the sentence, ‘I don’t normally like Harleys but…’ I find myself doing the opposite with the Low Rider. ‘I normally look forward to riding a Harley but…’

One day I will buy a Street Glide or a Sportster or maybe a Street Bob. I won’t be buying a Low Rider S 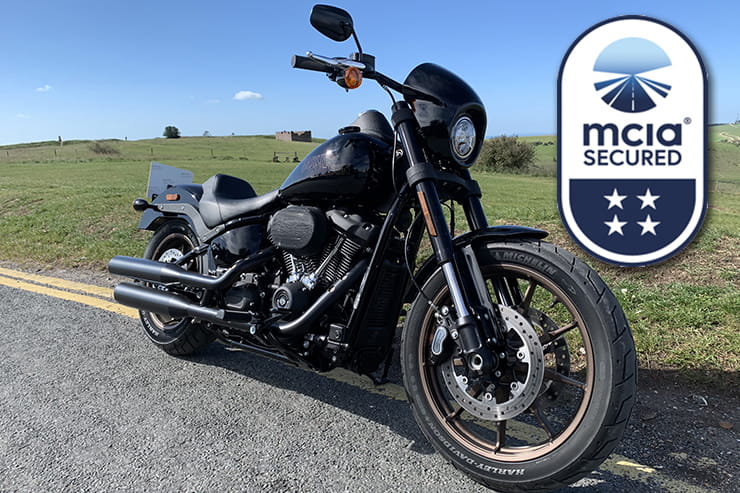