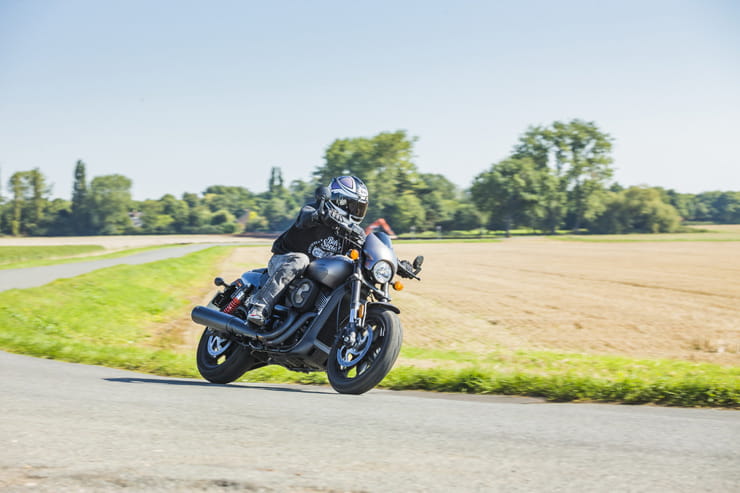 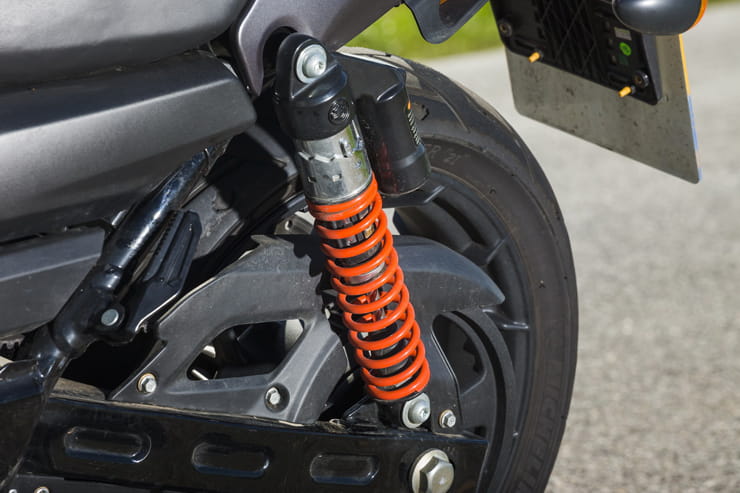 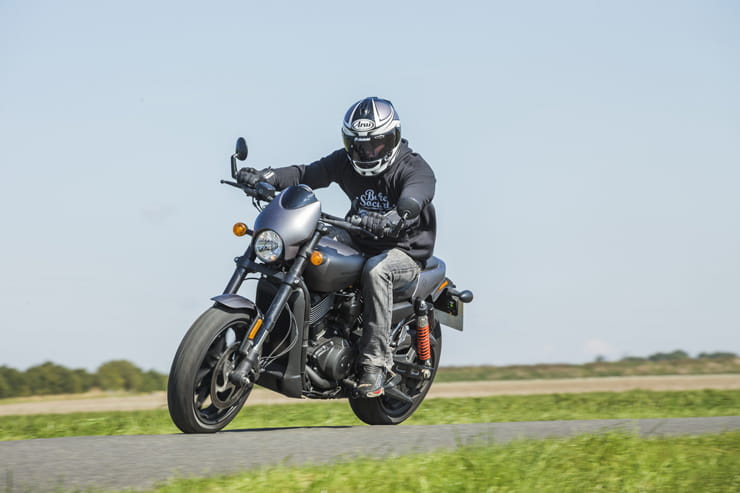 I’ve been riding the Street Rod for about three weeks now, clocking up around 1000 miles. Riding back roads and country routes, motorways and through town, I’ve used the bike to commute the 120 mile round-trip from home to work. Granted, it’s not how most people will use the Street Rod… 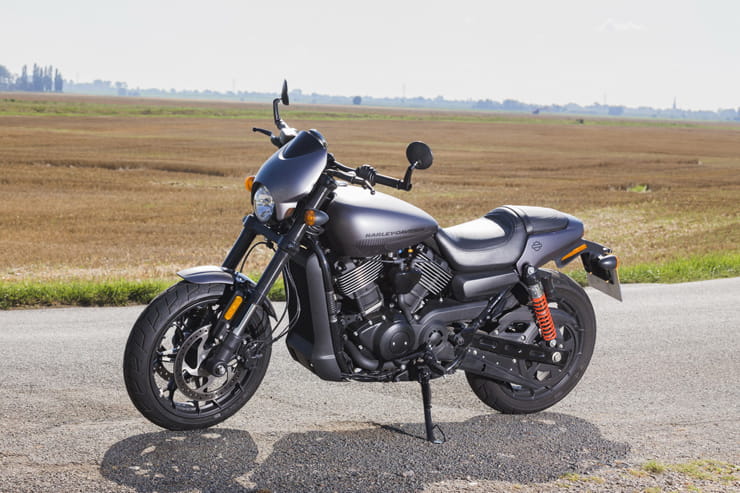 Harley-Davidson’s Street Rod uses an updated version of the company’s entry level the Street 750 engine, which has more aggressive cam profiles and a higher compression ratio. The claimed torque figure increases from 44lb-ft to 48lb-ft, and being a Harley, the power output is kept a mystery… a little digging though, and I can tell you it’s claimed to make 69.7bhp @ 9000rpm – 20% more than the Street 750.

So what does this mean?

Well, the Street Rod gets up to motorway cruising speed really quite quickly. The torque is very useable, and even in fifth and sixth gear you get a satisfying shove up the road when you crack the throttle open. The only real negative I can say about the engine is that it doesn’t have that unmistakable Harley-Davidson sound. For the most part it sounds like any other 750cc twin-cylinder on the market. There’s the option of having the bike ‘Stage One’ tuned though… the addition of a fuel pack, full exhaust system and free-flowing air filter should hopefully deliver that Harley-Davidson sound.

I really expected the bike to vibrate much more than it does, and while the footpegs do hum a bit above 60mph, there is no major vibration. I was hoping for that H-D lumpiness…The wide ‘Drag’ style handle bars are almost completely vibration-free.

The gearbox has a long throw and makes a satisfying clunk it engages, giving the impression that the cogs are the size of dinner plates! All six ratios make the most of the Street Rod’s tractability; first is short, and the bike rewards short-shifting through the box as you leave the hot hatches at the lights wondering what the hell happened. 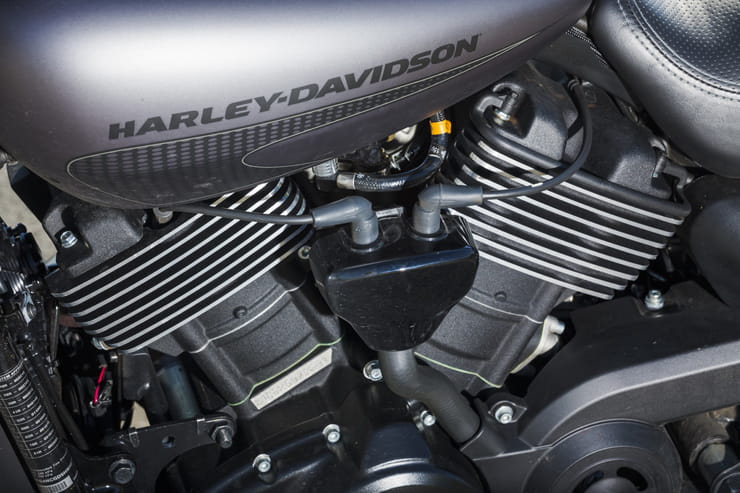 The front suspension is a set of black anodised upside-down 43mm forks that look great set against the matt finish tank and black wheels. They’re quite firm on UK back roads and can become unsettled if you open the throttle too much mid corner, but as long as you understand the limitations of the bike they do hold a line well and mean you can actually carry quite a bit of corner speed.

The rear suspension is piggy-back shocks with adjustable pre-load and, as with the front forks, is a bit on the firm side for me; pot holes cause a jolt to the lower back and on a couple of occasions large road undulations threw me up out of the seat.

The wide bars make moving the bike around in town quite easy, though I do find on full lock they’re a bit of a stretch. I’m 5’7” and right on the limit when using all of the Street Rod’s tight turning circle. 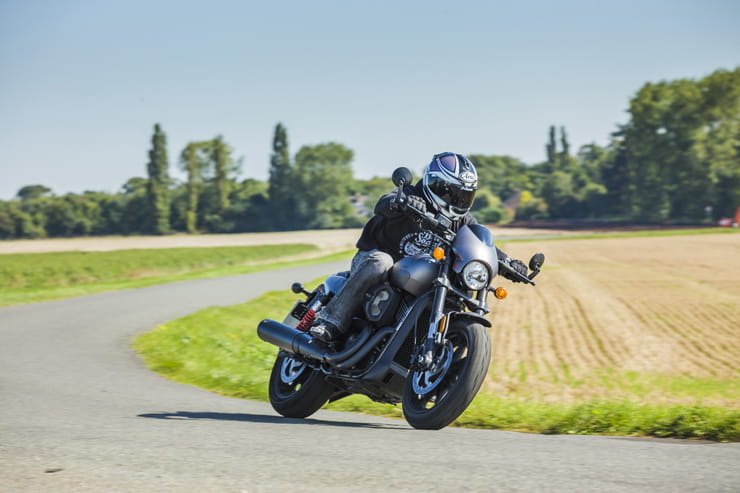 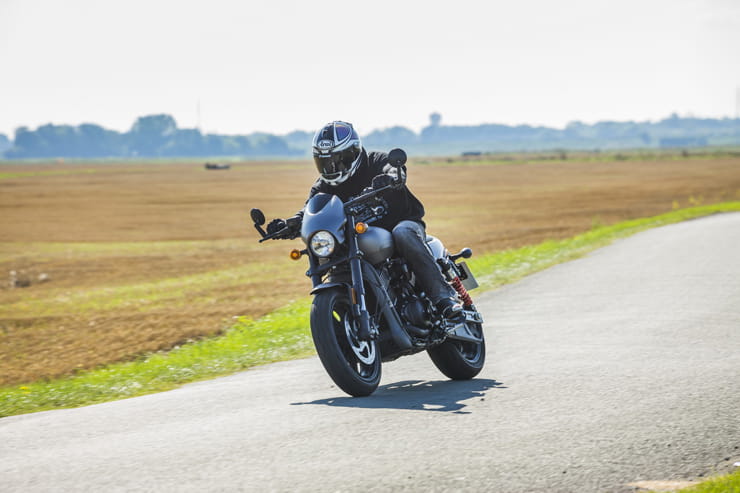 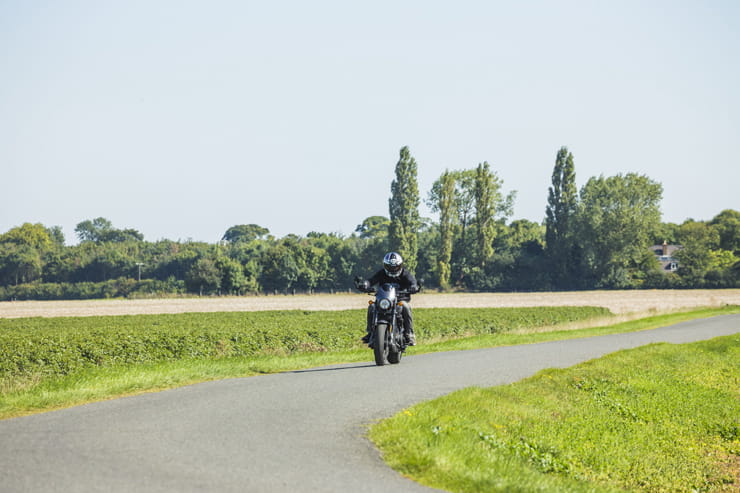 One of the good things about riding so many different bikes in such a short amount of time is the challenge of gaining experience… trying something new that means adapting my riding style is a good thing. The Street Rod was no exception.

The Street Rod has higher footrests than its Street 750 sibling – to help the bike’s sporty credentials, the exhaust of the Street Rod is lifted slightly to enable a lean angle of 37.3° in right handers and 40.2° on the left side. The result is that the footpegs are not totally lined up and at the same height; the right one is mounted slightly further forward than the left one, which at first I found annoying.

It took me about two days and a couple of hundred miles to get used to the riding position, and I still occasionally catch my foot on the footrests when moving off, which causes the peg to flick up. Not normally a problem, but the Street Rod’s pegs are not spring loaded. Remember to flick the peg down again or you’ll be waving a leg around in the air with nothing to lean it on! 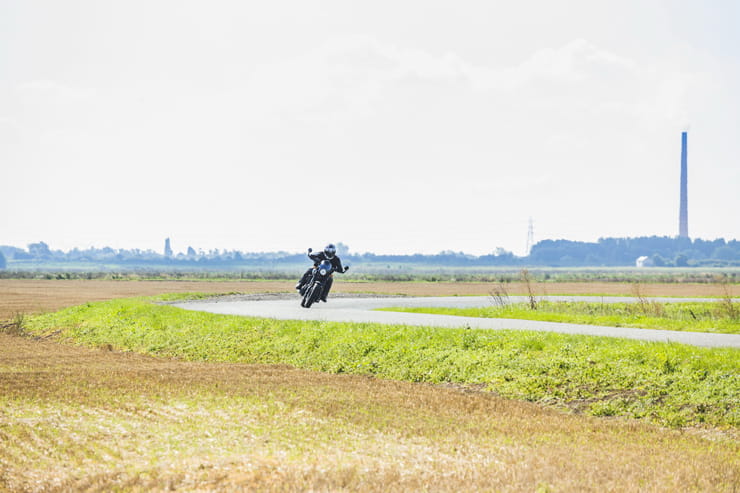 The Street Rod hoops are Michelin-made, branded Harley-Davidson. Called Scorcher ‘21’, with a front 120/70 R17V and rear 160/60 R17V, the compound used is quite hard and you can sometimes hear a chirp from the rear when changing down through the gears aggressively. Likewise, the front will also cry when you really push on – the pulses from the bike’s ABS are likely to be compounding this. The turn in is good, the bike being surprisingly flick-able. It really belies the 234kg weight when fuelled up.

The Street Rod has twin 300mm discs up front, shrouded by what look like Harley-Davidson’s own twin piston calipers. Its only closer inspection of the rear brake reservoir that gives the game away – the brakes are manufactured by ByBre. This is not a bad thing as ByBre stands for By Brembo, a subsidiary of Brembo that shares it’s years of experience in these budget stoppers that are beginning to pop up on bikes from KTM, Honda and now Harley-Davidson. The 300mm front brakes have loads bite and haul the bike up really well. The rear brake is a single disc and single piston caliper. The rear disc is huge and gives plenty of feel when when moving the bike around town.

The ABS on the Street Rod is not as intrusive as some systems I’ve come into contact with... In the wet I’d much rather have that safety net than not. 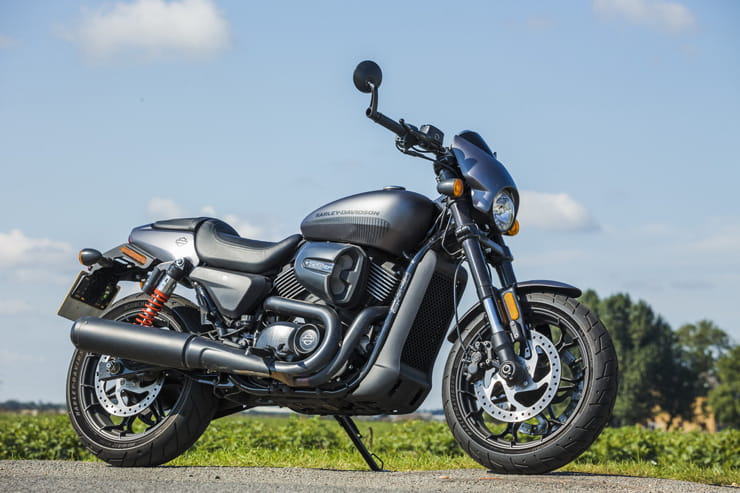 This, I feel, is the Street Rod’s trump card; it looks awesome! The matt finish on our ‘Charcoal Denim’ colour test bike is perfect and makes the bike look aggressive, so much more than its sub £7k price tag. The black wheels, engine and suspension further add to the moody styling – chrome isn’t for everyone, is it?

There are some detailing issues that once seen cannot be unseen, like a weld on the back of the tank that’s in full view when you walk up to the rear of the bike – it jumps out at me every time. Why that couldn’t be flattened off prior to painting I don’t know. 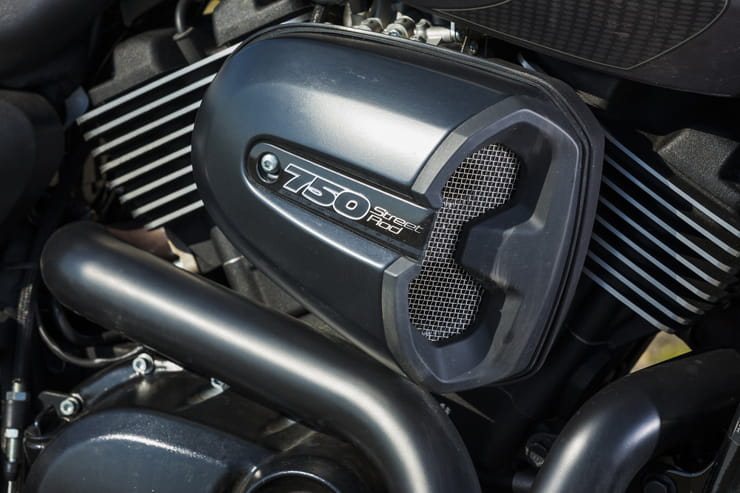 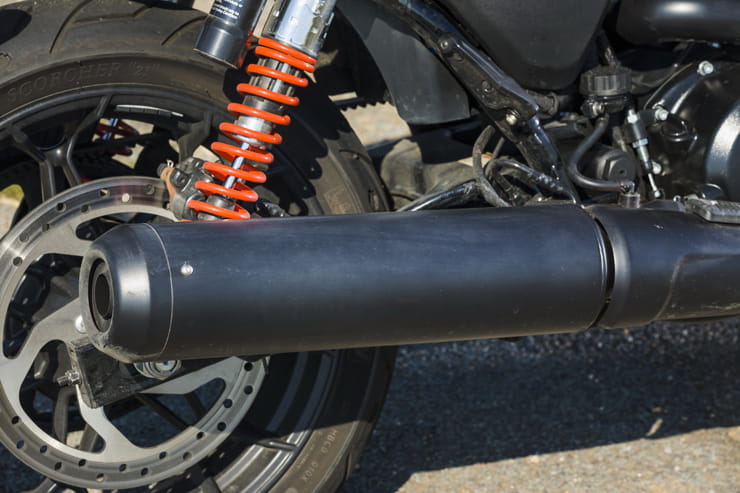 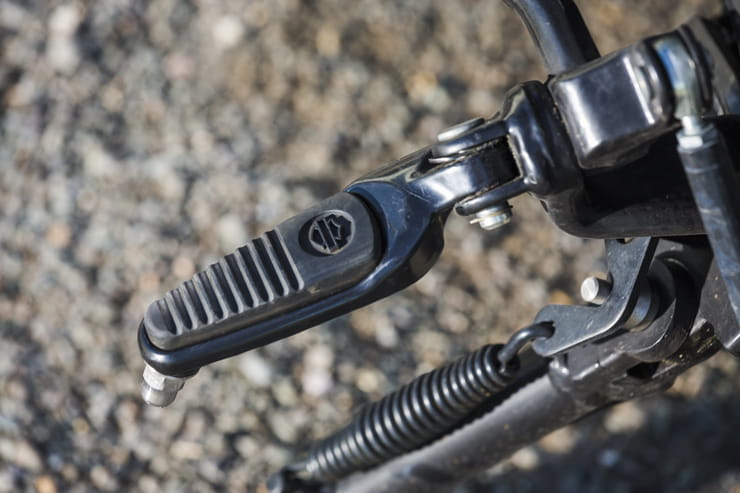 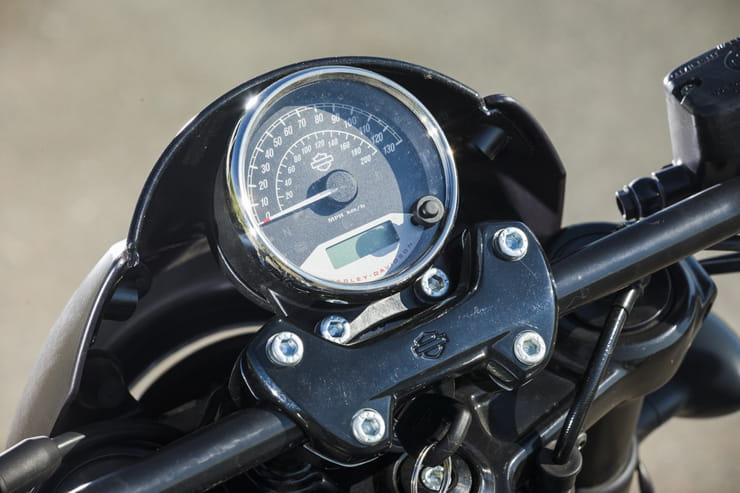 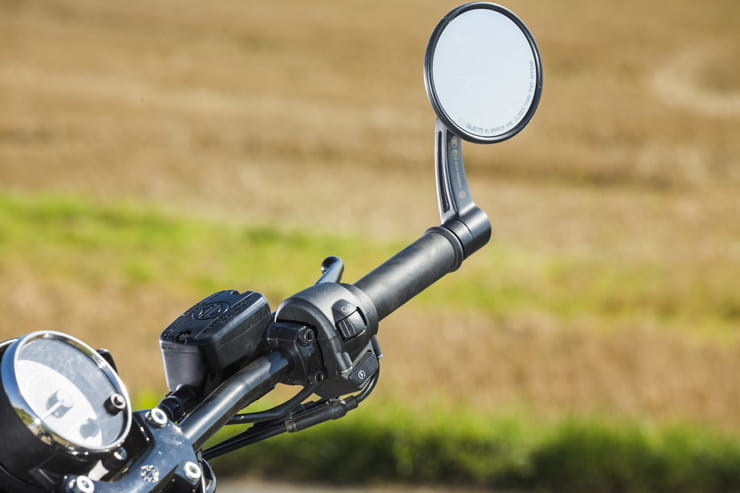 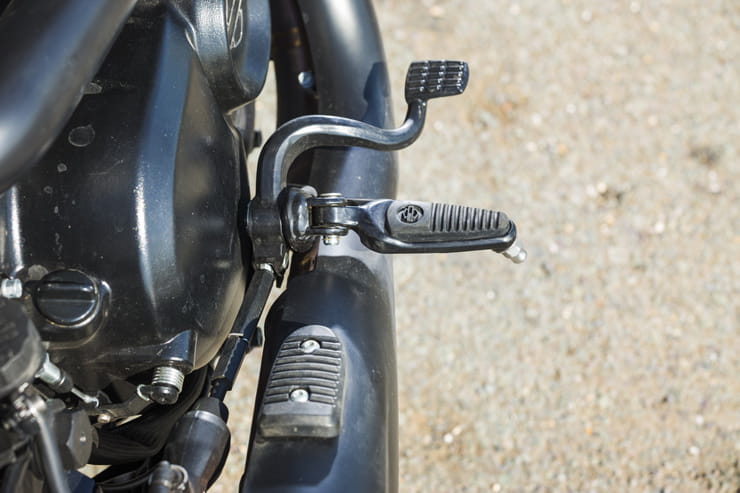 Controls and other features

The ‘Rod is pure cruiser so there’s no on-board trip computer here or navigation system here. A speedometer, a couple of trip meters, neutral light, oil pressure and indicators are about all you get and to be honest, that’s all you need. The only thing missing in this respect was a headlight flasher switch. To flash the light you have to flick them on and off again. It’s not a great hardship but for £6745, is a headlight flash switch too much to ask for?

There’s a small liquid crystal display below the speedo that you can use to show your gear, RPM and time. In truth I haven’t even used the other options and have just kept the trip meter on to keep a track on my tank range.

You can squeeze around 13 litres of petrol in, and the reserve light comes on after about 110 miles of ‘spirited’ riding – I didn’t take any chances and always filled up shortly after that. The tank is pure Harley in design, with a shallow and curved profile and a top so wide you could eat your dinner of it – lovely. 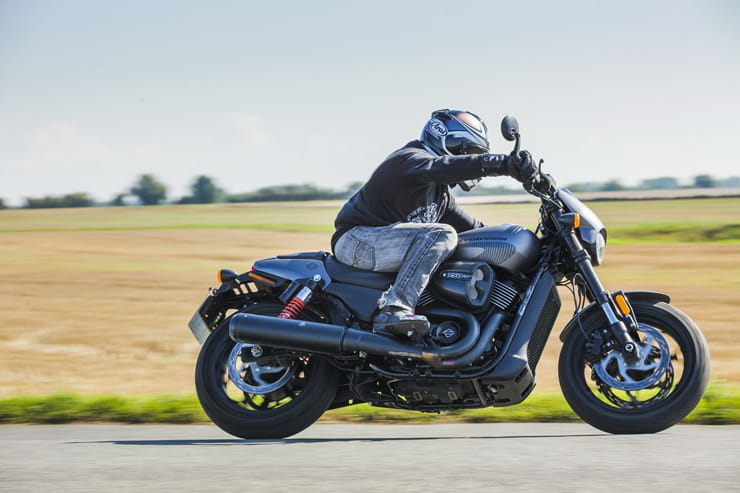 The Street Rod is a great bike; but regardless of what I think, they’re surely going to end up in the arms of owners that will either love and cherish them for years to come, or ride for 12 months then move up to the bigger motorcycles in the range.

It does have a few niggles that will either require adaptations to your riding style, or you’ll just have to learn to love them – it’s a Harley after all.

At £6745 the Street Rod is £750 more than the base model Street 750, but I believe you get so much more for that money. To my eyes, the Street Rod is the bike that every Street 750 owner wants their bike to be. And I’m willing to bet that there are a few that will be queuing up at Harley dealerships up and down the land to have a look at a trade in… 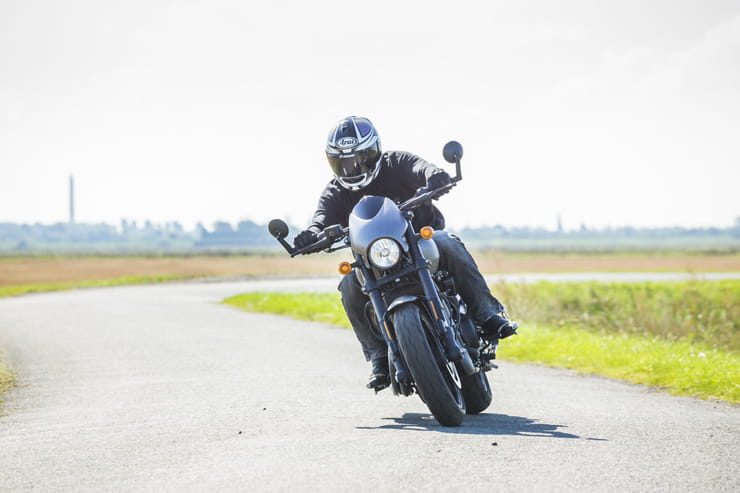