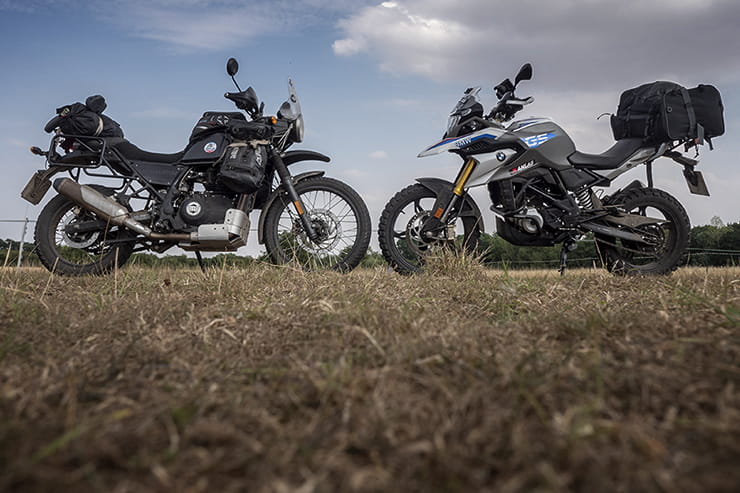 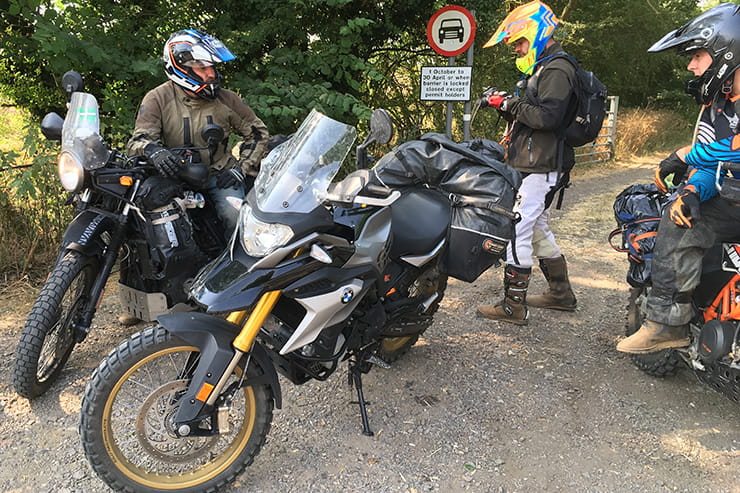 What makes a great ‘adventure’ bike? I’d say it’s simply a machine that allows you to easily ride the roads you want. To get the biking experiences that excite you. For me, that means a motorcycle that’s very capable on the road, and that can tackle some trails. But nothing too tough; I’m just being honest about where I’ll be riding.

But some might want a bike that’s as capable off the road as it is on. Or more so. They might want to be able to carry loads of kit, and extras like a centre-stand could be particularly valuable.

There are plenty of motorcycles that can do a lot of this, but what if you want something a bit lighter? What if you have a tight budget? Two Indian-built machines – the Royal Enfield Himalayan and the BMW G310GS – potentially appeal to quite different needs, yet are relatively affordable and manageable. Both of these make compromises, but buying one over an R1200GS for instance would leave you with at least £6,000 to spend on a big trip.

So which is for you? As an inexperienced trail rider who knows I’ll spend 90% of my time on the tarmac, I joined round-the-world adventurer Nathan Millward to compare the BMW and Royal Enfield over two-days of road and trail, from Northampton to Wells-next-the-Sea and back. We had to carry all we needed for a night’s camping, and we had the support of Rally Raid, who’d lead us on the varied and stunning tracks across the East of England… 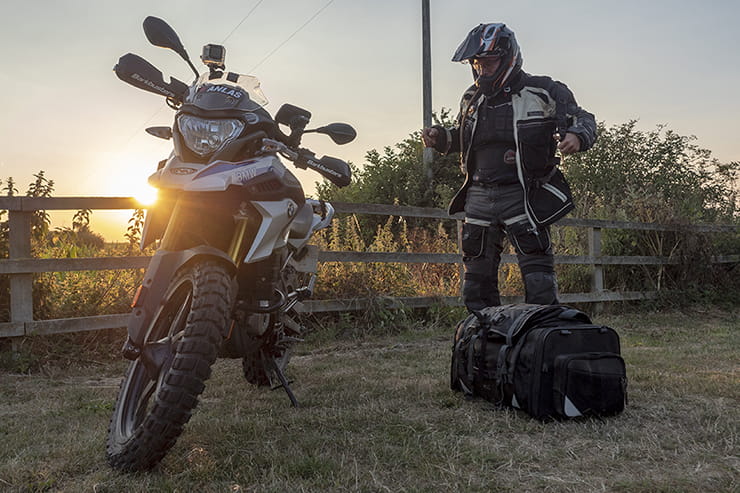 The case for the BMW G310GS

At almost £1,300 more than the Royal Enfield, the BMW really needs to prove itself. I’ve had one on loan for the past six months, and besides a couple of flaws, I’ve been really impressed.

Would I buy this? As a KTM 1050 Adventure owner, with a Honda Grom as well, I couldn’t afford a third bike. Would I replace the KTM with it? Probably not, but only because so much of my riding is on the road. Before I’d ridden the BMW, I’d bought the Honda as a toy for – among other things – exploring green lanes, so I’ve got everything covered. And being used to the speed and power of the KTM, I’d be hard pressed now to go for the BMW. But…

The KTM is becoming increasingly noticeably heavy, while the BMW is wonderfully light and easy to move around. I could also ride either of my bikes every day, but it’s the BMW I choose; if I have to pop into the city, it’s easy to carve through the traffic, and it’s no bother tucking into tight parking spaces, or getting it back out. With my Givi rack and top-box, I’ve got more than enough space to carry all I need, and despite the light weight of the bike, the handling doesn’t suffer.

While the suspension is quite soft and probably the most noticeably budget part of the BMW, on the road I find it fine. In fact, the way this bike handles on back-roads is absolutely superb – the engine needs to be worked, but keep the revs high and you can blast around twisty routes with a massive smile on your face. The brakes are great, so the only thing to know is that overtaking a car doing close to the speed limit takes a little more thought than on a machine with three times the power.

It’s off-road that the soft suspension becomes more of an issue, but only if you’re doing it a lot, and you know what to look for. As an inexperienced trail-rider, I found it fine.

On paper, the ground clearance of the BMW is the same as the Royal Enfield, but in practice it’s definitely higher – where the Himalayan would beach on some sections of the trail, the G310GS would scrape over. 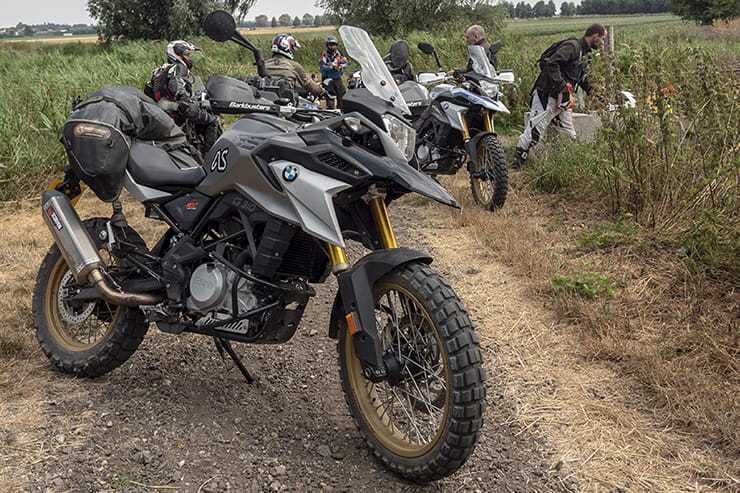 Rally Raid’s accessories for the G310GS can really transform it

So would I recommend buying one? Yes. It’ll sit at motorway speeds easily (85mph cruising speed is about the limit), and it’s an absolute joy on the road. It’ll carry all I need, and while some claim its single-cylinder engine is buzzy, I honestly haven’t found it an issue at all.

What I love about this motorcycle – if you can afford it – is the ownership potential; out of the box, it’s light, nimble and reasonably powerful (though that weight is high in the revs). If you find you want to get more serious with it off-road, Rally Raid has plenty of options that turn it into an extremely capable machine – its Tractive suspension, for instance, is a noticeable improvement if you find yourself exceeding the standard capability.

As it is, I’ve made a few tweaks to the bike – the most important for this trail ride was fitting a set of Anlas Capra X tyres, which gave me better grip in the loose and wet mud off-road than the standard rubber. I’ve also fitted some Barkbusters handguards and R&G crash protection – you can read about the mods here.

If you want something even cheaper though, that’s more dirt-focussed as standard (and you really need to carry more), it might be worth considering something else… 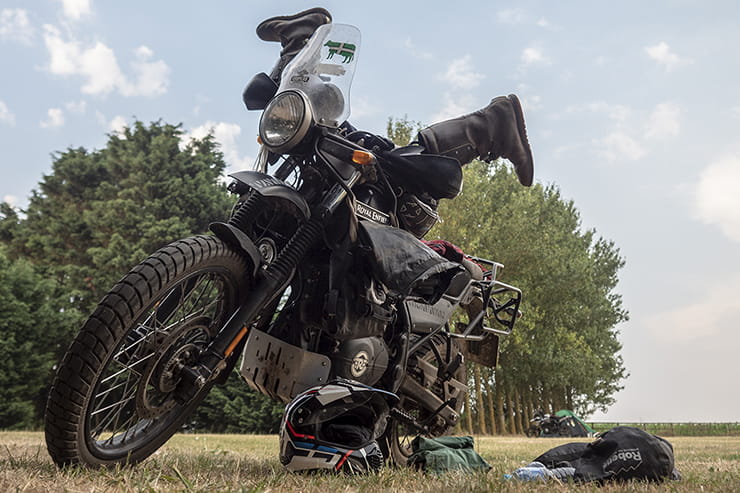 The case for the Royal Enfield Himalayan

“Riding the Royal Enfield Himalayan for the first time I was impressed,” says Nathan. “I’d bought the bike on spec, not even taking one for a test ride; I bought it out of intrigue largely. I’d heard good and bad things about it and was curious to see how it faired in the real world. The bike had just been launched in the UK and the price tag of £3,995 seemed too good to be true. So I bought one – a choice of black or white, I went for black – and set about putting 10,000 miles on the clock in the first six months.

“I rode it three times from Land’s End to John o’Groats, guiding groups of 25 other riders on each occasion, totting up 2,500 miles in 9 days on each trip. I also rode it on the two Bennett’s tours I organised for 2018; the road-biased Cornish Cream Tea Adventure, and the trail-based Welsh Safari.

“I’ve ridden the bike in all conditions and terrains. I’ve done a lot of trail riding on it, especially in the winter when I first got it. I’ve twice covered 650 miles in a day back down from John o’Groats. I’ve loaded the bike up and set pace ahead of bigger machines along bumpy A and B roads. I’ve thrashed it against other bikes (it’s quite similar in performance to a Honda CRF250L) and though when in a hurry the lack of pace has left me wanting that bit more than the 24.5bhp long-stroke engine has to offer, it’s the bike’s inherent capabilities – and versatility – that makes the case for the Himalayan so compelling. 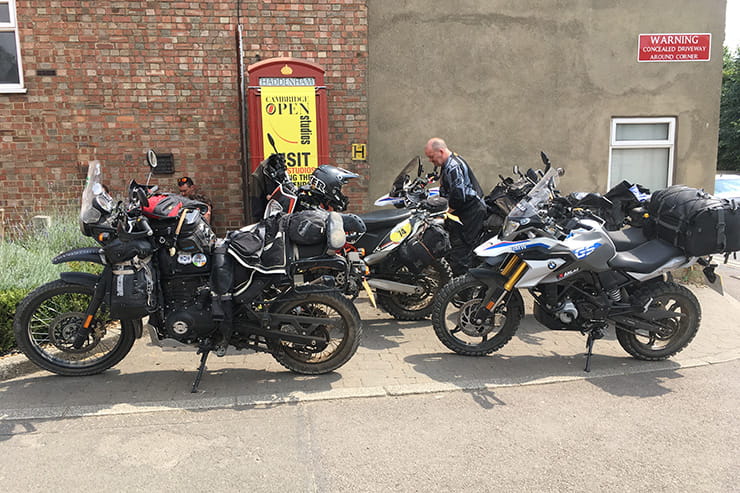 “I like that you get a centre stand as standard, that it comes with a rear rack (albeit one that won’t take a top box without strengthening), as well as front racks that are handy for distributing your load between front and back. I like that for £500 you can buy the additional aluminium panniers, which are perfectly sized and tailored to the bike. I like the comfortable riding position, the torquey long stroke engine, the riding position (stood up and sat down). I like the supple suspension that while softly sprung is well damped and allows you to make good progress along bumpy roads. I like that the bike crashes well, that it seems to stand up to abuse and feels solid and industrial enough to take you around the world.

“At 191kg it’s not light, but the weight sits low, making it manageable. Everything comes together to form a really nice, useable package.

“There are niggles. The side-stand is too long when the bike’s loaded up, meaning it can easily topple over the other side. The front brake lacks bite, requiring a good tug and a bit of back brake. The ground clearance could be better for trail riding, although if lifted you’d lose the manageable 800mm seat height. The screen could be taller and less buffeting, and in terms of servicing it’s annoying that at every 3,000 miles you’re supposed to have a valve check, with fluids changed every 6,000 miles. Having said that, I’ve skipped valve check services and found it needed just a touch of adjustment at the last service of 9,000 miles.

“On the plus side the bike is easy to self-service. Parts are cheap for it, and depreciation – currently – is minimal. The bike so far has also been without major fault, the only issue being tight and under-greased steering head bearings that needed re-greasing at 4,200 miles. Speaking to other owners reveals that there really aren’t any major issues with the bike, and I get the sense that the Himalayan is going to last the distance if you look after it and don’t expect it to offer superbike levels of performance.

“For me, of all the small-capacity adventure machines, it’s the Himalayan that offers the most comprehensive package of attributes. Some bikes are better in certain ways – the G310GS has more road speed for example, the CRF250L and Rally are better on the trails – but none arguably match the all-round package of the Himalayan, and certainly not at its current price.

“I wouldn’t replace it with any of the other rivals on the market. The only way to improve it would be a touch more ground clearance and five to ten more bhp.”

Battle of the budget adventure bikes