If you’re 16 and looking for some independent transport, there really is only one choice.

To get on the public roads at school leaving age, you’ll be restricted to an AM licence machine, which means that you can ride a moped on a provisional licence, subject to passing the compulsory basic training (CBT) and displaying L plates. You'll also need to get moped insurance.

With an AM licence, you're restricted to 50cc machines. The top speed for a 50cc moped is 28mph (45kph) which is what the law requires 50cc bikes to be restricted to. Although not fast, this makes 50cc mopeds fine for urban commuting and short trips.

For those looking to get onto two-wheels, the choice of mopeds on the market has never been bigger, or more bewildering. The rise in imports of cheap models from China means that a brand new scooter can be picked up for less than £500, while top end Japanese and Italian models can retail for almost four times as much.

To try and make sense of it all, Bike Social sent a team of three riders of differing experience to try out three popular models of differing prices from the wide range of 50cc mopeds currently available on the market.

In addition to me swapping my C90 for the mopeds on my daily commute, I was joined on the test by colleagues Sarah and Oli. Oli is a newly qualified rider who has been riding a wide variety of motorcycles since passing his test at the start of the year while Sarah rides a Lexmoto Valencia 50, and gave us a different point of view when evaluating the mopeds. 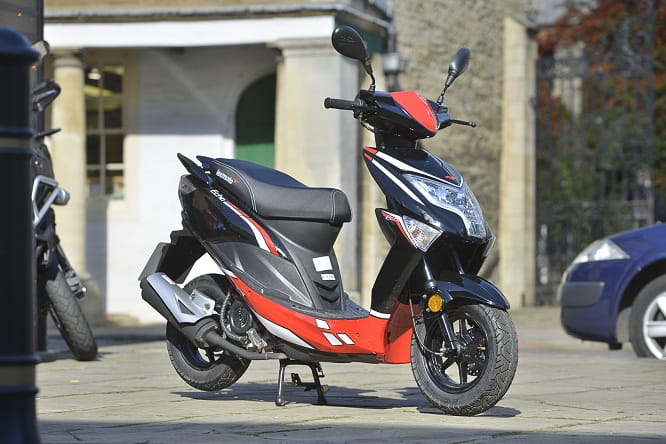 Lexmoto may be Britain’s third-biggest selling motorcycle brand, but interestingly they are not actually a manufacturer. Instead, the Devon based company imports a range of white labelled Chinese scooters from a variety of different manufacturers. So in actual fact the Echo is made by Longjia and indeed a look at the surprisingly well written handbook makes no mention of Lexmoto at all.

While the £749 Echo is the entry level model in our test, Lexmoto will actually sell you a cheaper bike (the aging £649 Scout). The Lexmoto is the sportiest of the trio in its styling, with yoofish graphics, neat LED running lights and angular lines. 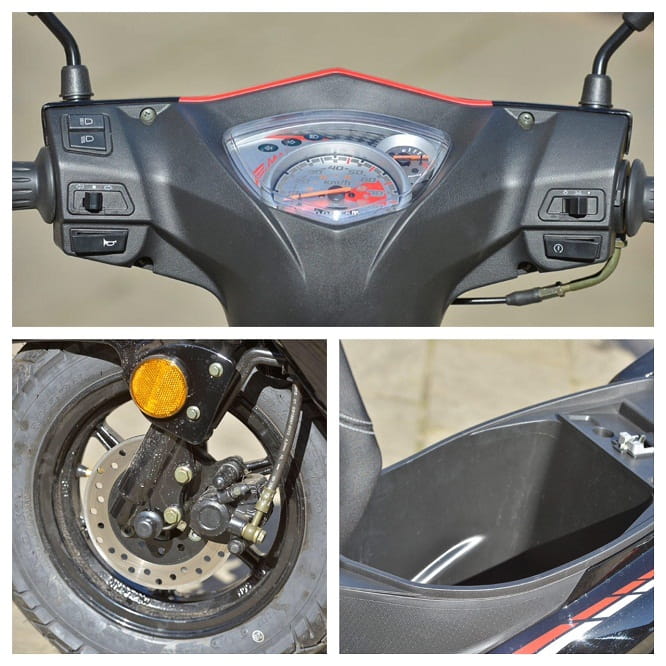 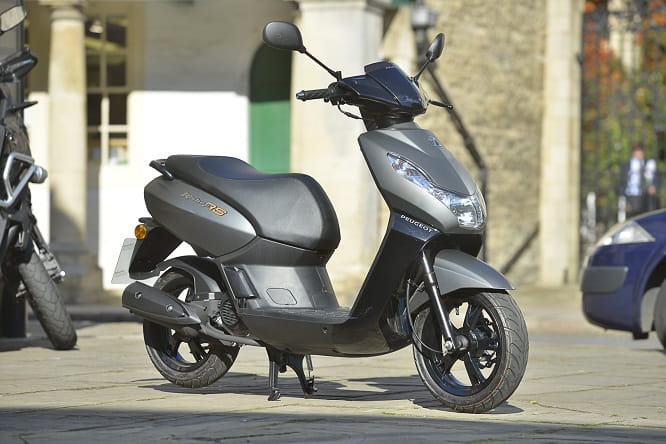 In the European corner we’ve got the Peugeot Kisbee. Coming in at £1199, the French manufacturer claims that it is the EU’s best seller and is the entry model in the Peugeot range. Although better known as a car brand these days, Peugeot have been building bicycles since 1830 and motorbikes since 1898, with Indian giants Mahindra recently acquiring a controlling share in the motorcycle subsidiary. A 100cc version is also available. 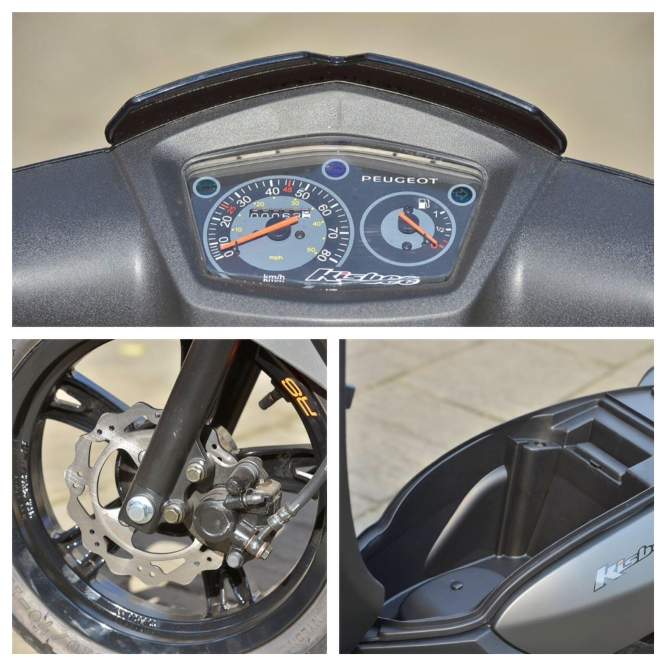 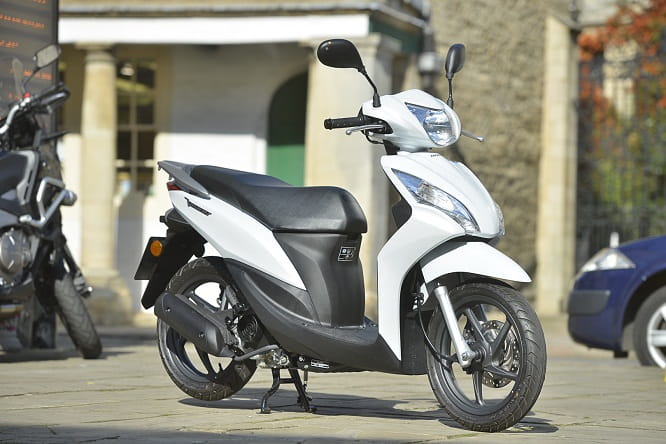 Representing the top end of the market is Honda’s Vision 50. The Vision name goes back to the boxy mopeds of the 1980s, but the latest NSC50 shares nothing except the name. At £1899 it is by far and away the most expensive of the trio and the only moped in Honda’s range. The test bike’s plain white livery feels classy, even a touch feminine, but the Repsol MotoGP replica option from previous years can transform the look completely. Also available with a 110cc engine. 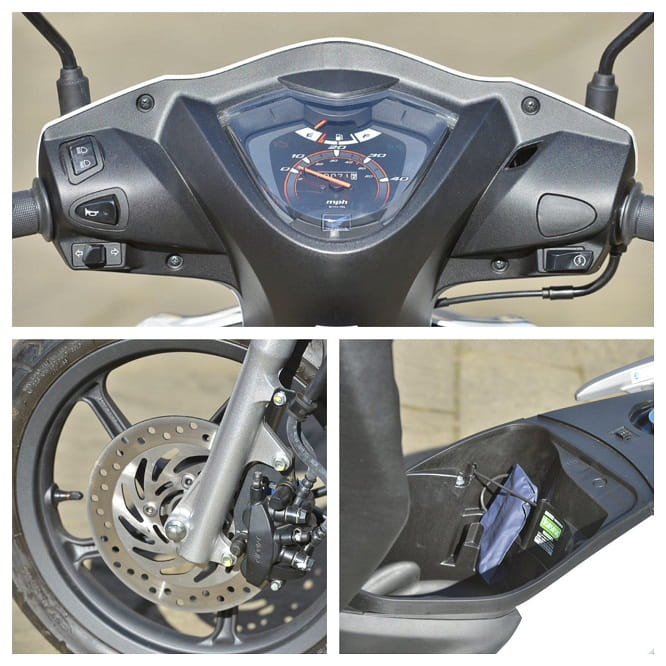 As mentioned above, according to the law, a moped is restricted to a top speed of 28mph (45kph). To that end, the Honda is the truest moped here. The Vision hits a hard limiter when the needle reaches the magic mark, where the other two seem to squeeze out a few extra mph in favourable conditions.

Overall, the Peugeot definitely feels the liveliest out of the three 50cc mopeds. Acceleration from standstill is the crispest of the three and with a long stretch of flat road the needle hovers around the 55kph (34mph) mark.

On a run, the Lexmoto can more than keep up with the Peugeot, although the Chinese bike is the weakest of the three away from the lights, and is also most affected by inclines in the road. Riding around backlanes (you’ll usually try to avoid main roads on these) and the Peugeot is the most fun and assured in its handling. The Lexmoto has the handicap of weak brakes and tiny 10” wheels (a 12” version is available for an extra £50) which can feel a bit skittish and harsh over bumps, but it’s certainly not anything to be concerned about. The Honda, by contrast, is something of an appliance. It’s a bit dull, but very competent and assured. The big 16” wheels give better stability than the others, as well as adding to the ride quality. It also has the most assured brakes, thanks in part to a combined braking system that keeps the scooter balanced under heavy stopping by automatically operating the front and rear brakes together.

It’s a big fail for the Lexmoto on this one, with the sloped saddle forcing the rider onto the very front of the seat and leaving no opportunity to move around when numb bum syndrome sets in. The ride is also harsher than the others, but not terrible when you consider the price. For me, the seat comfort was a real deal breaker, with Sarah finding the handlebar ergonomics particularly hugely off putting.

By contrast, the Vision 50 was an ergonomic delight for all three testers and also felt the most comfortable of the trio, no doubt due in part to larger wheels and quality suspension. No problems either with the Peugeot and its sumptuously padded seat, although we all felt that the shape of the saddle allowed for less moving around than the Honda’s.

On paper, it’s a big win for the Lexmoto here. At £749, nothing else on test comes close. It is cheaper to buy than an annual travelpass for the Tube, although fuel consumption was definitely the worst of the three and the 12 month warranty is half that of the others. Chinese bikes have also historically suffered from eye-watering depreciation and high-insurance costs, due to the lack of parts availability, however one would hope that the growing strength of the Lexmoto brand will improve that. The company has invested heavily in providing good spares back up and that should bode well for the future. Lexmoto claims that the Echo should represent a better investment than the other two, losing a smaller percentage of its value on the second hand market, although only time will tell.

Prices for Peugeot’s Kisbee start at £1199, with the manufacturer offering special finance deals at the time of writing, although the extra £200 for the (admittedly rather nice) matt grey RS version we tested seems a little steep.

By contrast, it’s kind of hard to justify the Honda’s £1899 list price. There is no doubt that it is a quality product though, with the dealer backup of the world’s biggest motorcycle manufacturer. Honda claims 146mpg from the Vision, and while we are unable to confirm that figure, we’d definitely say that it is the most frugal of the three. 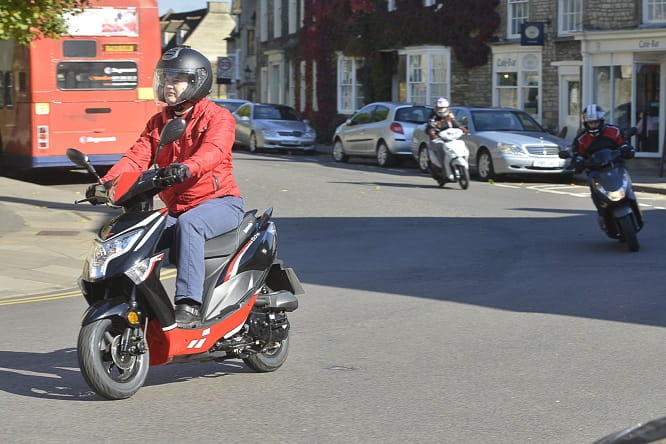 No quality issues with the Peugeot and Honda.

The Lexmoto does feel a bit budget compared to the others, but considering the price that's nothing to be ashamed of. Starting is not always the instantaneous process you have on the others and can take quite a few stabs at the starter button before finally firing, especially when cold. More troublesome is the inability of the scoot to tickover and occasionally, and too often, the engine will cut out when stationary at traffic lights and roundabouts. It is something that should be easily remedied but does suggest a quality control issue at both the factory and dealer PDI stage. Either way, it would seem that you do get what you pay for with the Echo.

In truth, the Lexmoto isn’t really in the same league as the Honda or Peugeot. At £750, the competition is more like a ratty Yamaha Aerox that’s already seen half a decade of action. In that context, the Lexmoto can more than hold its own. Personally, I’d rather have my 16-year-old kid ride around on a brand new bike with a year’s warranty, than an old banger with a dubious history. It has its flaws and is a bit rough around the edges, but I’m pretty sure it won’t fall apart like Chinese bikes of the past. It’s cheap and cheerful, rather than cheap and nasty. You could certainly do a lot worse.

But the battle between the Honda and Peugeot is a close run thing and as much a matter of personal taste and bank balance. The Honda is a Honda, enough said. It starts, stops, steers and sips very competently. It leaves any pretence of excitement at the door, but it’s ever so classy and you can be sure that there’s a dealer in every town, should the legendary Honda reliability ever let you down. It might be more expensive to buy, but resale values and frugal fuel consumption should make that gap a little less harsh than it appears on paper. My colleague Sarah fell in love with the Vision and declared it her ‘ped of choice, even if us boys yearned for the extra performance of the other two.

The Peugeot has a whiff of Gallic flair and is Europe’s best selling moped for a reason. The motor is the zippiest of the trio, particularly off the bottom end. Dynamically the chassis is more than up to the job, with strong brakes and composed handling. The standard Kisbee comes in at £700 less than the Honda, and that represents a lot of gear for a newbie rider. It’s comfy too, but not quite as practical. Unlike the other two, there’s no side stand, or storage compartments inside the fairing, but it certainly feels more youthful. Oli and I both gave it our seal of approval, declaring it more fun and better value than the ever faithful Honda. 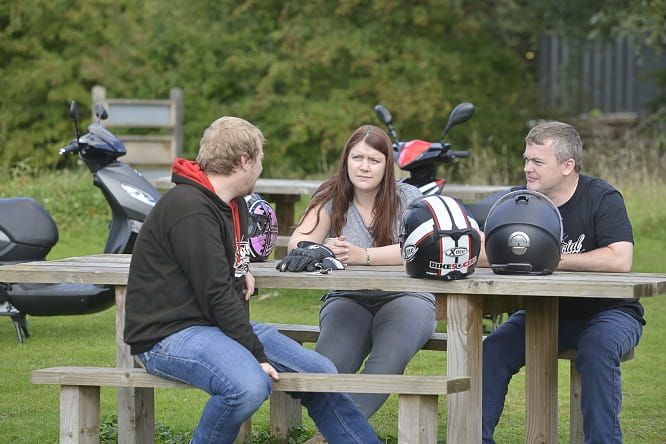 As a Lexmoto owner I had high expectations on the Echo but felt let down. Unlike my retro styled Valencia, the riding position on the cheaper Echo forces you to sit so far forward that it feels like your elbows are resting on your knees. The distance between the handlebars and the brake levers was too far for my short hands and I ended up with cramp after every braking attempt. The ride itself was quite harsh and I felt every bump on the road, although this might be improved if you can go for a model with bigger wheels (which costs an extra £50 – Ed). It’s an ideal scooter if you are willing to sacrifice some comfort in return for getting from A to B on a budget.

The Peugeot has a much softer ride; even on bumpy roads I barely felt it. Compared to the Lexmoto you can tell from the quality of the mirrors to the indicator button that the bike has a higher price tag. The bike was comfortable to ride and easy to use (no cramping on this one) I did however notice that after a few minutes the seat itself was forcing you forwards this did cause a slight issue with the position of the mirrors. The seat on the Peugeot was wider than the Lexmoto and I can image if you are going more than 10 miles distance that this would start to get uncomfortable. Apart from that it’s a well-rounded little 50cc scooter ideal for pottering round town.

The Honda gets top marks on all elements, the quality of the bike, comfort, ride and even storage. It was the slowest of the three and took a few seconds more to reach its top speed, but I was that comfortable I didn’t mind bringing up the rear. The Vision glided over bumps with ease and steering round tight corners on back roads felt effortless. The Honda also didn’t have a forced riding position I could sit as far back or forward as I liked and not once did I find myself having to adjust myself back like I did with the other two.