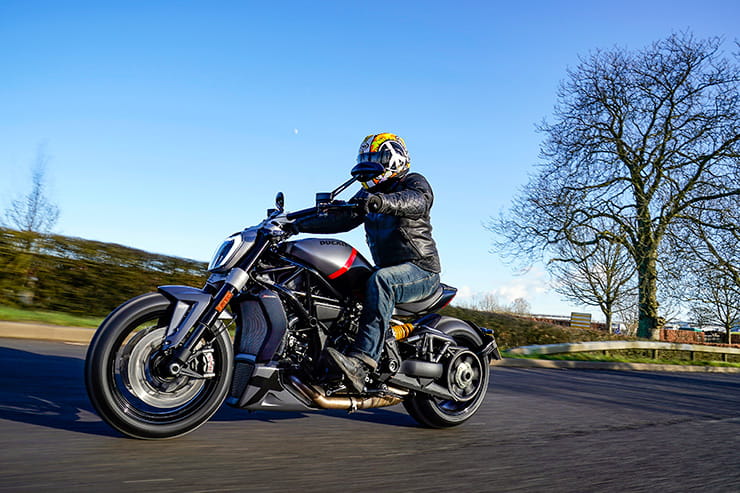 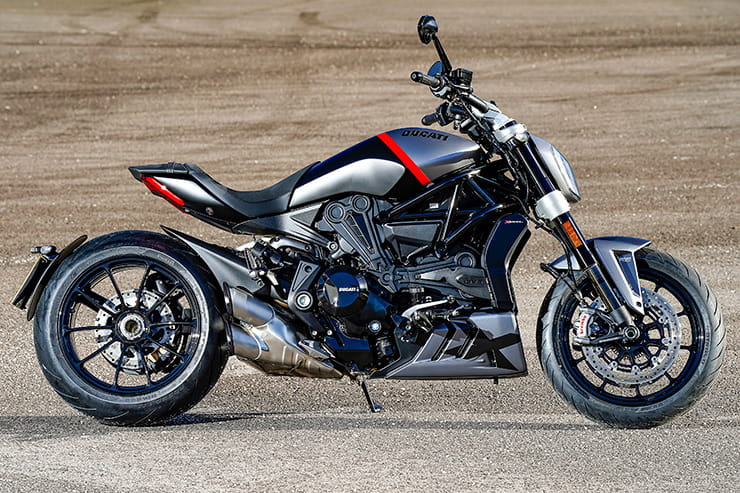 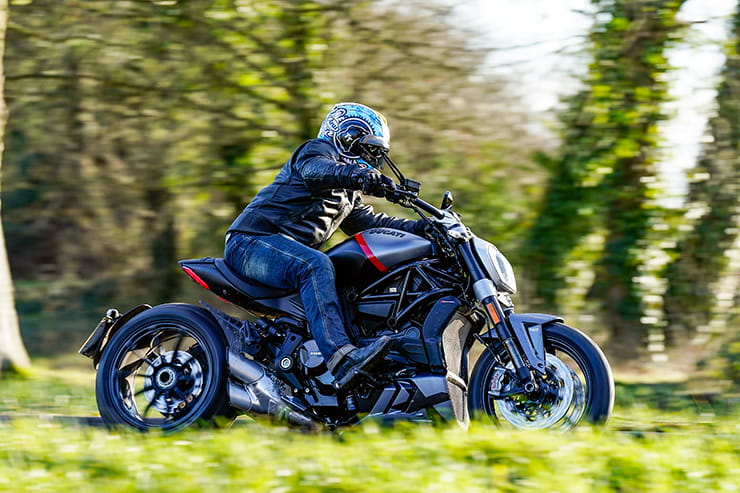 Ducati’s XDiavel range receives a makeover for 2021 and becomes Euro-5 compliant, with a new exhaust and revised fuelling. Ducati has also taken the opportunity to introduce two new models either side of the S in terms of spec; the basic Dark and the top-spec Black Star, which highlights the sporty side of the feet-forward Ducati cruiser. We’re told the Black Star is inspired by the world of sports cars, which explains the livery. The glimpses of red are a nice touch, and be sure to check out the red DVT cylinder heads.

Aside from these cosmetic touches and an increase in power for the now Euro-5 complaint Testastretta 1260 (actually 1262cc), the Black Star features lightweight forged wheels, saving 2kg. Other highlights are improved Brembo M50 calipers, DLC coated adjustable forks like the S version, and a ‘high-grip’ suede fabric seat with dedicated upholstery (on the Black Star model only).

The all-new XDiavel Black Star is certainly eye-catching and couldn’t be any further away from a traditional feet-forward cruiser. Ducati launched the Diavel in 2011 to widespread applause from the press, and then went feet-forward in 2016 with the XDiavel. Ducati’s new cruiser promptly kicked sand in the face of the traditional V-twin cruiser market with sporty handling and impressive power, brakes, and technology.

For 2021 Ducati move the goalposts even further with even more power and torque and sharpened sportiness. And then we have the looks. The new Black Star is one of those bikes you can just sit back and admire ­– while its finish is outstanding.

It took me a while to appreciate the detailing, I even had to get down on my hands and knees to see the red front cylinder head. The all-new exhaust now exits over the huge 240-section rear Pirelli tyre, rather than protrude outwards. I couldn’t wait to take the new Black Star for a spin: feet-forward cruising has never looked so stylish or fun. 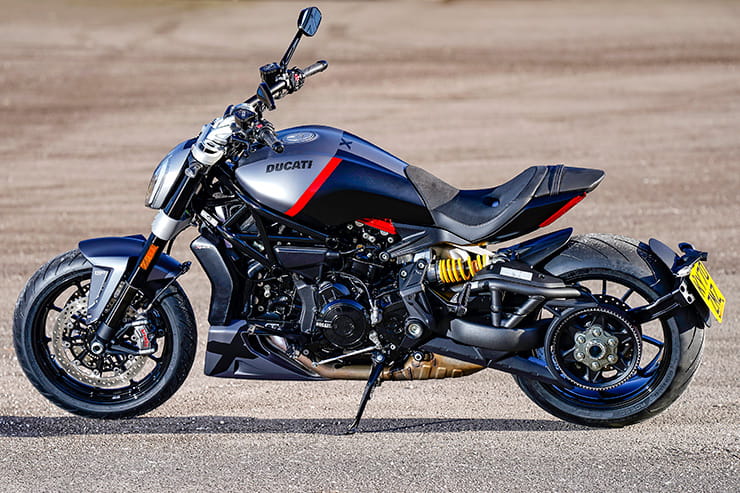 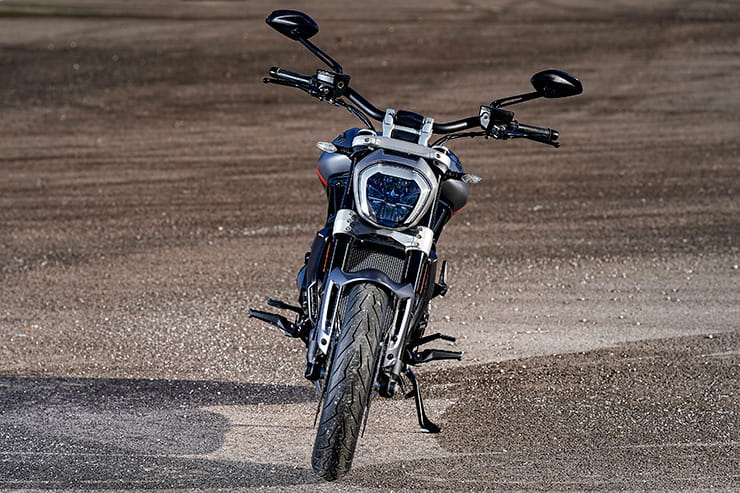 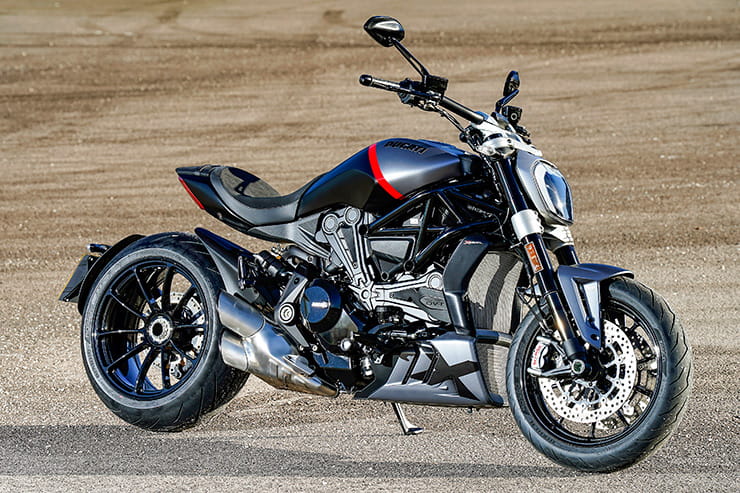 When I review expensive and exotic bikes such as this, I have to put myself in the seat of a potential customer. For me, a tight northerner who will drive a few more miles to save a few pence on fuel, £21,000-plus is a huge amount of money to spend on a bike, no matter how desirable. But for the average XDiavel customer, possibly not.

The standard, XDiavel is £16,995, the S version is £20,695, and the bike we have on test, the top-spec Black Star, is £21,295. Though at £269 per-month on PCP, it does become a little more appealing. According to the accessories catalogue, the lightweight wheels are £1756 alone, so in theory you are saving money buying the Black Star over the S.

When comparing the XDiavel Dark with the competition, its price is certainly in the right ballpark. Triumph’s recently updated Rocket 3 starts at just over £20,000 and Harley-Davidson’s basic Fat Boy is £16,995. The Harley may be considerably cheaper but it can’t match the Ducati’s power, handling or technology, and it’s all-too-easy to add a few accessories to the Harley which will quickly bring the price closer to £20,000. So I guess when you look at the competition, the XDiavel is reasonably priced… isn’t it?

While some manufacturers have struggled to meet Euro-5 regulations, losing power in the process, Ducati has actually increased peak power and torque for 2021 and made the XDiavel’s torque curve much flatter as well as slightly fatter. Peak power now stands at a mighty 158bhp @ 9500rpm, which is 8hp up on the previous Euro-4 model. Peak torque has also increased, although not as significantly, to 94lbft @ 5000rpm, up 1.5lbft. Tellingly, Ducati’s dyno charts comparing the new and older bikes’ outputs reveal much smoother power and torque curves, with fewer peaks and troughs, especially in the mid-range. 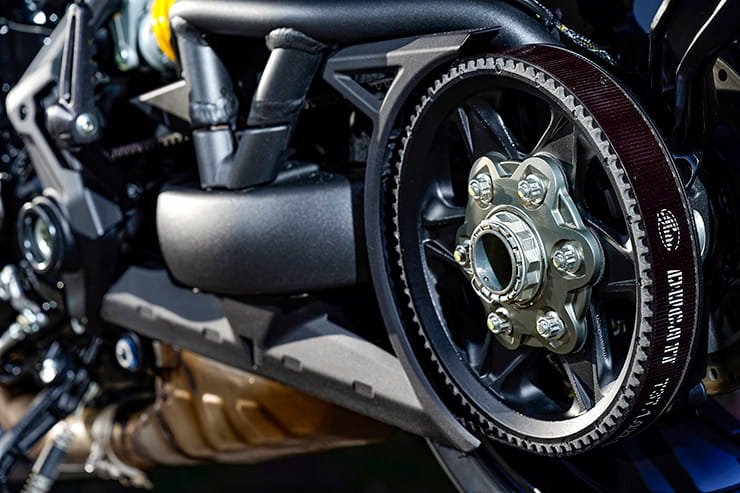 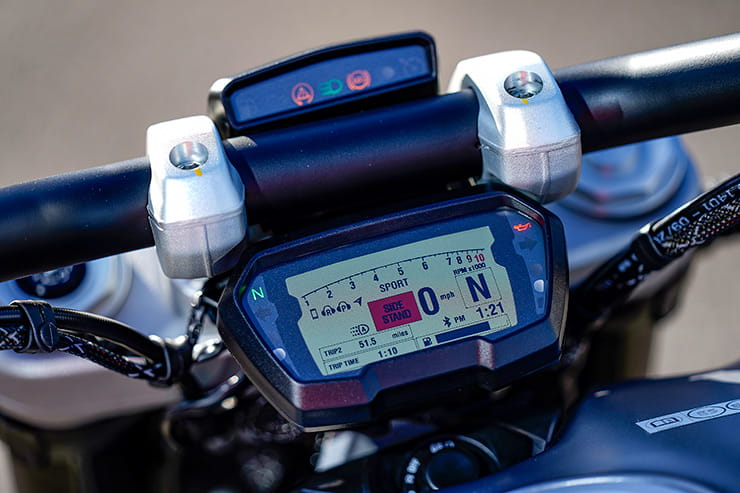 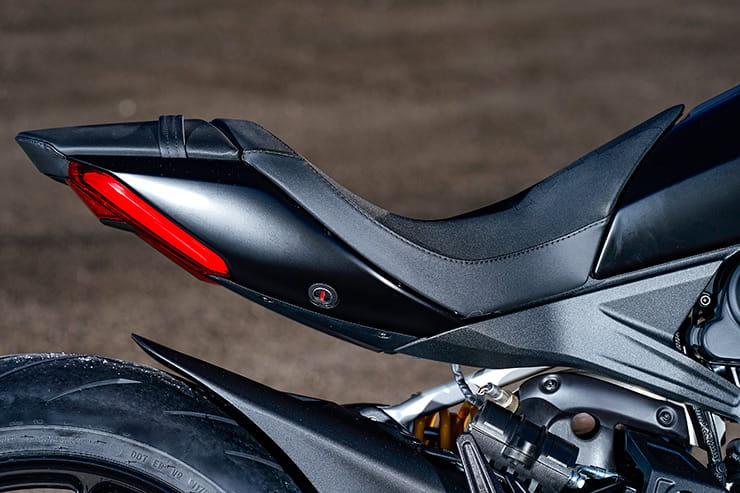 The new exhaust now protrudes towards the huge 240-section rear tyre. That balloon-like Pirelli sends out a clear message about the power and intent of this feet-forward cruiser: that this isn’t a slow-revving, laid back American V-twin but a thoroughbred Italian – and all those horses want to run.

158bhp from the DVT V-twin?  That was race-winning power in World Superbike a couple of decades ago. Now it sits in a cruiser; has the world gone mad? And it’s not all about peak power because torque is immense, producing around 70 to 75lbft of torque at just 2000rpm. In fact, the XDiavel produces more peak torque than Ducati’s legendary 916 at only 2000rpm. Just think about that for a moment.

In tricky conditions, I sensibly opted for the safe Urban mode, which reduces power to 100bhp, and increases the rider aids such as TC and corning ABS. But even in Urban mode is has more power than most Harleys, so you still need to be cautious. Once I was feeling a little braver, I switched for the less sensible Touring mode, which gives full power and reduces the rider aids.

Full power is massively impressive from the DVT motor, sending the traction control into overtime to control the rear wheel. Torque hits you like a tidal wave in almost any gear. You don’t really need to rev the XDiavel; just sit in the grippy suede seat and try to hold on as you stretch that belt final drive.

I spent the majority of the test treating each junction or set of traffic lights like a mini drag race. That butt-clenching power really gets to you – it’s mightily entertaining. There is even a dedicated Ducati Power Launch (DPL) if you want to be particularly immature. In Sports mode, when the rear tyre eventually hooks up, it even has enough grunt to lift the front, something I wasn’t expecting from a long and low feet-forward cruiser. This is a quick bike, and I know from previous experience that the XDiavel feels planted and solid at high speeds, but that at 140mph-plus it’s hard work keeping your feet on the pegs.

But, away from tearing up the rear tyre, all that torque makes the variable valved engine incredibly usable. It potters around in any gear and accelerates hard out of 30mph zones, even in a high gear. As mentioned, the XDiavel produces more torque at 2500rpm than most sports bikes but that didn’t stop Ducati increasing its output further for 2021 although, in slightly tricky riding conditions I didn’t really feel the extra oomph. However, the power felt smoother than I remember, very progressive. Only a back-to-back test will let us know for sure.

I spent a lot of the time flicking between modes, controlling the power and torque with a button as much as the throttle. I flicked into the Urban mode when grip levels became tricky and lent on the electronic rider aids. This did highlight one issue: the small dash. Yes, it is full-colour and TFT, but I’d like something larger, more obvious, and not hidden away under the wide bars. In today’s world, we are used to generous iPad-size screens that are easy to read – and which the XDiavel clocks are not.

Comfort is excellent. Embarking on some serious miles shouldn’t be an issue, just forget about a pillion – they would have to miniature and brave. The riding position is adjustable, and I opted to have the pegs closer to the seat, while taller riders may prefer the pegs further forward. Ducati claims 51mpg, whereas I managed 47mpg. I know from experience that can soon drop with some heavy throttle action, but most riders are going to average close to 50mpg, with a theoretical tank range of around 180-190 miles or 150 miles before panic sets in. Again, it would be nice to have a larger clock and display... 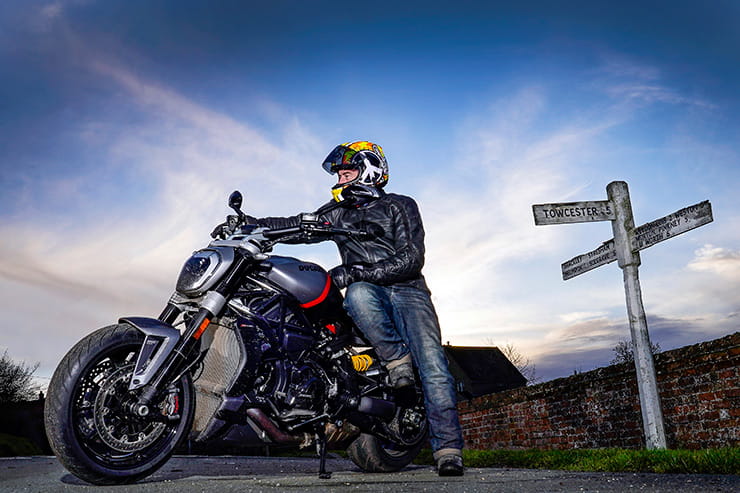 It shouldn’t work. A long wheelbase, relaxed rake and trail, and a huge rear 240-section rear Pirelli – all the ingredients are there for a bike that just wants to go straight. But the XDiavel handles and goes around corners far better than its spec sheets suggests and would embarrass any traditional V-twin cruiser.

Light forged-alloy wheels on the Black Star make a significant difference as they save on un-sprung weight, which allows the XDiavel to steer with more fluidity, especially at speed. The suspension is composed, it controls the bike’s weight well, which, at 221kg dry, is considerably lighter than the competition. The handing is emphatically market-leading for a feet-forward cruiser. It’s firm, yet still doesn’t jolt you out of the seat over imperfections.

At slow speeds, however, the XDiavel initially doesn’t want to turn, then with some input slowly rolls over its large rear tyre. Around town, where you will inevitably spend some time posing, the Black Star is okay, but only in the way a plastic knife is okay for cutting up steak. Better to leave the town behind and enjoy the fast-flowing open road, which the new XDiavel loves.

The new Black Star features the improved Brembo M50 set up, the same as the sporty S model (as opposed to the M4.32 items on the standard Dark model). Braking is also complemented by the Bosch-Brembo 9.1MP cornering braking system, which is linked to the IMU – the brains of the operation which controls all the electronic rider aids. This set-up gives you immense confidence, and again the stopping power is class leading. Some cruisers can feel a little vague on the brakes, with lots of weight driving forward and raked out steering reducing feel, but this isn’t the case with the XDiavel. However, I was thankful for the cornering ABS in the slippery conditions on the test. 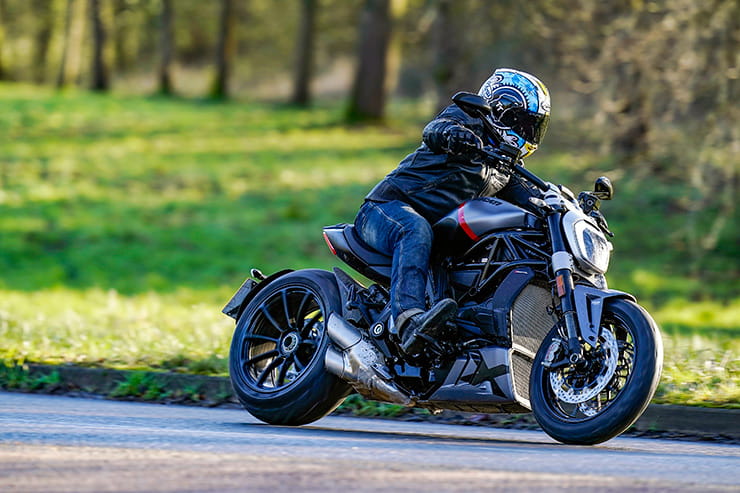 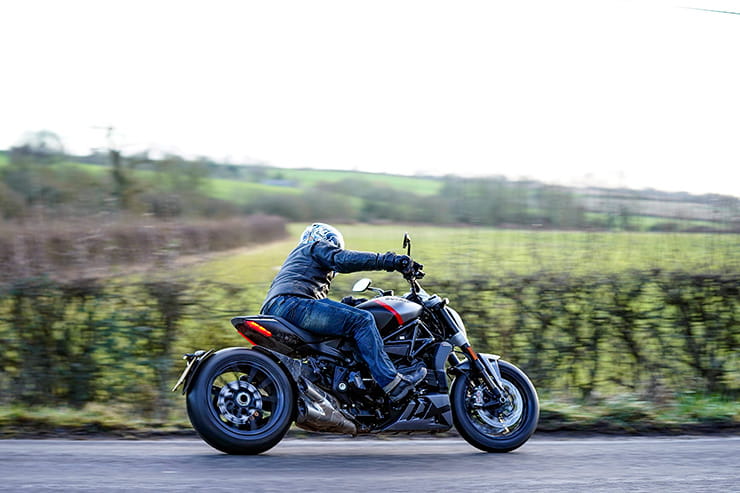 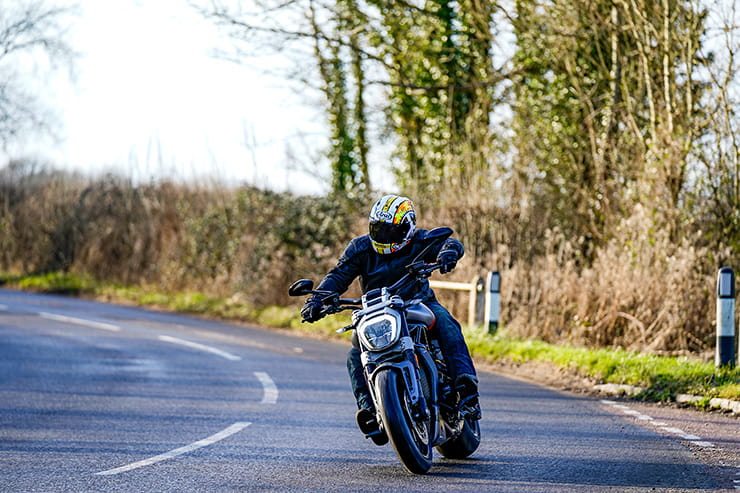 As you would expect, the Black Star has the full complement of rider aids and three riding modes: Sport, Touring and Urban. There is Ducati Traction Control (DTC), Ducati Power Launch (DPL) plus the aforementioned cornering ABS. Cruise control, keyless ignition (annoyingly not the fuel cap), DRL headlight, backlight switchgear and Bluetooth connectivity add to the practicality and flair of the XDiavel Black Star.

If you are feeling flush, accessories are plentiful. Racing silencers will set you back £2325, centrally mounted pegs, £835. There is a host of carbon goodies, most of them expensive, with a front hugger for example priced at £375. Start ticking some accessories boxes, not to mention some clothing boxes too  –  the Downtown leather jacket, for example, is a snip at £470 – and your final bill could go much higher than £21,295.

The XDiavel is almost like no other cruiser on the market, and only Triumph’s much heavier Rocket 3 is on par in performance terms. The new Black Star iteration looks stunning in the flesh – mere pictures don’t do it justice. It feels special, looks special, and I felt guilty getting it dirty.

Ducati didn’t need to give the XDiavel 1262cc Testastretta more power or improve its handling with lighter wheels, but they have. Performance is impressive from tickover, while handling, stopping and electronic rider aids are class-leading – and did I mention the looks?

This is a stunning feet-forward cruiser, albeit one that might be a little too extreme for some. Forget about the lack of pillion seat and that the dash is not really up to 2021 spec because, on PCP especially, the Black Star just about delivers on its price. 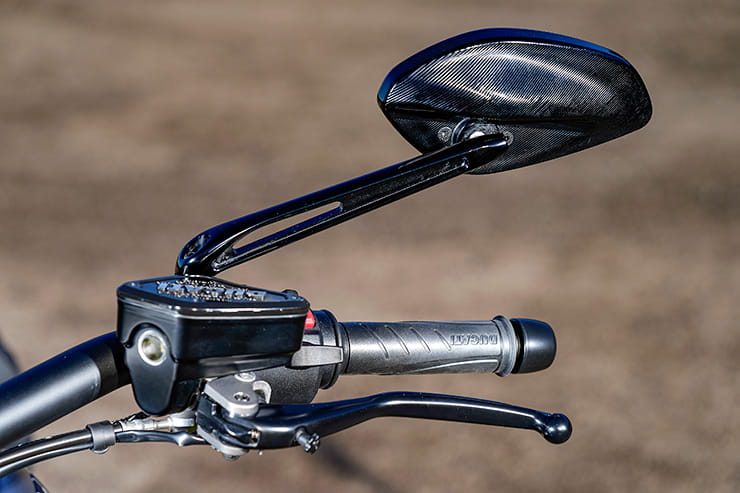 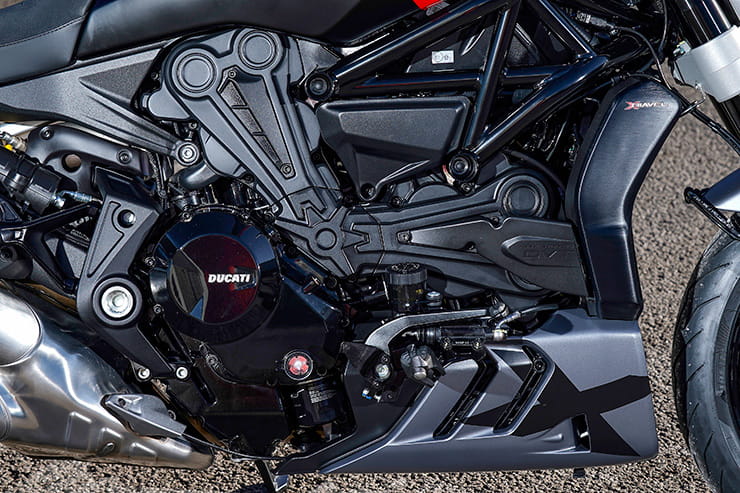 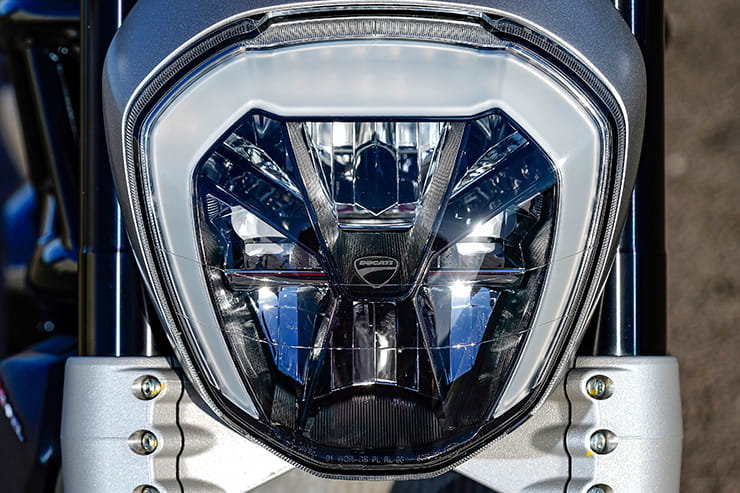 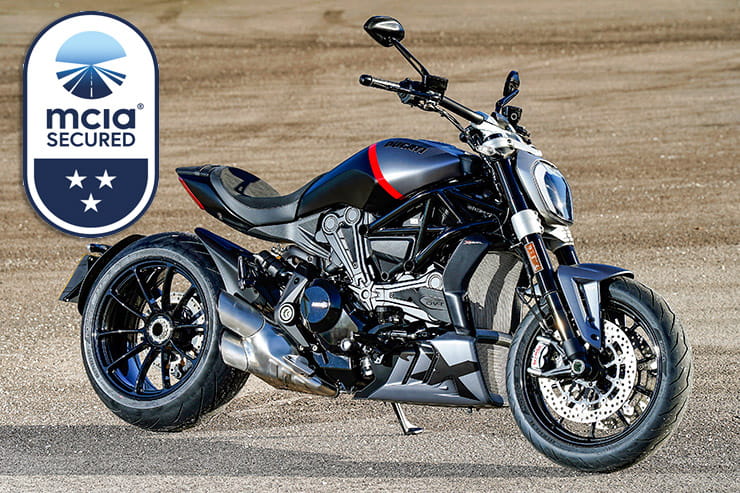