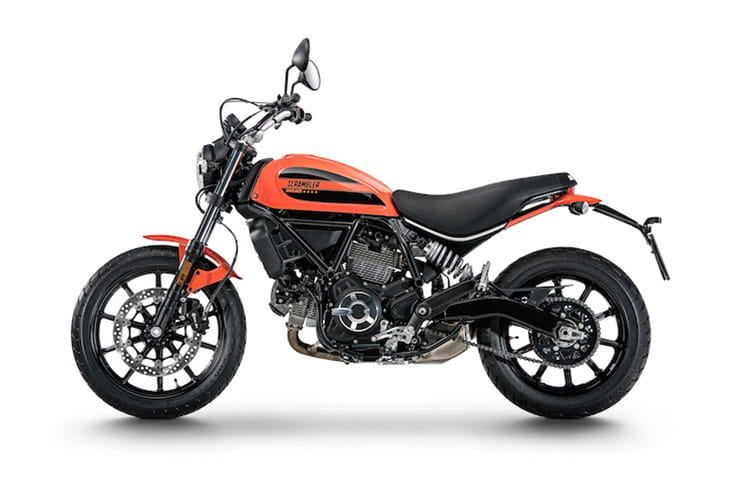 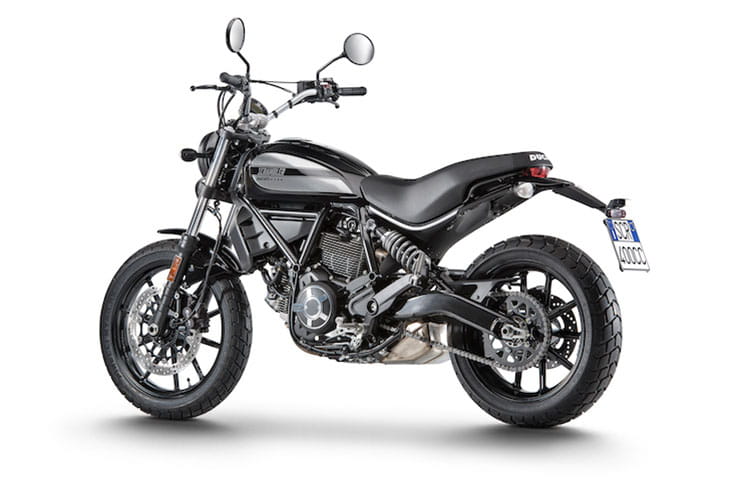 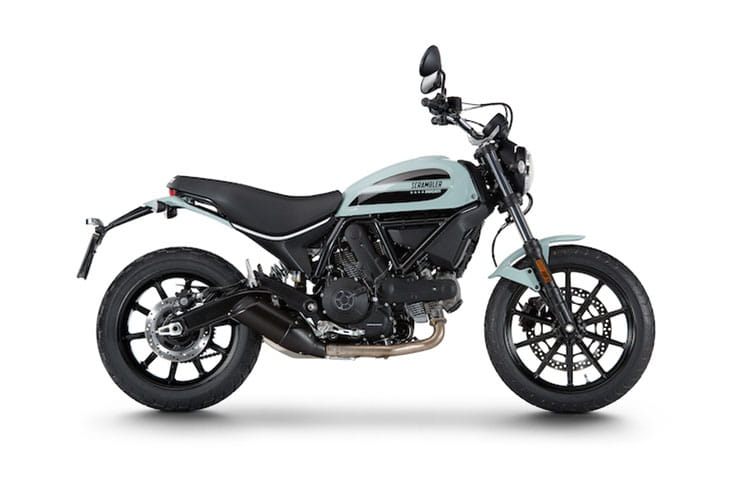 There was some cool stuff going on back in 1962. The Rolling Stones were formed, Sean Connery starred in 'Dr No', the first James Bond movie, and a youthful Mike Hailwood won his first 500cc world title for MV Agusta. Meanwhile in Bologna, Ducati began production of the Scrambler, the versatile single that would inspire the firm’s latest and most popular family of bikes.

Fast-forward almost half a century, and Ducati is aiming to recapture some of that youthful 1962 vibe by naming the latest model in its reborn Scrambler family, the Sixty2. With a capacity of 399cc and maximum output of 41bhp, which means it can be ridden on an A2 licence, the Sixty2 is even more firmly aimed at young riders and novices.

Despite the capacity/power cut, however, you might struggle to notice the other differences. The rest of the Sixty2 follows the Scrambler format closely, using the same tubular steel frame but keeping things simple with a steel tank that abandons the bigger models’ detachable side sections. It also has softer suspension at both ends, with conventional instead of upside-down front forks. And its single front brake disc is smaller, down from 330 to 320mm in diameter, and gripped by a twin- instead of radial four-pot caliper.

As a result, you’d expect the Sixty2 to be the cheapest of Ducati’s Scrambler line up – and it is. When launched, the Sixty2 cost £6450 in either of its three colour options (orange, grey or black), which was £800 less than the cheapest of the bigger Scramblers. But that was also more expensive than similarly retro-styled rivals such as Harley’s Street 750 and Yamaha’s XSR700 – and over a grand more than useful A2 class rivals including Honda’s CB500F and Yamaha’s MT-07.

Obviously as a used buy it’s cheaper still, although there aren’t that many out there. But you should still be able to pick up a decent, used example for under £5K which, for a proper Ducati V-twin, is tempting. 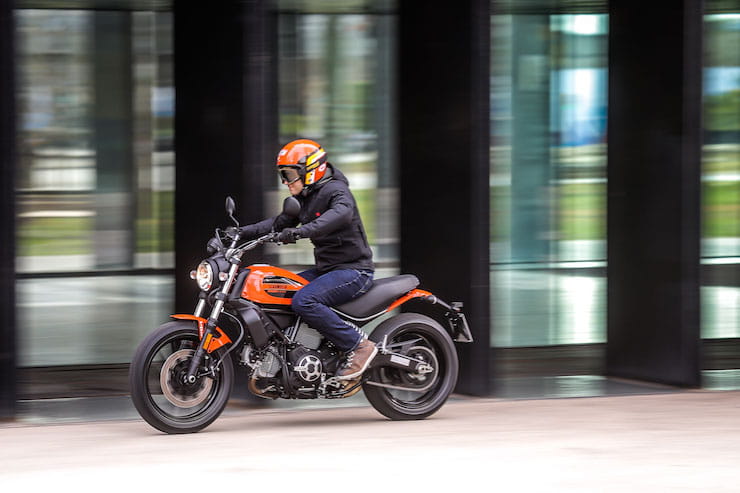 Performance is respectable enough, provided you don’t want to ride too far or fast. The Sixty2 was happy on the streets of central Barcelona, where most of the launch ride took place. Its clutch action was light, and the Ducati pulled away easily, picking up speed smoothly with a faint thrumming from the stubby, black-finished silencer on its right side.

The was a little bit of snatchiness on closing then reopening the throttle but the response was slightly smoother than that of the bigger Scrambler. Out of town the Sixty2 held its own without threatening to get particularly exciting. Acceleration at low revs was pretty flat. But the Ducati perked up at about 6000rpm, feeling reasonably lively from there until it reached its limit at about 10,000rpm, with a flash of warning lights and a slight buzz through the footrests.

Flat-out it’d get to an indicated ton or slightly more, and would cruise at the legal limit, which is about as fast as you’d normally want to ride for long given the upright and exposed riding position. Even so, that 41bhp output means it hasn’t quite got the legs of some purpose-designed A2-class bikes such as Honda’s CB500F, which make up to 47bhp.

The Sixty2’s engine is a small-bore version of the 803cc, aircooled desmo V-twin that powers the bigger Scrambler models. It shares some bottom-end parts, and gets its capacity because 400cc is a popular licence class in some countries. There’s six-speed gearbox and the exhaust is a similar, low-slung, two-into-one as the larger Scrambler models.

Reliability should generally be good as, being a low-capacity twin there’s little to go wrong, Ducati reliability is generally very good these days and the Sixty2 is an under stressed, lower performance version of a proven motor.

That said, some early models were affected by a recall due to problems with the side stand so, if buying used, check the modification has been made. 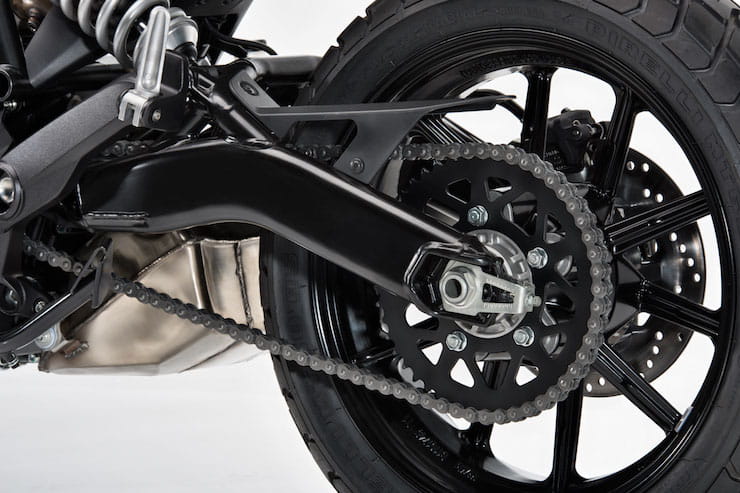 Again, because the Sixty2’s a lower performance and capacity version of an existing, twin cylinder engine, fuel economy is pretty good. We averaged around 60mpg during our test and higher still should be possible resulting in a range of approaching 200 miles for the 14-litre fuel tank.

The Sixty2, as it’s a more budget, novice-targeted version of the bigger 800 Scrambler, has downgraded, softer suspension at both ends with conventional instead of inverted forks. On top of that its rear tyre is a narrower 160 instead of the bigger versions’ 180.

These changes, along with the fact that, at just 183kg with fuel the Sixty2 is seriously light, all contribute to its impressive agility – as do its wide handlebars. On a brief thrash along some twisty and hilly roads near Barcelona’s Olympic stadium it could be flicked into turns with barely more effort than it had required to avoid sharp-turning taxis in the city centre.

The softened suspension is generally welcome in town, where it had copes well with the occasional pothole or sleeping policeman. It also held up pretty well on roads that never quite dried out fully, although it felt slightly vague in a few bumpy bends and is not really intended for traditional Ducati-style hard cornering. (In fact the Bolognese marketing gurus insist that it’s a Scrambler, not really a Ducati at all…). Overall, though, handling is good. 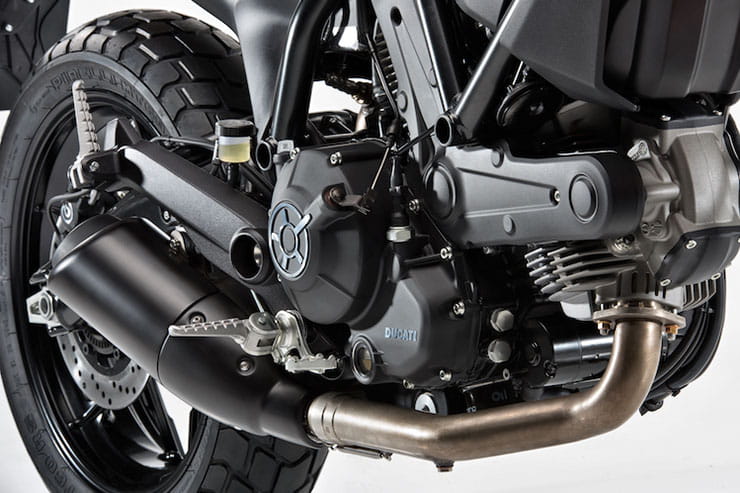 That said, it brakes with reassuring efficiency, despite that down-spec’d front stopper, although again the slightly damp road surface during our test meant that the ABS cut in before the Brembo caliper could use its full force.

Pirelli’s chunky MT60 tyres did a decent job of gripping the frequently slippery looking road surface, even though the 160-section rear is narrower than the bigger Scrambler’s 180.

Even thought the Sixty2 is smaller in some ways than the usual 800 Scramblers, its riding position is identical, which means a wide, high one-piece handlebar and a fairly thick dual-seat that’s 790mm off the ground, allowing average height riders to reach the ground easily enough.

As such it’s reasonably practical, although I found the seat slightly too soft, and not as comfortable as its generous width suggests it should be. There’s plenty of room for a pillion, along with hand-holds below the seat. With a chassis the same size as the larger-capacity Scrambler, the Sixty2 is a reasonably roomy bike, and felt bigger than some A2 class rivals.

Being an upright, unfaired machine also means, however, that it’s no real mile-muncher, becomes uncomfortable over prolonged motorway miles and there’s little room for luggage, either, so if you planning some big trips you’d be better off elsewhere.

Although a down-graded, cheaper version of the standard Scrambler 800, the Sixty2 hangs on to much of its bigger brothers’ equipment (around 70% according to Ducati) and detailing. As such the Sixty2 hangs onto the smart switchgear and swish round digital clock (although a fuel gauge would be handy). It also keeps the same swish round headlight with LED rim light, which doubles as a cool looking running light.
There are also marks of quality are peppered all over the bike and overall it still has a premium feel. Details like the Ducati logo on the grips, seat and and even the corny ‘Born Free’ engraving on the filler cap lift it above more budget rivals. Ducati also offers a huge range of accessories for all the Scrambler models enabling you to individualise it to a huge degree, although you do pay for the privilege. 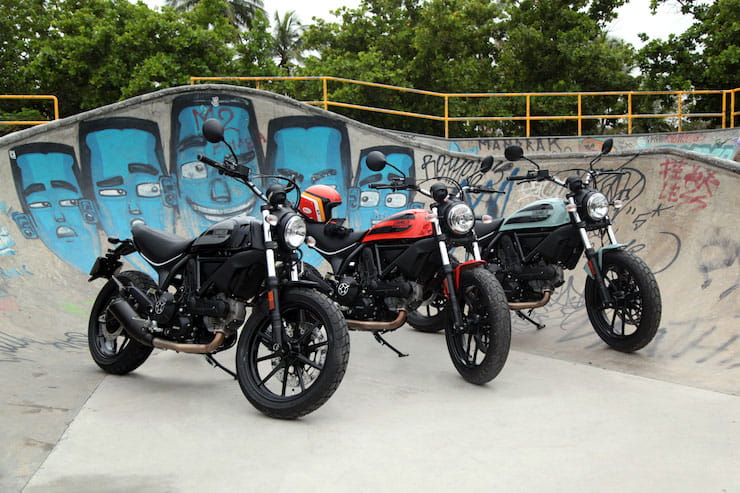 The Ducati Scrambler Sixty2 is a decent bike all-round, and a particularly stylish, classy one for novices. If you like its retro vibe and are looking for a simple, stylish, capable and rider-friendly roadster, the Sixty2 might well appeal.

Ducati’s main problem is likely to be that although they’ve tried to economise in a few places, including leaving out the under-seat USB socket that comes as standard on the bigger models and is an accessory for the Sixty2, even this most entry-level of Bolognese bikes is still not especially cheap to produce.

It’s just £800 less than the cheapest bigger Scrambler, which can also be restricted for A2 use, provide much more go for the extra money and be converted back to full power afterwards. Meanwhile, cash-conscious younger riders might conclude that there are cheaper alternatives that work just as well.

Three things we love about the Scrambler Sixty2…