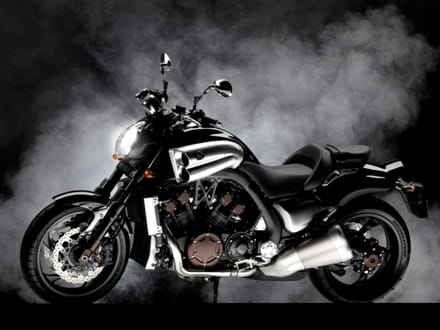 When it first muscled on to the scene in the States in 1986, the Yamaha VMax motorcycle didn't just rewrite the rulebook, it tore it up and threw it away. An instant cult bike it was a hard act to follow, which would explain why it's taken them almost a quarter of a century to produce a new Yamaha V Max custom.

Blending the latest technology with the iconic styling of the original Yamaha VMax 1200cc is no easy task, but Yamaha have succeeded in spades, keeping all the brute beauty of the original engine-focussed looks while adding all the whistles and bells to propel the monster into the 21st century.

Although it's unlikely you'll experience the top flat-out power of the Yamaha V max, UK speed limits being what they are, it's good to know the possibility's there! And the ground clearance, brakes, and suspension are far from track ready. But then track tests are not what this bruiser is all about. This is a bike for the open road and the adrenaline rush of real riding.

Yamaha have kept faith with the spirit of the original ground breaking bike, right down to the hand-finished aluminium intake covers, while subtly adding in new and equally revolutionary features. The digital information centre provides a huge array of statistics, from throttle position to miles per gallon, as well as that all important stopwatch.

So does the heart-stopping performance justify the heartache of the huge price tag and the top bracket motorbike insurance quote that will inevitably come with it? It depends on where you're sitting. From the saddle, seeing heads turn and eyes stare as the rubber burns and faring gleams, hearing this impressive motorcycle's monster voice growl and roar as it springs into action, it's worth every single penny. And while Bennetts can't help you with the salary-sized price tag, at least our Yamaha Bike Insurance quote could keep your extra costs as low as possible.